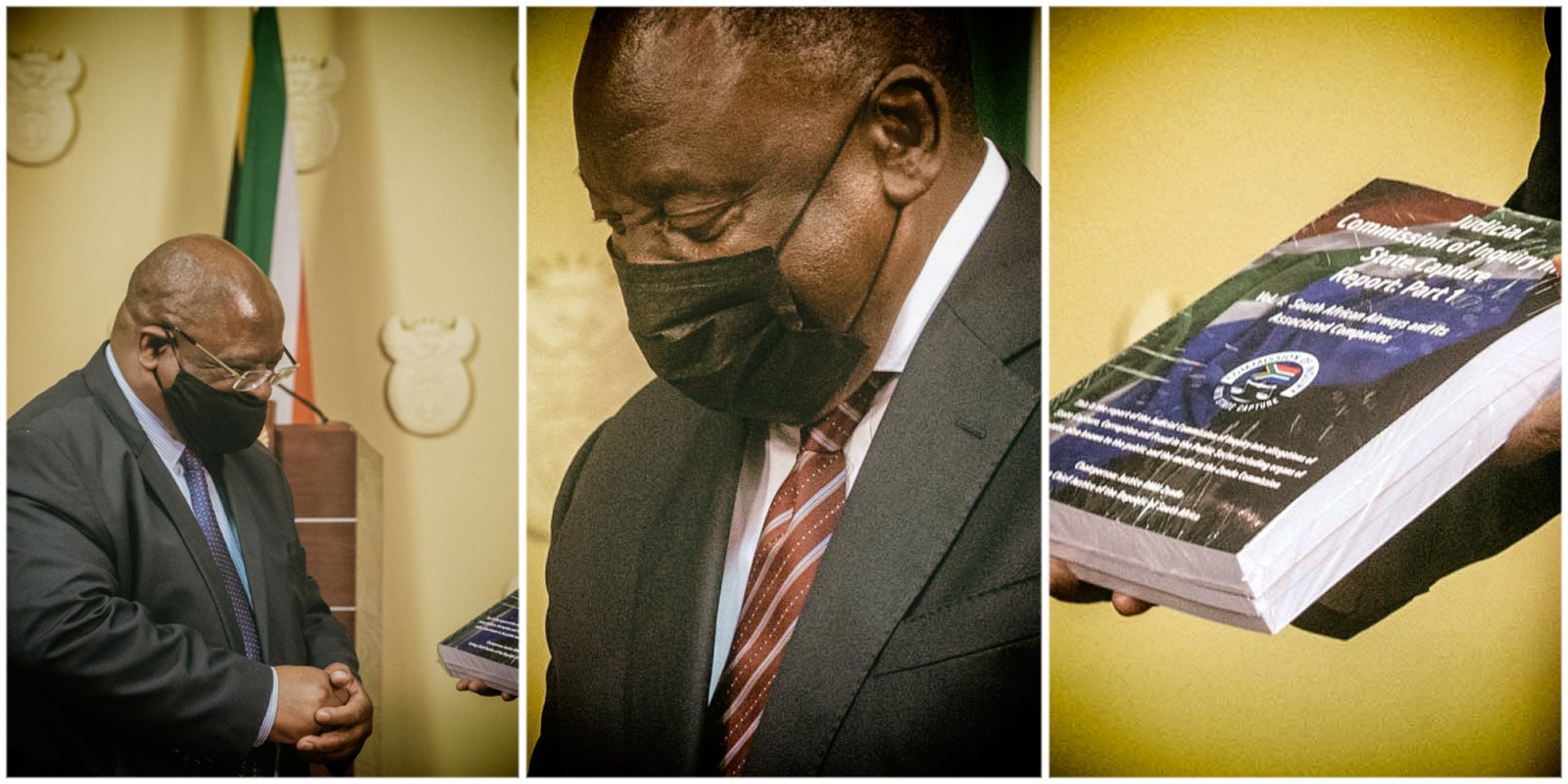 President Cyril Ramaphosa receives the first part of the report of the Judicial Commission of Inquiry into Allegations of State Capture from the commission’s chairperson, Acting Chief Justice Raymond Zondo, at the Union Buildings on 4 January 2022. (Photo: Alet Pretorius)

The interim board of South African Airways has committed to break from its unsavoury past, which was exposed in the first part of the State Capture Commission report, and will take ‘whatever actions [are] required to recover any assets lost or monies misappropriated from SAA’, it said on Monday.

The interim board has also committed to “immediately” implement the findings and recommendations of the report “throughout all levels of the company” in order to “foster a culture of transparency, accountability and ethical conduct within the SAA group”.

“Guided by appropriate legal counsel, the board will cooperate with and support law enforcement agencies in their pursuit of prosecutions, and where necessary will institute internal investigations and disciplinary processes with the aim of cleaning the company of all vestiges of its shameful past as exposed in the commission report,” said the national carrier.

The first part of the three-part final report of the Commission of Inquiry into Allegations of State Capture, Corruption and Fraud in the Public Sector Including Organs of State was released last week. The looting frenzy at SAA and its associated entities – under the chairmanship of Dudu Myeni – took up 447 of the document’s 874 pages.

As noted then by Daily Maverick, the report painted Myeni, a close personal friend and political ally of former president Jacob Zuma, as a negative force bulldozing her way through the state-owned entity for her benefit and the benefit of other connected managers, businesses and Zuma’s eponymous foundation.

Myeni was said to have intimidated board members and staff and to have acted with “corrupt intent” throughout her almost five-year term. She was painted as paranoid, meddling and incompetent. Even at her appointment, Myeni had been an “underperforming board member”, according to the report.

This is the first comprehensive statement SAA has released about the contents of the report. When asked by Daily Maverick for comment on several questions last week, the national carrier replied with a rote response, saying it was studying the huge document.

SAA said on Monday was still reviewing the report “systematically”.

Acting Chief Justice Raymond Zondo – who chaired the commission and was armed with a team of advocates, researchers, investigators and support staff – was privy to the testimonies of more than 300 witnesses over the 400 days that the commission – six times extended – ran its course.

Zondo further said in the report that just shy of 1,500 individuals and entities were implicated during proceedings.

He found that Myeni and closely aligned board members “created a climate so intolerable for many personnel that they left the airline or were forced out only to be replaced by more pliant employees”.

Myeni proved to be a belligerent witness when she appeared before Zondo.

She refused to answer questions on the basis of privilege against self-incrimination, pending civil proceedings, or because the questions made her “uncomfortable”. She also skipped an appearance, saying this was due to a misunderstanding.

Despite the appalling record of governance at SAA throughout her tenure, Myeni retained her position until she was forced out in late 2017. The airline was placed in business rescue in December 2019, a process that it exited in April 2021.

Besides its findings on Myeni, the commission also noted that other senior managers, including Yakhe Kwinana, one-time chairperson of SAA Technical SOC Limited (SAAT), was a negative and destructive force at the national carrier.

It was during the tenure of both women, according to Zondo, that there was a “steady decline in the quality and effectiveness of the governance of SAA from 2012 onwards”.

In its statement on Monday, the interim board – appointed on 8 December 2020 – highlighted that the new board and executive management comprises “professionals who were specifically selected on the basis of their non-association with the past of SAA”.

In May 2020, Myeni was declared a delinquent director for life by the Pretoria High Court, in terms of the Companies Act. The suit was brought by civil action group OUTA and the SAA Pilots Union. DM