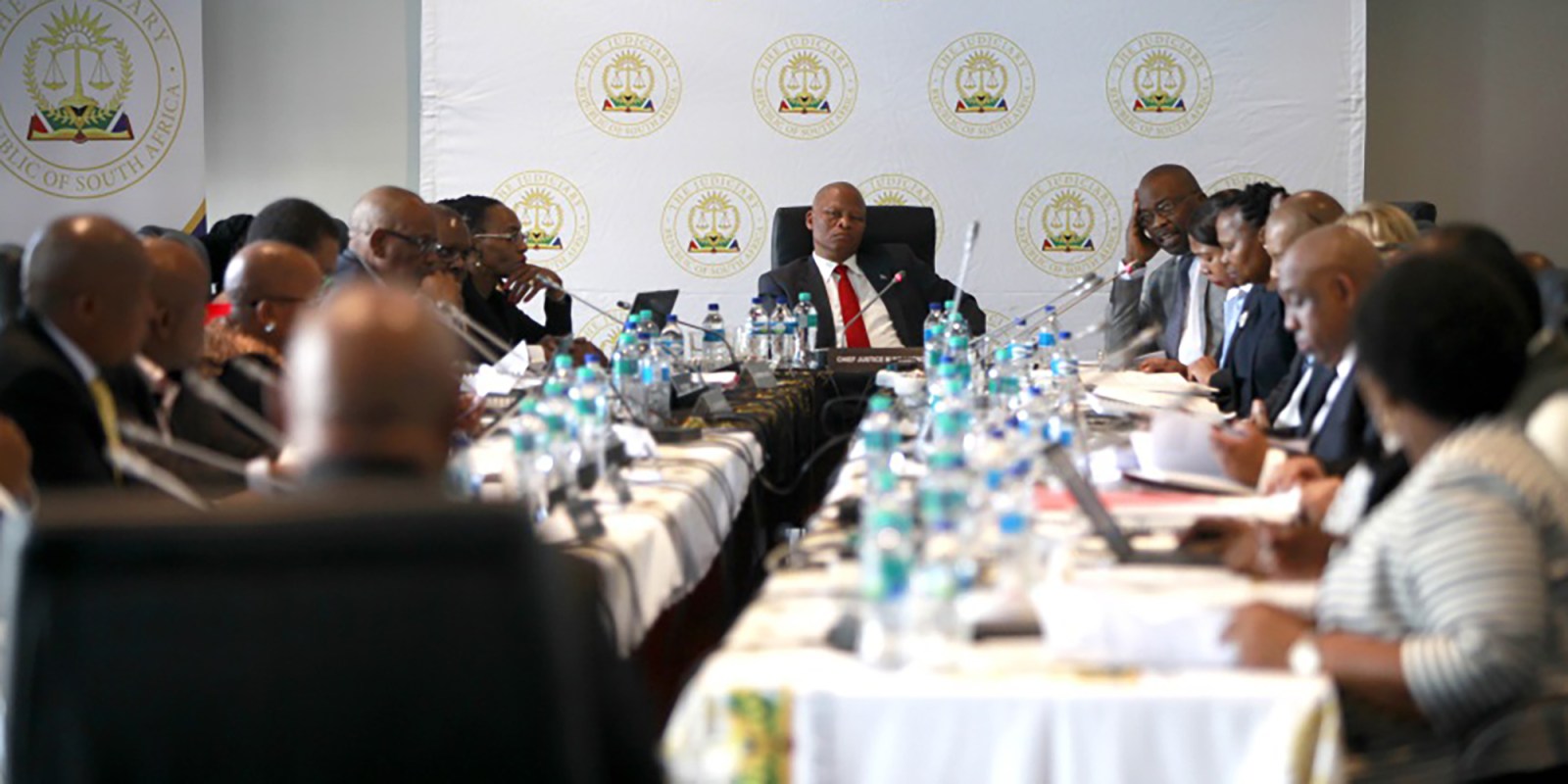 The first step is a set of clear, publicly available criteria that will guide the shortlisting, interview and deliberation processes of the Judicial Service Commission.

During his testimony as ANC president at the State Capture Commission, President Cyril Ramaphosa spoke about how the ANC deployment committee would recommend judges for different courts. The minutes from the ANC’s meeting have now emerged.

The meeting Ramaphosa was referring to took place on 22 March 2019 (nine days before the Judicial Service Commission (JSC) sitting of 1-4 April 2019). From the minutes, it seems that the then justice minister, Michael Masutha, briefed the ANC on the candidates for the different courts (including the Constitutional Court) and there were recommendations made by the ANC deployment committee on its preferred candidates.

As we said in an earlier comment (see here), parliamentary representatives on the JSC being given instructions on judicial appointments from the ANC’s deployment committee, and then voting accordingly, was not the intention of the drafters of the Constitution. Although other political parties may caucus on their proposed candidates as members of Parliament, only the ANC has been named as using a high-level political structure to do so, and then instructing members of the JSC accordingly. The JSC’s processes should be reformed to reduce this influence.

Reforms to the JSC to reduce political influence

The first step in reforming the JSC to reduce the influence of political parties in the appointment of judges is to develop a clear, publicly available set of criteria that must be applied by the JSC during its shortlisting, interview and deliberations process.

Having a set of criteria ensures that there will be a uniform standard to measure the appointability of each candidate to the Bench. The process can also be greatly improved by the JSC giving reasons (with reference to the set of criteria) why a particular candidate was appointed or was not appointed. There needs to be a rational connection to the qualities that a candidate possesses (or doesn’t possess) and the decision the JSC ultimately took on their appointment or non-appointment.

The debate about the role of the ANC’s deployment committee will inevitably provoke questions about whether it is appropriate for elected politicians to be represented on the JSC. We do not think it wise at this stage to amend the Constitution to completely remove public representatives on the JSC, so long as they do their job, which is to represent the public’s interests and not only those of their political parties.

It is therefore crucial that the politicians on the JSC bring an open mind to the interviews and are able to vote for different candidates depending on the information that may emerge before and during the interviews.

The evidence of the ANC deployment committee’s influence

The DA, in a statement released on 4 January 2021, criticised the JSC for not acting independently in deciding the judges that were appointed in the April 2019 round of the JSC (to which the ANC’s minutes are relevant). The DA accused the JSC of being a mere “rubber stamp” of the ANC’s deployment committee. The full facts suggest that this claim might be exaggerated as most of the ANC’s recommendations did not succeed, and only those where the president, an ANC politician, had lawfully authorised constitutional discretion. Let’s look at some of them.

In April 2019 there were two vacancies on the Constitutional Court and six candidates were shortlisted. The ANC’s deployment committee had initially considered Justices Majiedt and Tshiqi to recommend, but this later changed to Justices Kollapen and Tshiqi. The JSC interviewed all six candidates and recommended five. Ultimately, the president appointed Justices Majiedt and Tshiqi. Kollapen was not appointed in 2019, although he has since been appointed following the long-delayed rerun interviews held in October 2021.

Here, it’s important to emphasise that the president, with or without a deployment committee recommendation, ultimately has discretion on who to appoint to the Constitutional Court.

The post of Deputy President of the Supreme Court of Appeal (SCA) was up for interview. Again, it’s important to emphasise that the president has the ultimate discretion on who to appoint in this position.

In February 2019, a month before the ANC deployment committee meeting, the president had nominated Justice Xola Petse as the sole candidate for Deputy President of the SCA. He was therefore the only person shortlisted for the JSC interview, at which he was successful.

Therefore, the fact that Justice Petse was also recommended by the ANC’s deployment committee seems to have a peripheral influence on his appointment as Deputy President of the SCA.

The labour courts had gone for some time without a Deputy Judge President (which still remains the case to this day). Two candidates were shortlisted for the position: Judge Edwin Molahlehi and Judge Andre van Niekerk. The ANC deployment committee had recommended Molahlehi, who was the former ANC mayor of Mogale City (Krugersdorp, Gauteng) in the late 1990s before going into private legal practice and subsequently becoming a labour court and high court judge for more than a decade (judges resign political party membership on appointment).

In a strange twist, the JSC cancelled the interviews for the Deputy Judge President of the labour court position and has yet to advertise them again. So, the ANC’s recommendation was never carried out.

Both candidates had had several bruising interviews for the same position in the past, and the situation was tense. Pakati’s 2017 interview revealed serious tensions within the Northern Cape court about the position. By that time, Phatshoane had already emerged as a frontrunner. The ANC deployment committee had also recommended Phatshoane for the interview. (It is also interesting to note that when interviewed for the position in April 2017, Judge Phatshoane was asked numerous questions about her conviction of ANC politician John Block, which could have created the impression that ANC commissioners were opposed to her appointment. Two years later, however, this was evidently not the case).

But again, in a strange twist, the JSC decided not to appoint either of the candidates and the position was left vacant. Ultimately, Pakati left the Northern Cape and transferred to the Eastern Cape. Judge Phatshoane was the only candidate in the April 2021 interviews, when the JSC sought to fill the DJP position. She was successful.

The minutes of the ANC deployment committee do not recommend any candidate and only say “one candidate” for one vacancy in the Eastern Cape High Court.

Two magistrates were shortlisted; both performed poorly in the interview, the JSC recommended neither and left the position vacant.

The minutes from the ANC’s deployment committee meeting are shocking in the brazen way that they discuss appointments to strategic positions in the government and other important institutions like the judiciary, Chapter 9 institutions and state-owned companies.  The general public is right to be outraged.

However, it’s important that we also pay close attention to the evidence said to support claims of deployment. There is no reason for any of the judges appointed in the April 2019 round of JSC interviews to resign from their positions because the JSC seems to have acted contradictory to or at least independently of the ANC deployment committee’s wishes. Nevertheless, serious reforms need to be made to the JSC’s processes to reduce the unwarranted influence of political parties. The first step is a set of clear, publicly available criteria that will guide the shortlisting, interview and deliberation processes of the JSC. DM

Daily Maverick was informed on Thursday by ANC legal adviser Krish Naidoo that the minutes were incorrectly released, in circumstances that are still unclear, as the ANC continues to challenge the DA’s legal application pushing for the release of these minutes. There is, however, no reason to doubt the legitimacy of the minutes.

Alison Tilley is coordinator and Mbekezeli Benjamin a research and advocacy officer at Judges Matter, an independent transparency project that monitors the appointment of judges, their discipline for misconduct and the governance system of the judiciary in South Africa. For more information visit: www.judgesmatter.co.za and follow @WhyJudgesMatter on Twitter.