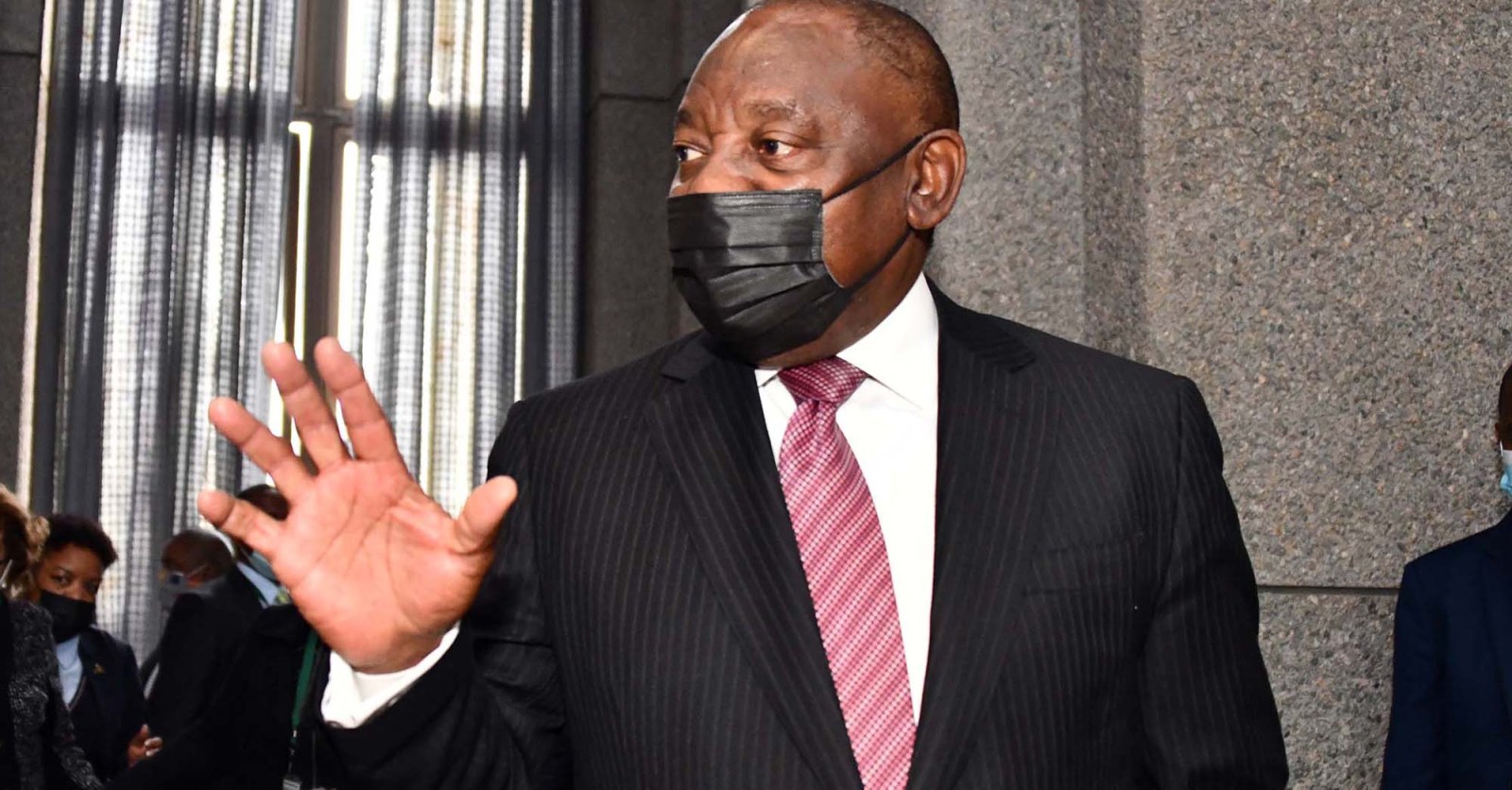 Evidence at the Zondo Commission reveals the powerful hand of Deputy President David Mabuza in how the state is shaped.

The questioning of President Cyril Ramaphosa by four evidence leaders in a marathon day of testimony at the Commission of Inquiry into State Capture has exposed how the ANC’s shadow state has come to dominate how South Africa works through a set of parallel party practices mostly obscure to ordinary citizens.

Evidence leader Paul Pretorius revealed that the ANC’s Deployment Committee is still mighty. Last Friday night, 6 August, the commission finally received some minutes of the committee which had been requested or subpoenaed from the ANC, and this allowed Pretorius to piece together key evidence.

“Certain themes arise from the minutes and what emerges as a practice or policy [is that], in large part, the Deployment Committee decides and instructs [on key appointments].

He continued: “The minister or the appointing authority recommends [a candidate for a role] and the Deployment Committee makes a decision, and it is then communicated.”

Pretorius represented the Deployment Committee as a powerful supra-structure that overrode public appointment processes and which existed largely in the party’s shadows.

“Ministers seek permission to proceed, and the Deployment Committee grants permission. Ministers get called to account. Loyalty to the ruling party, party membership, and compliance with party prescripts is an issue relevant to the appointment,” said Pretorius.

At its most serious, the implication of this is that a parallel state exists, which accounts to the party, not to the public.

Pretorius said that some of the minutes revealed that the ANC even took it upon itself to deploy judges, who are supposed to be appointed in a transparent process of nomination, interview, and shortlisting by the Judicial Service Commission (JSC) before being appointed by the president on the recommendation of the JSC. Pretorius said the minutes showed that the practice continued.

“To 2021, final and binding commitments are made by the Deployment Committee and imposed on the appointing authority (government departments, state-owned enterprises, or state agencies and other public entities),” he said.

The Deployment Committee is now headed by Deputy President David Mabuza, who has complained when key positions do not go through his committee. Ramaphosa said in his testimony in April that the committee had called him to account to it when he made appointments without getting them checked by Mabuza and its other members.

It is likely that the appointment of axed defence minister Nosiviwe Mapisa-Ngqakula as Speaker of the National Assembly this week came through the Deployment Committee even though Ramaphosa has taken heat for the face-saving cadre swop-out with Thandi Modise, who is now defence minister.

Ramaphosa defended deployment, but repeatedly insisted that, “for government positions, in the end, the legally mandated process must be followed”, adding: “it’s not an appointing committee, it’s a recommending committee”. He said deployment was important to achieve social ends like gender equality and that the ANC could not appoint judges.

“The party is where the power resides, [but] it is only one of the actors in our democracy,” he said. On the appointment of judges, Ramaphosa sought to downplay the party’s power, especially over judicial appointments, telling acting Chief Justice Raymond Zondo that, “The Deployment Committee notes there is a vacancy or two. Having done that, it knows that it is not the appointing structure.”

Until now, the Deployment Committee’s methods, power, and processes have been opaque, leading to the notion of a shadow state operating out of the field of public scrutiny or accountability.

“To remove this shroud of secrecy, the party should show its hand. Political parties do have their preferences. Maybe we need to grow up and see if the political process has matured,” said Ramaphosa, referring to the partisan US model of judicial selection. He said that the appointment of Shamila Batohi as the national director of public prosecutions was done by a public process, which he said should govern senior state appointments.

While Ramaphosa said he had recommended Brian Molefe for the role of Eskom CEO (on secondment from Transnet), he said he was not aware of the outsized influence of the Gupta family in making appointments to the Eskom board.

While the revelations about the Deployment Committee are the most obvious example of the ANC shadow state, another example is the war rooms that the government uses to deal with the energy crisis and with Covid-19. The now-disbanded National Coronavirus Command Council was another example of an opaque governing process displacing public policy-making.

Ramaphosa faced extensive questions about how the Eskom war room operated when he was deputy president and why he (and not the board) had recommended that Tshediso Matona be replaced as the utility’s CEO in March 2015.

In the period of State Capture and when he was deputy president from 2014, the shadow state was in overdrive, and during that time Ramaphosa was excluded by his political principal, former president Jacob Zuma.

Asked whether he knew about a Durban meeting in March 2015 with Zuma, his political doppelganger Dudu Myeni and Eskom chairperson Zola Tsotsi where they decided to fire key executives and replace the board, Ramaphosa said: “No, I was not aware of this meeting. I got to know about the suspensions in the media. They were suspended, and they were gone.” Asked if Zuma should have informed him, he said, “I was surprised that the president did not bring me into the loop. It just happened.”

While Ramaphosa said he had recommended Brian Molefe for the role of Eskom CEO (on secondment from Transnet), he said he was not aware of the outsized influence of the Gupta family in making appointments to the Eskom board.

Evidence leader Pule Seleka told the president that businessman Henk Bester had testified that Gupta lieutenant Salim Essa had told him, “We will show you how powerful we are: we have decided that Mr Brian Molefe is the next boss of Eskom,” a long time before the appointment.

Ramaphosa replied “This is very complex. I think it was a coincidence [that he had recommended the same executive].”

Layers and layers of shadow systems and networks emerged in other evidence too. Leading evidence about the capture of Prasa, advocate Vas Soni drew Ramaphosa deep into the testimony of its former chairperson Popo Molefe. He asked why the top six members of the ANC had done nothing when Molefe told them about an attempt to torpedo the board led by former CEO Lucky Montana, with the assistance of ANC members at Parliament and with the acquiescence of then-transport minister Dipuo Peters.

Soni focused on how R79-million from a passenger rail contract at Prasa had been diverted to fund the ANC — a revelation the party had never dealt with. The questions implied that Popo Molefe had been hung out to dry because he had come too close to destabilising the unholy trinity between state-owned companies, tenders and party funding.

“It is highly inconceivable that we would have hung Popo Molefe out to dry so the board could collapse,” said Ramaphosa. But that is exactly what happened, and the passenger rail system in South Africa remains largely dysfunctional. (Molefe is now the Transnet board chairperson.)

“The Prasa issue is depressing. One of the things I don’t understand is how it was possible for five years there would be no permanent CEO appointment,” said Zondo. All Ramaphosa could offer by way of reply was that he had started a State-Owned Enterprises Council, which is meant to oversee governance and has a computer “dashboard” that can reveal vacancies, numbers, and other key data as a transparency and governance tool.

At many points of his testimony, Ramaphosa lapsed into platitudes. “The process you are involved with [the State Capture Inquiry] has galvanised us to start acting properly and correctly,” he told Zondo. Later, he said: “All the mishaps and things that we didn’t do properly are now being done properly and will be done properly.” He admitted to being left out of many key decisions Zuma had made as he ran the government from everywhere except the Union Buildings.

The shadow state, as outlined here by the country’s leading academics, refers to systems being repurposed to suit patronage networks. It continues to swirl around us. The ANC Deployment Committee is more powerful and organised than before, while whistle-blowers say some state-owned enterprises like Prasa are in the second capture phase.