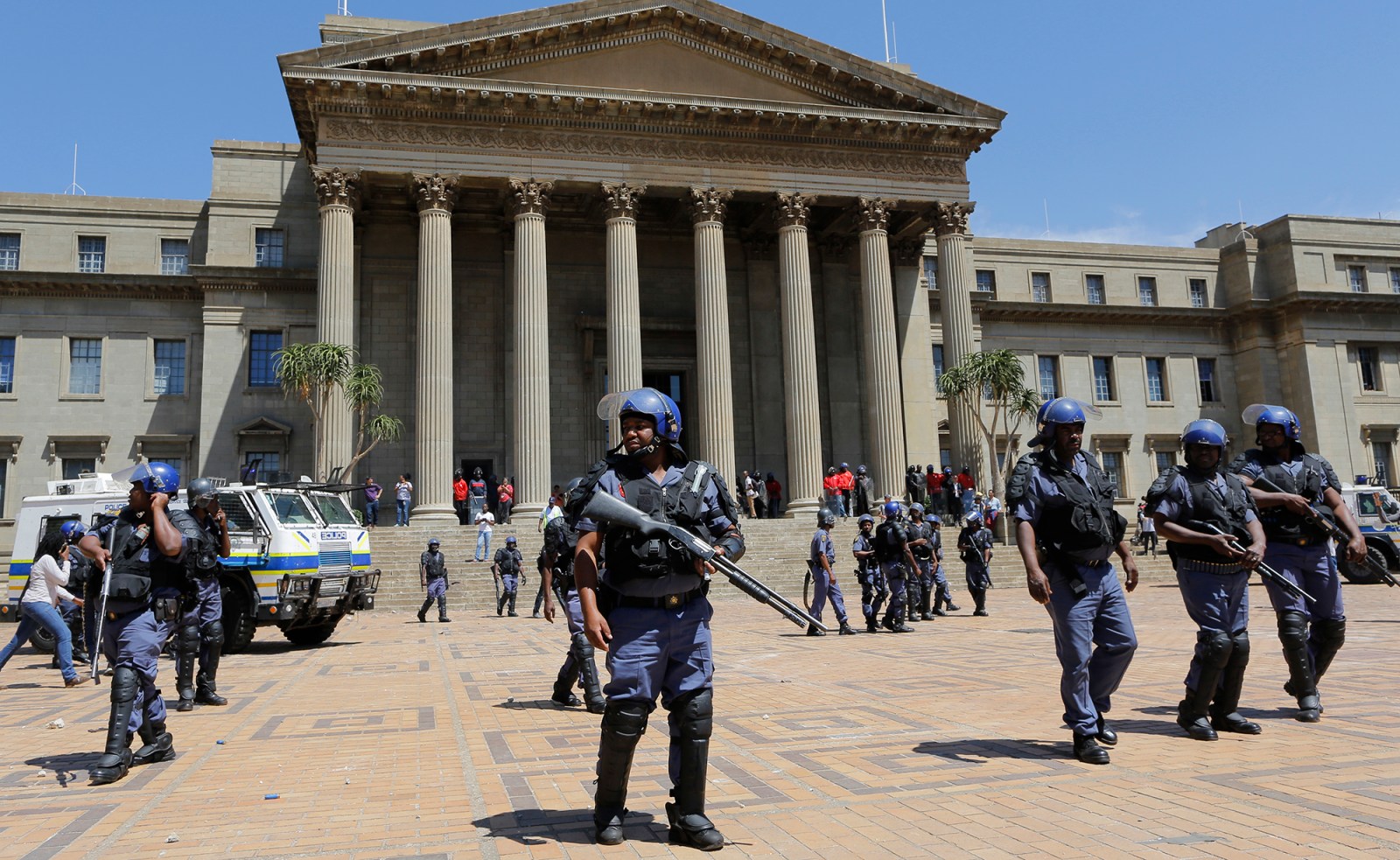 epa05581228 South African police forces members patrol the Wits University campus during ongoing clashes with #feesmustfall students during the 4th week of protests against the cost of higher education in Johannesburg, South Africa, 11 October 2016. The ministry of education announced an eight percent increase of university fees following calls by student demonstrators of a zero percent increase. The violent protests have spread to many of the countries higher education campuses and have continued for four weeks. EPA/KIM LUDBROOK

Parliament has heard that better planning and clear accountability are needed around issues of higher education – before protests erupt. A joint committee meeting was called between oversight committees on higher education and police to discuss police misconduct against students during fee protests.

South Africa has been rocked by fee protests since #FeesMustFall protests of 2015. In March, after more violent protests, a meeting was called between higher education and police. In one instance, a bystander, Mthokozisi Ntumba was walking out of a surgery office when he was shot dead by police.

During Friday’s meeting between students, university, police and industry representatives, it was clear that there was a lack of communication between the groups. Sibusiso Chalufu from Universities South Africa told the meeting that a campus safety and security task team had been set up but it had “fizzled out”.

Higher education oversight committee chairperson Nompendulo Mkhatshwa – who was one of the leaders of the 2015 fee protests at Wits – questioned the engagement between university management, student leaders and police during protests. She urged all the bodies – including student leaders – to communicate better with each other, before situations led to protests. This included negotiation and mediation efforts, especially since tertiary institutes are spaces for debate.

South African Union of Students president Yandisa Ndzoyiya on several occasions insisted the body did not support violence on campus – “from the smallest stone”. He said property damage affected students too when accommodation, building, libraries were burnt. These instances of property damage “reverses gains movements want to make”. He blamed university management for failing to engage with student leaders.

Ndzoyiya suggested that mandatory Covid-19 vaccinations were likely to cause friction in 2022. He said student leaders who attend meetings on this issue feel “when they leave those meetings, they feel like they haven’t been thoroughly engaged” on this issue.

Ndzoyiya said university management and student bodies needed to engage constructively and that the government should be allowed to mediate between the parties, when things go wrong. But, he wanted police to remain off campus, as campus security and students understand each other better than police.

Mkhatshwa cautioned against police having access to campus, as  “bringing police onto campus would be agitating”. She explained that there were fears that police do not protect sectors of society, including women and the LGBTQ+ community. “You are essentially militarising and securatising institutions of higher learning,” she said.

Mkhwatsha called for a report by the Department of Higher Education on the state of students and why student protests occur. She said the department needed to ensure there was a memorandum of understanding in place between police and tertiary institutions.

During the meeting, it emerged that there would be a campus safety summit – between students, police and those interested in student affairs – although no date had been scheduled.

Both committee chair of police Tina Joemat-Pettersson and Mkhatshwa agreed they should meet again, with gender-based violence and femicide at tertiary institutions at the top of their list. DM