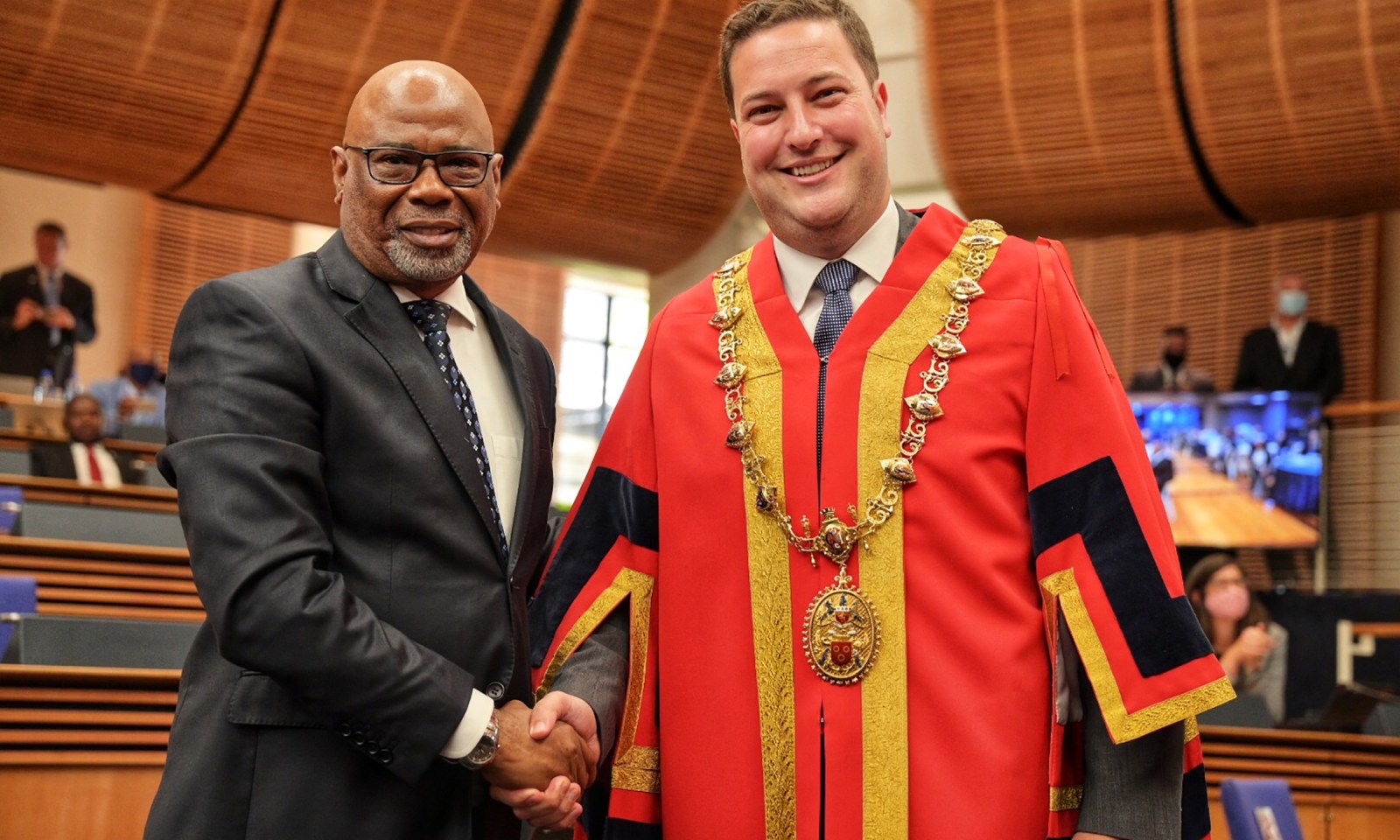 Sorting out Cape Town’s ongoing sewage spills is a top priority for Geordin Hill-Lewis, who donned the mayoral chain on Thursday while other metropolitan municipalities in South Africa continued to haggle over coalition governments.

With the DA having obtained 58% of the vote on 1 November, Geordin Hill-Lewis was on Thursday elected Cape Town’s executive mayor by 141 votes out of 224 ballots returned from a council in which his party holds 136 seats.

Former Springbok Eddie Andrews, who has been a ward councillor in Mitchells Plain, was elected deputy mayor, while alderman Felicity Purchase was re-elected as Speaker.

In his 20-minute acceptance speech, 34-year-old Hill-Lewis said the local government would serve the city “with a clear higher purpose… to restore hope in South Africa by turning Cape Town into living proof that we can roll back poverty”.

After issuing what may be seen as a warning to some established executives and Mayoral Committee members by stating “more of the same isn’t going to cut it”, he announced a R600-million increase for the allocation of free basic services to indigent residents, from the current R3.1-billion to R3.7-billion, before taking aim at Cape Town’s sewage problem.

“It is not possible to restore hope and dignity to our communities while sewers are overflowing,” he said, and announced his first day in office would involve a visit to Khayelitsha and the Joe Slovo settlement in Milnerton where sewage runs down the streets.

Shortly after his speech, the city emailed invitations to the media to accompany Hill-Lewis on his inspection.

Since July, Cape Town has faced the unprecedented situation of having all its main recreational vleis and estuaries closed to the public because of health risks caused by sewage pollution. Rietvlei, a tourist attraction and economic hub for the boardsailing industry, was reopened only on Wednesday, 17 November after being closed by the city on 24 June.

Hill-Lewis said it was accepted that sewers would occasionally block and pump stations would break down, but when such problems were reported they needed to be attended to promptly, and if the problems took time to resolve, the city needed to provide an explanation to residents.

The city had to join hands with committed residents and active communities who were prepared to help build the Cape Town of the future, he said, pointing out Milnerton Central Residents’ Association environmental head Caroline Marx in the public gallery as an example of the “critical role” engaged citizens could play.

Marx has spearheaded civic engagement with the longstanding pollution of the Milnerton Lagoon, which has resulted in a directive being issued to the city by the provincial environmental inspectorate, the Green Scorpions.

“He caught me by surprise with that comment,” Marx said after the council meeting.

She said she had first alerted Hill-Lewis, who lives in Edgemead, about the pollution of Milnerton Lagoon when she invited him to attend a ratepayers’ meeting in 2017 as a parliamentary constituency representative. She said he was sympathetic and could not understand why the city was not sharing the results of its monthly water quality tests with the public, but could not intervene as he was a member of Parliament and not in city governance.

Transparency within City Hall was an issue Hill-Lewis touted throughout a speech in which he also punted economic growth through infrastructure building and construction, to keep pace with a growing population. He reiterated his desire for pouring concrete, made at the launch of his mayoral campaign in Bonteheuwel in August.

On his wish-list of achievements over the next five years was a functional and integrated public transport system in which “modern trains run like major arteries through our city” — preferably operated by the province or city — while buses and taxis linked “to form the veins” that reach every community.

An end to load shedding in Cape Town, which was one of his election promises, was envisioned, although he did not elaborate on how this would be achieved.

Further, crime would be reduced through the provincial Law Enforcement Advancement Plan and modern crime-fighting technology, he promised.

In response to the new executive mayor’s statements, ANC leader Xolani Sotashe referred to the Constitution and Municipal Systems Act which instructed municipalities to engage communities in local government, and if Hill-Lewis kept his word on transparency and engagement, he would have the opposition’s full support.

But, he warned: “Once you begin to be arrogant and dismissive, then you must know you are declaring war.”

Sotashe echoed the utterances of most of the 11 opposition councillors who followed him in responding to Hill-Lewis’s speech, by saying the new mayor’s “immediate task” was to deal with the sewage running along the streets of the townships and the Cape Flats.

Sotashe said: “The ageing infrastructure requires steadfast leadership. We stand ready to work with you to resolve these problems.”

He said some of Hill-Lewis’s priorities were progressive, but the issue of land for social housing had been ignored by his predecessors. Issues brought to light in the South Africa Needs Clean Hands report released by Corruption Watch in August also needed to be dealt with, he said.

Although Cape Town fared better in the report than the City of Johannesburg, Ekurhuleni, City of Tshwane and eThekwini, it was nevertheless implicated in 125 corruption-related reports.

“We hope you will get to the bottom of this rot,” said Sotashe.

PR councillor for the ACDP, Marvin Christians, took the opportunity to push his party line that any attempt by the city to mandate Covid-19 vaccines for city staff and officials would “never take place under my watch”, while taking a swipe at outgoing executive mayor Dan Plato by saying Hill-Lewis “doesn’t have big shoes to fill”.

“We do not want a repeat of 2019 when people were promised unrealistic promises [sic] such as a provincial police service and provincial railway system,” said Christians. DM