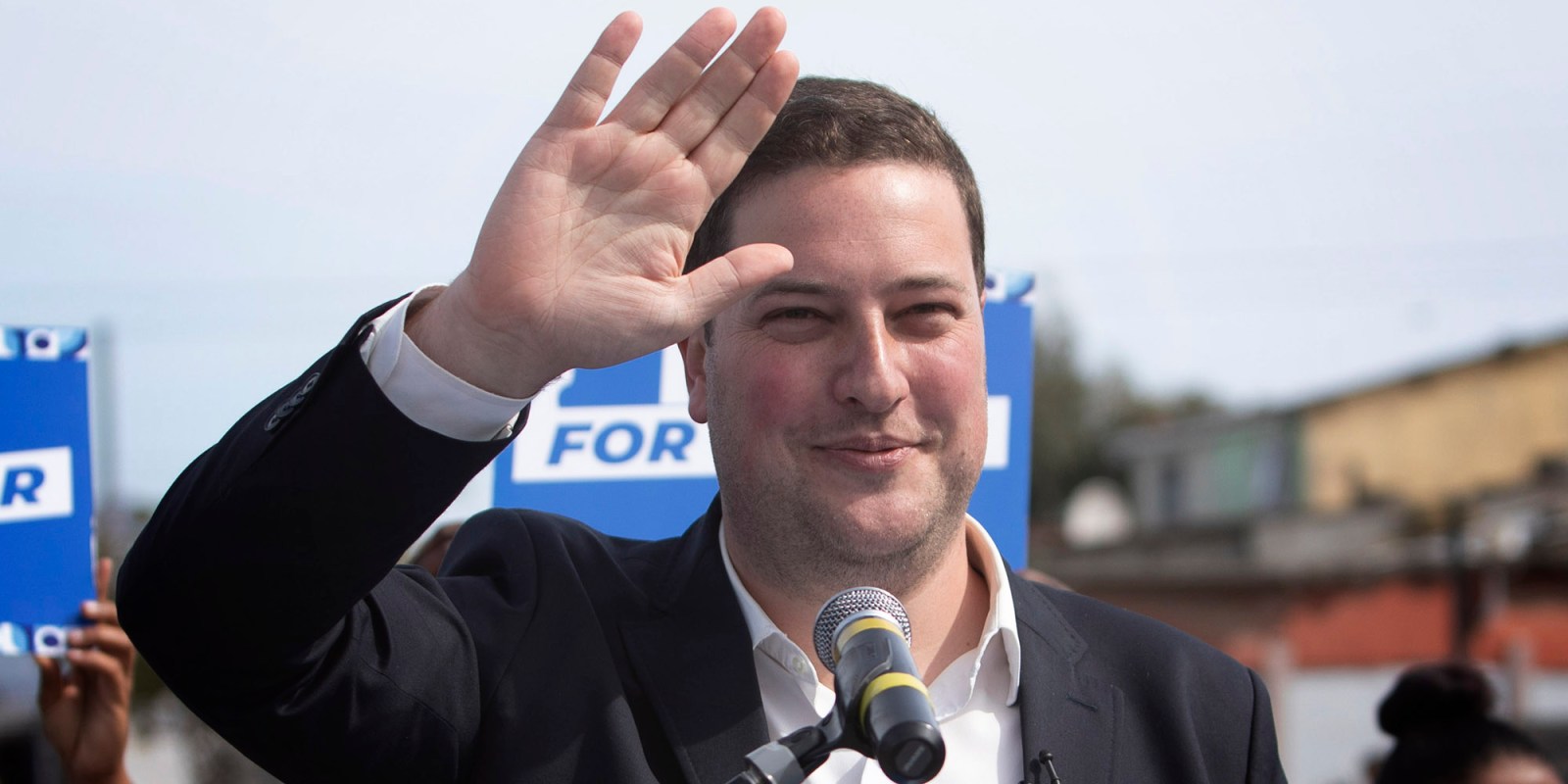 The DA’s Cape Town mayoral candidate, Geordin Hill-Lewis, says the city is South Africa’s leader in good governance, so ‘let’s use it as a policy laboratory’.

The rosy-cheeked, fresh-faced young man who is likely to be Cape Town’s next mayor looked and sounded out of place as he launched his campaign from behind a blue DA-branded lectern set up in the middle of a street in Bonteheuwel.

The street outside DA councillor Theresa Thompson’s home was chosen as Geordin Hill-Lewis’s launchpad as it was where he signed up as a DA member 17 years ago after being brought to a DA meeting by James Vos, who is a City of Cape Town Mayoral Committee member.

The 34-year-old Hill-Lewis looked like fresh meat for a group of tough-looking young men, who turned out to be DA supporters. There were no police or law enforcement officers protecting the 90-minute affair attended by about 100 people in the notorious suburb, and nor were they needed.

Had Hill-Lewis launched his campaign in his home suburb of Edgemead he would probably have been criticised for pandering to the white electorate and sidelining voters of colour. As Daily Maverick’s Rebecca Davis noted, in South Africa, and Cape Town in particular, you cannot escape the optics.

Speaking to Daily Maverick after his speech, Hill-Lewis, who is an MP, agreed that the DA’s efforts to transcend identity politics were weighed down by the loss of high-profile black leaders Mmusi Maimane, Herman Mashaba, Lindiwe Mazibuko and, most recently, Phumzile van Damme.

The aspect of race was “a comfortable convenience for opponents” of the DA, he said, but no one talked about the “dozens” of black DA leaders who continued working at community level, such as Patrick Nqu in Philippi. These leaders deliver votes, said Hill-Lewis, and “that’s what people care about”. He added that he aimed to support such leaders to achieve better service delivery in their communities.

Hill-Lewis’s speech, delivered after an introduction by Vos and amusing wordplay by DA Western Cape MPL and former comedian Reagan Allen, avoided the racial optics of his mayoral candidacy. Instead, he warned against the cynical use of identity politics to divide voters, which was also an opportunity for him to point out the national government’s failures.

“The legacy of our divisive and discriminatory past, as well as the failures of the present-day national government continue to haunt Cape Town,” he said, in a delivery more dry than charismatic.

“The DA in Cape Town doesn’t sit on the sidelines to try and divide people on the basis of race or religion, we get delivery done for everyone,” along with the expected promise that as mayor he will “work day and night to bring better service delivery to every resident of Cape Town”.

Populists and “peddlers of hate” will in the coming months “tell you that you are struggling to make ends meet because of the colour of your skin, because of the language you speak, or because of the God you worship”, said Hill-Lewis, who leans on the traditional values of being a Christian and a family man.

He urged people to unite behind the DA and “not allow themselves to be fooled into blaming one another for the failures of the ANC”. Failures included load shedding, the disintegration of Metrorail, and residents on the Cape Flats being provided with the lowest police:citizen ratio in the country.

“They [the ANC-led government] do not care about the people of Cape Town,” he said.

This meant the DA had to “take the fight to the national government” and get more done in Cape Town than ever before. This entailed training and deploying more law enforcement officers, using “every tool at our disposal to fight for control over passenger rail services” and striving to “end load shedding in Cape Town”, presumably by continuing efforts to secure energy from independent power producers.

With snow on the mountains visible on the horizon, the metaphor of the DA ushering spring to a city suffering under the national government’s winter was threaded throughout his speech. One of the vehicles to usher in the promised warmth and prosperity would be to “unleash the power of the private sector to meet the enormous demand for housing in our city”. Hill-Lewis wants to see Cape Town become “one big construction site”, building a prosperous future, with “cranes going up all over vacant pieces of state-owned land in Cape Town”.

Asked afterwards if this was not at odds with the city’s own contested auctions of municipal property, he expressed the view that underutilised city-owned plots needed to be prepackaged and released for development to social housing organisations. He noted that the largest tracts of state land, such as the SANDF’s underutilised Wingfield and Youngsfield military bases, were held by the national government, and these needed to be released.

He said he may not always agree with housing activist organisation Ndifuna Ukwazi which has consistently challenged the city’s housing delivery, but he respected it and took note of “some valuable points” it had raised. He said he was “in discussion” with Ndifuna Ukwazi and shared its aim of creating more affordable accommodation for Capetonians. He intended to investigate why the housing project at Salt River Market has been held up.

Asked whether he would bring imagination and vision back to a city that seems to have returned to a dull bureaucratic approach following former mayor Patricia de Lille’s abrasive exit, he said Cape Town was South Africa’s leader in good governance, so “let’s use it as a policy laboratory”.

“If we are a world-class city we must do some big, exciting experimental things, and I don’t mind failing.”

However, he said, bold vision could only be put in place if the DA held a majority. A coalition of smaller parties would halt progress.

“If we focus on the message of what Cape Town’s future can be like, I think we can get people behind us.”

Launching his campaign in a ward in which 85% of voters supported the DA in the last local government election, it was not surprising that surrounding residents said they supported him.

At the end of the street, 21-year-old Byron Mackenzie said residents “don’t care about the DA and all that”. What they cared about, he said, was potholes being fixed, street lights working, and the streets being safe enough to kick a soccer ball around at dusk. Mackenzie said he liked the fact that Hill-Lewis was young, and believed he would get a lot of votes.

Chestnut Street resident Bradley Comjana (37) said everyone in his household voted for the DA. But an elderly woman further down the street, who declined to be named, was sceptical. Feeling betrayed by politicians, she said there was no one she could vote for.

The DA won a two-thirds majority in Cape Town at the last local government elections and it is unlikely to lose the city this time around, despite the appearance on the scene of De Lille’s Good party. DM