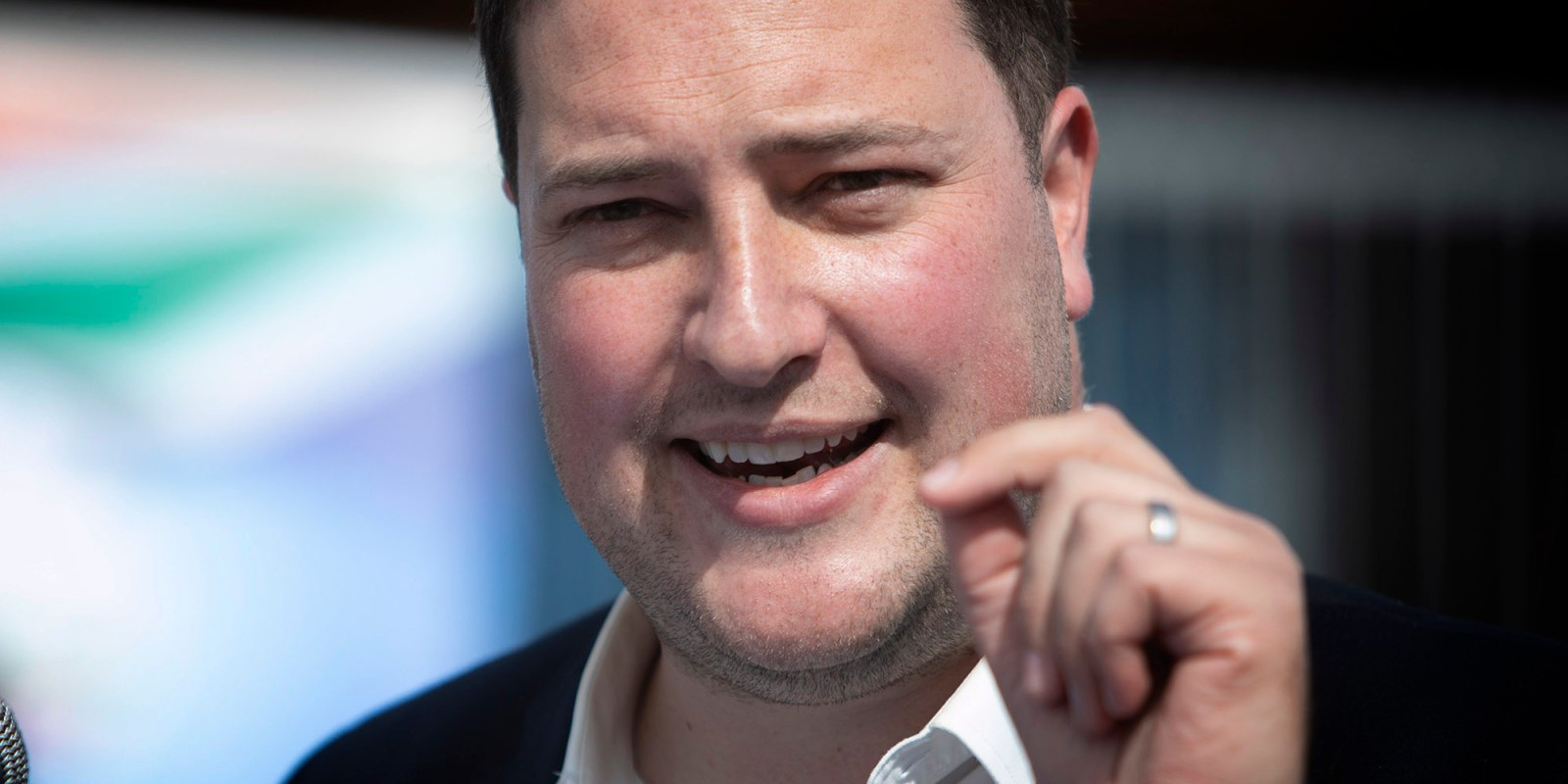 Policing in Cape Town has always taken on a DA versus ANC tone, with the city (plus province) being run by the former and the national police service the latter. Now, with the DA’s Geordin Hill-Lewis set to become Cape Town mayor and who wants the city to take over policing, ongoing tensions involving the political parties are likely to heat up yet again.

Cape Town is the Western Cape city most synonymous with gangsterism and associated violence. Among various interventions it needs to deal with organised crime, one is critical — thorough policing.

But crime fighting in Cape Town has always courted controversy — with claims of certain cops and politicians colluding with criminals.

There are also politicians who have continuously called for improved police work.

Beneath these plans, proposals, promises and criticisms, residents deal with the harsh, often fatal, reality of crime.

The DA’s Geordin Hill-Lewis is now set to take up the mayoral seat in the city and policing will undoubtedly be in focus again.

I am humbled and deeply grateful for the trust placed in me and the DA by the people of Cape Town. Together, let’s turn our beloved hometown into South Africa’s city of hope. Thank you Cape Town!#MayorGHL pic.twitter.com/ZzyxIdZMTz

More specifically, the control of policing.

The City of Cape Town is DA-run and has a metro police service, while the ANC heads the national government and therefore the South African Police Service (SAPS), the overarching umbrella body responsible for law enforcement in the country.

For years this has caused tit-for-tat sparring between the DA and ANC, with the DA saying the ANC is failing to ensure effective policing and the ANC rebutting that the DA needs to pull its weight.

The City of Cape Town has made much of its Law Enforcement Advancement Plan, described on the DA website as a programme “to recruit, train and deploy a significant number of [learner law enforcement officers] which will add capacity to the enforcement agencies in dealing with criminal activities and to stabilise the crime hotspots in the metropole”.

This is meant to bolster — or as the DA sees it, fill in the gaps left by — national policing.

The SAPS is a fraught organisation, with even the National Police Commissioner Khehla Sitole now facing possible suspension.

All this makes policing in Cape Town and the Western Cape, South Africa’s gang capital, an even more contentious subject.

Hill-Lewis has already added his voice to this arena.

He wants what the national government is opposed to — a police service run by the city.

Western Cape Premier Alan Winde has previously also indicated the desire for the devolution of the SAPS, saying in Parliament: “Devolution of power will ensure we do not become a failed state.”

He said it would not mean cutting out police, but rather working with them in a different way.

However, the Constitution allows for only one police service.

It says: “The security services of the Republic consist of a single defence force, a single police service and any intelligence services established in terms of the Constitution.”

It is this that the ANC can use to swat the DA away.

At the end of October, Hill-Lewis, in his capacity as DA finance spokesperson, announced a plan that “has the potential to revolutionise policing in Cape Town”.

He wanted R1-billion out of the R1.7-billion VIP protection budget to be channelled to “competent metros” and used for protecting residents, not politicians.

“The proposal… is part of our long-term vision to devolve policing to competent metros and provinces, so that the South African Police Service ultimately becomes the Cape Town Police Service [CTPS],” Hill-Lewis said.

“The past 27 years have proven that SAPS, which is managed from 1,500km away in Pretoria under a rotating rogues’ gallery of the corrupt and the inept, simply does not have the capacity to keep Capetonians safe.”

He pointed out, however, that there were clean, hard-working officers in the police and effectively encouraged them to one day join the DA fold.

“They should be the first to take up new posts in the DA’s devolved metro-based and provincial policing plan that must ultimately become the CTPS,” Hill-Lewis said.

But all this rubs against the ANC’s stance on policing.

Police Minister Bheki Cele, in September, did not mince his words about his view on the proposal for devolved policing.

“Therefore, the topic of the devolution of the SAPS must be weakened and paralysed. As a matter of fact, this government is forging ahead in fully implementing the ideals of the ‘single police service’ as directed by the Constitution.”

Cele then took a swipe at the DA-led Cape Town and Western Cape.

“The rogue conduct by certain metros of creating parallel structures of law enforcement aimed at undermining the Constitution cannot be left unchallenged,” he said.

“The Western Cape government continues to sabotage the efforts of adequately resourcing legitimate structures like the metro police, who serve as a force multiplier in the fight against crime. Instead, those resources are pumped to fund parallel structures which adds no value in policing.”

Law enforcement, Cele said, apparently referring to crime-fighting in a metro, was also “deployed to affluent areas with less crime, to the detriment of townships that are known to be the biggest contributors of crime in the Western Cape”.

Cele’s words about deployment also fit into a backdrop of ongoing verbal sparring over policing resources in the province.

In October, during what the police called a “ministerial imbizo” in Cape Town and what the DA labelled an ANC rally, Cele said the Western Cape was one of two provinces in the country that received the most police resources.

This caused Winde and Community Safety MEC Albert Fritz to release a joint statement saying: “Any person who lives in the Western Cape’s crime hotspots knows all too well that there is not enough SAPS support to fight crime, despite the hard work of many officers on the ground.

“It is our poorest communities, mostly in the Cape Flats, which are left with inadequate police-to-population ratios because of a failure by the national government to properly resource them.”

Hill-Lewis also released a statement, saying the DA called on Cele “to resign in disgrace after his latest insult to the victims of crime in Cape Town” so that the party could take over the policing of the city.

“While Cele continues to play cheap politics with the lives of Capetonians by cutting SAPS resources, I have already pledged to deploy hundreds of additional law enforcement officers and fight for expanded local policing powers,” Hill-Lewis said.

With backing from the likes of Winde and Fritz, he will probably continue pushing for the devolution of the SAPS.

As Cape Town mayor, he will fill a seat that has involved previous figures in the role having had some unique encounters relating to the police.

Hill-Lewis takes over from the DA’s Dan Plato, who before that was Community Safety MEC, so may have had a more nuanced grasp of crime and policing involving Cape Town and the province.

A former senior policeman once accused Plato of using dubious sources as part of a plot to discredit him, which Plato denied.

In 2007, while mayor, she was arrested (according to her, wrongfully so) in the Cape Town suburb of Mitchells Plain during an anti-drug march.

During local government elections this week, police forcibly removed her from a voting station in Gqeberha — she has lodged an assault complaint over this.

For now, while Hill-Lewis’s stance on policing is clear, it is yet to be seen exactly how the trend of Cape Town mayors clashing with cops could extend to him. DM