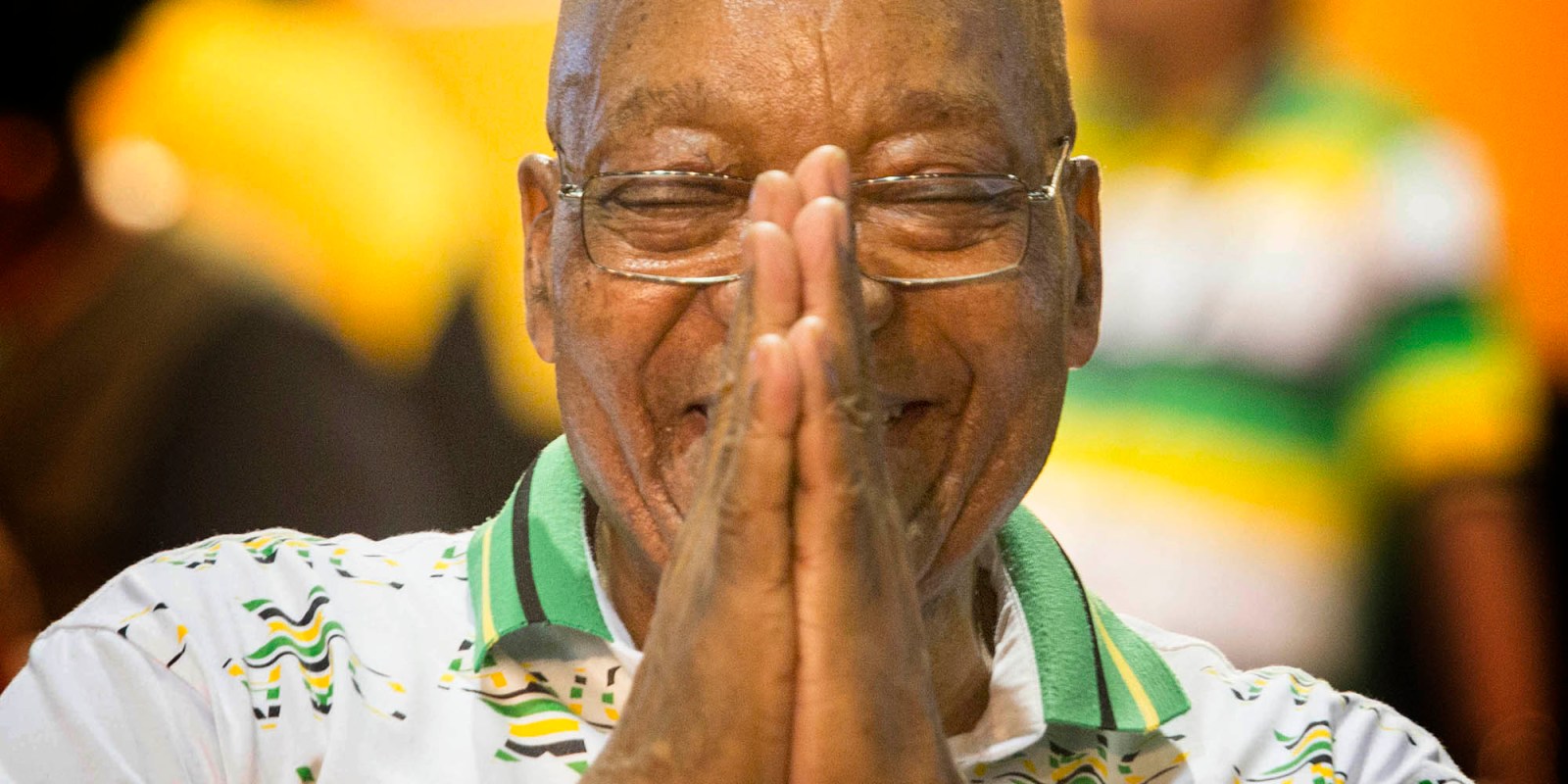 The ANC in KwaZulu-Natal is worried about what a no-show by the former president will mean for it on 1 November.

In a show of force, former president Jacob Zuma and his foundation will hold a prayer meeting to welcome him back from jail at the People’s Park, Moses Mabhida Stadium, in Durban on Thursday, 14 October.

Out of jail on medical parole, Zuma looks weak, but is not bedridden. In a video recording released by the Jacob G Zuma Foundation last week, he endorsed the ANC for the 1 November election.

The ANC in KwaZulu-Natal was worried that the party would suffer at the polls without an endorsement. Voter registration is weak across the country, particularly in KZN. Zuma’s jailing angered ANC voters in the province in July; some of the party’s rank and file organised the rioting and looting which followed his jailing.

The ANC is likely to be most affected by a stayaway vote. Of the 38.57 million people who can vote, only 26.2 million have registered to do so. Roughly half of registered voters vote on local election days, although interest in the local poll was higher in 2016.

In KZN, 5.4 million of the 7.18 million eligible voters have registered to vote on 1 November.

Zuma’s advisers know his popularity and these numbers (which are perilous for the party in its heartland province). The Radical Economic Transformation (RET) grouping will use the prayer meeting to put the former president back on the agenda. In this way it will give itself a stage since its visibility has declined. The election campaign has shifted the focus to President Cyril Ramaphosa.

Ramaphosa is the only face of the election, and his campaign programme in KZN was choreographed over the past weekend to show large crowds and acceptance on the ground. Zuma’s prayer meeting is a response and a plan to show that he is still the provincial Big Daddy.

Zuma’s foundation, with the RET faction, has put big organisation and logistics into the prayer meeting.

It was launched in the media heartland of Gauteng at Sandton’s Maslow Hotel on 8 October at a fully organised event with entertainment. The programme on Thursday will have national prayers from major church denominations to welcome Zuma back from jail. Zuma was released on medical parole more than a month ago after former Correctional Services commissioner Arthur Fraser overrode the opinion of the prison medical parole appeal board to grant a unilateral get-out-of-jail-free card.

Ramaphosa gave the release a nod and a wink, although he later tried to distance himself from the endorsement of Fraser’s decision, saying he had been informed about it while travelling. Zuma’s foundation is billing the prayer meeting as its event and it has criticised attempts by the ANC in the province to hijack it. 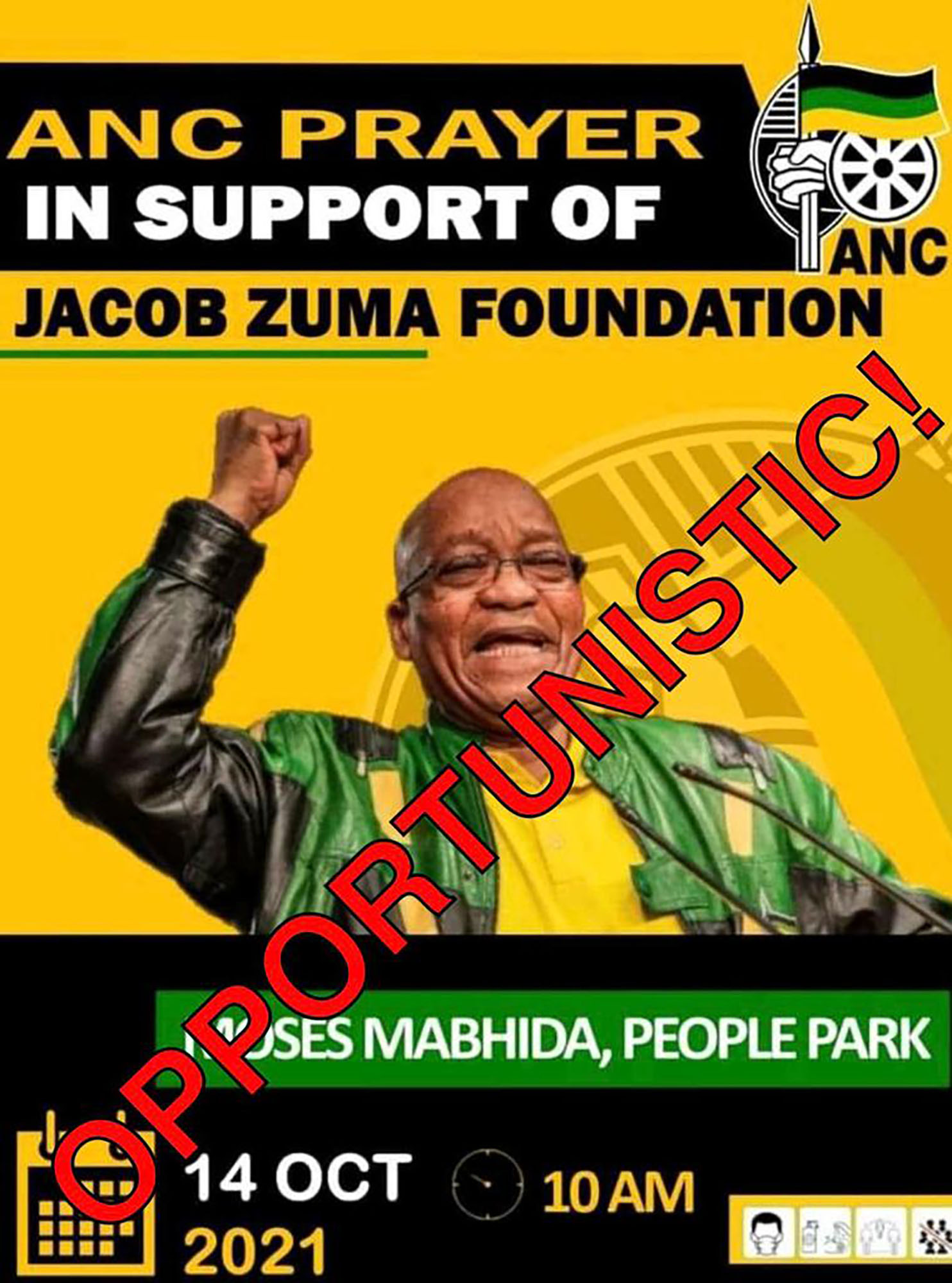 In July, Zuma was sentenced to 15 months in prison by the Constitutional Court for contempt. It is likely that he would have been eligible for parole in four months, but Fraser sprung him out in just under two, most of which was spent in the prison hospital in Estcourt.

“His Excellency, President Zuma, is loved by an overwhelming majority of the people of South Africa and all of them have been worried about his incarceration. Some were concerned that horrible things might happen to him while incarcerated,” said spokesperson Mzwanele Manyi.

In case cynics wonder about exposing the poorly Zuma to a potential superspreader event, Manyi said: “God’s atmosphere will ensure that coronavirus is blown away and not passed on between the attendees.” DM