Burnt out trucks on a road in the Sea Cow Lake area of Durban on 12 July 2021. (Photo: Gallo Images / Darren Stewart)

As KwaZulu-Natal declares a State of Disaster due to the magnitude of destruction caused by the recent rioting and destruction, ANC whistle-blowers want the party to act against implicated members.

ANC, ANC Youth League and SA Youth Congress members sent boast posts of lootings and truck hijackings at the height of the anarchy that ripped through KwaZulu-Natal and Gauteng from July 9-16.

The posts show how organisers planned mayhem on the WhatsApp groups and within the structures of the governing party. The master group was first called “Free Zuma Coordinators” and later changed to “Free Zuma Information” with satellite groups spread across different geographies.

On the smaller groups, members planned which roads or highways would be closed and where looting would occur. Then they posted back to the commanders when members had executed a plan.

Former president Jacob Zuma was imprisoned on the night of 7 July and two nights later truck hijackings on the N3 at the Mooi River Toll Plaza started the seven nights of terror that catapulted South Africa to the top of global headlines as a frenzy of riots and looting shocked the world. On that night, ANC members posted images of trucks that had been hijacked and parked across the highway in a shutdown that lasted almost a full week. 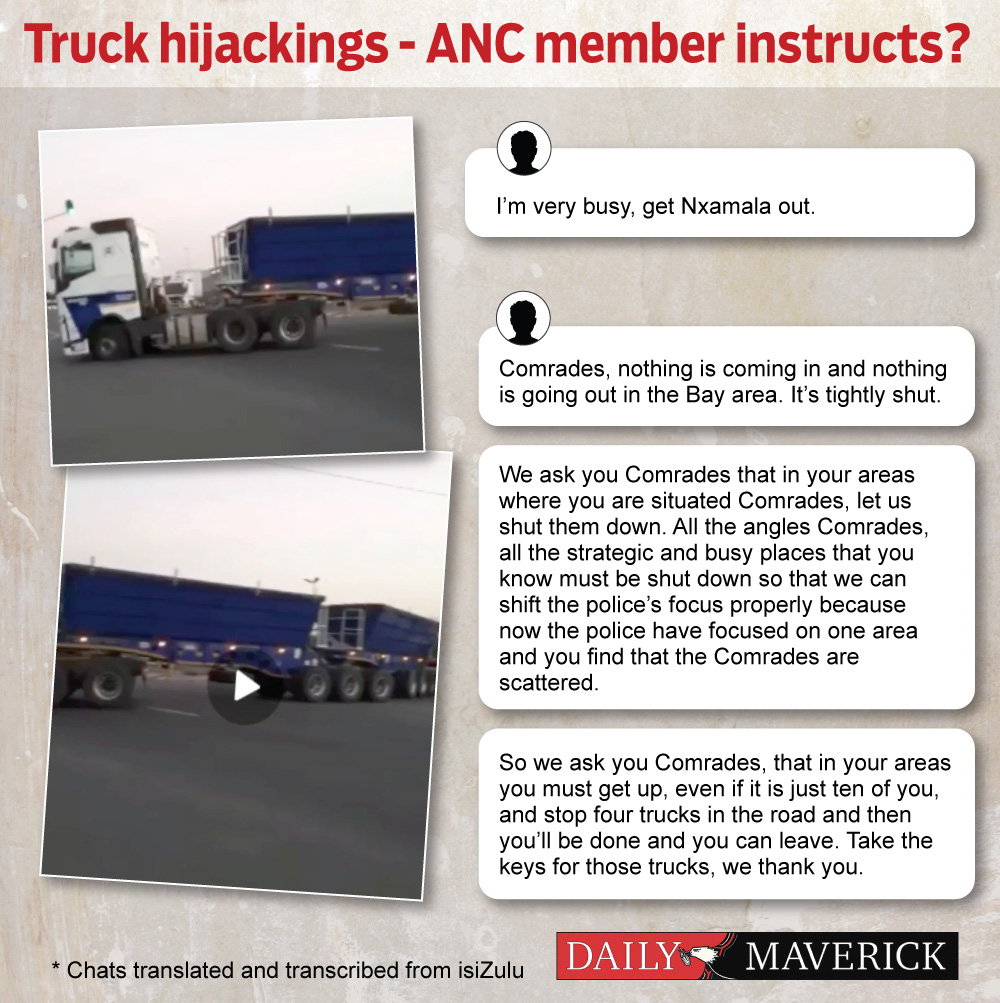 The perpetrators took videos and posted them on various groups. The graphic shows screen grabs from one of the posts. In one, an ANC member said, “Get Nxamalala [Zuma] out.” Then, he recorded that no traffic was moving on the highways, and he implored other cadres to shut down other arterial routes. “So, we ask you Comrades, that you must get up in your areas, even if it is just ten of you, and stop four trucks in the road and then you’ll be done, and you can leave. Take the keys of those trucks; we thank you,” said the recorded instruction, which they posted across groups.

ANC Youth League member Sanele Zakhele Masuku confirmed to Daily Maverick that he had posted the video, but said he had not been involved — although ANC whistle-blowers who collected the material say he is the source.

“Oh, ja, I remember posting this video, but I am not sure about the group’s name. I got it from other groups as well,” said Masuku, who confirmed that he is a member of the ANC and the ANC Youth League. “I posted in some other groups; they need to free him [Zuma] as he’s in jail. It’s not a right thing to do because he’s old,” said Masuku.

Across the groups, numerous posts of the truck hijackings and burnings were posted, some with the boasting message “we’re at it” attached to it. On social media, Masuku big-manned and posted a message translated as “Please arrest me after I close the N2”.

“If you look at the night of July 9, there was an element of planning,” says Gavin Kelly, chief executive of the Road Freight Association. He said the N3 toll gate was strategically chosen as trucks had to stop there — it was an “easy target” and that truckers there were sitting ducks who were often attacked.

“This had nothing to do with the foreign driver matter. This was about causing a congestion point at the toll gate and creating anarchy. Most reports we’ve received are that there were no attacks on drivers. It was about the impassibility of roads,” said Kelly.

Over that weekend, 250 trucks were burnt or hijacked, 45 of them on the N3 and the coastal N2 route in Durban. The rest were destroyed or damaged in retail and warehouse sites, said Kelly. Smaller attempts were made to block major highways in Johannesburg (M2 in both directions) and parts of the N4 in Mpumalanga. These were less successful.

Mall looting planned on WhatsApp and reported back 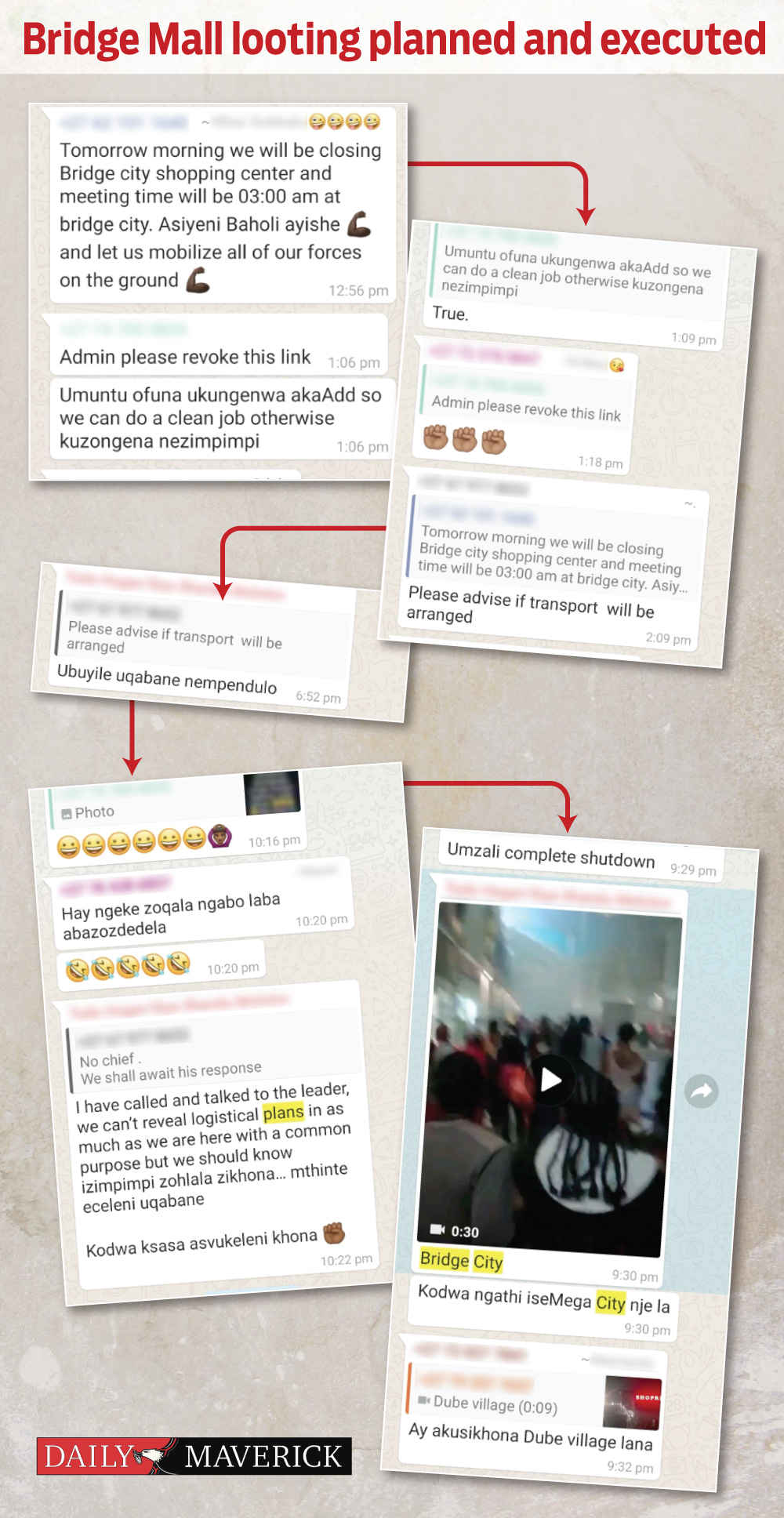 This graphic shows how the Bridge City Mall looting was planned. The planners set a meeting time of 3am, calling upon members to “mobilise all our forces on the ground”. One member asks, “Please advise if transport will be arranged.” Later, the members post the looting back to the group. Bridge City Mall is in KwaMashu, Durban, and is near a station — it sprawls over 39,000m2 and was badly damaged in the looting. It was one of the malls President Cyril Ramaphosa visited on 16 July, surrounded by a steel ring of police officers and soldiers, absent when the mall was attacked.

This shows that at least some of the looting was organised by local political activists. The language they use, like “mobilise all our forces”, is that of a political organisation. Members called each other “comrade”. The Bridge City Mall looting was probably organised by the INK WhatsApp group, one of the most active in the unrest. “INK” is an acronym for Inanda, Ntuzuma and KwaMashu.

The initial protests and looting were planned specifically as part of the campaign to free Zuma from jail, but the looting later became organic for days as the organisers lost control of the programme they had started.

By 22 July, the South African Property Owners Association reported that 100 malls had been looted, burnt or significantly damaged by fire, and about 3,000 stores looted. In Durban alone, R1.5-billion in stock was lost. 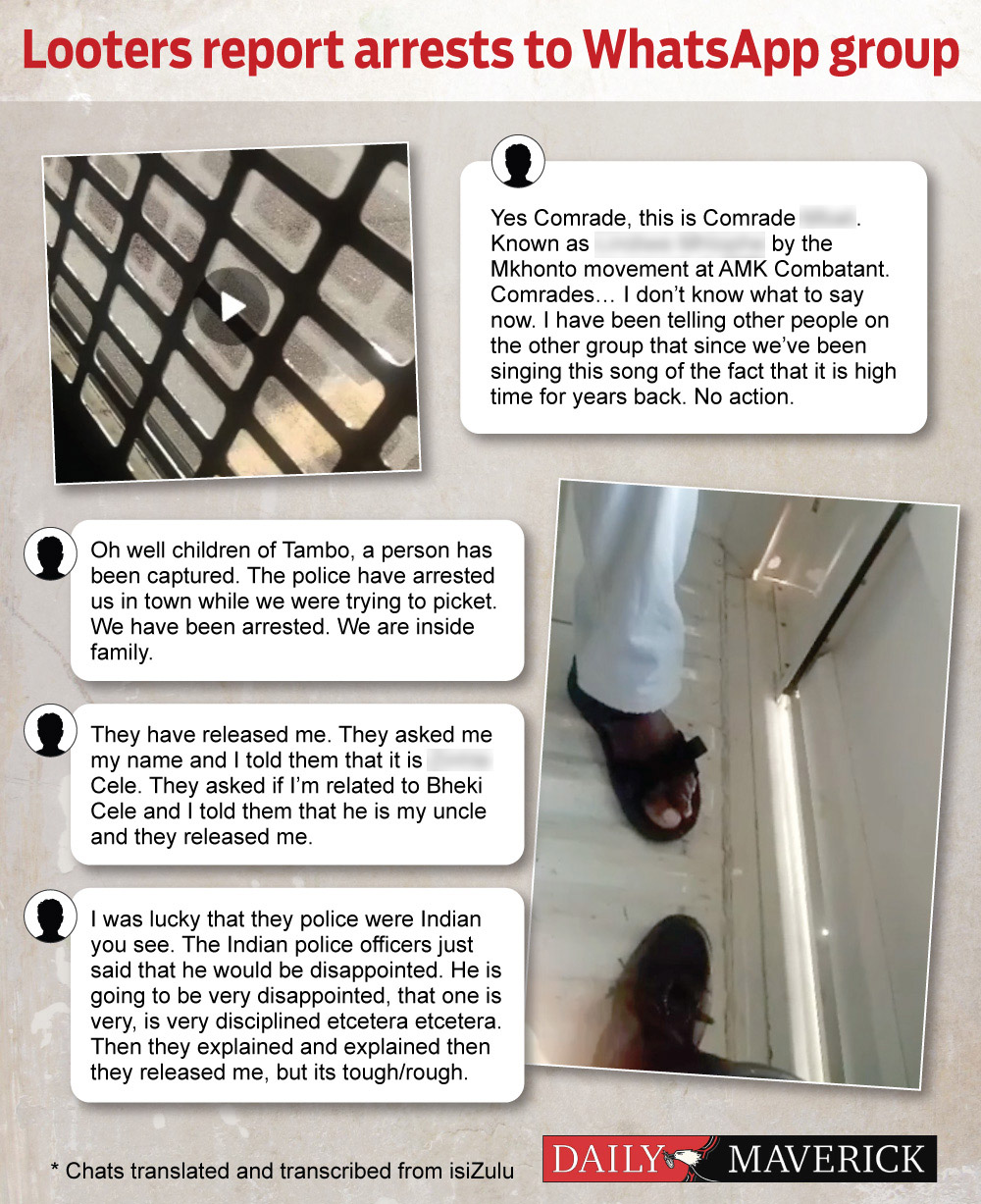 Over the week, overstretched police arrested almost 1,700 people in Gauteng and KwaZulu-Natal. In Durban, some of those arrested posted their arrests via video messages from the back of police vans into their WhatsApp groups.

While the police said the arrests were for criminal charges, the protesters understood it as political. “Oh well, children of [Oliver] Tambo, a person has been captured. The police have arrested us in town while we were trying to picket. We have been arrested. We are inside,” said a post. Another woman posted that she was related to Police Minister Bheki Cele and was released. Another said Indian police had let them go on a warning.

All the WhatsApp group posts have a common theme: the organisers and protesters used the language of ANC politics to organise themselves and their actions, suggesting that what was initially a political campaign ran out of control and transmogrified into something else.

Some of the evidence Daily Maverick has used is from whistle-blowers in the ANC who are shocked at what their fellow members did in KwaZulu-Natal and Gauteng.

“The province [KZN] and region [eThekwini] of the ANC must act immediately, or the [ANC] NEC must act against ANC KZN,” said an activist party member. “We cannot ignore these instigators and perpetrators. They must be reported to the police, suspended and removed from government jobs.

“While the ‘big fish’ will be harder to catch (as they will be more careful), the government employees, members of branches, RECs [regional executive committees], and local tenderpreneurs who planned, instigated, and actually did the damage must be arrested and held accountable,” said the activist.

He said the group wanted to see action against perpetrators who had collected tyres (to be burnt at protests), used bulldozers (to block roads with sand), petrol bombs, and mobilised to cause destruction.

“In situations like this, you want to catch the person who gave the instruction.”

The ANC activists have compiled a list of 30 names they believe the police should be investigating, but are yet to hand it over to anyone. DM