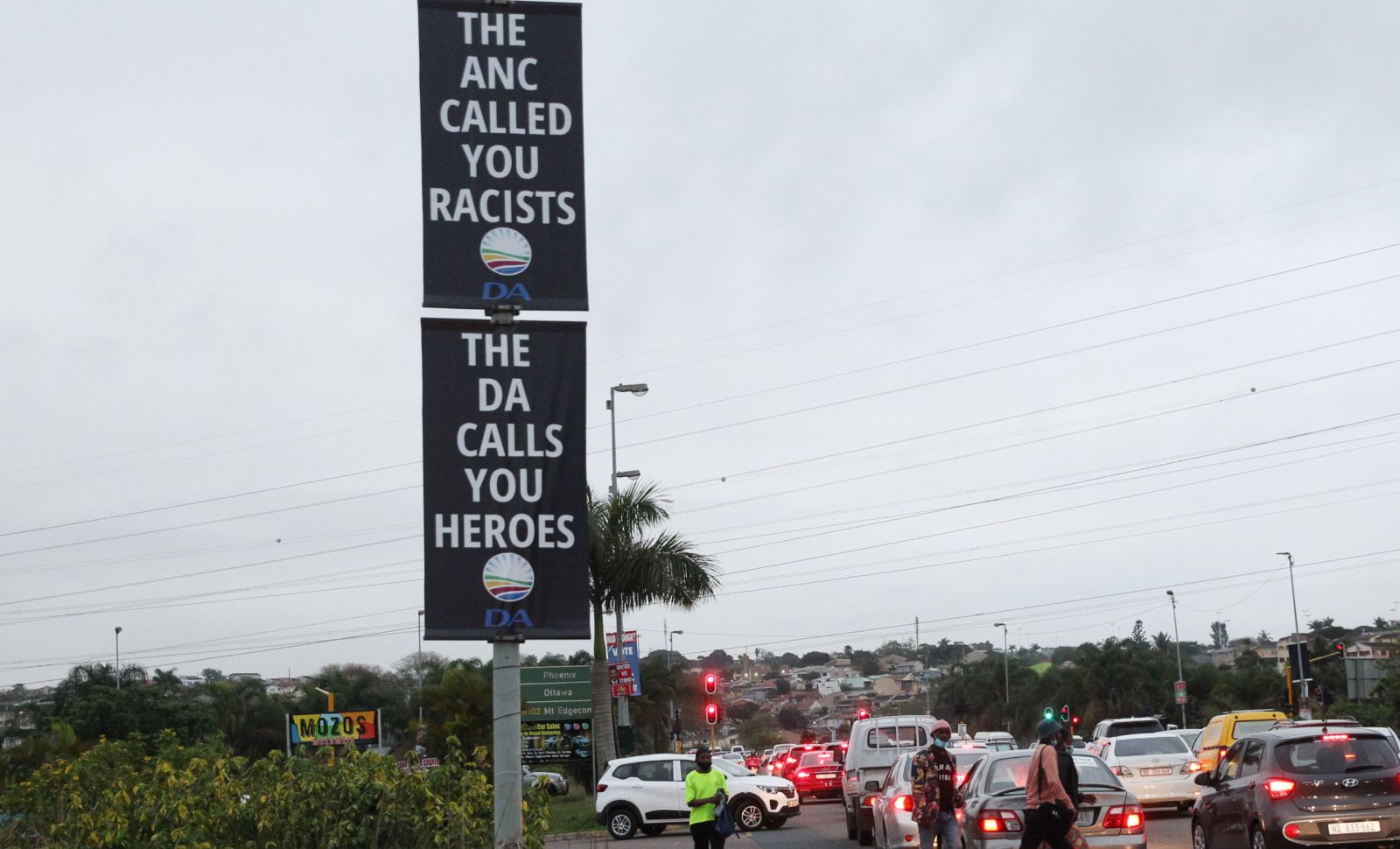 There are many cases where the divisions in a democracy are deepened during an election campaign. The DA appears to be one of those parties that seeks to deepen these divisions simply for its own ends – consequences be damned.

During elections, politicians seeking to differentiate themselves through issues around identities can divide entire democratic societies. Now it appears that some parties are deliberately seeking to provoke even further divisions. It is not clear that they will benefit from this stance.

It is also not clear, however, that they will be punished, as the governing party must also take some responsibility for the conditions under which these divisions are being exploited.

On Tuesday afternoon, it emerged that the DA had set up posters in Phoenix, eThekwini, declaring that “The ANC called you racists” and “The DA calls you heroes”. The posters were erected in Phoenix first, but the party has confirmed it intends to post them throughout eThekwini.

There can be no doubt of what the DA is doing here. It said this is a reference to the July violence in Phoenix, when groups of black and Indian people were fighting one another. There can also be no doubt of the divisions that this will inflame.

This is a deliberate, provocative act.

The party is now defending its action. Its KZN leader, Dean Macpherson, told SAfm on Wednesday morning that there was nothing factually incorrect with the statement, that people who had defended their communities during the violence (presumably referring to Indian people) were “heroes”. He also claimed that the ANC had branded Indian people who had done this as “racist”.

It is not entirely certain that the facts of what actually happened bear that analysis out.

In one case the victim was Mondli Majola. Dylan Govender, Ned Govender and Jeetendra Jaikissoon are accused of his murder. The court has seen video evidence of Majola being hit by an object on the head and thighs, while surrounded by a group of people. He fell to the ground after being hit and lay motionless.

It would be hard to suggest that a group of people are “heroes” for hitting a person in this way, while he is surrounded.

Police Minister Bheki Cele has said that more than 150 illegal guns were confiscated by the police from just four security companies operating in Phoenix.

What were they doing with more than 150 illegal guns?

Again, this is not the action of “heroes”.

It is clear that the DA’s actions here are aimed at winning the votes of Indian people; they want to show that they are “standing up” for them when no one else will.

Worse, it appears the DA is suggesting that it is the governing party, the ANC, that is threatening the Indian community.

This may well bring to mind events that lie in the past, which still haunt this community today.

This is not the first time the DA has used a deliberately provocative campaign.

In 2016 it ran a campaign claiming that to honour Mandela’s vision was to vote for the DA. It was incredibly contentious and infuriated the ANC and others.

It may be that one of the aims of the DA’s strategy is to try to set the terms of the election, to be the party that determines the dominant question of the election. If its strategists believe that an election is going to be about race, then they may as well grab the initiative first.

The ANC has condemned the DA over the poster strategy, claiming it is evidence of a “swart gevaar” campaign, a reference to how certain parties pandered to the white electorate during apartheid, with a claim that only a particular party would defend white people from black people.

The ANC is not completely blameless, though.

Some of its senior members appear to have made racist comments about Indian people.

The party has confirmed that it is instituting disciplinary action against a member of the ANC Youth League Task Team, Sizophila Mkhize, for comments she made about Indian people in the aftermath of the violence in Phoenix.

At the same time, it may be important to note that the entire context of the situation in Phoenix was formed by the violence which occurred there earlier this year and engulfed KZN and Gauteng.

There is no doubt that the violence was triggered by the imprisonment of former president Jacob Zuma, who is also a former leader of the ANC.

During the violence, the ANC itself accepted that it was partly to blame for what happened, that this was really the result of its internal divisions. To put it more crisply, this violence would not have happened if the ANC had not been divided. It is clear that it was supporters of Zuma who helped to incite the greatest disturbance in democratic South Africa.

It is also true that the party has not taken action against any of its members who incited this violence.

Zuma’s daughter Duduzile Zuma-Sambudla used Twitter to encourage people to commit violence. No action has been taken against her by the party.

Zuma’s son Duduzane Zuma, who claims that he will be the next leader of the ANC, told people to “loot responsibly” during the violence. He appears to still be running this campaign after the violence.

No action has been taken against him by the party.

This may well have encouraged the DA to take this risky step. At the very least, it has helped to create a context in which these posters might be seen as helpful in galvanising the support of Indian people in Phoenix, who may feel under threat.

Then there is the fact that our law enforcement agencies, which are led by ANC deployees, have failed in a much more significant way.

Immediately after the violence began it became clear that one of the most important ways to ensure that this never happened again was to make everyone know exactly who was responsible. Critical to this was to know who committed the violence, who opened shopping centres to allow looters inside, who had committed which crimes and who had arranged them.

And then for those people to be held legally accountable.

But, apart from a few cases where people are being charged with inciting violence, none of this has happened.

There is still no publicly available finding of what exactly happened and who was responsible.

If no one is held accountable, there is no reason why it cannot happen again.

And this is what underscores the fear in Phoenix, the fear that the DA is now trying to capitalise on.

There are many cases where the divisions in a democracy are deepened during an election campaign. The last presidential elections in the US that saw former president Donald Trump against the current president, Joe Biden, are a good example of the damage that can be done. There is evidence now that plenty of people profit from divisions in our society.

The DA appears to be among those parties that seek to deepen these divisions simply for its own ends – and hang the consequences.

In the process, it also makes it easier for others to do so. Such as the EFF. DM