DA will erect its ‘Racist vs Heroes’ posters throughout eThekwini 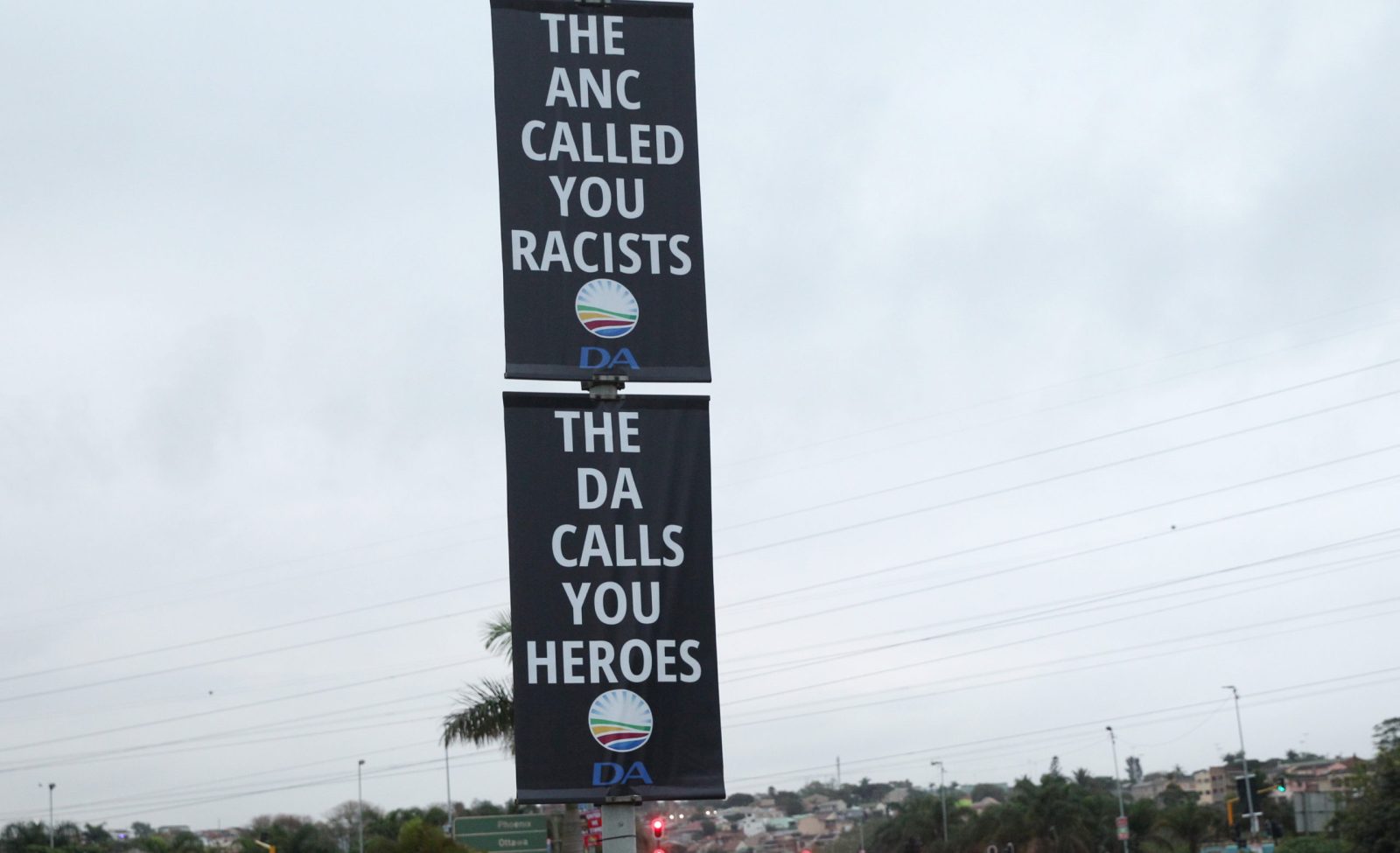 Democratic Alliance election posters erected on Phoenix Highway in eThekwini have sparked outrage. Thirty-six people were killed in the July unrest. The ANC has accused the DA of promoting racism and violence. (Photo: Mandla Langa)

The DA has sparked outrage after erecting posters in Phoenix, eThekwini, calling those who defended their communities during the July unrest ‘heroes’. The ANC has accused the opposition party of promoting racism and violence.

Democratic Alliance (DA) local government election posters that have been erected in Phoenix, eThekwini, and branded “shameful and fascist in nature” by the provincial ANC will be going up all over the metro, DA KZN chairperson and campaign manager Dean Macpherson told Daily Maverick on Tuesday evening.

Macpherson said the party started erecting the posters in Phoenix because: “You have to start somewhere, and we are going north to south”.

The two-tier posters are branded with the DA logo, albeit with a darker blue background. The first line reads: “THE ANC CALLED YOU RACISTS”, followed below by: “THE DA CALLS YOU HEROES”.

The reference is to the violent civil unrest and looting that engulfed KwaZulu-Natal and, to a lesser extent, Gauteng, in July.

In the absence of “overwhelmed” police — and while citizens were awaiting the deployment of the SA National Defence Force — hundreds of neighbourhoods formed community patrol groups to protect themselves, their properties and their shopping centres from looting and destruction.

Several vigilante groups and trigger-happy individuals also emerged and appeared to have indiscriminately murdered people in the name of “protection”.

Such was the case in Phoenix, where at least 36 people — most of them black — were allegedly killed by Indian residents. Several residents of Indian descent were also killed. Forty-three people were arrested and several cases are before the courts.

Macpherson told Daily Maverick there was “nothing untrue about those posters”.

“We don’t subscribe to that. We think that the ANC has used the race card to hide the terrible conflict and damage that has been inflicted on the city because the ANC decided to have a family argument on our streets, costing billions of rands and hundreds of lives.

“We think that anyone that actually stood up was the blue line between total anarchy and chaos that we were subjected to, [and] are heroes.”

Macpherson said President Cyril Ramaphosa was himself on record as saying people who defended their communities were heroes.

Asked if the wording on the posters could not stoke racial tensions in Phoenix, Macpherson claimed that only the ANC and EFF had been stoking racial tension in the area.

As the provincial campaign manager, Macpherson is responsible for the messaging, but eThekwini municipality’s administration had approved the wording, he said. “They didn’t have a problem with the message, and they are an ANC administration.”

Several DA councillors told Daily Maverick that they were unhappy with the messaging, and wanted the posters removed. Asked how he would respond to detractors within the party, Macpherson replied: “They can phone me.”

He reiterated that the posters would be going up in various constituencies, not only in Indian areas. “They are going up in my constituency of Umhlanga, Durban North, Newlands, I can assure you of that.”

As for the outrage brewing on social media by some about the posters, Macpherson said: “They probably don’t live in Durban, so they don’t know what they are talking about. It’s easy to sit in your home around the province and not know what the ANC subjected us to, and what the ANC continued to subject us to.

“Quite frankly, voters and residents in eThekwini are tired of it. They are tired of being pawns in the ANC’s political games that cost people their lives and their livelihoods.”

The ANC in KwaZulu-Natal released a statement on Tuesday afternoon in which it said that the posters indicated, “[T]he DA promotes and supports the heinous murders committed by [a] few racists in Phoenix during the violent protests in July.

“The disgusting act of the DA to pit people against each other using its election posters erected in the Phoenix area on the north of Durban shows that this party has no respect for human life.

“It shows the true colour of the DA that is desperate to an extent of spreading lies to gain votes. Their actions reveal that they are a party that will do anything as they thrive through creating division and perpetuating racism.”

The statement further said that the ANC was a non-racial, non-sexist and democratic government that “doesn’t perpetuate any divisions among citizens of the country”.

According to 2016 election data, the DA has four fairly safe seats in Phoenix; however, there are also three marginal seats in the surrounding wards in traditional Indian population areas that the party could snatch from the ANC if it mobilises its voters.

The ANC currently holds the seat in Mt Edgecombe (Ward 102), having obtained 46% of the vote in 2016 to the DA’s 39% on a 66% turnout in that election. With a 30% Indian population in that area, getting those residents out to vote is key to taking the seat.

In Westham (Ward 52) it is even tighter, with the ANC holding the seat by the tiniest of margins, having secured 44% to the DA’s 42%. There is another equally tight race in Glen Anil/Redhill (Ward 110), currently held by the ANC with 42% against the DA’s 41%.

The DA’s campaign will probably be similar in other areas with large Indian populations.

Nationwide, 359 people died as a result of the unrest in July — the vast majority of these in KZN — and as a result of fighting between looters, or looters being crushed and suffocated as they scrambled for stolen goods.

A clutch of alleged “instigators” have been arrested for stoking the violence. All have been released on bail.

The looting and destruction cost KZN more than R20-billion, with investors, the public and political parties and civil society expressing deep dissatisfaction at the government’s response to the unrest.

During an appearance before the National Council of Provinces in August, Police Minister Bheki Cele said that the riots had led to 200 malls being looted and damaged, and 100 damaged by fire.