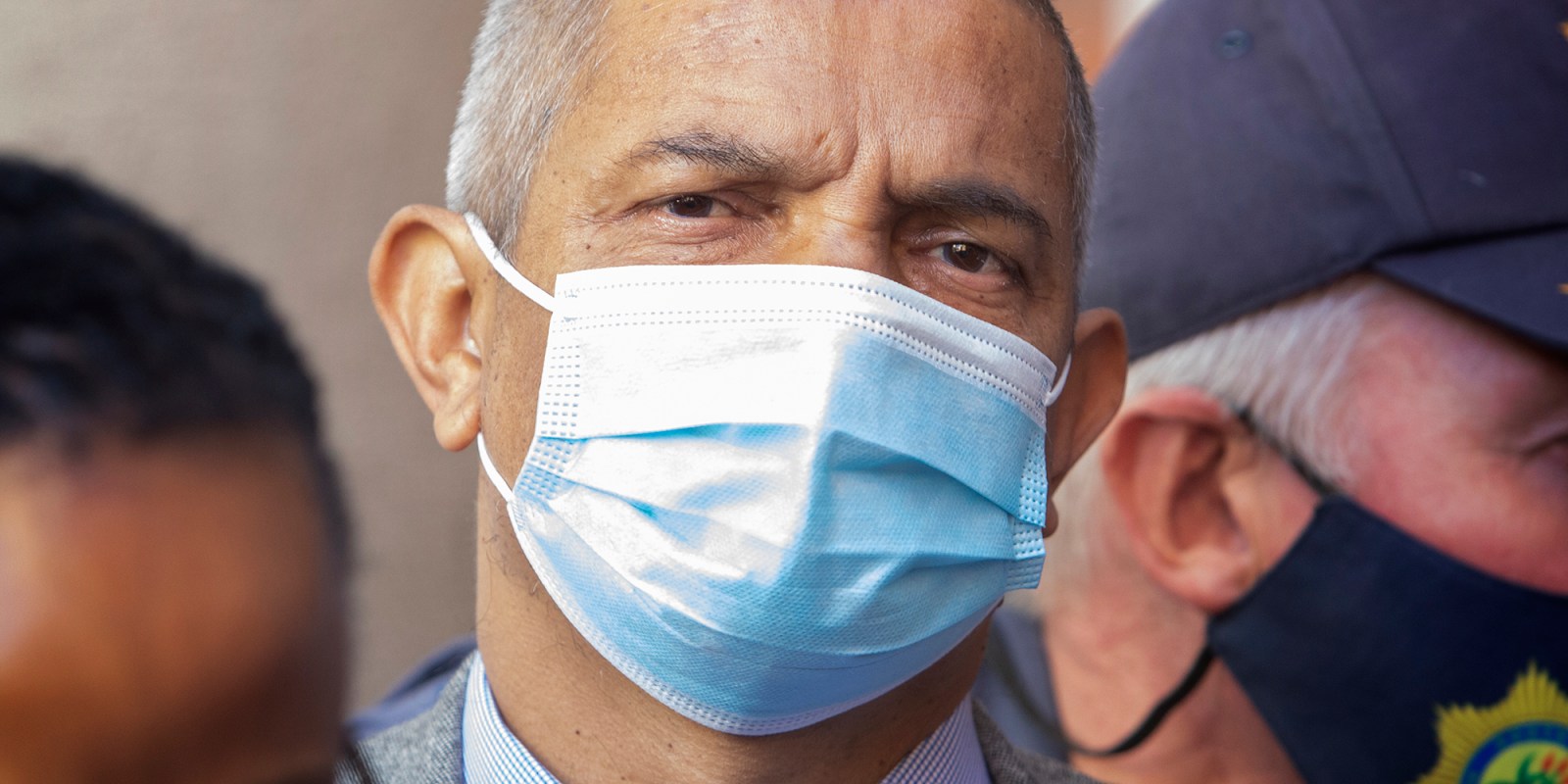 Crime Intelligence officers Mzwandile Tiyo and Feroz Khan have launched legal action against fired cop Jeremy Vearey over comments they feel reflect badly on them. Together they want him to cough up R15-million in yet another matter showing just how fraught and fragmented South Africa’s policing arena is.

Axed policeman Jeremy Vearey’s battle against former fellow cops has taken another dramatic twist. He is now not only fighting to get his job back, but is also facing a multi-million rand defamation suit lodged by two Crime Intelligence officers.

This emerged on Monday, 13 September 2021, when a partially heard Safety and Security Sectoral Bargaining Council hearing into Vearey’s firing resumed.

The hearing came about after Vearey challenged his dismissal which national police commissioner Khehla Sitole signed off on at the end of May.

Vearey was fired over a series of Facebook posts which some police officers viewed as derogatory and threatening, but which Vearey has maintained were not intended as such.

On 25 February, Vearey posted the words “MOER HULLE!” along with a link to a News24 article about his colleague Peter Jacobs, the head of the SAPS Inspectorate.

On Monday, when the hearing into his dismissal resumed, Vearey said that a few days earlier, on 8 September, he had received a combined summons from two Crime Intelligence officers. This involved relief claims relating to reputational damage and totalling R15-million.

Vearey was concerned this matter could impact the hearing into his dismissal because both dealt with the same issues.

The two officers behind the summons are Western Cape Crime Intelligence boss Mzwandile Tiyo and Crime Intelligence officer Feroz Khan. Tiyo is claiming R10-million from Vearey and Khan R5-million in connection with comments Vearey made during a television interview in June.

In the case of Tiyo, this is also related to material in Vearey’s latest book, Into Dark Water: A Police Memoir.

The defamation suit did not feature prominently during Vearey’s dismissal proceedings on Monday. However, it does link the hearing and several other interrelated problems choking the police service.

Previously during Vearey’s dismissal hearing, his legal representative said Tiyo was effectively behind the flagging of Vearey’s Facebook posts as problematic, leading to him being fired.

A similar situation that unfolded a few years ago is also linked to Tiyo and Vearey.

Jacobs was previously head of Crime Intelligence in the Western Cape but was transferred in June 2016, along with Vearey, while they were investigating police members funnelling firearms to gangsters.

Jacobs and Vearey challenged their 2016 transfers in the Cape Town Labour Court and in August 2017 were successful. However, Tiyo remained Western Cape intelligence head and Jacobs was subsequently promoted to national Crime Intelligence boss.

This is the position he was controversially transferred from earlier this year following his suspension, which Jacobs believes was based on bogus charges.

Mfazi died on 8 July due to what the SAPS said at the time was Covid-related complications. However, at the start of September, as suspicions swirled in police circles that he may have been poisoned, police confirmed they were in fact investigating the cause of Mfazi’s death.

That is the complex backdrop to the pending R15-million lawsuit Vearey now faces.

Vearey has previously claimed there was a strategy to rid the police service of himself, Jacobs and Western Cape Anti-Gang Unit head Andre Lincoln. All three were once members of the ANC’s military wing, Umkhonto weSizwe.

“We exposed corruption in the police and we diligently committed ourselves to the eradication of gang activities and police corruption,” Vearey said in court papers indirectly linked to his dismissal.

The combined summons against Vearey in the defamation matter, a copy of which Daily Maverick has seen, went into Tiyo’s background and said that he too had exposed police corruption. It said he served in the former non-statutory forces and received “international intelligence and military training in Russia, Angola, and East Germany before his official integration into the South African Police Service during 1995”.

Tiyo had also been a member of Umkhonto weSizwe.

Tiyo entered the police service with the rank of warrant officer and subsequently filled several roles. This included heading up the protection of Mbeki during his term as deputy president, being the station commander of the Paarl police station in the Western Cape and becoming provincial Crime Intelligence head.

He represented the country and police via official international visits and under his leadership,  the summons said, Crime Intelligence in the Western Cape received awards.

“[Tiyo] has also led investigations which exposed corruption within… the SAPS and South Africa, which have resulted in gross prosecutions and convictions thereto”.

“This relationship can be described as a professional working relationship given the posts held by ourselves,” it said, adding that Tiyo and Vearey had worked closely on the concept of the Anti-Gang Unit in 2018.

But the combined summons said that “once outside of the official working environment”, Vearey made “negative comments regarding” Tiyo and Crime Intelligence in the Western Cape.

Tiyo knew Vearey was at some point charged in relation to the Facebook posts, most of which referred to disciplinary charges against Jacobs, who Vearey was close to.

These posts, consisting of comments on Facebook with links to news articles, were at the heart of the disciplinary hearing that led to Vearey being fired.

The summons said “disgruntled [Vearey] opportunistically alleges” his dismissal was because Tiyo had pointed out one of the posts to police spokesperson Brigadier Vish Naidoo.

During Monday’s proceedings, an interview with Vearey that aired on eNCA on 3 June 2021 was played. The combined summons also referred to it. A transcript of this interview showed that Vearey told the interviewer that an online function translated his “moer hulle” post to “fuck them”.

Vearey said he had not typed “fuck them”.

In the interview, he said Tiyo circulated the post with the “fuck them” translation to Khan at Crime Intelligence head office, who then disseminated it further. Vearey, in the interview, said: “It was a dishonest exercise and a manipulation of a Facebook [post].”

The combined summons said the allegations, along with those in Vearey’s latest book, were defamatory as these were false and “were intended to undermine the status, good name and reputation of [Tiyo] in the most inflammatory manner”.

Vearey’s statements, according to the summons, were to publicly create the impression that Tiyo was, among other things, “a racist; corrupt; a fraudster; a co-conspirator; unprofessional; untrustworthy” and “a sabotage of SAPS”.

The summons, referring to the television interview, said Tiyo “sustained damages” totalling R5-million with regard to reputational damage, humiliation and degradation. It said in terms of Vearey’s book, Into Dark Water, Tiyo was portrayed as corrupt and part of “a rogue Crime Intelligence team”.

Meanwhile, the allegation of “rogue Crime Intelligence” was in turn linked to claims made by detective Charl Kinnear, who was assassinated a year ago outside his Bishop Lavis home in Cape Town.

In December 2018, Kinnear complained to his bosses about a group of cops in the Western Cape using state resources to target him and a few of his colleagues, including Lincoln and Vearey.

Jacobs, as national Crime Intelligence head, labelled this group a rogue unit. However, nothing had come of this.

On Monday during the hearing into Vearey’s dismissal, the combined summons was not focused on for very long. Instead, Vearey’s conduct came under the spotlight.

Vearey said his Facebook comments that led to his firing were not intended to incite violence.

Omphemetse Mooki SC, who was cross-examining Vearey, referenced one of the posts and pointed out that several of those who commented on it were police officers.

Vearey’s legal representative, Johann Nortje, had Vearey read out some of the comments. All were supportive of Vearey and none referred to violence.

In August during the hearing, Major-General JP Scheepers, previously tasked with investigating Vearey’s conduct on Facebook, testified that he believed Vearey’s Facebook posts, along with the context (as understood by Scheepers), bordered on treason.

Eastern Cape police commissioner Lieutenant-General Liziwe Ntshinga, who headed a disciplinary meeting into Vearey’s conduct that led up to his firing, also testified that she believed Vearey’s Facebook posts were damaging to the image of the police.

Vearey has maintained he used the words “moer hulle” in his dialect, Afrikaaps, which is spoken on the Cape Flats, and not in Afrikaans, which was taught in school. It therefore had a different meaning to what some assumed.

A finding on whether Vearey should have been fired is yet to be made and the matter is expected to start wrapping up later this year. DM