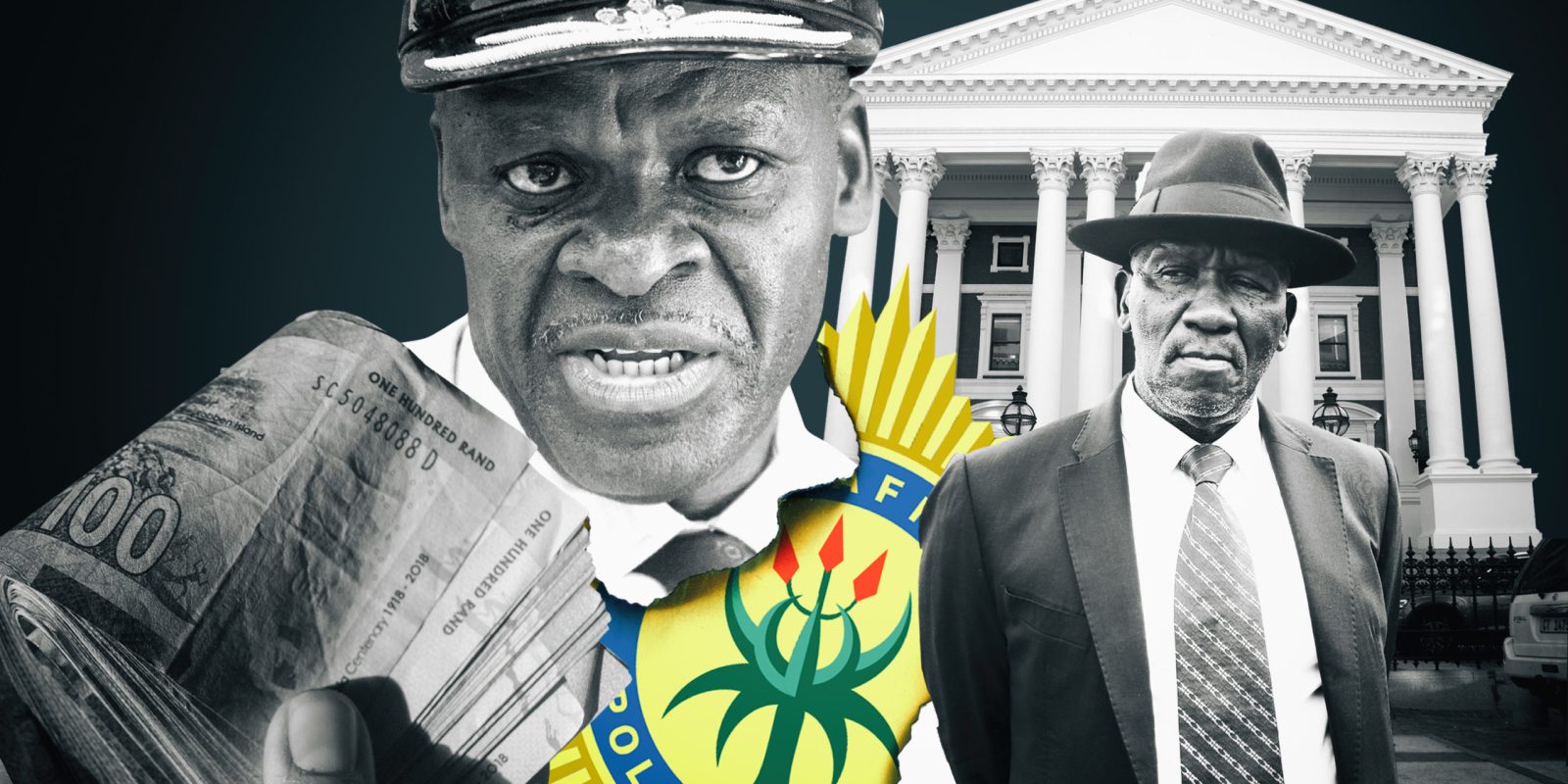 A senior police officer at the heart of Crime Intelligence, Major-General Feroz Khan, who walked away unscathed after a nasty brush with former minister of police Fikile Mbalula, has found himself in the sights of the current minister, Bheki Cele.

It has emerged from correspondence between the Ministry of Police and the Office of the National Commissioner and seen by Daily Maverick that Major-General Feroz Khan, a senior police officer in Crime Intelligence, features as a key person of interest to Police Minister Bheki Cele.

Four years ago the then police minister, Fikile Mbalula, attempted to seize control of Crime Intelligence by issuing a ministerial directive which included the rescinding of the promotion of Khan and Colonel Smanga Simelane.

In 2017 City Press revealed that Khan, who was photographed with former president Jacob Zuma, had been working since 1997 without high-level security clearance.

Khan, who jumped brass from colonel to major-general (skipping brigadier) is the director of eight active businesses, including Spares Oasis, a motor parts chain opened in 2001 and said to be worth R21-million. It is unknown whether Khan has permission to run these private businesses.

Khan is also the director of Vineyard Paths Holdings and Tindyelo Holdings, both registered in 2020, Wishing Well Holdings (2018), Spares Oasis (2018), Inspirational Holdings (2018), Magic Motor Spares (2013) and Nabuvista (2012). Together with his wife, he owns several upmarket properties, one of which he has been accused of renting to Crime Intelligence.

The standoff lasted until 2 August 2021, which is when Sitole claims Cele signed off on the budget. This Sitole told the Portfolio Committee on Police on Wednesday, 18 August.

By then July had come and gone, and the failed insurrection in the wake of former president Jacob Zuma’s incarceration had torn through KwaZulu-Natal leaving more than 300 people dead, crippled infrastructure and billions lost to the economy. The country’s intelligence services failed abysmally.

Aspects of the insurrection were well planned and executed, including the vandalisation and destruction of at least 1,227 ATMs and the theft of around R120-million in cash. Transport routes, warehouses, trucks and shopping centres were targeted.

Two months before, on 19 May, Cele had written to Sitole saying it had come to his attention that Khan’s delegation by the late Lieutenant-General Sindile Mfazi, deputy national police commissioner for crime detection, as acting divisional commissioner of Crime Intelligence from December 2020 to February 2021 had been illegal.

Jacobs, who claimed he had been suspended for exposing corruption in Crime Intelligence, challenged his suspension and was reinstated, albeit to the Inspectorate division.

“This office is aware that Major-General Khan signed various financial related documents and authorisations delegated to either the Chief Financial Officer of the Secret Services Account and/or Divisional Commissioner during this period,” wrote Cele to Sitole.

He said that since Khan’s appointment “was not done in accordance with prescripts, all instructions and documents signed by Major-General Khan have no legal standing and are thus irregular, if not illegal. This includes, inter alia, dismissals, financial authorisations and procurement authorisations.”

The minister demanded Sitole submit a report by 24 May outlining “documents signed by Khan for which only the Chief Financial Officer of the Secret Service Account or Divisional Commissioner had delegated powers”.

The report, said Cele, was to include “all Secret Services Account financial and procurement approvals signed by Major General Khan as well as the monetary value thereof.”

It is clear Cele wanted an urgent handle on what Khan had been up to while the Secret Service Account had been placed under his watch soon after Jacobs’ departure.

Later correspondence on 27 July 2021 between the chief of staff in the Ministry of Police, NH Phokane, and Major-General Joy Motubatsi, executive manager in the Office of the National Commissioner, indicates that Sitole and Cele appeared paralysed, caught in each other’s headlights when it came to Khan.

Motubatsi sets out that on 9 December 2020 Sitole had signed off on the Secret Services Account (SSA) Annual Report. This was followed by a 28 February 2021 document applying for funds for the State Security Agency, which was running dangerously low.

In March these documents were returned to Sitole by Cele with a note that the minister requested “a discussion” with the national commissioner.

A few follow-up emails attempted to set a date, which was finally confirmed for 17 May, but Cele cancelled on the day before, rescheduling for the fateful date of 7 July.

But who was to know what forces would be unleashed that same day as Zuma resisted arrest until almost midnight. Then all hell broke loose.

On 24 May Sitole replied that he had appointed Lieutenant-General Yolisa Mokgabudi to investigate “serious allegations as raised by the minister” in his letter of 19 May.

However, the ministry had, “to date”, not received “any report of the investigation which was instituted two months ago”. The outcome suggested Phokane should be “reported accordingly” to Cele.

Daily Maverick’s attempt to obtain comment from Khan via a WhatsApp to a number registered to him was unsuccessful.

From 2003 to 2009 he was part of “technical workshops” before moving to  Alex Crime Intelligence. Between 2010 and 2017 he was principal agent commander of the Undercover Agent Programme before becoming the section commander of Counter and Security Intelligence. These were the years he skipped a rank.

From 2017 to 2019 Khan worked as the head of Operational Intelligence support and is currently head of Counter and Security Intelligence.

In March 2021 an information note addressed to Khan suggested that Jacobs be investigated with regard to alleged “leaks” to the media.

Significantly, the document, marked “Secret”, also named Daily Maverick and this reporter as Jacobs’ alleged partners in crime, claiming Jacobs used the publication to “fight his battles” following his suspension. This reporter’s house was subsequently burgled and computers belonging to Daily Maverick were stolen.

Questions to Brigadier Mashadi Selepe, listed as the spokesperson for the Office of the National Commissioner, with regard to the status of the investigation into Khan were unanswered at the time of writing.

With Cele firmly in the ministerial hot seat after President Cyril Ramaphosa’s recent Cabinet reshuffle, he is unlikely to steer clear from SAPS operational matters, not with Sitole facing an inquiry into his fitness to hold office.

Sitole was present and on duty throughout Khan’s acting appointment by his deputy Mfazi and throughout the tenure of two police ministers who raised red flags. DM