Prasa has lost ‘millions’ in income and passengers,... 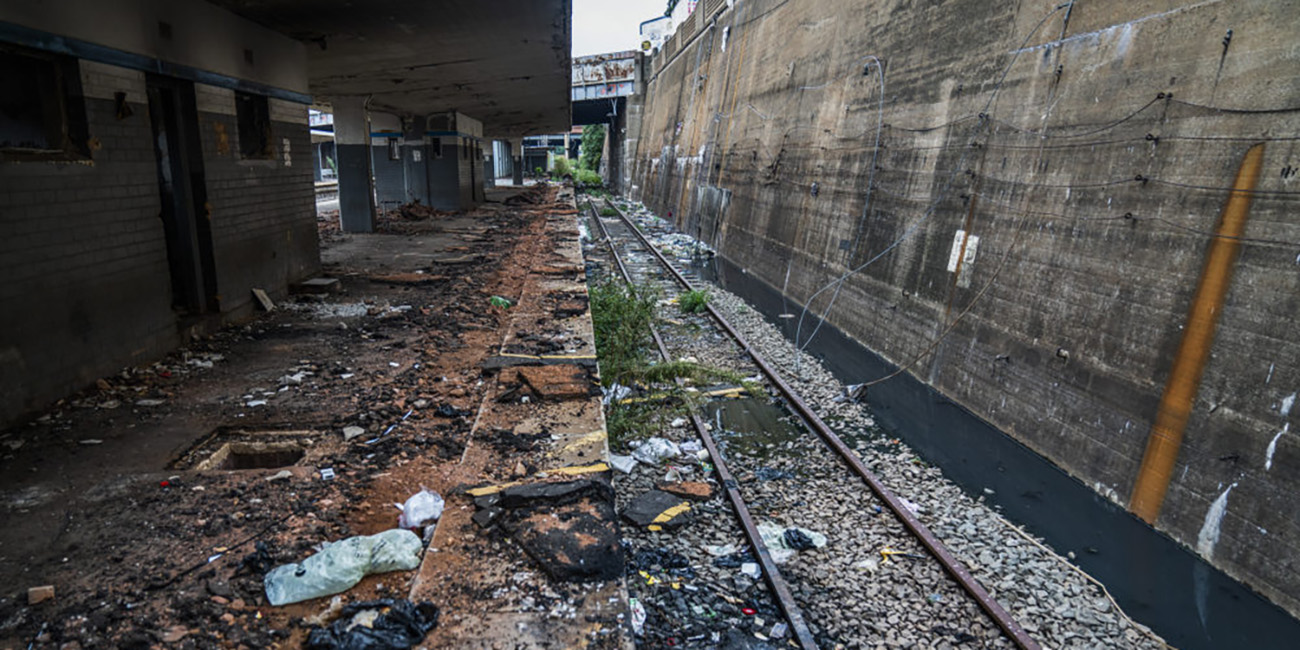 A deserted Jeppe station in Johannesburg, where chunks of tar have been ripped away to allow thieves access to cables. (Photo: Shiraaz Mohamed)

Prasa is trying to refurbish its infrastructure, but consistent problems with sustained theft, vandalism and land occupations are threatening to derail the rail agency’s plans.

The state-owned Passenger Rail Agency of South Africa (Prasa) told Parliament on Wednesday that it was trying to improve services, but sustained theft, vandalism and land occupations were hindering it from delivering a key transportation system to commuters.

Prasa has lost millions, “not only of money, but of ridership [commuters]”, said board chairperson Leonard Ramatlakane.

Officials from the agency, including Ramatlakane and Group Chief Executive Officer (GCEO) Zolani Matthews, briefed Parliament on Prasa’s progress on the refurbishment of infrastructure.

Read in Daily Maverick: Stripped bare: Looting till there is nothing left of Gauteng’s rail network and Prasa pins blame for collapsing East London train service on Covid-19 and vandalism

Ramatlakane and Matthews went through the agency’s plans to fix signalling equipment, perways, infrastructure and train sets, including a combined R2.8-billion investment into the Mabopane and Central lines as announced by President Cyril Ramaphosa in February 2020.

Touching on the dysfunctional Central Line in Cape Town, Ramatlakane, a former ANC MP who sat on Parliament’s transport oversight committee, said “it’s not there” for the 60% of public transport commuters — by his own figures — who depend on the service in Cape Town.

Matthews said the agency, which has been implicated in corruption and maladministration, was working towards being a “world-class system”.

However, Prasa needs to fix infrastructure — urgently. In its presentation before Parliament, Prasa said it aims to refurbish substations, fix perways, signalling systems, level crossings and electronic display boards and rehabilitate public access systems across the country, with time frames between March 2022 and September 2022. According to Prasa’s presentation, plans for these projects will be approved by October 2021.

Occupiers say they were forced to move on to the train tracks, which have not been operational since 2018. There are occupiers on the Langa and Phillipi train stations living in shacks in informal settlements on the disused train tracks.

At the Philippi informal settlement, Daily Maverick was told the occupiers moved there after they were left homeless when they could not afford to pay rent in backyard dwellings because of job losses associated with the Covid-19 lockdown.

Prasa sought an eviction order from the high court, which was granted in July, but on the basis that suitable accommodation be provided to the occupiers. In the court order, occupiers from Langa were to be resettled in Stellenbosch Road, Eerste River.

Ramatlakane said new issues were emerging with the resettlement of the Langa occupiers, as the people who live in the neighbourhood where the occupiers are expected to move are petitioning for the occupiers to be given built houses, not structures.

Ramatlakane said Prasa did not have the competency to buy land. This responsibility rested with provincial and local government authorities, which were struggling to find land. The national Department of Public Works and Infrastructure then had to step in to assist with providing land for the occupiers.

The land occupations in Langa and Phillipi were delaying the repair of the Central Line, said Ramatlkane. The line stretches from the Cape Town CBD into areas such as Mitchells Plain and Khayelitsha and has not been operational since 2019, because of vandalism and theft of signalling equipment and cables.

Matthews added that Prasa was working with the City of Cape Town and the Western Cape government to “discuss a consolidated approach” to solving the occupations.

Ramatlakane said that with the land issue being outside the mandate of Prasa, he is “very worried that we won’t make sufficient progress” in reopening the line in time.

The agency said it wants to reopen the Central Line in two phases. In Phase 1, Prasa aims to reopen the Central Line to Nyanga and Bellville by December. Prasa is aiming for 22 trips per day between 5am and 8pm. This would, however, require the Langa occupiers to be out of the informal settlement by September, along with a contractor for the perway rehabilitation to be appointed by the same month.

In Phase 2, Prasa aims to fully reopen the Central Line by December 2022, with new signalling equipment. Prasa aims to have 232 train trips per day at frequencies of 10-15 minute intervals.

Deputy Transport Minister Sindisiwe Chikunga, who represented Minister Fikile Mbalula, said the department was strengthening its oversight powers at Prasa and was in regular contact with the agency to improve its operations. She said the appointment of the board in October 2020 was a break with its “chaotic past” when the agency had not had stable leadership since the departure of Popo Molefe’s board in 2017.

Ramatlakane’s board, with the approval of Mbalula, hired Matthews as group CEO in March. Chikunga described this as “another step” in ensuring Prasa’s stability. Matthews is the agency’s first permanent GCEO since the departure of the controversial Lucky Montana in 2015.

Chikunga said that with the appointments, the agency could not take a “long-winded approach” to solving Prasa’s problems. DM