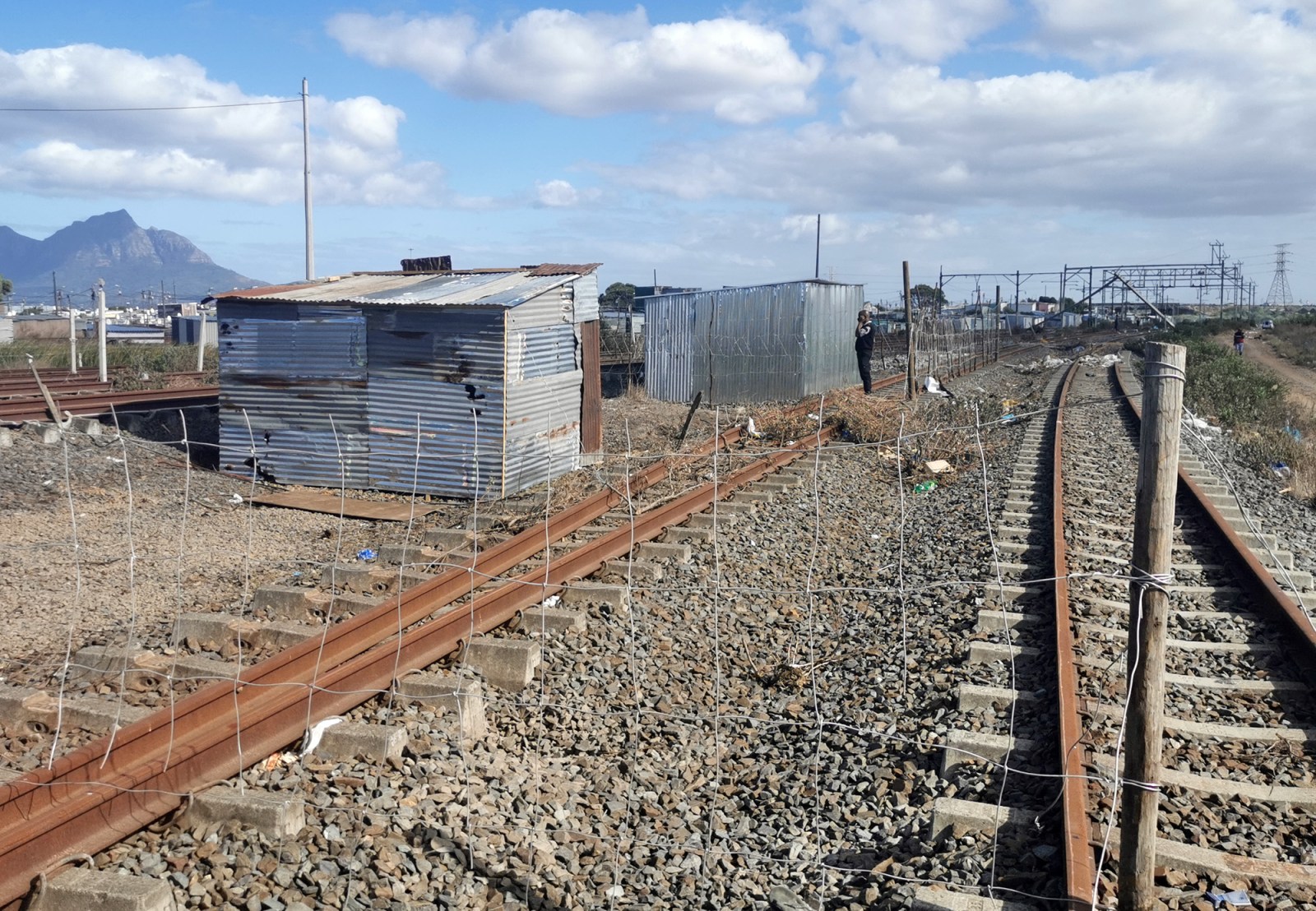 The community of Lockdown informal settlement in Cape Town, is one of two settlements on Prasa railway lines. The Central Line recovery cannot be completed until land occupiers are moved. (Photo: Suné Payne / Daily Maverick)

As SA’s rail agency prepares to repair the much-needed Central Line in Cape Town, two groups of land occupiers have made the railway tracks their home. Both groups insist that Prasa find suitable land for them, but the rail agency says it is ready to go to court if the occupiers don’t leave the land willingly.

The Central Line in Cape Town is geared up to be fully operational between September and December, following inactivity due to sustained vandalism, theft and arson on the essential railway line. But now there is another issue that could prevent the railway line from being operational – two land occupations on the tracks of Philippi and Langa.

About 7,000 people are living on the tracks, said Prasa board chairperson Leonard Ramatlakane on Monday 15 February as Prasa ran trains to Langa on the Central Line for the first time since November 2019.

“Obviously, people are telling us they want to move. Some are saying, ‘We don’t want to move’, but the fact is, they have to move,” said Ramatlakane.

According to GroundUp, the rail agency had issued notices to vacate the property to those who stayed in Langa in February. However, this weekend, those notices had expired and the occupiers had not moved.

“Obviously, now that they haven’t moved, we will have to get into the next phase – and the next phase is that we’re going to make sure we do orderly moving away of people from that place,” said Ramatlakane.

Prasa was working with all three spheres of government “to make sure they move”, said Ramatlakane.

“Everybody is aware we are asking them nicely to move, some of them want to move. When we were in Philippi, they were already beginning to break their stuff,” said the Prasa board chairperson. “We want people to go voluntarily.”

Ramatlakane said the courts were the last option to remove the occupiers.

“Hopefully, they will voluntarily move and we won’t have to go to court.”

But under the Covid-19 Disaster Management regulations, evictions are banned, unless there is a court order in place. Ramatlakane did not answer Daily Maverick’s question about the current ban on evictions.

In Philippi, the Lockdown informal settlement has about 400 shacks erected on and around the track. Wire fences neatly demarcate each erected shack. Community leaders told Daily Maverick there were, on average, three people living in each shack.

When this reporter was on the scene, there were no visible signs of toilets or taps. The smell of smoke hung heavy in the air as a fire was burning in the distance. The tracks were littered with broken glass, plastic bags and garbage. A broken Prasa overhead tower lay on the ground.

Nomapondo Makasi (31) has lived in Lockdown for about a month. She had to move from Gugulethu after she was unable to pay the R850 monthly rent on her backyard dwelling because she had lost her job. She said desperation led her to put up a shack in the informal settlement. Makasi had used her money from the Unemployment Insurance Fund to buy corrugated iron for her shack.

“They [landlords] need R850 whether you are working or not,” she said, speaking through an interpreter. At the moment, she lives alone in a shack in the informal settlement.

“Government must provide us with a place to stay, that’s all I can say,” said Makasi.

David Meleko (33) lives in a shack with his wife and three children. The couple lost their jobs during the Covid-19 lockdown.

“We don’t have a problem moving, but we have a problem with Prasa and the City of Cape Town. If they want us to move, they must give us a place to stay,” he said. Some occupiers have lived at the settlement for almost a year, others, like Meleko, have been there for six months.

“We are here to raise our kids and for our wives to be safe; we can’t move without a place to stay,” he said.

Meleko is a community leader in the settlement and told Daily Maverick that “90% of the people here are not working”. He said people at the settlement did not receive the R350 Social Distress of Relief Grant, meant as a support for unemployed people during the Covid-19 lockdown.

Meleko told Daily Maverick the residents who lived in Lockdown also needed trains – as many of them work in Epping, Athlone or the Cape Town CBD. The occupiers said they had received eviction notices with 10 days to leave the property – but these were undated. All they wanted was for Prasa to speak to them about the situation.

The City of Cape Town’s Mayoral Committee Member for Human Settlements, Malusi Booi, said there were “discussions between stakeholders on the way going forward” about any relocation.

When asked if the city had provided any ablution facilities – especially while SA is still in the grip of the Covid-19 pandemic, Booi said: “As this particular settlement is situated on privately-owned land, the city may not install services without permission.”

Booi said the city needed to act in “fairness and to recognise all of the other communities who have been waiting patiently for the delivery of services… this is especially important in light of the enormous increase in land invasions across the metro over the past months.”

Booi told Daily Maverick that “numerous” newly established communities were demanding services, but the city was unable to cater for unplanned settlements, “as existing recognised informal settlements are prioritised on the basis of available resources, which are not limitless”.

Booi did not answer specific questions about water and sanitation in the informal settlement in Philippi.

“Discussions between stakeholders on the way forward are ongoing, including where land occupiers might or might not be relocated to.” DM