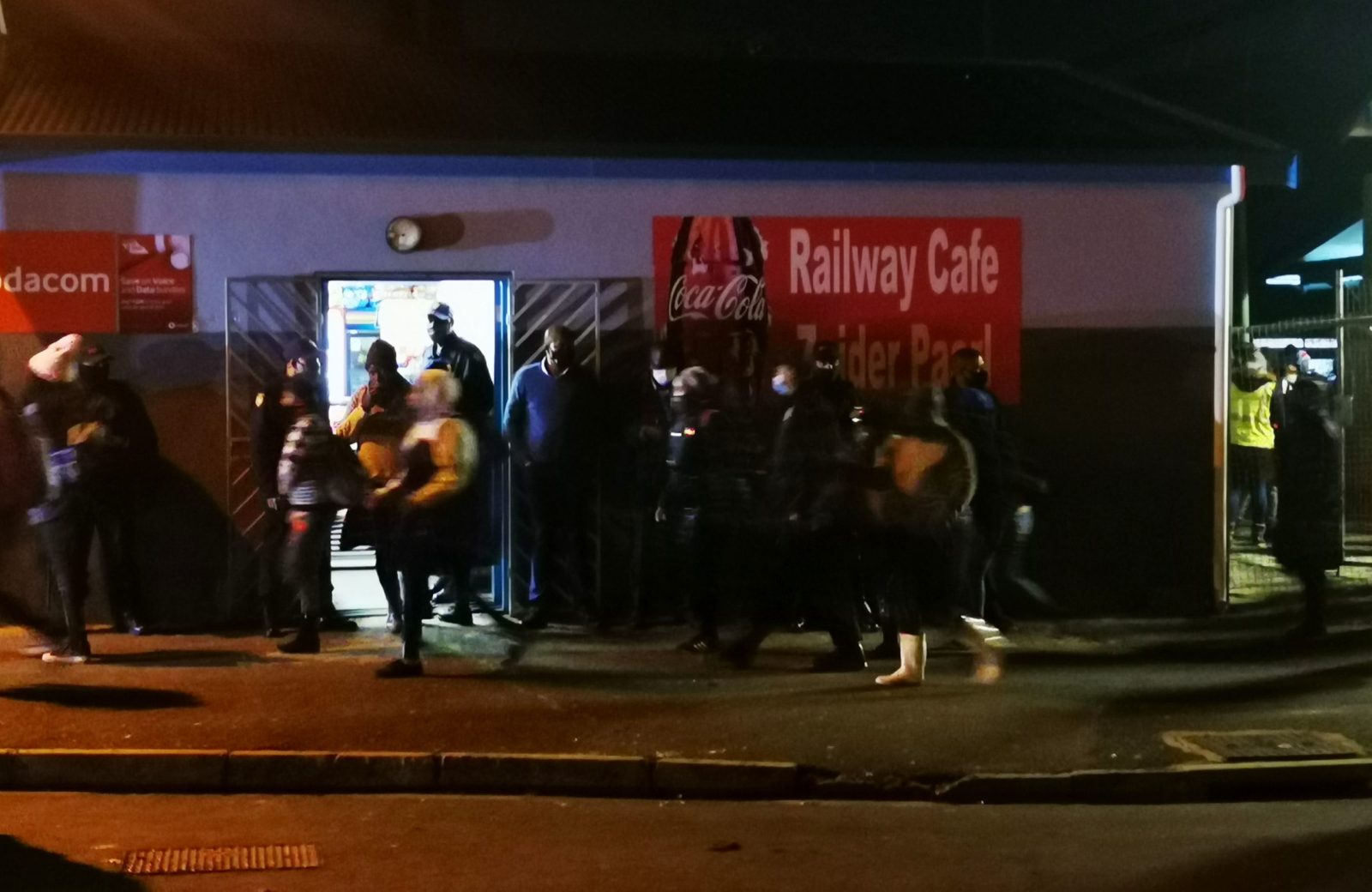 Commuters at Paarl train station on Tuesday 3 August rushing to get to the Bellville train. Commuters now have to use a train to get to their destination as the taxi route is closed due to violence. (Photo: Suné Payne, Daily Maverick.)

Cape commuters made their way to Paarl train station early on Tuesday, having been hampered by the ongoing B97 taxi route closure. Commuters have had to adopt alternative modes of transport, including trains and the more expensive bus services and were not shy about expressing their frustration to the transport minister.

The costs of Golden Arrow buses between Mbekweni in Paarl to Bellville are “too much”, commuters shouted at Transport Minister Fikile Mbalula, who on Tuesday 3 August travelled alongside Western Cape MEC Daylin Mitchell on a train from Paarl to Kraaifontein in the northern part of the Cape metro to check contingency efforts following the B97 taxi route closure.

The route was closed by Mitchell in July, due to ongoing violence between rival taxi associations Cape Amalgamated Taxi Association (Cata) and Congress of Democratic Taxi Association (Codeta), which spread quickly to other parts of the Cape metro.

This means taxis operators aligned to Cata and Codeta cannot operate between Mbekweni and the Bellville taxi rank but other licenced operators can. Additional transport was brought in to assist commuters: nine additional Golden Arrow buses during peak hours and 45 additional Metrorail train services.

However, during an interaction on the train, one woman shouted at Mbalula that the bus fare on Golden Arrow services was “too much” — a complaint Daily Maverick reported on previously. During peak hours, a bus trip from Mbekweni to Bellville was R43.  In comparison, the taxi was R25 and a single train trip cost R10.

A group of women who had been travelling from Mbekweni to destinations such as Bellville and Cape Town shared several complaints about the current rail situation: trains only ran on weekdays and often arrived at platforms too late in the evening, which left women in a vulnerable — particularly when walking home from train stations.

The train Mbalula, his entourage and journalists had boarded from Paarl to Kraaifontein had initially been delayed and stopped three times en route without explanation.

One woman said the trains are elke dag laat (late every day), which meant they were frequently late for work. “As women, our handbags get stolen by skollies” said another. As Mbalula interacted with commuters about going to work, a passenger mumbled to her friends “there’s a lot of people who lost their jobs”.

When asked by Daily Maverick what needs to be done to improve rail services, the group of women passengers said that trains need to arrive on time. They also argued that a direct train service between Paarl and Cape Town is needed, as commuters currently have to get change trains at Bellville station before continuing to Cape Town CBD.

Another commuter, Luke Chagwiza from Kraaifontein, arrived at Paarl train station just before 7am. He said that he was happy with the cheaper option of the train, R13 in comparison to R25 taxi fare, but said the lines were too long when purchasing train tickets.

Luke Chagwiza from Kraaifontein speaks to media on Tuesday morning. He took the train to Paarl, where transport authorities will be checking contingency measures on the B97 route.@dailymaverick pic.twitter.com/QnYyBEjXUu

Chagwiza said he preferred having the option of being able to use taxi and train services, with train travel being the more affordable option while taxis serve as alternative transport if trains were late.

“It saves our pockets as well if you don’t have money for a taxi,” said Chagwiza, who spends up to R20 per day on rail services but is forced to cough up R50 if he needed to use a taxi.

At Eikenfontein Train Station in Kraaifontein where a media briefing and site inspection took place after Mbalula’s train ride, Richard Walker, the regional manager for the Passenger Rail Agency of South Africa (Prasa) urged commuters to report instances of crime so that more police could be deployed to hotspot areas to ensure commuter safety.

Previously, on Monday 2 August, Mbalula and Mitchell announced that the two rival taxi associations had agreed to a ceasefire. At Mbalula’s briefing, he instructed all operators on Cape Town routes — except the ones affected by the B97 closure — to resume operations by Tuesday morning. Daily Maverick saw some taxis operating around Paarl station while waiting for the train to arrive.

“It’s a breakthrough,” remarked Mbalula of the taxi ceasefire. However, an arbitration process is underway to decide which organisation is legally allowed to operate on the B97 route.

Listen to MEC Mitchell explaining the next steps in the taxi industry debacle and his department’s role:

By Tuesday morning, Daily Maverick had seen a small number of taxis in Paarl and in the Northern Suburbs.

Meanwhile, the City of Cape Town’s Metro Police arrested a taxi driver for the possession of an unlicensed firearm. In a statement, the metro police say officers pulled over the vehicle during a joint roadblock with the South African Police Service (SAPS) in Milnerton. Police noticed the driver wearing a firearm holster and subsequently recovered a 9mm Norinco pistol and five rounds of ammunition from the vehicle. The driver was unable to produce a licence for the firearm and was subsequently detained at Milnerton SAPS. DM