It’s not yet uhuru, says Minister Mbalula, after Cape... 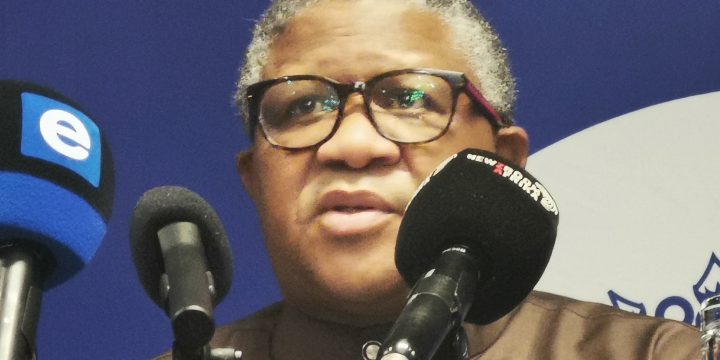 Taxi operations are set to resume on Tuesday in Cape Town, says Transport Minister Fikile Mbalula, as transport authorities meet in a city that has been gripped by ongoing taxi violence over the past few weeks.

Transport Minister Fikile Mbalula said on Monday he hoped that taxi operations would return to normality after an agreement was reached between rival taxi associations.

At a media briefing, Mbalula and Western Cape MEC for Transport and Public Works Daylin Mitchell announced that an agreement had been reached with the Cape Amalgamated Taxi Association (Cata) and the Congress of Democratic Taxi Associations (Codeta) which will see taxi operations resume on Tuesday morning. Present at the briefing was leadership from both Cata and Codeta as well as provincial representatives from the South African National Taxi Council (Santaco).

Since the start of July, taxi associations linked to Cata and Codeta have been at loggerheads over the B97 route, which runs between the Mbekweni taxi rank and the Bellville taxi rank. This has resulted in 24 murders and 29 attempted murders linked directly to the taxi industry.

At the end of July, Mitchell announced the closure of the route for two months. Read here.

There have been various talks to assist the warring associations: mediation processes facilitated by the national and provincial governments. There have been talks – and a peace accord – facilitated by the United Democratic Movement and the South African Federation of Trade Unions. In addition, the ANC in the province has said it would use its traditional support structures such as neighbourhood watches, community forums and the provincial tripartite alliance to facilitate negotiations between the associations.

Measures announced at the briefing include:

Santaco’s Nazeem Abdurahman said the past few weeks had been tough for the industry. Cata general secretary Mandla Hermanus said with up to 400 operators attached to the Bellville taxi rank, and with a three-week disruption, up to R6-million had been lost to the taxi industry. Codeta’s Lesley Sikuphela said the association would be doing everything in its power to make the industry “safe again” and that Codeta was committed to the arbitration process that was currently under way.

While Cata was committed to a peaceful process, Hermanus said there were issues that needed to be solved, including illegal recruitment of operators and poaching of operators, but he assured that these would be worked on by the industry.

At the heart of the dispute between the associations are commuters who are forced to use often more expensive transport options, who cannot get to work or school and have missed crucial Covid-19 vaccination appointments.

“I must use this opportunity to thank the commuters that have been inconvenienced by this time, that have struggled to get to and from work – people that could not get to vaccination sites,” said Mitchell.

Hermanus said it was disappointing that things had escalated to this level – people losing their jobs because they were unable to get to work and “kids will fail because they could not catch up” with the work that they missed because of being unable to attend school. Right now, the industry needs to “demonstrate that we are sorry”, added Hermanus.

“We can’t come back in a year’s time with the same issues,” said Mitchell.

See a brief history of the taxi violence in the Western Cape here. DM