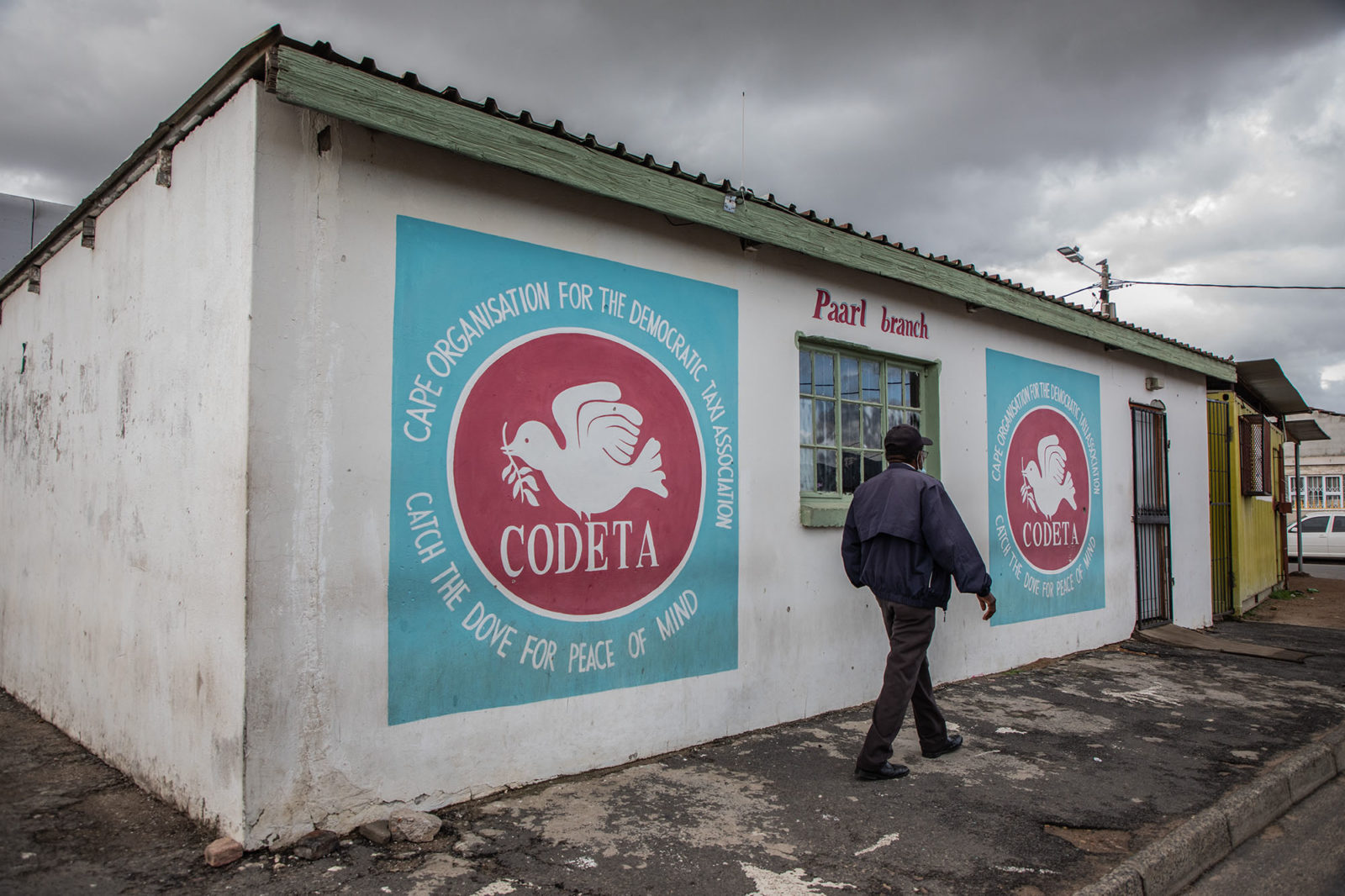 The Codeta office in Mbekweni, Paarl. Conflict between Codeta and the Cape Amalgamated Taxi Association (Cata) over the B97 route has led to numerous violent incidents. (Photo: Victoria O’Regan)

Cape Town’s commuters have faced violent incidents since taxi unrest flared up in the past month. But for the community where the unrest started, the economic toll of alternative transport is affecting commuters and taxi drivers alike.

The unrest began in Mbekweni in July, after which it spilled into other parts of Cape Town. It was sparked by a fight between two of the Cape’s biggest taxi associations – the Cape Amalgamated Taxi Association (Cata) and the Congress of Democratic Taxi Associations (Codeta) – over control of the B97 route, which runs between the Mbekweni taxi rank and the Bellville Public Transport Interchange.

Western Cape MEC for transport and public works Daylin Mitchell said that since the start of July there have been 24 murders and 28 attempted murders. Having threatened since early July to close the route due to the violence, Mitchell provided a space for mediated talks between the associations in an effort to stop the shootings.

However, the talks collapsed mid-July, forcing Mitchell to announce the closure of the route to Cata and Codeta. The closure came into effect on Monday, 26 July.

This forced commuters to use alternative transport such as buses, trains and private cars to get to work and school. Additional Golden Arrow buses between Paarl and Bellville were made available for commuters, said Mitchell. Trains on the northern line had also been increased from 14 to 45.

But for commuters like Saliso, the unrest hits commuters in their pockets. A taxi trip costs R25 from Mbekweni to the Bellville taxi rank, but on a bus they must fork out R21 to R44 for a single trip. “The buses are too much – it affects our savings – now you are not sure about what you’re going to use – it can be R80, it can be R100.”

About the unrest, Saliso said: “It makes me feel very sad; people’s lives are in danger, you don’t feel safe.”

When Daily Maverick visited the taxi rank after its closure, it was empty. Few taxis were on the road during the drive to Mbekweni, while buses operated freely. In Mbekweni there were two buses which displayed the Bellville bus terminus as their destination. At the taxi rank there were no taxis and no sign of commuters. No hooting or gaatjies (conductors) shouting their destinations.

There was, however, a group of taxi drivers standing close to the Codeta office. They spoke on condition of anonymity.

Currently, taxis can operate within the Mbekweni area – a trip costs R10, which is less than the regular R25 to Bellville. This affects taxi drivers’ income: working on the B97 route they earn up to R1,000 a day, now they only make up to R300.

“It affects us a lot,” said one driver. Their biggest problem is paying the monthly instalments on their taxis – between R15,000 and R17,000. “How can I pay for the combi? It’s standing in front of my house. We have children, we are breadwinners,” said another driver.

About the shootings, one driver remarked: “It’s very bad, you’re always scared. We don’t even know where they get firearms.” The drivers pointed out where the Codeta office had been shot at.

He explained there was confusion about the B97 closure – the drivers were aware they could no longer go into Bellville but they could operate within the Mbekweni area and pick up contractual work in other sections of Paarl. This had led to confusion with traffic and police authorities about how and where the drivers could operate.

“Police are beating our people… They hit our driver with a firearm,” one driver said. When the driver was stopped by the police he saw a firearm and decided to run away. But the police caught him and “beat him with a firearm”. In a video taken after the alleged incident, the young man is bleeding from the head.

The driver, who was unable to speak to Daily Maverick because he was unable to leave his bed, had been detained by officers for reckless and negligent driving. His letter of detainment was spotted with dried blood.

“The police are abusing us,” said another driver.

“They swear at us… they call us k*****s,” said a young-looking driver. Another claimed about public order policing officers: “They treat us like baboons because they know we can’t talk back.”

In response to the drivers allegations, Colonel Andrè Traut, the provincial commander for media communication said: “It is not uncommon for SAPS to be criticized during the execution of a crime operation, and when our members are in the wrong, they must bear the consequences of the law. It is on this basis that those who are making allegations of police brutality are encouraged to approach police management or IPID to lodge official complaints in this regard. It is not in our best interest to comment on allegations made without these allegations being substantiated by a full scale investigation.” DM