Cross-examination applications serve as a reminder of t... 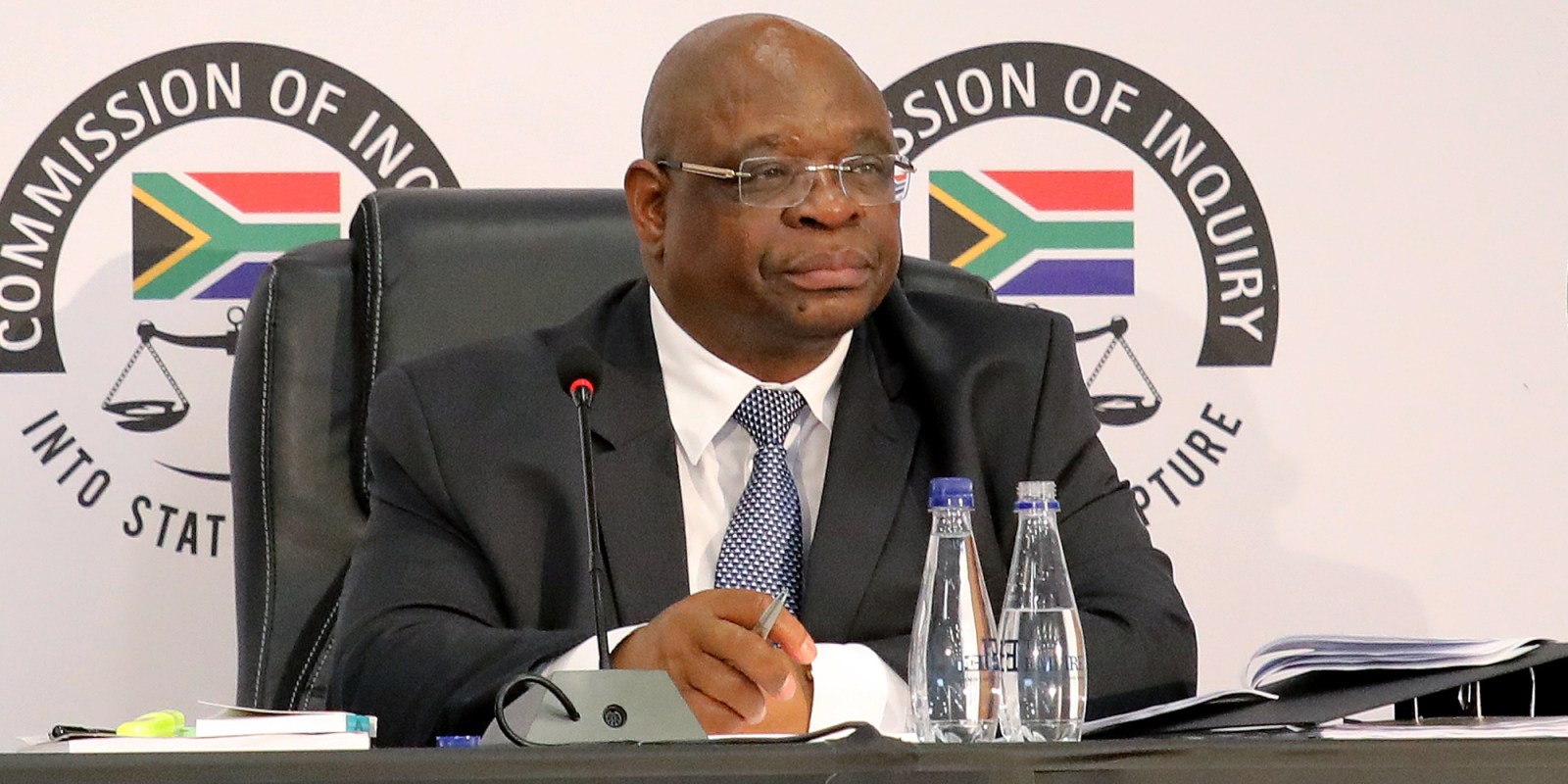 Skeletons gathered in the gargantuan Cabinet closet at the Zondo Commission over 2½ years of often startling testimony were again glimpsed when applications – mostly by implicated individuals – for leave to cross-examine witnesses were heard on Tuesday evening and Wednesday morning.

Zondo inferred the corruption at law enforcement agencies such as the police watchdog body Ipid, the Hawks and the National Prosecuting Authority was too deep for the commission to plumb, given the scope of State Capture it needed to investigate.

When it came to the law enforcement agency workstream, Zondo said the commission was “not going to complete the investigations and so cannot make any adverse findings against anyone”.

The commission’s work would not be for nought, though. Zondo said that “whatever other form or process that will investigate further” would take what had already been placed before the commission and continue the process.

Kgamanyane was appointed acting head of Ipid after McBride had his tenure as executive director terminated by Minister of Police Bheki Cele. McBride, Sesoko and Kuba were all involved in rooting out nefarious activities within crime intelligence, including rogue police units and alleged Russian assassination squads operating in ex-president Jacob Zuma’s home province of KwaZulu-Natal.

McBride pulled no punches in his testimony on 16 April 2019, as provided in context by Marianne Thamm, who also wrote this overview of the snake pit that law enforcement became under Zuma’s presidency.

In light of Zondo’s intention to refer these investigations to a separate body, Kgamanyane’s application was withdrawn.

This was the fate of many of the about 30 applications to cross-examine heard by Zondo. Others were dismissed, or a decision was taken to allow the applicant to provide further oral testimony, or to deal with it “on paper” by accepting affidavits to ensure the applicants’ version of events was considered by the commission.

Only former SAPS acting commissioner Khomotso Phahlane was granted leave to cross-examine Sesoko. Zondo said this was likely to happen this month, so Phahlane’s legal team needed to “be ready any time”.

Phahlane’s application to cross-examine Hawks investigator Kobus Roelofse, who lifted the lid on a cauldron of corruption at South Africa’s Crime Intelligence during testimony in September 2019, was altered to allow Phahlane to submit an affidavit relating to parts of Roelofse’s testimony that appeared to be contradictory.

Roelofse had testified that Phahlane was part of a cohort who resisted the declassification of information required for investigating allegations against former Crime Intelligence head Richard Mdluli.

The issue at stake was Carrim’s testimony that Motsoeneng was in part responsible for preventing the encryption in television set-top boxes, which enabled MultiChoice, then owned by Naspers, to continue to monopolise the pay-TV sector.

According to Carrim, MultiChoice paid off the Gupta family via ANN7, to ensure the encryption decision benefited the company.

Zondo said Motsoeneng’s version would be taken into account, but advocate MacGregor Kufa tried to stand by his client’s rights, claiming people had cast aspersions, and “the manner in which the interrogation panned out before this forum, it was as if you as chair was [sic] likely to accept the version of Carrim”.

Kufa said Motsoeneng’s dignity had been “shamed” and believed Motsoeneng had a “constitutional right” to question Carrim, and if he could not do so, asked he be given leave to lead evidence.

The appeal to cross-examine Carrim was dismissed, but Zondo said he would look at the versions presented in affidavits and consider whether further oral evidence was necessary.

Following the dismissal of Motsoeneng’s application, former minister of state security Siyabonga Cwele was also denied leave to cross-examine former spy boss Mo Shaik and his intelligence colleague Gibson Njenje. Shaik had testified that Cwele closed down their investigations into the Gupta family as early as 2011. However, Zondo said there was “an intention” to grant Cwele an opportunity to appear before the commission to provide his version of events.

Lucky Montana and the Werksmans spat

Hutton said Werksmans would not pursue its application to cross-examine Montana, but, with Zondo’s leave, read a short statement in which Montana was accused of levelling “the most audacious and scurrilous allegations” against the law firm, yet failed to produce “a scintilla of admissible evidence to corroborate his self-serving injurious attack”.

Montana, who was present at the hearings in order to contest Werksmans’ application, stepped up and asked if he could give a rejoinder of his own.

He used the opportunity to reiterate that Werksmans, who conducted numerous investigations into Prasa contracts following Public Protector Thuli Madonsela’s Derailed report, had been appointed “irregularly and fraudulently”.

Montana said an Auditor-General’s report of 2016, as well as letters and detailed emails he provided to the commission, showed that “this legal firm that claims to be fighting corruption in the country is at the heart of corruption”.

He added that Werksmans’ own reports stated they would conduct surveillance of hundreds of entities and more than 1,000 individuals, and their statement was “a political statement”. Nonetheless, he said he was “glad” they had withdrawn their application and, “I’m just asking the commission to now provide me the date for me to be led on my evidence.”

Zondo dismissed him with a “Thank you Mr Montana” and asked the registrar to call the next matter.

One of the last applications on Tuesday night, before the law enforcement agency workstream applications were summarily dealt with on Wednesday morning, was AfriForum’s request for leave to cross-examine President Cyril Ramaphosa.

What appeared to be a testing of the constitutional waters by AfriForum, represented by advocate Mia du Plessis, was also an example of grace in law.

Du Plessis was well prepared for what was bound to be a controversial application, given Ramaphosa’s position as president and AfriForum not having been implicated in testimony before the commission, which is one of the rules applied to cross-examination applications. But having parsed this rule, juxtaposed with Du Plessis’ reference to a commission rule that any party can make an application to the commission, in congruence with Section 38 (b) of the Constitution allowing for anyone acting in the public interest to approach a court for appropriate relief if a right in the Bill of Rights is believed to be infringed, Zondo agreed to give Du Plessis 10 minutes to present AfriForum’s plea.

The application, said Du Plessis, was “based on our constitutional rights, most importantly our rights against unfair discrimination”. Based on this, AfriForum sought greater clarity from Ramaphosa on cadre deployment policies.

The answers he gave to Zondo’s question about the importance of the ANC’s deployment committee as opposed to “mere identification of potential candidates” were “vague and beg for clarity”, said Du Plessis.

“It was proposed by yourself to President Ramaphosa,” she said, “that the candidates recommended by the deployment committee might have an unfair advantage, if I interpret that correctly.”

Yet, she said, Ramaphosa’s answer that the government needed “that political filter that will go ahead and appoint people who are not fit for purpose”, was “extremely confusing”.

This, together with former health and public enterprises minister Barbara Hogan’s testimony that a handful of people could not possibly have the institutional knowledge to pronounce on suitable candidates for every senior position in government, laid the foundation for AfriForum’s argument related to the constitutional right against unfair discrimination.

“The Constitution creates a structure of accountability between the voters, the National Assembly, the president and the Cabinet, and cadre deployment to a big extent disrupts every link in this chain of accountability,” said Du Plessis in her motivation that it was in the public interest for AfriForum to cross-examine Ramaphosa on this matter.

Zondo, however, dismissed what was Tuesday evening’s penultimate application.

The commission continues on Thursday, with former Transnet CFO Anoj Singh taking the stand from 10am, and former minister of public enterprises Malusi Gigaba appearing at 4pm. DM