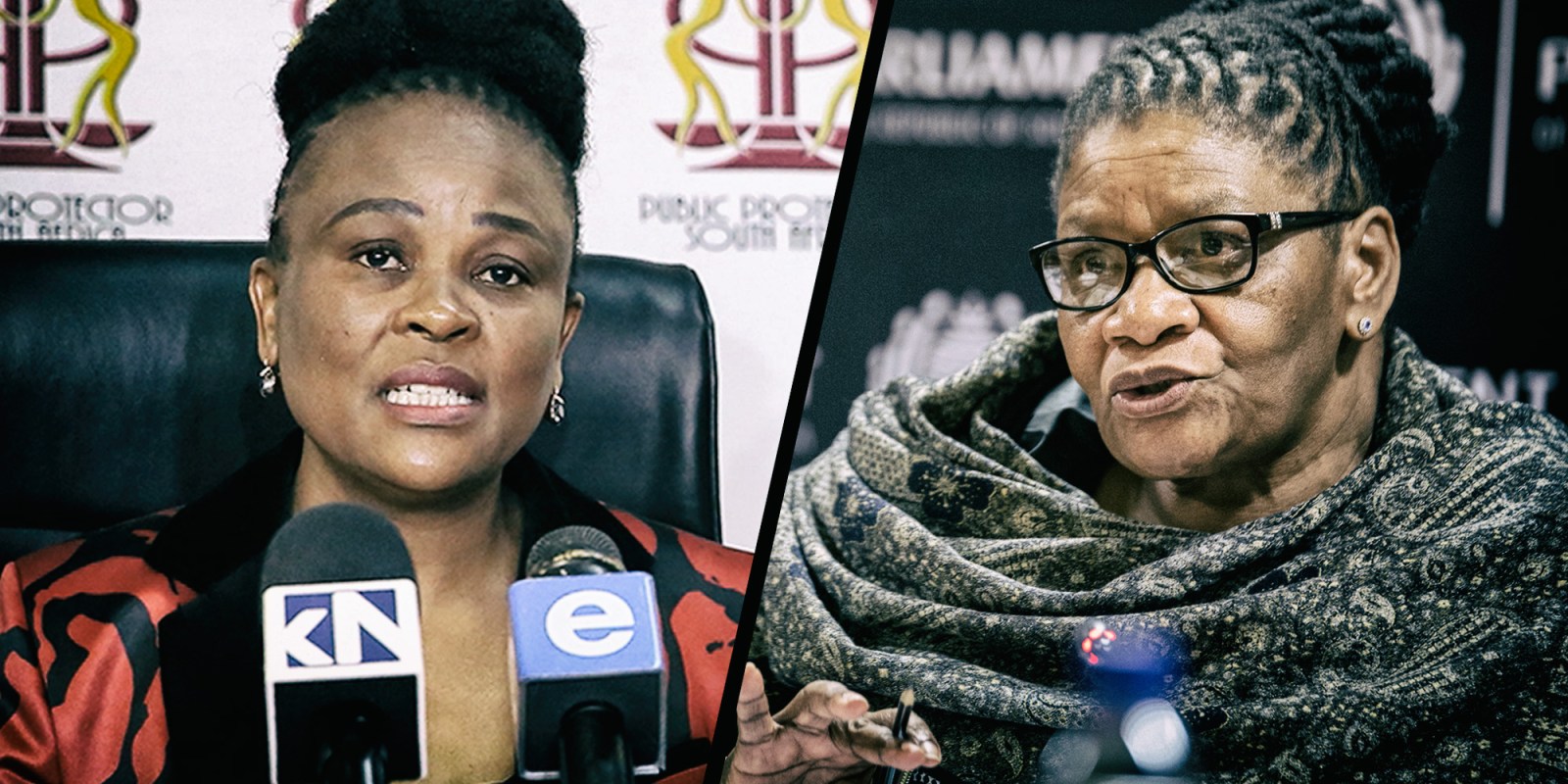 Public Protector Busisiwe Mkhwebane wants a punitive cost order against National Assembly Speaker Thandi Modise — and for her to also pay 20% of the Public Protector’s legal costs in the pursuit of having declared invalid parliamentary rules to impeach heads of Chapter Nine institutions.

Public Protector Busisiwe Mkhwebane has asked in her court papers for the Section 194 parliamentary inquiry into whether there are grounds for her removal from office to be declared invalid, suspended for six to 12 months or longer and for the National Assembly to redraft this rule alongside rules for holding the actual inquiry.

Mkhwebane has asked not only for punitive costs against National Assembly Speaker Thandi Modise, whose conduct, she says, has been “reckless, grossly unreasonable and in bad faith”, but also that “she must pay personally and to the extent of 20% of the costs of this application”, including three counsel.

Several times in her 50-page supplementary affidavit to the Western Cape division of the High Court, Mkhwebane describes Modise as acting recklessly, irrationally and unconstitutionally. In what appears to be a politically infused argument, Modise and the opposition DA are firmly linked in intent.

“… [T]here is ample evidence that the rules were drafted solely for the purpose of removing me from office, because of the DA’s vendetta against me. The Speaker has improperly aligned herself with the DA’s ulterior purpose and motive. This is first and foremost in breach of her constitutional duty of impartiality,” says Mkhwebane in her court papers.

None of this is necessarily unexpected. Since mid-2019, Mkhwebane has sent sharply worded correspondence to people including Modise, saying the Speaker had failed to protect her from MPs’ attacks. Modise had, just after the May 2019 elections, agreed to a request to revive the inquiry into Mkhwebane’s fitness for office by the then DA chief whip, John Steenhuisen, who had brought the initial complaint in 2017.

On Monday the Western Cape High Court started hearing legal arguments over the validity and constitutionality of that Section 194 inquiry rule, officially: “Removal from office of a holder of a public office in a state institution supporting constitutional democracy”.

It’s Part B of Mkhwebane’s challenge, which began with an attempt to get an interdict against the first steps of the 17-step impeachment process under the rules adopted unanimously in the House in early December 2019. The interdict application was rejected in early October 2020, when Judge Vincent Saldanha ruled that public interest and Parliament’s constitutional oversight responsibility prevailed.

On Monday, Mkhwebane’s advocate Dali Mpofu argued that the Speaker’s conduct had been “irrational”, “unfair” and “unconstitutional” right from the start when Modise in January 2020 approved the DA’s motion for an inquiry into the Public Protector’s fitness for office.

No one had told Mkhwebane about this, nor afforded her an opportunity to make representations, but public media statements were made. If the rules allowed this, it would make them unconstitutional. And if the rules did not allow this, such conduct was definitely reviewable, the judges were told.

As the process unfolded, questions needed to be asked about fairness, rationality and constitutionality, including limiting the right to legal representation and “outsourcing Parliament’s role”, as Mpofu put it, regarding the role of a retired judge chairing the independent panel to assess whether Mkhwebane had a case to answer.

According to the parliamentary rule, that stage is a preliminary one and while lawyers could be consulted, the person against whom the complaint has been laid is the one who must respond. The parliamentary rule outlines this independent panel review only as the first stage.

In a report dated 24 February 2021, the panel, chaired by retired Constitutional Court judge Bess Nkabinde, alongside advocates Dumisa Ntsebeza and Johan de Waal, issued a hard-hitting report, recommending an inquiry into Mkhwebane’s possible misconduct and incompetence. The panel dismissed many of the arguments Mkhwebane presented to them, much of it a repeat of what had been argued in the initial interdict application in 2020.

In court on Monday, it was again argued that it was unfair, irrational and unconstitutional to hold a parliamentary inquiry into matters that predate the adoption of the Section 194 inquiry rules.

If such retrospectiveness was upheld, it amounted to punishing the Public Protector for what the courts had already “punished [her for] in the form of punitive costs and verbal reprimands”, according to arguments put before the court.

Overall, the process also undermined the constitutional right to security of tenure and fair labour practice. Crucially, Mkhwebane, who raised the fact that Parliament did not have rules for the impeachment of heads of Chapter 9 institutions, now also raised the lack of rules of conduct for the Section 194 inquiry.

“… [T]he fact that there are no rules to determine or govern the procedure to be used at the hearing of the matter is in itself unconstitutional and creates a lacuna which needs to be addressed during the proposed period of suspension of the rules.”

Traditionally, parliamentary practice has embedded certain set procedures common across all committees. A committee is entitled to adopt its own working arrangements, according to Rule 167.

Traditionally, parliamentary practice means that even in an unprecedented matter such as removing from office the head of a Chapter 9 institution, the House takes decisions. The adoption of the independent panel report recommendation and the establishment of the Section 194 inquiry were adopted by a majority of votes in mid-March 2021.

But it has been a long, drawn-out, stop-start affair traversing two terms of Parliament. There were delays caused by the May 2019 elections, the five-week Covid-19 hard lockdown and the initial 2020 court interdict attempt.

The issue has been marked by politicking and, not insignificantly, factionalism in the governing ANC, which has yet to formally take a position in the matter.

In an election year, in addition, the focus lies on the campaign trail. So much so that political parties had failed to name their voting representatives on the Section 194 committee after a successful challenge by United Democratic Movement leader Bantu Holomisa that all 14 political parties represented in Parliament should have voting rights.

Last Thursday’s programming committee noted that with just a few exceptions, most of the 14 political parties represented at Parliament had missed the Tuesday deadline.

Legal argument from Parliament is expected on Tuesday. DM