Amid politics and politicking, it’s one step closer to the Public Protector’s impeachment inquiry 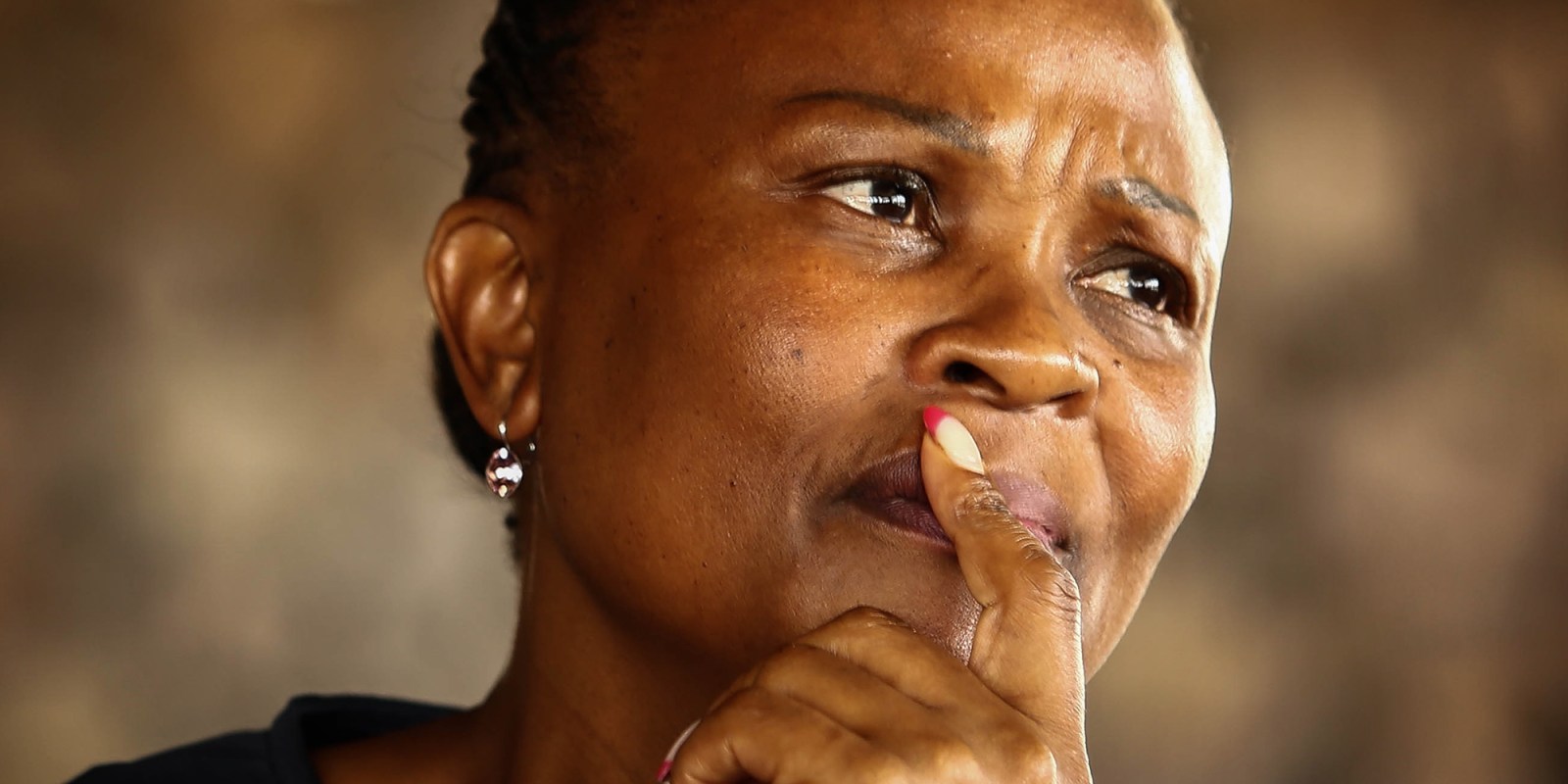 An unprecedented inquiry into the possible removal from office of Public Protector Busisiwe Mkhwebane was approved in the House on Tuesday. The convincing vote of 275 MPs for, 40 against and one abstention obscured some of the hard backroom politicking.

Public interest, and being public representatives, were the motivations of the ANC parliamentary caucus to back the establishment of a Section 194 committee to inquire into the possibility of the Public Protector’s removal from office.

That line would have been laid down in the ANC parliamentary caucus at 1pm, an hour before Tuesday’s sitting began. No matter how brief that ANC caucus may have been, the result was the ANC backed the motion to take the process into Public Protector Busisiwe Mkhwebane’s impeachment one step further.

The ANC contributed 168 votes in favour, alongside the DA’s 83. But while the largest opposition party got all but one of its MPs to attend, the ANC did not. Missing were 62 ANC MPs. While some may have been ill, or deployed elsewhere, this is a clear signal of the ongoing factional fights in the governing party around Mkhwebane.

“We are mindful we are dealing with a matter of public interest, and as public reps we must at all times be seen processing matters of public interest,” said ANC Deputy Chief Whip Doris Dlakude in closing the political party declarations ahead of the vote.

The ANC declaration focused on how Parliament is governed by “its own rules, which are in line with the Constitution”, and was careful to emphasis this vote was not a reflection in any way whatsoever on Mkhwebane, and how the inquiry committee would give the Public Protector the opportunity “to clear themselves and also make representation”.

It came to this point because an independent panel of experts, chaired by retired Constitutional Court Judge Bess Nkabinde, found sufficient evidence for Mkhwebane to answer a case of sustained incompetence and misconduct. The report was published on 1 March.

From the opposition benches, including the DA, IFP, Freedom Front Plus, African Christian Democratic Party and others, the appeal was to put aside party politicking in the interest of upholding and serving the Constitution.

The EFF opposed the motion, with its MP Natasha Ntlangwini describing the process as specifically targeting Mkhwebane and as the “prosecution of a black woman whose only crime was to demand accountability from the poster boy of white monopoly capital”.

This was a nod to President Cyril Ramaphosa, who successfully overturned Mkhwebane’s CR17 campaign funding report. On Tuesday another twist to that played itself out in court, as the EFF is seeking to unseal the campaign contribution bank statements.

From the podium in the National Assembly, Ntlangwini closed her declaration with: “We will see you in court.”

But perhaps the most curious statement came from Al Jama-ah MP Ganief Hendricks, who argued the matter should not proceed because ANC Secretary-General Ace Magashule had said so: “This is a street matter and the SG has spoken.

Al Jama-ah, with the two African Transformation Movement MPs and the 37 EFF MPs made up the 40 votes against.

The United Democratic Movement, which had argued against the inquiry, did not vote, nor did the National Freedom Party or African Independent Congress.

Politics was always going to be central in Mkhwebane’s possible impeachment. It’s a long process, with 17 steps and no timeframes or deadlines given, and several points of potential conflagrations along the way.

For the past 10 days or so ANC factional politicking emerged clearly in public with the so-called Radical Economic Transformation MPs making a play for the ANC to vote against the next step in the impeachment process on the basis the ANC did not support anything an opposition party proposes.

Last Thursday the ANC parliamentary caucus discussed its stance on the independent panel’s report recommending that Mkhwebane had a case to answer in a Section 194 inquiry.

“The Committee on Section 194 will conduct an inquiry for fairness and clarity, which will afford the Public Protector an opportunity to clear her name and respond to the wide allegations attributed by [the] Democratic Alliance’s motion.

“At this stage, the ANC Caucus is very clear, it will be premature to conclude whether there will be voting for retention or against the removal of the Public Protector.”

But it remained tense in the run-up to Tuesday’s item on the Order Paper, after the special 1pm ANC parliamentary caucus.

With Tuesday’s vote to establish a committee to inquire into Mkhwebane’s possible impeachment done and dusted, it remains unclear when that committee will be established, who will serve on it and similar parliamentary process details.

Earlier in March, ANC Chief Whip Pemmy Majodina tried to sidestep this political pickle by suggesting the independent panel’s report should only be noted in the House. Given parliamentary lingo, that effectively would have meant the end of the road for the report – and proceedings against Mkhwebane. But opposition parties shafted this because the rules on a Section 194 inquiry required “consideration, or the active approval or rejection”.

After it was agreed that the matter would be decided in the House on Tuesday, National Assembly Speaker Thandi Modise said it would be “a very sad day” if, given the report, the process did not move forward.

“We owe it to the country, to the institution [Parliament], to the individual involved to go through a process, in the end, we can all live with. For me, that is very important.”

At the programming committee on 11 March terse words were exchanged over how the House would vote on Tuesday.

But in the end, Tuesday’s session unfolded – just as word came that the Constitutional Court had dismissed Mkhwebane’s bid for direct access.

On Tuesday, Parliament welcomed the Constitutional Court’s order dated 10 March that Mkhwebane’s application for direct leave to appeal was dismissed because no case for direct access had been made.

Mkhwebane may well decide to go to the Supreme Court of Appeal. But Parliament’s Section 194 inquiry, named after the applicable section of the Constitution, into her possible removal from office will still go ahead.

Such a committee inquiry may play out for the next 2½ years until October 2023 when Mkhwebane’s non-renewable seven-year term as Public Protector ends.

The ANC parliamentary caucus dragged out the Nkandla saga for more than two years in different ad hoc committees. But in March 2016 the Constitutional Court found that Parliament had acted “inconsistent with the Constitution” and unlawfully by replacing the Public Protector’s remedial action with its own that absolved then-president Jacob Zuma from repaying just over R7.8-million for non-security upgrades at his homestead.

This may well be a caution to the governing ANC, particularly as it was punished in the 2016 local government election with the loss of Johannesburg, Tshwane and Nelson Mandela Bay Metro, and had to form coalitions to retain control elsewhere.

With Tuesday’s vote to establish a committee to inquire into Mkhwebane’s possible impeachment done and dusted, it remains unclear when that committee will be established, who will serve on it and similar parliamentary process details.

As no timeframes are attached to the impeachment inquiry, and with Parliament rising for a five-week recess to early May, it will be a waiting game. DM