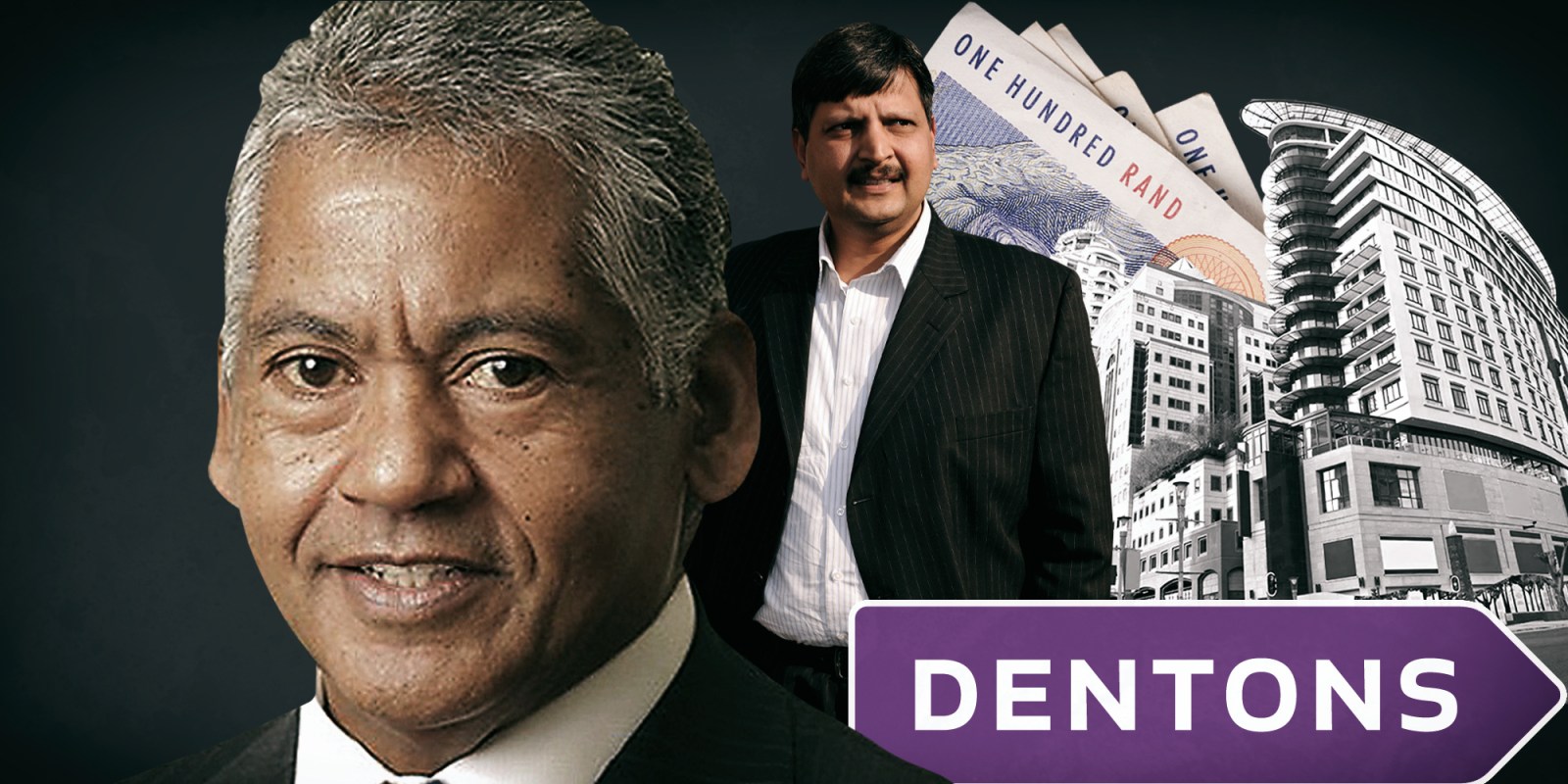 Law firm Dentons finds itself in unsavoury company following evidence at the State Capture Commission that it had paid nearly R2-million to a Gupta front company.

The multinational firm’s Africa CEO, Noor Kapdi, confirmed making payments to Fortime Consultants, but maintains that it was for certain marketing services provided. The payments came on the back of two multimillion-rand deals at Eskom and Denel in 2015.

Fortime is among a list of at least 14 first-level laundry vehicles in the Gupta network alleged to have received hundreds of millions of rands in kickbacks from companies such as Regiments Capital and Trillian Capital Partners after they landed government business.

Details of the Dentons payments to Fortime emerged at the Zondo Commission last month, but were overshadowed by the mind-boggling evidence presented by Paul Holden of Shadow World Investigations on 24 May 2021.

A transcript of Holden’s testimony at the Zondo Commission shows the payments were made shortly after Dentons clinched the two deals. One, labelled Project Picardi, was for R21.9-million at Eskom and another, Project Betty, was a R5.9-million parcel of work at Denel.

In both cases, the Zondo Commission heard, Kapdi claims that one Ashok Narayan had contacted him for payment. Despite early protestations by the Guptas, Narayan has been exposed as a senior Gupta lieutenant — and was recently spotted among the younger Guptas at events in Tashkent, Uzbekistan. (For background on Narayan, read this July 2015 article by AmaBhungane)

Holden testified to records showing Dentons paid Fortime R1.2-million after the Eskom deal and another R642,000 for the marketing services related to the Denel contract.

Kapdi is a founding partner of the local law firm, KapdiTwala. It joined the global Dentons family in 2014 and by the following year, Dentons SA opted for the unusual marketing exercise involving the Gupta letterbox company.

While payment for marketing services would not usually come up at the State Capture Commission which is investigating allegations of fraud and corruption in the public sector, the Dentons case appears to have awkward written all over it. For starters, Kapdi — according to the transcript of Holden’s evidence — claims he was approached by one Rafique Bagus, a former senior government adviser who later became chairman of the state-owned diamond mining company, Alexkor. 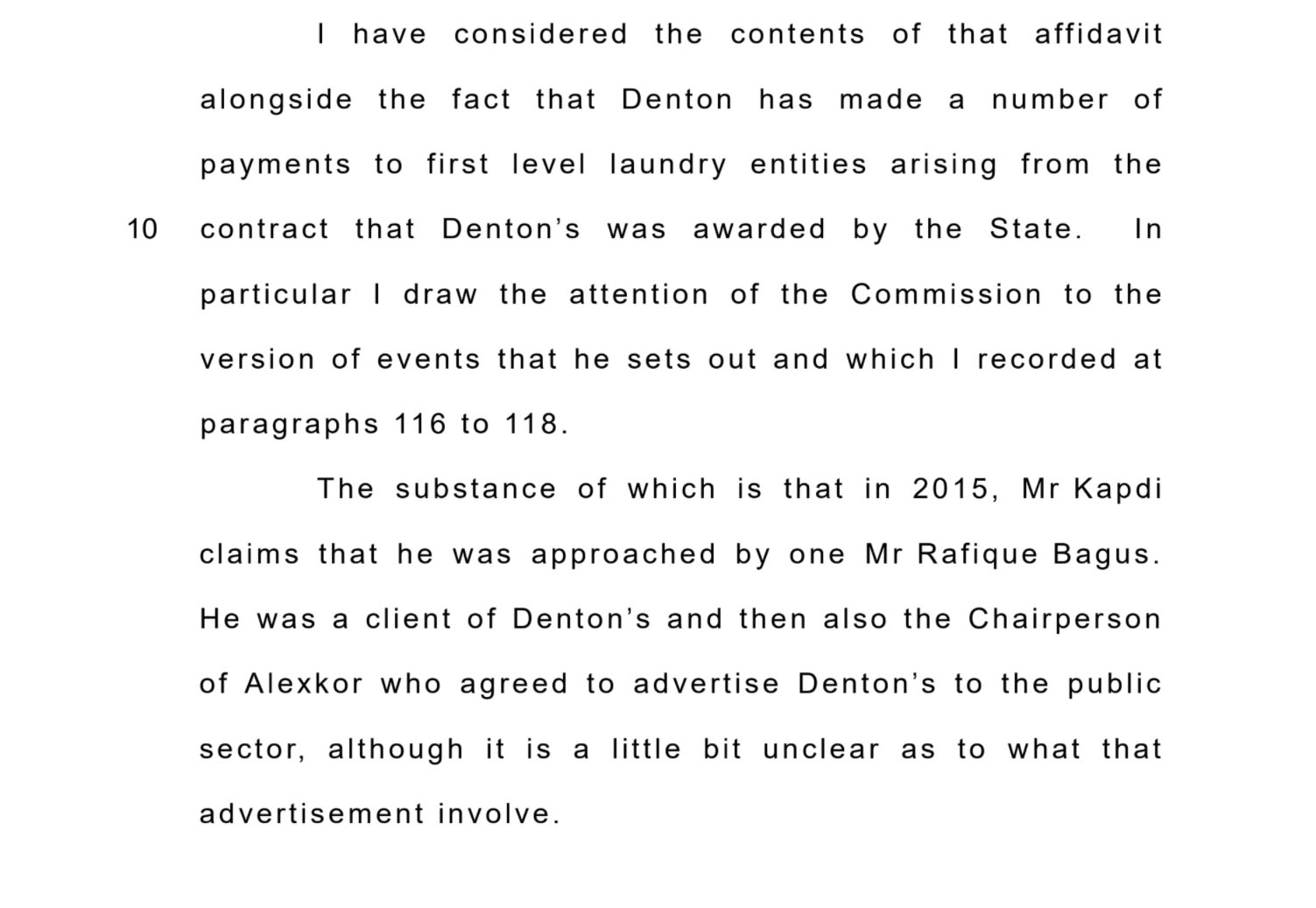 Bagus allegedly offered to market Dentons in the public sector although the nature of such services appears to have been uncertain. Once Dentons landed the Eskom job, Kapdi contacted Bagus to “thank” him for his services and offered to remunerate him, according to the transcript.

Holden, in summarising Kapdi’s affidavit to the commission, says Bagus allegedly said he didn’t require payment, but told Kapdi that someone else would be in touch. Kapdi then allegedly received the call from Narayan.

Daily Maverick was not able to obtain comment from Bagus, but has had sight of correspondence suggesting a striking difference of opinion between him and Kapdi over what transpired. It shows that Bagus confirms having introduced Kapdi to the Guptas. But he denies having offered to market Dentons at Eskom or having had a discussion with Kapdi about payment (something that may be misconstrued as Bagus having acted as a Gupta fixer).

In addition, Holden also told the Zondo Commission that the document governing the payments from Dentons to the Gupta front was “incredibly suspicious”, not least because the services provided were remarkably “vague and opaque”.

It was signed on behalf of Fortime by one Sabbir Ahmed (the transcript incorrectly lists the name as “Sabiya”). Holden said later evidence at the commission would place Ahmed as a director of several other companies allegedly active in the much “larger” money-laundering operation around the Gutpas.

Forsure is also among the various Gupta fronts that Regiments Capital and its offshoot Trillian Capital paid hundreds of millions to in alleged kickbacks from government deals. Regiments is battling the South African Revenue Service (SARS) after its payments to several letterbox companies (including Fortime) — billed as professional fees — were rejected as tax deductibles.

In the Regiments case, SARS said Chapter 2 of the Prevention and Combating of Corrupt Activities Act provided for the criminalisation of gratification paid to promote, execute or procure any contract with a public entity.

It is unclear whether Dentons or Kapdi intend to apply to cross-examine Holden, but it would be extremely important for the firm to divulge the nature of any due diligence done on Narayan or Fortime at the time.

Kapdi submitted an affidavit to the commission, but told Daily Maverick he was not able to share this November 2020 document out of respect for the process under way. He referred questions to the law firm’s global communications office. Among the questions Daily Maverick asked the world’s fifth-biggest law firm was whether it had investigated the payments and if it was satisfied that they were not kickbacks relating to the two contracts.

Dentons did not address individual questions posed and sent a short statement asking it be attributed to Kapdi. It reads:

“The Commission is in possession of my statement. Despite that, there are gaps and inconsistencies in the testimony in several respects.

“Most importantly, it failed to note that the work we did for Eskom and the resulting Denton’s Report were publicly acknowledged several years ago (including in the media) as a leading example of an exposé on state capture — and we are very proud of this work.

“While we respect the work of the Commission we will in due course formally write to the Commission to register our disagreement and reject the implied links between Dentons and state capture.”

Holden is expected to resume his testimony later in June.

The inquiry began in August 2018, but is scheduled to wrap up in a few weeks when President Cyril Ramaphosa is expected to step into the witness box as the final witness. DM