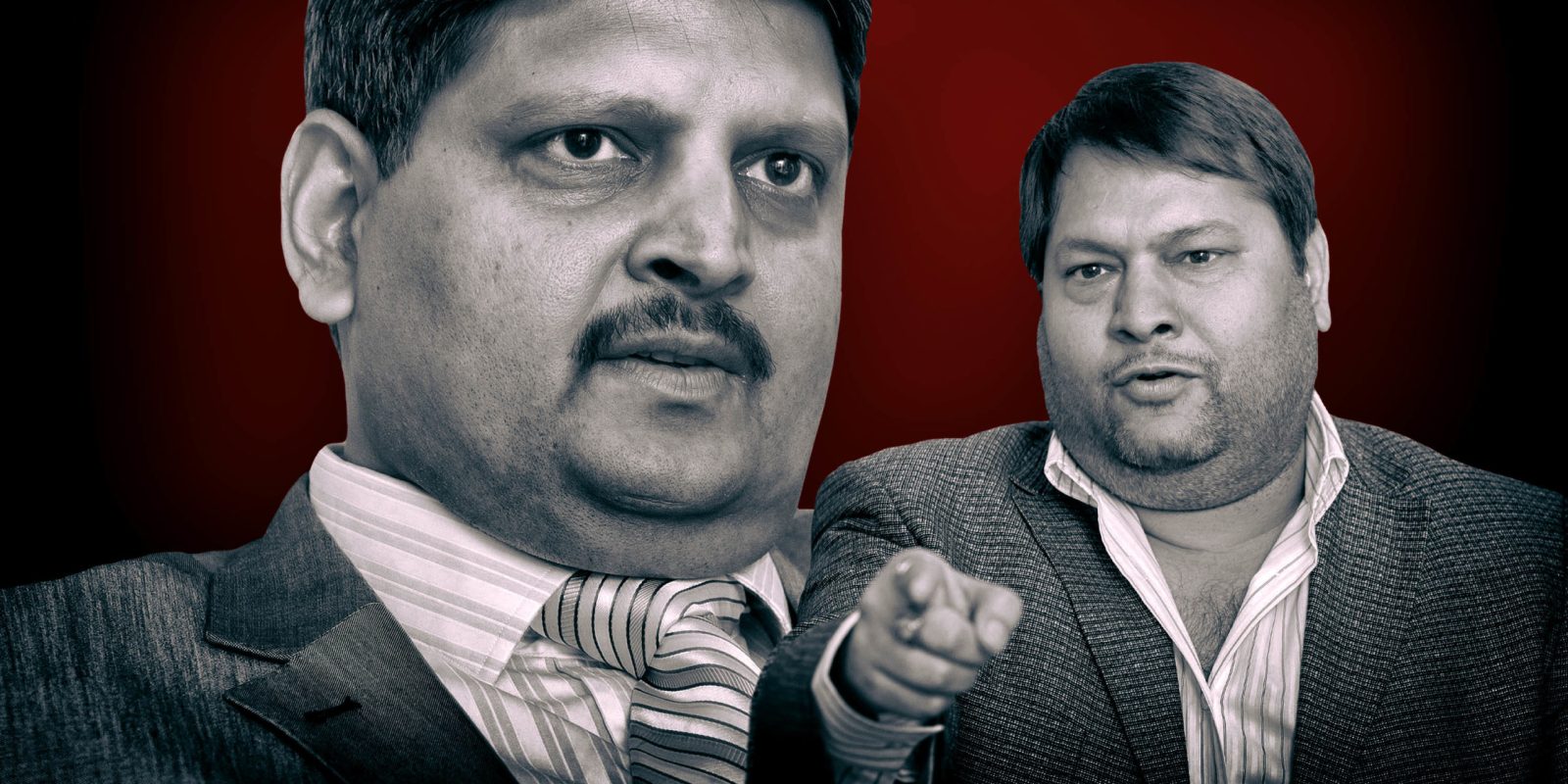 Appearing before the Zondo Commission on Monday, investigator Paul Holden meticulously laid out the flow of money from government entities to the Guptas’ money laundering apparatus. Almost R50bn can be traced through invoices and bank statements – but, warned Holden, the true cost to the state is definitely higher.

That was the phrase of the day at the Zondo Commission on Monday, when the inquiry into State Capture was taken through the dizzying flow of state funds into Gupta coffers via dodgy contracts.

Paul Holden, who runs the NGO Shadow World Investigations alongside former ANC MP Andrew Feinstein, made his second appearance at the commission to present the hard figures associated with the Gupta family’s capture of the South African state.

Holden read into evidence amounts running to 10 or 11 figures before the decimal point.

What was on display was not just the quantum of plunder, but also the efficiency of the Guptas’ vast and sophisticated money laundering machinery.

To give one example: on 29 April 2016, a Gupta-linked company called Cutting Edge Commerce submitted an unsolicited proposal to Eskom to provide the unusual combination of “data management and cleaning services”.

Noted Holden: “[This] unsolicited proposal produced a payment of R71-million in 17 days.”

Pointing out that this time period included weekends and even one public holiday, Judge Zondo observed wryly: “This must really be a record.”

The Guptas made use of no fewer than 14 companies which Holden referred to as “first-level laundry vehicles”: the initial steps in what was ultimately an international money-laundering scheme. Those companies were: Homix, Maher Strategy, Medjoul, Albatime, Birsaa Projects, Fortime Consultants, Forsure Consultants, Matson Capital, Pactrade, Shacob Commerce, Jacsha, Chivita Trading, Block Mania and Ismer.

There was “definitely a sense of momentum” as the years went by and the efficiency of the Gupta enterprise increased, said Holden. 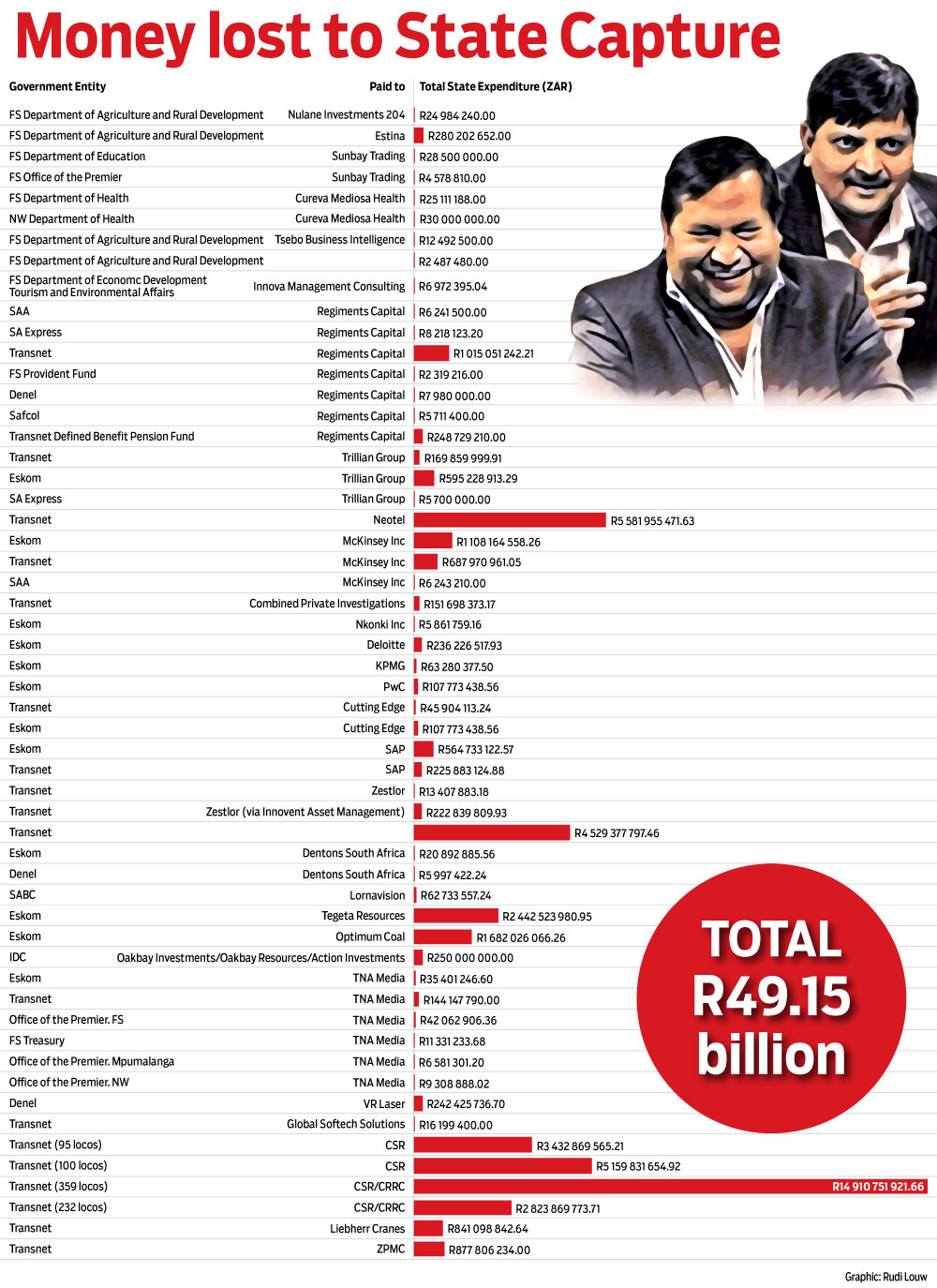 The investigation has revealed that the three primary sites of State Capture were Transnet, Eskom, and the Free State provincial government.

Transnet, for most of the time in question under the stewardship of former CEO Brian Molefe, was responsible for a monstrous 81.59% of payments relating to State Capture: R40,084,201,927.00. A substantial portion of this derived from contracts for Chinese locomotives, coming in at R26,327,322,915.50.

Molefe, who has emerged as one of the key figures in State Capture, was also CEO of Eskom between 2015 and 2016, before being succeeded by similarly implicated Matshela Koko. Eskom accounted for 14.19% of State Capture expenditure. Much of this – involving issues like coal supply – has been well documented, but Holden also pointed out that by 2017, Eskom was overspending on IT providers to such a degree that it required its budget to be increased by 230%.

The Free State provincial government shelled out R441,042,621.08 on Gupta contracts, or 0.90% of the total State Capture spend. Specifically implicated in this spending is the office of the provincial premier – throughout this period, one Ace Magashule.

As jaw-dropping as these figures are, Holden was at pains to point out that they are, by necessity, incomplete.

For one thing: “The commission has identified payments aggregating to just over R102-million made to Sahara [Computers] by organs of state who have been unable to produce evidence to the commission to show that these payments were made in terms of acceptable procurement practices,” Holden said.

There is, however, no firm evidence that these Sahara payments were the product of irregular procurement practices – so they have been excluded from Holden’s total “in an abundance of caution”.

In other respects, the amounts presented by Holden do not “even begin to quantify the harm and loss suffered by the state”, the investigator said.

He gave the example of expenditure where there was almost no real attempt to deliver any value to the government at all: the payment of R254-million by the Free State government to The New Age newspaper, for instance, or the entire Estina Dairy project in the same province.

Where the state did receive some goods or services from Gupta companies in exchange for payment, it was massively overcharged – something possible because of the absence of competitive bidding processes. The Guptas’ Sunbay Trading company was paid R33,078,810 by the Free State government to supply laptops: a unit price which was double that charged to corporate clients.

There were also occasions on which the goods or services provided by the Gupta companies were of such a poor quality that this caused additional losses to the state. Holden cited the example of the losses sustained by Eskom after the Guptas purchased the Optimum coal company. He pointed out that Eskom is claiming damages from Optimum for poor quality coal, delivered in insufficient quantities, amounting to R3-billion.

The investigator said that another way in which the state lost out was that other suppliers may have been paid more than was necessary in order to disguise the discrepancy between these payments and those made to the Guptas. Holden said that when it came to the locomotive contracts entered into by Transnet, GE and Bombardier were offered more favourable terms than was warranted by the parastatal – because to fail to do so would expose the exaggerated amounts being paid to Chinese companies to generate kickbacks.

Of particular concern to Judge Zondo was the fact that some of the irregular payments presented by Holden were made after the release of former Public Protector Thuli Madonsela’s State of Capture report in November 2016.

“These transactions were continuing as if there was nothing,” mused Zondo in apparent disbelief. DM