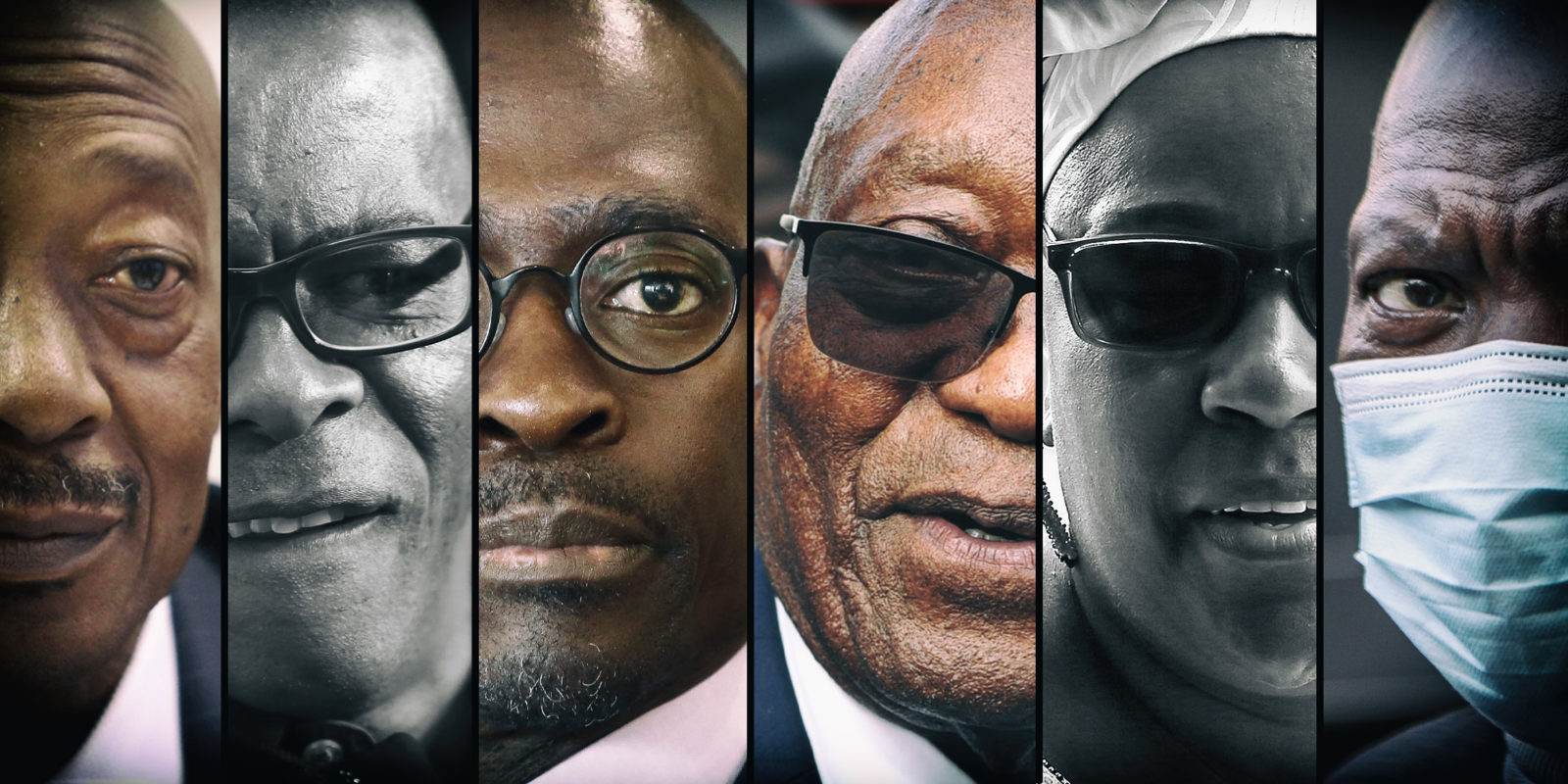 The tone for the country’s political week was set by the testimony of investigator Paul Holden to the commission on Monday, 24 May – an endless recital of figures with astounding amounts of zeros, millions and millions of taxpayers’ money laundered through the Gupta washing machines.

Dawn broke on Wednesday, 26 May 2021, with the announcement of an urgent press conference by the Minister of Health, Zweli Mkhize, followed swiftly by former president Jacob Zuma finally being asked to plead to corruption charges, an event which coincided with former SARS boss Tom Moyane’s turn at the Zondo Commission.

And that was before noon on just one day.

Mkhize’s early morning presser announcement was to acknowledge that the Digital Vibes contract, exposed by Daily Maverick’s Scorpio investigative team member Pieter-Louis Myburgh, was indeed irregular and corrupt. This after the Department of Health (DoH) had asked “for a few days to think about the matter”.

In the face of irrefutable evidence, Mkhize acted swiftly, saying he was no friend of Tahera Mather (his former PA) and Naadhira Mitha, who received R150-million from the DoH to do their work for them.

The tone for the political week in the country was set by the testimony of investigator Paul Holden to the commission on Monday, 24 May – an endless recital of figures with astounding amounts of zeros, millions and millions of taxpayers’ money laundered through the Gupta washing machines.

By midweek, the ANC – the governing party – had become the butt of jokes, memes and Tik Tok  (our favourite was @ZethuZethu, of course) postings across South African social media platforms.

Former SAA board chair, Dudu Myeni, made an early evening appearance before the Zondo Commision on Tuesday after attempting to duck it earlier in the day. Had to rush to an alleged family event in Richards Bay apparently. Short notice and what what.

Deputy Chief Justice Raymond Zondo would have none of it and Myeni was instructed to get her arse to her lawyer’s office in Pietermaritzburg tout de suite.

When Myeni, who Zondo kept waiting for about an hour, later stated she would be replying to her cross-examination in isiZulu, someone in the peanut gallery over on YouTube, which tunes in daily to watch Zondo proceedings, responded “but she was stealing in English”.

On Wednesday, after Mkhize’s admission earlier in the day and which was broadcast live on several platforms, a Soweto motorist called into SAfm shouting “look, I don’t care about the protests and the road blockade. People are going to vote for the same party again and again. I just want Rob Byrne to tell me what routes and traffic jams to avoid.”

It all began when Holden, Zooming from London, read each amount that made up the money flow to Gupta entities from South African SOEs to Zondo like a roll call of the nameless dead in a war.

The final estimated total (without tip) the country gifted to the Gupta brothers is R49,157,323,233.68 Holden calculated.

Powell told the commission that a subpoena of Kodwa’s bank accounts had revealed multiple transfers from EOH’s Jehan Mackay between May 2015 and February 2016. On one such occasion, in February 2016, Mackay deposited R30,000 in Kodwa’s account to take it out of arrears.

Kodwa’s stay in the ultra luxury Villa Barbados in Camps Bay was also sponsored by sugar daddies EOH. Powell said the deputy minister was one of a number of “influencers, middlemen, intermediaries” used by EOH between 2015 and 2017 to help it win lucrative state tenders.

In total, EOH made payments of more than R15-million to the ANC and suppliers, seemingly for the same purpose.

Kodwa and his ANC colleagues are accused of intervening in support of EOH in at least three procurement processes: a Home Affairs Department tender, an Eastern Cape document management tender, and a Sassa (South African Social Security Agency) ICT tender worth about R90-million.

On the same day everyone got all up in Kodwa’s business, acting ANC secretary-general, Jessie Duarte, announced the party’s national working committee decision to consider disciplinary action against Ace Magashule, Tony Yengeni and Carl Niehaus for their delinquent behaviour at former president’s Zuma’s appearance at the Pietermaritzburg court.

The party is going to give them a bonus 60 days to continue behaving badly before instituting “disciplinary action” which will be guided by a “national presenter”. The as-yet-unnamed presenter will table a report to the party’s national executive committee, who will in turn refer the matter to the national disciplinary committee.

The party was also challenging Magashule’s South Gauteng High Court application to have his suspension declared invalid, said Duarte. The matter will proceed on 1 June.

Also on Tuesday, global consulting firm, McKinsey announced that it would be repaying R1-billion to the state, the proceeds the company unlawfully received from Eskom and Transnet deals.

As Scorpio’s Pauli van Wyk wrote in our Insider Newsletter this week, “In 2017, as part of the #GuptaLeaks, Susan Comrie from amaBhungane and I, on behalf of Daily Maverick’s investigative unit Scorpio, delved deep into what became known as the The McKinsey Dossier and the crimes perpetrated against the South African people.”

Four years later McKinsey has paid back the money thanks to the relentless work by journalists, and not the country’s law enforcement agencies.

On Wednesday, former president Jacob Zuma was finally asked the question “how do you plead” when charges of corruption, fraud and racketeering related to the Arms Deal were finally put to him.

He pleaded not guilty, of course, and maintained his defence that the prosecution all stemmed from actions by foreign agencies, the CIA in particular, to target him politically.

More or less the same time Zuma was slipping into the dock, former SARS Commissioner Tom Moyane continued to bleat that all accusations against him were part of a plot.

Nonetheless, evidence leader advocate Alistair Franklin grilled Moyane on his relationship with Bain & Co, which has been found by the Nugent Commission to have conspired with Moyane to weaken SARS.

The company itself issued a statement to the Nugent Commission saying “it has become painfully evident that the firm’s involvement with the South African Revenue Service (SARS) was a serious failure, for South Africa and SARS, and clearly for Bain too”.

The Commission and Nugent’s finding, said Bain, “have laid bare the disarray in which SARS now finds itself, with both morale and performance severely damaged. Contributing to that outcome was not the intent of the Bain project and we clearly made significant errors of judgement in taking on this work.”

Moyane insisted that SARS had done superlative work under his watch and that his demise could be blamed on Pravin Gordhan.

The dust from the circus of ANC rogues was kicked up the week of 20 May when Norma Mngoma, estranged wife of former minister Malusi Gigaba, revealed the depth of her husband’s indebtedness to the Gupta brothers and how he did their bidding.

So much so they literally gave him headaches as he bent over backwards to accommodate them.

Ms Mngoma, as she preferred to be referred to, spoke of long shopping trips, lunches and facials with her husband in Sandton, revealed her husband had over 200 fancy suits, that he had secreted out in a leather bag, loads of cash from the Guptas’ Saxonwold vault and that her husband had often called on Guptas to help out his family members including his sister and father.

The couple paid for nothing, the country heard, apart from a DStv subscription. She also indignantly told Zondo that her spending limit was around R100,000 and that her husband had given her a credit card with a R3,000 limit.

As the Commission of Inquiry into State Capture rushes to finish its work and as the ANC which Jacob Zuma grew during his decade-long ruinous tenure unravels in full public view, the ANC that is left behind is, for now, a national laughing stock, the butt of jokes and ditties as the nation comes to terms with the trauma that it has visited on country. DM