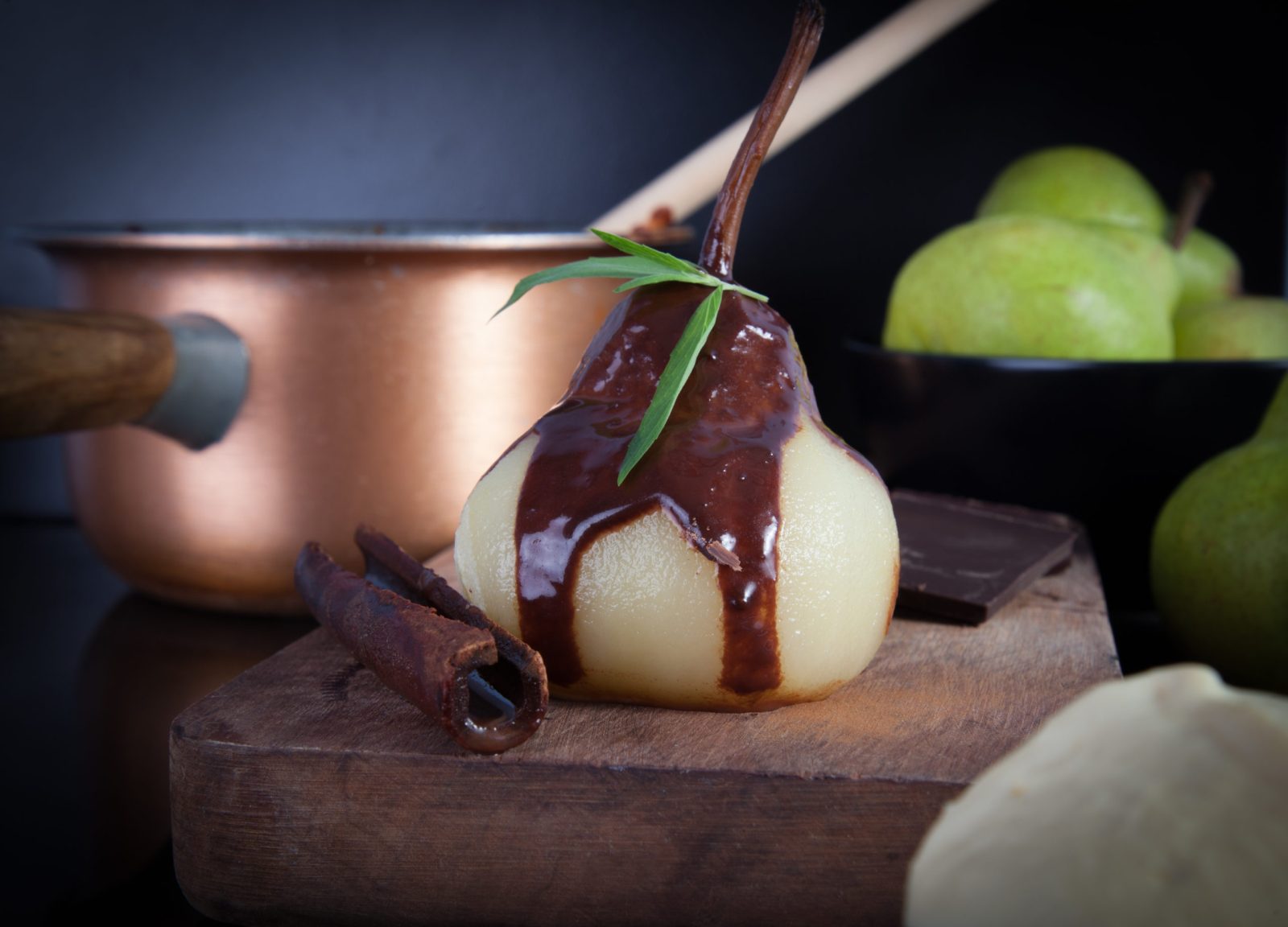 Let’s make Pears Belle Hélêne by poaching our own pears, making our own French-style vanilla ice cream, and finishing it with a sinfully sensual homemade chocolate sauce.

This recipe accompanies this story.

Whisk the egg yolks in a metal bowl with ½ cup of the sugar until well creamed (a paler yellow). Set aside.

I used my little French heavy copper pot that my daughter bought me in France years ago for the next step; just use a suitable heavy pot. Add to it the cream, milk, remaining sugar and a touch of salt, on a low heat. When it is simmering, stir until the sugar is fully dissolved. Then, in a fine stream, pour it slowly into the beaten eggs while whisking briskly, until all combined. Return to a low heat and stir while it thickens and coats the back of a spoon. It must not boil, so keep an eye on this step until it is complete.

Most recipes will tell you that now it must go in a churner, but here’s what I did: place a metal bowl in a bigger bowl of well-iced water with lots of ice cubes in it. Whisk the mixture vigorously for 10 minutes or more while it cools down. Place in the coldest part of a freezer, covered with cling film. After every half hour I went back and whisked it some more, for, say, two hours. That’s as much churning as I found it needed, but if you own an “ice cream maker”, whatever that is, you’ll know what to do. Me, I’m an old-fashioned boy.

Peel and core the pears, but only core them until just below the stem, so that the hollow will not be seen when it is plated (so, core from underneath the pear and not all the way through). Put half a cup of sugar, water and cinnamon sticks in a deep pot and bring to a boil, and cook gently until the syrup thickens and becomes golden. Stir in the remaining water and immerse the pears using a slotted spoon. Be careful not to damage the pears and make sure they are well covered with the sweet cooking liquid.

They should cook at a gentle simmer in about 15 minutes. Cool in their liquid.

Break chocolate pieces into a metal bowl over simmering water. Add the sugar and coffee and stir constantly while the chocolate melts and everything combines. Stir in the cream.

To plate: Stand a pear upright on a plate. Pour some chocolate sauce down one side from the top. Add a scoop of ice cream on the side. DM/TGIFood