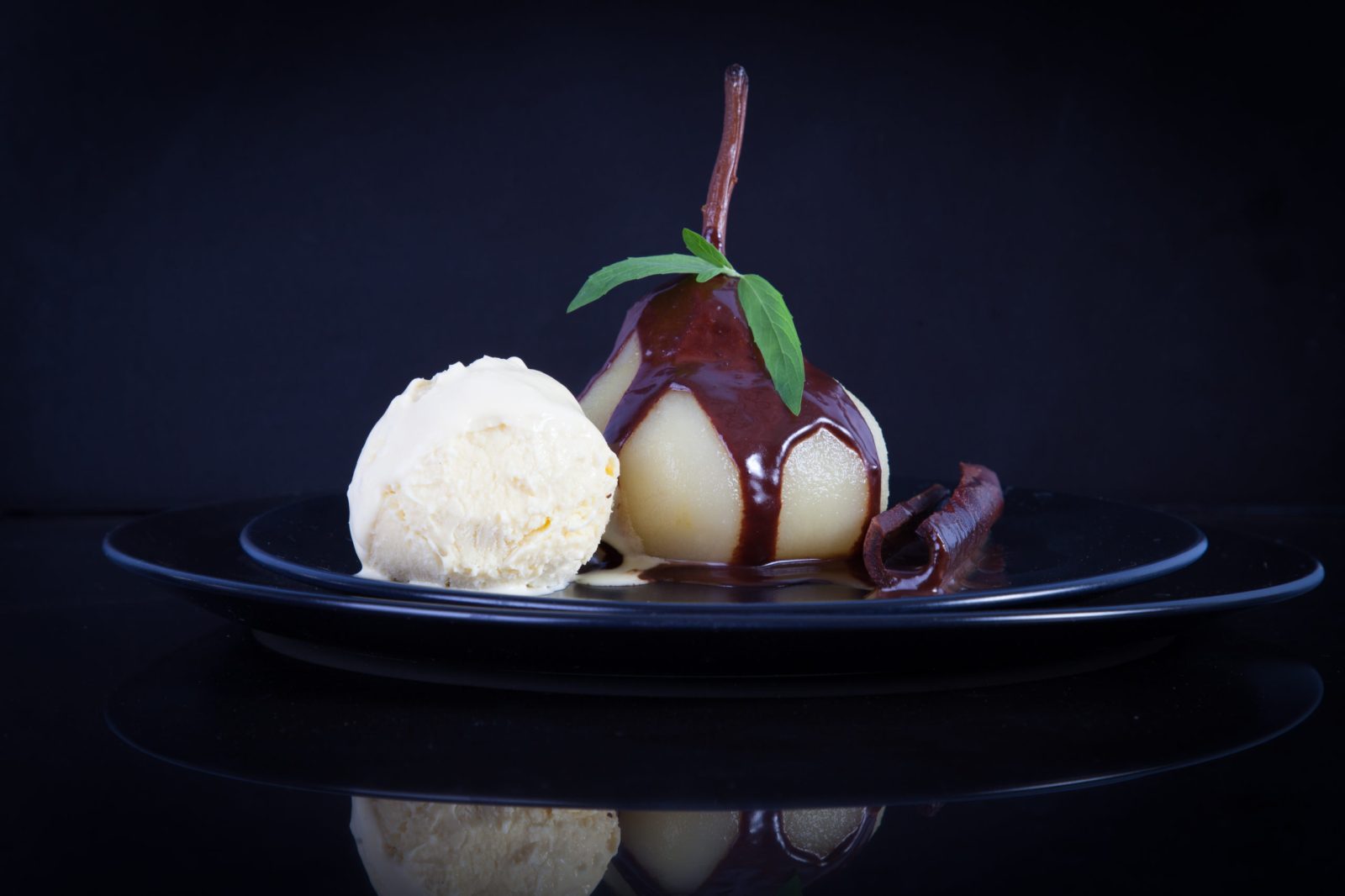 Making a true Escoffier classic was the best thing Tony Jackman did all week. Even the ice cream is French.

This piece goes with this recipe for Pears Belle Hélène.

Auguste Escoffier created many dishes but he also created the modern restaurant industry, and all the innovation that came with it. So perhaps we should not be embarrassed that the dessert he is perhaps most famous for, Poires Hélène, should have changed just a little over the years and decades since he invented the dish in the 1860s.

Even the name has altered slightly. In his own book, Ma Cuisine, he uses only the two words, but for as long as I can remember whenever I’ve seen it on old-fashioned restaurant menus it has been called Pears Belle Hélène. Escoffier named it after the French operetta La Belle Hélène by Jacques Offenbach.

Escoffier’s recipe for his other arguably most famous dessert, pears Melba (although peach Melba became more common) was almost identical, only swapping raspberry purée for the violets.

Today, many recipes include a cinnamon stick, or even two. Then, the only aromatic was vanilla. A pod, of course, or the scraped seeds thereof. Many modern chefs do still honour the original tradition of using only vanilla, but to use a different, or an additional spice, should not be deemed inappropriate. Flaked almonds are sometimes added today too. I think that takes something away from the intrinsic simplicity of the dish.

Americans sometimes slather it in “hot fudge sauce” and celebrate the dessert with an annual Pears Hélène Day on March 15. At least they don’t pour the ubiquitous “hot sauce” over it, as far as I know, though I’d put money on that being a thing. (Oh no no no, don’t try it, please don’t, forget I said that.)

Which is not to say innovation is not appropriate. Modern chefs have inherited an industry, in direct line as it were, from the man who set it all up when he used his former military experience to establish what today is known as the kitchen brigade system, a slick, strict discipline of rank and order designed to ensure that your plate of food is cooked properly, has everything on it that it should, and arrives in front of you hot and neatly dressed. That is no small feat. But chefs are creative, artistics creatures, by and large, and having inherited all that, they have a right to fiddle a little to give it their own touch. Light, one hopes. If it’s changed beyond recognition, it becomes a different dish and needs its own name. And please, please, no “deconstructed”. (You know, a flat pear on a plate, a jug of choccy sauce, a splodge of roomys, a blob of something or other, most probably a jelly. That fad needs to die a fast death, soon)

Pears Belle Hélène is not just “pears with chocolate sauce”. It has more finesse than that. You can grab a can of pears, plonk them on a plate, and squeeze commercial chocolate dessert topping over it if you like. You can. I hope you don’t. It will be far from the best it can be.

How difficult is it to poach a pear anyway? You need only a few pears, water, sugar, and a vanilla bean. And a cinnamon stick if you like. Add heat, then add pears that you have neatly peeled and cored, let it simmer at a moderate boil for 15 minutes, and let them cool in their syrup. You have poached pears.

To make a homemade chocolate sauce is greatly rewarding, and it will be a dozen times more delicious than that commercial brand. And you’ll have the glow of achievement as you eat and you watch the eyes of your guests rolling with pleasure while you notice that their own sighs of pleasure are bordering on the need to tell them to get a room.

The combination of that silky chocolate sauce and the sleek freshness of the pear as you peel away a sliver of it with your spoon is a fine one, but there’s one more element on your Poire Hélêne plate. The ice cream.

There’s a whole world of difference between just scooping out a portion of vanilla ice cream from the tub in the freezer, and making your own. But how about making it the old-fashioned way… or even the old-fashioned French way…

I often remember the vanilla ice cream from my childhood. There was something about it. No store-bought “vanilla ice cream” today is anything like that, not even the supposedly “quality” ones. Some come closer than others. But here’s the thing: the old ones were largely custard-based, and that is the French way.

So, let’s make Pears Belle Hélêne by poaching our own pears, making our own French-style vanilla ice cream, and finishing it with a sinfully sensual homemade chocolate sauce (find the recipe here). Escoffier will surely smile in his grave. DM/TGIFood