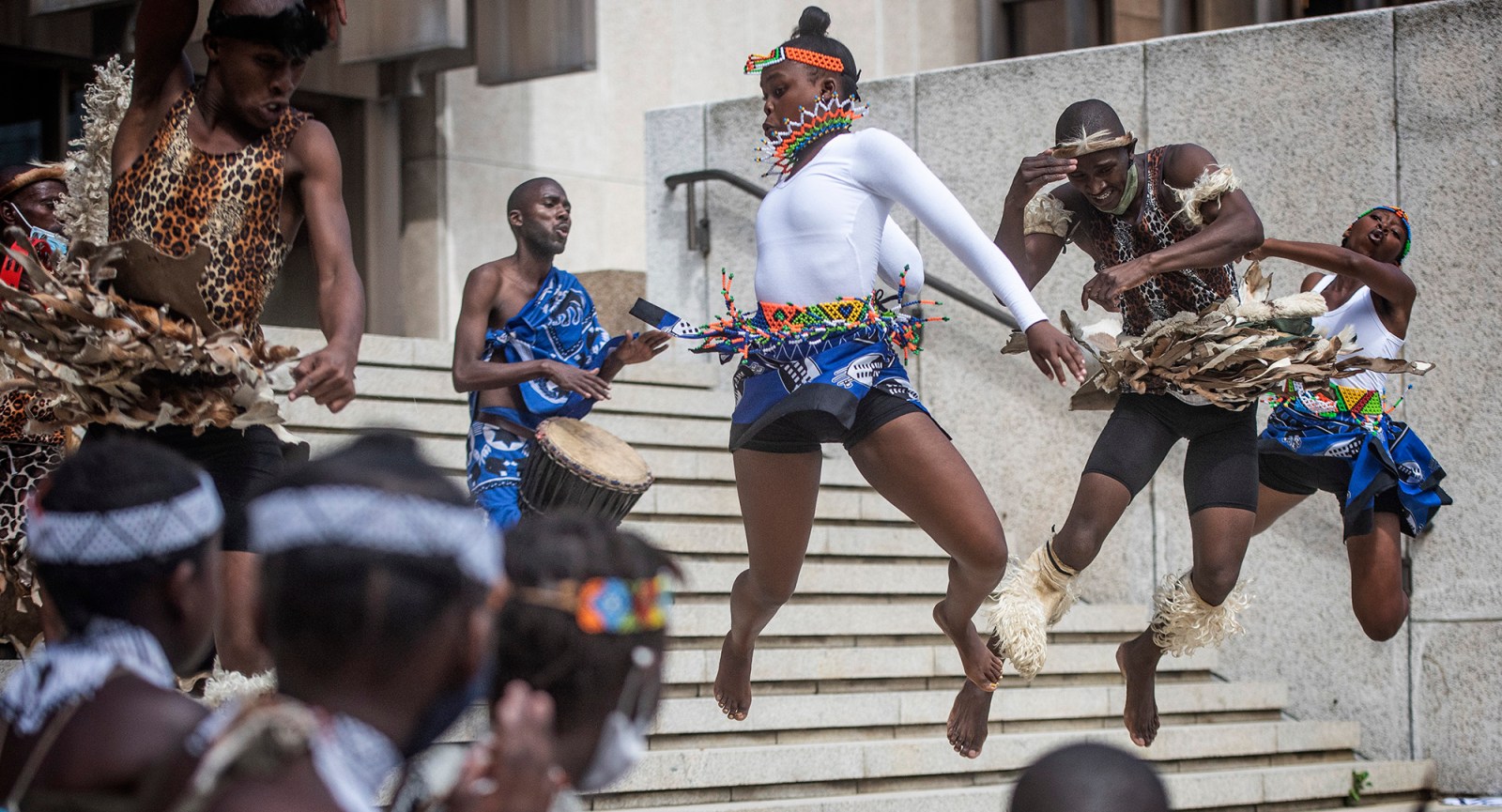 Likhwezi from Nyanga during the Cape artists protest against the National Arts Council and the Department of Sport, Arts and Culture at the Artscape Plaza in Cape Town on 27 March 2021. (Photo: Gallo Images / Brenton Geach)

In an interim order, Judge Willem Wepener on Tuesday ordered the National Arts Council (NAC) to pay the National Arts Festival (NAF) R3.4-million within 72 hours and that the revised grant notification letter sent to the NAF reducing the grant money is suspended with immediate effect.

Talking to Daily Maverick ahead of the hearing on Tuesday which was heard virtually in the South Gauteng High Court, Monica Newton, the NAF’s CEO, said that the NAF was notified in January that it had been awarded R8-million for three projects from the Presidential Employment Stimulus Package (PESP). The projects were:

In the initial contract that the NAF entered into with the NAC, the NAC said that the organisation should expect R5.6-million within three weeks. The NAF immediately started working on its projects with the expectation that it would receive payment soon. The contract also stipulated that all the projects needed to have been implemented by 31 March.

To date, the NAC hasn’t paid the NAF.

At a Zoom meeting in late February between the NAC and the arts sector, the sector was informed that there wasn’t enough money for the 1,215 approved applicants. To resolve this, the arts council would renege on its contracts with about 600 beneficiaries who’d signed their contracts.

The decision to reduce the money allocated to PESP beneficiaries was because “the PESP Funding was oversubscribed and the generous allocation of R300-million by our National Government proved insufficient to meet the demands of the sector”, reads the NAC’s statement.

The NAC’s decision to renege on contracts that it had entered into with the 600 beneficiaries led to artists staging a sit-in at the NAC’s Johannesburg offices. Creatives have been at the NAC offices since 3 March.

After receiving the revised grant notification letter, Newton said that the NAF, alongside other organisations, met the NAC’s council “and we said, we understand your circumstances, but also understand ours. We’ve already started work, we’ve entered into binding contracts, we’ve employed people, we’ve procured equipment.”

But by the first week of March, the NAC sent the NAF a revised grant notification letter, this time saying the total for NAF’s three projects would be R3.4-million.

“We told the council that we could cope with a 20% cut, but you can’t cut us by [about] 50%. They didn’t accept [our proposal] and we really felt that the only way for us to get relief was through the courts,” Newton told Daily Maverick.

The NAC also informed beneficiaries that by not signing the new contracts with the reduced amounts, they would be forfeiting their grant.

Another organisation taking the NAC to court for reneging on the original contracts is ASSITEJ SA, an arts organisation. A statement from ASSITEJ SA, says it, alongside Afrika Burns Creative Projects and Unima South Africa, is headed to the Western Cape High Court to ask the court to review and set aside the “resolutions by the NAC to unilaterally reduce promised funding”.

Despite the legal actions taken against the NAC, it has told the sector in Zoom meetings that it is working tirelessly to ensure beneficiaries are paid. According to the NAC’s statement, by Tuesday, 31 March R84-million had been paid to 639 beneficiaries.

With the slow pace at which the NAC is paying beneficiaries, the NAC has extended the deadline for the completion of projects to the end of May.

At a media briefing on Monday, Nathi Mthethwa, Minister of Sport, Arts and Culture, said that the stimulus package had been mismanaged by the NAC. After the new council was inducted in January, “they discovered that the budget as allocated was mismanaged by the NAC, mainly by way of an over-commitment of the available funds by more than double the allocated amount in their possession”, said Mthethwa.

Mthethwa announced that a forensic investigation would probe the mismanagement of the stimulus package.

“We haven’t seen the order yet, therefore I cannot comment…” DM