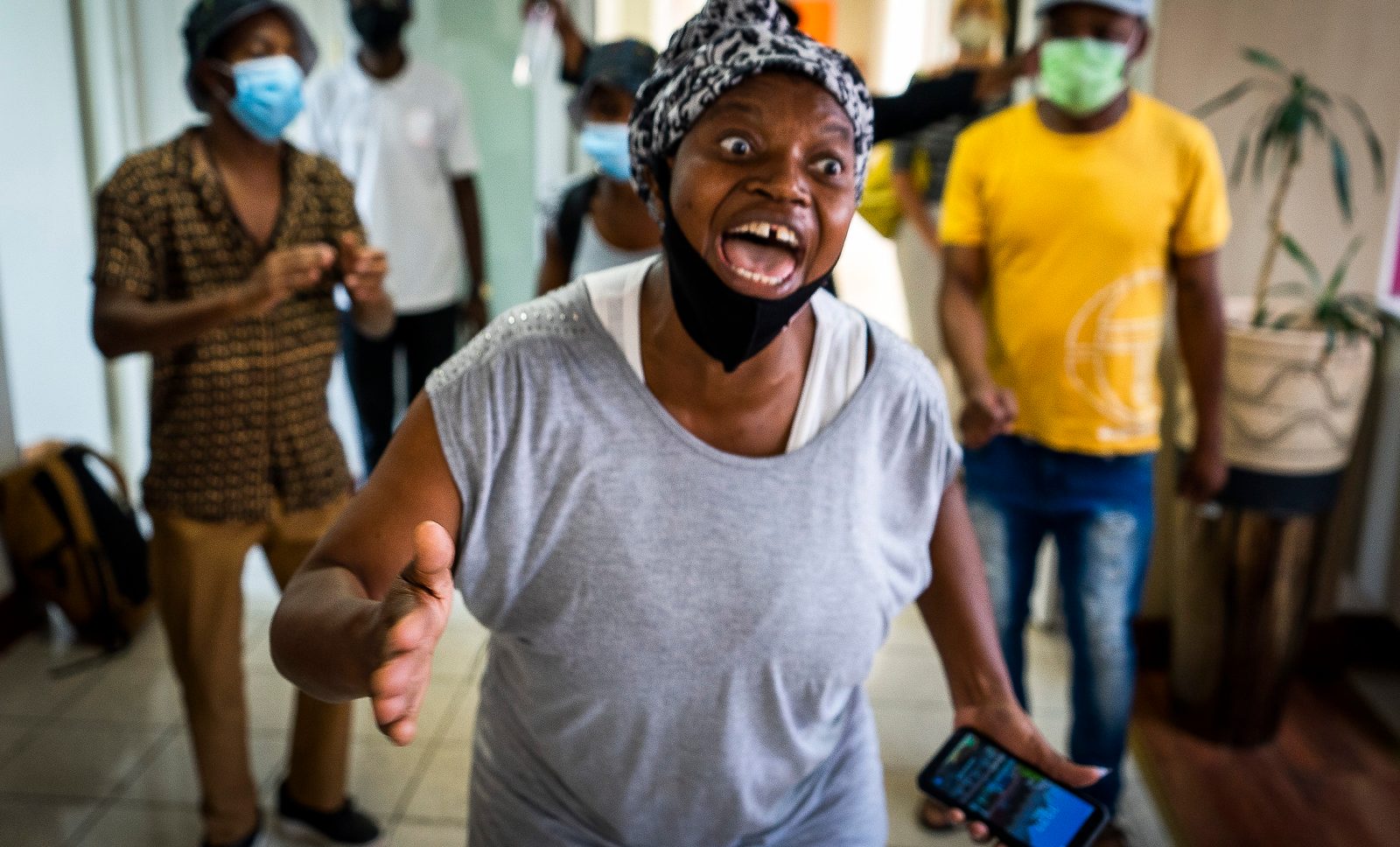 Thoko Hlahla expresses her views on a live social media platform. The NAC has accused the artists of holding them to ransom which has infuriated the artists calling the NAC liars. (Photo: Shiraaz Mohamed)

A group of artists have staged a sit-in at the National Arts Council’s Johannesburg offices since Wednesday, 3 March. They are demanding answers about a lack of payment from the Presidential Employment Stimulus Package. The National Arts Council has met members of the arts sector, but protesting artists are refusing to leave until their demands are addressed.

Two days earlier, on Monday, 1 March, opera star Sibongile Mngoma was among those who had sought answers from the NAC. Mngoma said she was dissatisfied with the answers given. She returned on Wednesday, with actor Thami Mbongo and others.  They then decided to embark on a sit-in.

The artists have been sleeping on the chairs, floor and couches at the council’s offices since Wednesday and have vowed not to move until their demands are addressed. They want to know when the council will pay the money promised to grant recipients. A week before the sit-in, the council had announced that the amount initially promised to recipients would be reduced.

On Friday, March 5 the council said that to date almost R29-million had been disbursed to 264 beneficiaries, including artists and workers from the heritage and cultural sectors. Also on Friday, NAC council member Sipho Sithole said during a Zoom meeting to update artists on disbursements, “whilst we were hard at work so we can expedite the [stimulus package] process, we were told that a group of artists stormed our offices”.

With the hard lockdown, the arts and culture sector has been ravaged by event cancellations. A South African Cultural Observatory study published in November 2020 found that 90% of the live music industry had lost income due to Covid-19 and 25% of artists indicated that they would not be able to continue with any elements of their business under lockdown.

The struggling artists drew up a list of demands and questions they wanted the council to answer on the stimulus package. These include when payments will be finalised for those who signed their contracts; when those who were rejected will be notified; a list of those who were paid and how much.

On Friday, other artists came to show support and to deliver parcels of food. They sang and danced in the reception area of the offices.

At an earlier meeting at the end of February, artists had been told that the amounts that had initially been awarded would be reduced. This was because after approving about 600 applicants, the council realised it would not have sufficient funds for the remaining applicants.

Sithole said that to date, 1,215 applications had been finalised and deemed compliant and that they were “working tirelessly” to finalise the 159 remaining applications. He said that the council would publish a full list of beneficiaries and projects that had been awarded funding on its website, as well as how much they were awarded.

The council drew criticism for its decision to reduce the grant money.

During a question time, Thandile Petshwa, deputy president of the South African United Cultural and Creative Industries Federation, said, “Council decided to build new houses by breaking down other houses.”

“It’s about negotiating with the other party about the changes. [The council] could’ve gone to those signed contracts and asked what can you do without… You don’t just unilaterally decide to reduce [the] amount. It shows disrespect from one party to another,” said Petshwa.

Another artist, who went by the name Jarryd, said that “the answers [given] aren’t directly answering what artists are asking. How did [the stimulus package] run out of budget and is it legal to change amounts in a signed contract? We’ve [already] agreed to pay our artists based on that original amount,” said Jarryd.

In response to the legality of changing the contracts, arts council member Makhosini Nkosi said that once the council realised that there wouldn’t be enough money to go around, it had two options:

The council took the second option.

“Some will say ‘we accept this’, others will say ‘no ways, we’re holding you to the initial contract’. Which means we’re facing the prospect of litigation,” said Nkosi.

The council was also not willing to spend money fighting in court, said Nkosi, acknowledging that its decision “may not be the perfect solution” but “once we start litigating, we become adversaries and that spoils the relationship”.

Addressing an audience on a Facebook live video after the meeting, Mngoma said: “I am actually quite shocked that the council came out today to address the industry as a bunch of liars. Their advocate [Nkosi] arrogantly misled the sector. These are the people we are supposed to entrust with our lives and the lives of our children and the livelihood of an entire sector.”

Another artist who was at the sit-in, Beverley Andrews, told Daily Maverick that she was frustrated “because we basically did our projects and our budgets and told the artists that we are creating the jobs and that this is the amount we will be getting and it’s being cut.”

Andrews said that she’d signed her contract in January and had still not been paid. “According to their contract, I was supposed to receive the funds after 48 hours. It’s almost two months and nothing.”

The South African Cultural Observatory study found that musicians were so desperate for money they’d resorted to selling their equipment.

“That [council] is lying, what are we supposed to do when we are hungry? We are hungry. Pay us. There is nothing to say because I am so fed-up there is nothing [else] to say. We have played around the world, but we can’t do anything now because our hands are tied. Since lockdown, we can’t do anything. As I am talking to you my landlord kicked me out. I don’t have a place to stay. I have not paid rent for four months. I am staying with my sister-in-law because of [the council].”

The arts council said that it was working around the clock to pay grant recipients. Those who had signed and sent back their new contracts should expect to be paid within 72 hours, said Sithole.

Nathi Mthethwa, the Minister of Arts and Culture, has been silent on the situation and his spokesperson did not respond to queries.

Last month, artists drew up a petition calling for Mthethwa’s removal after he tweeted: “Theatre is alive and well.” The minister later apologised for the tweet.

Artists maintain that he is out of touch with the realities of the theatre industry. DM