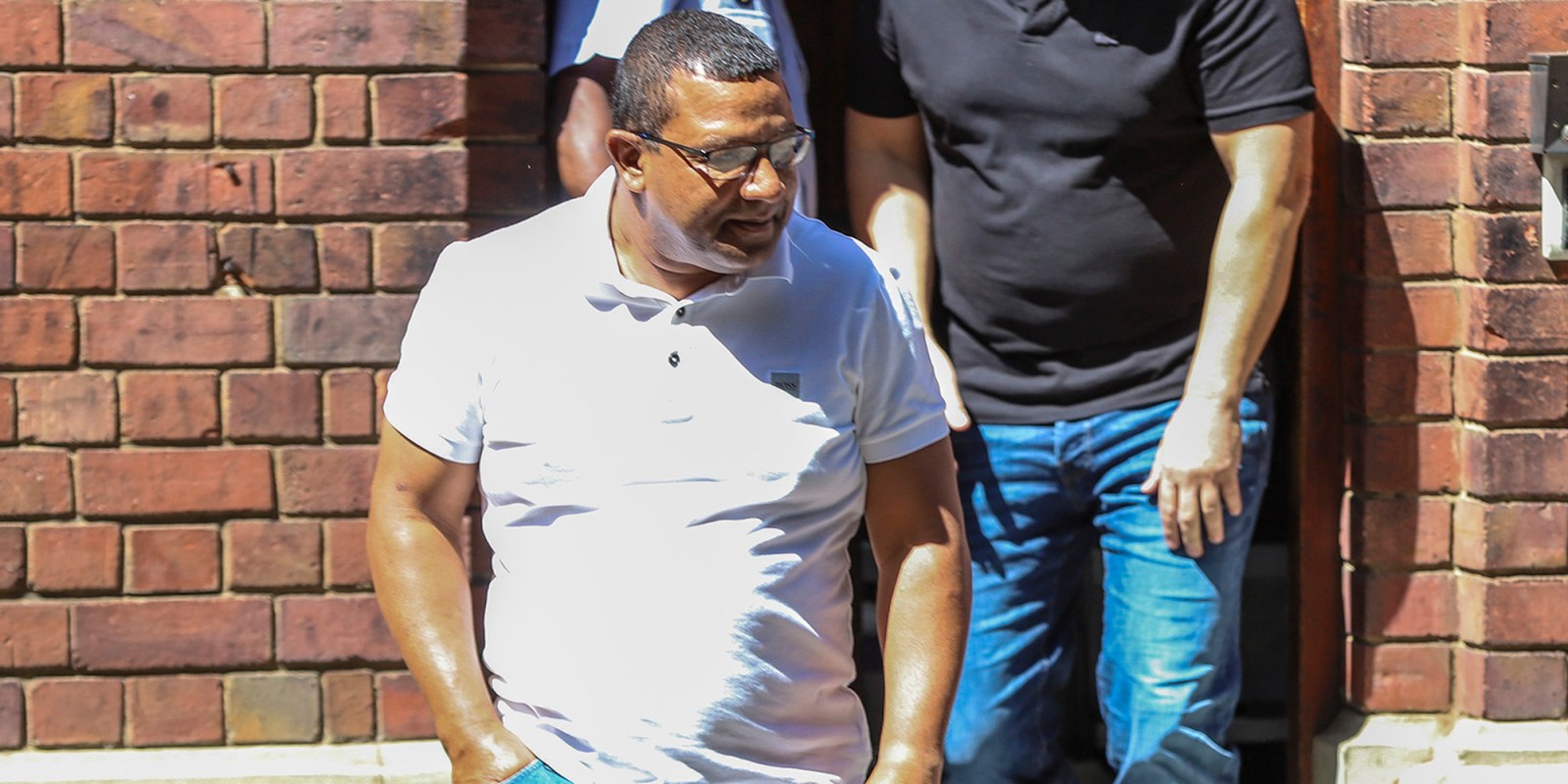 Two developing and overlapping organised crime court cases in Cape Town reveal just how far-reaching underworld activities in the city are. The cases also show that investigators are going after all tiers of suspected criminality — from alleged foot soldiers to those seen as middlemen and masters.

An ex-Springbok rugby player. The notorious 27s gang. The assassination of an international steroid dealer.

The three may seem totally unrelated, but court cases taking shape and set to play out in Cape Town are exposing suspected links between them and just how far the reach of organised crime — as the State alleges — stretches.

In the latest developing case, Jerome “Donkie” Booysen was arrested on Thursday, 18 February, along with five other men.

One of the five is Clinton Langeveldt, a former City of Cape Town law enforcement officer who reportedly resigned after he was arrested in November 2017. At the time of his arrest in the suburb of Bellville South, he was allegedly found in possession of R2-million worth of Mandrax.

Bellville South is widely known as Sexy Boys gang turf and several years ago Booysen, in an unrelated court case, was pointed to as being a leader of this gang. He was not arrested for this.

Booysen and the five men arrested with him this week face 96 drug dealing charges, and the indictment against them shows they are accused of crimes relating to the Mandrax trade, covering a period from February 2013 to November 2017.

They allegedly dealt in tens of thousands of Mandrax tablets.

Hawks spokesperson Colonel Katlego Mogale said it was believed the six suspects were “the primary distributors of illegal drugs in the province”.

This case marks the second time Booysen, a former rugby player deeply involved in a rugby club in the Cape Town suburb of Belhar, has been arrested in less than two months.

In the previous case, he was arrested in December 2020. He is accused alongside 15 suspects (a 16th has since been murdered), including controversial Cape Town figures Mark Lifman and Andre Naude, of a range of crimes.

One of the main crimes falling under this massive case is the 18 August 2017 murder of international steroid smuggler Brian Wainstein, who was killed in his home in the Cape Town suburb of Constantia.

In both the Mandrax and Weinstein cases, Booysen is facing charges under the Prevention of Organised Crime Act, which has aims that include combating “organised crime, money laundering and criminal gang activities”.

It also allows the State to recover money made from crime and governs the Asset Forfeiture Unit’s operations.

Lifman, Booysen and Naude, who are central to the case involving Wainstein’s murder, have had previous brushes with the law.

Their names have been linked to nightclub security operations in Cape Town — they became involved in this arena after the March 2011 murder of rumoured ANC-aligned state operative and underworld kingpin Cyril Beeka.

Lifman and Naude previously faced charges relating to running a private security company without being registered with the authority regulating this area, in a case stemming from 2012. They were acquitted and had countered that the State had targeted them for ulterior reasons.

In another 2012 court case, a Hawks investigator named Booysen as a suspect in Beeka’s murder, but he was not arrested and nothing further seems to have come of the claim.

In the most recent case involving Lifman, Booysen and Naude, one of the 16 men arrested was William “Red” Stevens, widely known as one of the Western Cape’s most seasoned 27s gangsters. He was murdered on 2 February. Another accused is a police officer.

A section of the provisional charge sheet hints at just how broadly their alleged operations extended, with 11 Cape Town suburbs, stretching from gang hotspots to upmarket neighbourhoods, listed.

It says: “The accused between April 2017 and November 2017 at or near Sea Point, Cape Town, Camps Bay, Kraaifontein, Plattekloof, Belhar, Mitchells [Plain], Constantia… Bellville, Blue Downs… and Wynberg actively participated or, as a member of a criminal gang, unlawfully, intentionally and wilfully aided and abetted any criminal activity committed for the benefit of, at the direction of, or in association with a criminal gang, to wit the 27 criminal gang.”

The timeframe mentioned, April to November 2017, roughly coincides with when Nafiz Modack, a younger associate of Beeka, was alleged to have become heavily involved in nightclub security in Cape Town.

A Hawks officer, in a separate court case linked to Modack, previously stated in an affidavit that Modack, with a group of men including Booysen’s brother Colin Booysen, veteran bouncer Jacques Cronje, Ashley Fields and Carl Lakay, started making their presence felt in the nightclub security arena in March 2017, trying to effectively edge out Lifman and his associates.

The so-called Modack group of men, widely viewed as Lifman’s alleged rivals, were arrested on charges relating to extortion in December 2017.

They were subsequently acquitted. The investigating officer in this extortion case was Lieutenant-Colonel Charl Kinnear, who was assassinated on 18 September 2020 outside his Bishop Lavis home in Cape Town.

Meanwhile, in the latest case centred on Lifman, Booysen and Naude, Lifman was alleged to have conspired to have Modack and his associates murdered.

The charge sheet said that in the vicinity of the suburb of Fresnaye, and around 17 November 2017 (this would have been in the run-up to Modack’s arrest on extortion charges the following month), Lifman conspired to have several men killed.

Then, roughly five days later in November 2017, with Naude and Stevens, Lifman allegedly conspired to have the same group murdered, this time possibly at or near Cape Town International Airport.

The charge sheet listed the men to allegedly be targeted as Modack and three of the four men who had been accused of extortion alongside him — Colin Booysen, Fields and Lakay. (Lakay was murdered in August 2018.)

Dalton’s name is not totally incongruent with suspected underworld figures and he has had a few brushes with the law.

He was also among those reportedly present at Beeka’s funeral.

It is understood Dalton may have also been acquainted with Wainstein, on whose murder the big case against Lifman, Booysen, Naude and their co-accused is partially hinged.

Three other suspects have already been convicted in connection with Wainstein’s murder.

One of the three is Matthew Breet. He entered a plea deal with the State in December 2018 and was sentenced to 20 years in jail.

In the fresh case relating to Wainstein’s murder, among the accused alongside Lifman and others is policeman Wayne Henderson.

The National Prosecuting Authority in the Western Cape has said he was initially based at the Anti-Gang Unit and then at the Sea Point police station.

Henderson was accused of conspiring to defeat the administration of justice relating to happenings over a period from about 9 April to 24 August 2017 in Sea Point and other areas of Cape Town.

He had, according to the charge sheet, allegedly assisted Breet “by suggesting an exculpatory version which he was to give up if he was required to make a warning statement to the police on a charge of possession of unlicensed firearm and ammunition”.

Modack has previously claimed police officers — including Kinnear — were on Lifman and Booysen’s payroll and were unfairly targeting him. On the flipside of this is that Modack now faces charges alongside several police officers based in Gauteng in a case focused on allegations that firearm licences were fraudulently created for suspects.

Lifman, Booysen and Naude and their co-accused in the Wainstein murder case are expected back in the Cape Town Magistrates’ Court in May.

Meanwhile, Booysen is expected back in the Bellville Magistrates’ Court with his five other co-accused in the Mandrax-related case in April.

All three are out on bail. DM