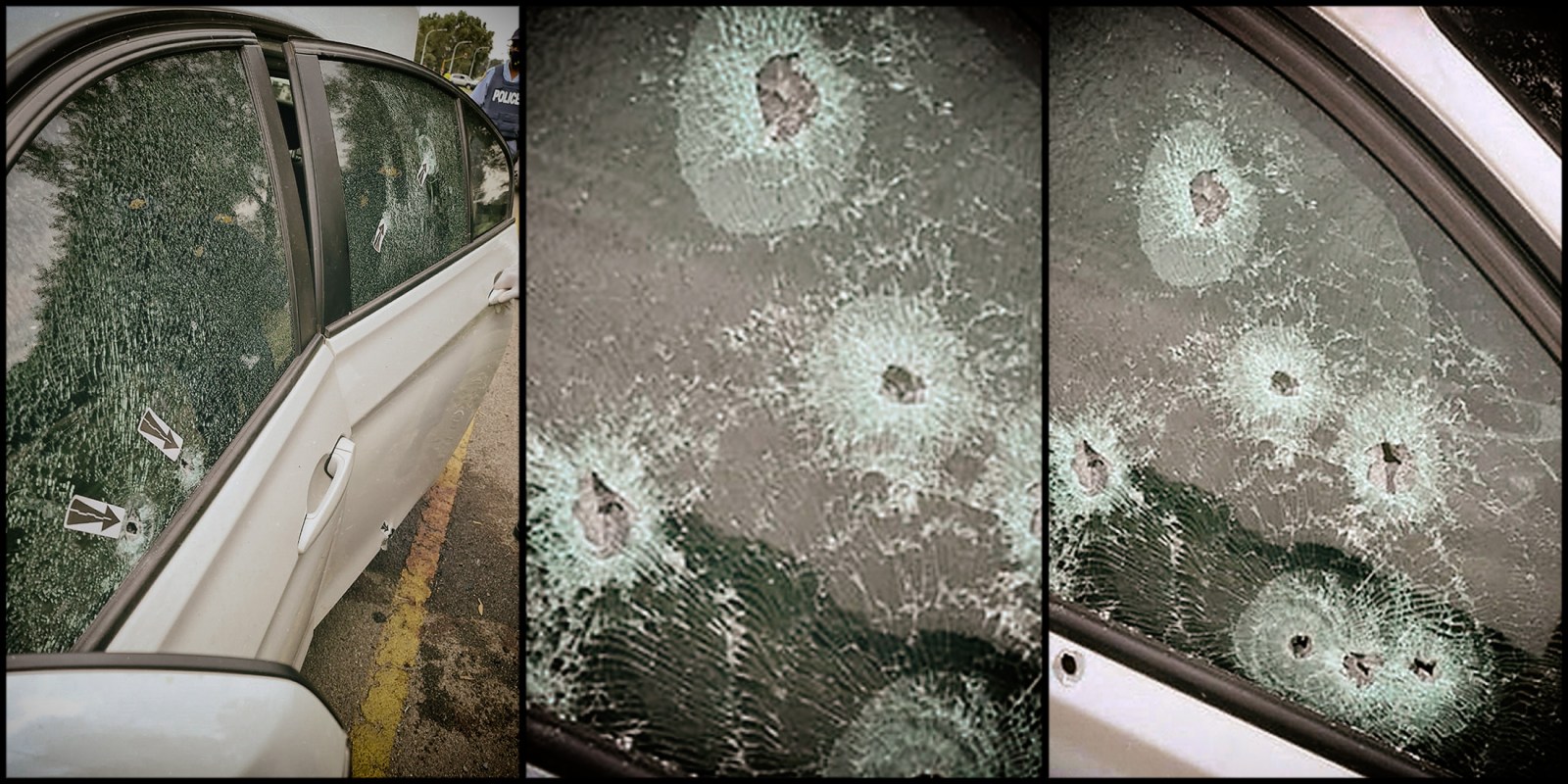 The car of murdered former 28s gang boss Ernest Solomon after gunmen shot and killed him in Boksburg, Gauteng on 20 November 2020. (Photo supplied)

In October 2013 a man was fatally shot in Cape Town. Several sources pointed to him as pulling the trigger on nightclub security boss and underworld kingpin Cyril Beeka two years earlier. The recent assassination of ex-28s gang boss Ernest Solomon means a key to unlocking fuller details about these two murders may have been lost.

At 6.43pm on a Wednesday, seven years ago, Sexy Boys gangster and suspected hitman Leon “Leontjie” Davids was certified dead after being shot five times in the Cape Town suburb of Belhar.

The murder of Davids – the assassination of a suspected assassin – meant that a figure with potential critical inside knowledge of one of the most pivotal murders to have rocked South Africa’s underworld had been wiped out.

This was because several sources had pointed to Davids as being the triggerman who pumped several bullets into underworld figure and state operative Cyril Beeka on 21 March 2011 as Beeka was being driven in the Cape Town suburb of Bellville South, widely known as Sexy Boys turf.

There were suspicions at the time that figures linked to the Sexy Boys wanted to muscle in on the nightclub security scene, which Beeka dominated. Figures with suspected links to the gang did get involved in this arena after Beeka’s killing.

According to sources, Davids and a second man they named, but who has not been charged with Beeka’s murder, had been on a motorbike, with Davids as the gunman and the second man piloting the bike, when they pulled off the hit.

No arrests were officially announced for Beeka’s 2011 murder and the same applied to Davids’ 2013 murder.

Now, these cold cases may gather even more dust because a week ago, on 20 November, former 28s gang boss Ernest “Ernie Lastig” Solomon was fatally shot in Boksburg, Gauteng.

Solomon was pointed to as being the mastermind behind Davids’ murder in retaliation for Beeka’s killing.

The suspected and claimed links connecting these three assassinations – spanning nearly a decade – create a triangle of fatal crimes, two of which have for years been open-ended and the latest still under intense investigation.

Solomon was assassinated last Friday when, according to police, a Ford Ranger intercepted a white BMW. Solomon was one of the occupants of the BMW.

Two men got out of the Ford Ranger and shot at the BMW – Solomon was killed, and three others, including a child, were wounded. One of those wounded, a man, died in hospital on Tuesday, so the case is now considered a double murder.

The shooters fled in another car, abandoning the Ford. Police spokesperson Captain Kay Makhubele said on Thursday arrests were yet to be made.

Sources said the incident appeared to be planned with precision and that an AK-47 assault rifle may have been used in the ambush.

Details about Solomon’s claimed involvement in the killing of Davids are contained in a judgment against his nephew, Horatio “Voudie” Solomon, who was sentenced to life imprisonment in the Western Cape High Court in October.

This case centred on Horatio Solomon, 11 other men facing an array of charges alongside him, and the potent gang he was accused of heading, the Terrible Josters.

Horatio Solomon denied knowing Davids and was not found guilty of murdering him, but claims were also made about his uncle’s involvement during this court case, which also shed some light on the theory of who killed Beeka.

Ernest Solomon was not called as a witness and was not charged as a result of claims made against him in this case, so the claims about him remain open-ended.

According to the judgment against Horatio Solomon and his co-accused, a section 204 witness, a Terrible Josters member identified in the judgment simply as CF, testified that he had known Davids, “a hitman,” as a member of the Sexy Boys gang in Belhar.

CF had alleged that one evening (based on the judgment, this would have been 6 October 2013) an accused in the case, Elton Ely, had called him to an associate’s place, where Ely and others were.

He testified that Ely and another accused had called him aside and “told him that ‘Die Ou’ (Ernest Solomon) had issued an instruction for Davids’ assassination because Davids and one Faizel had shot Cyril Beeka, a well-known figure in Cape Town’s criminal underworld.” (Faizel is not the name of the person who sources said was piloting the motorbike from which Davids shot Beeka.)

Two youngsters had allegedly been sent to check if Davids was home and they had reported back that he was there and braaing in his garage. CF claimed he had then been given a pistol and a revolver and with another accused in the case, had cycled to Davids’ home.

But, he said, when they got there, the garage was closed, so the hit could not be carried out.

According to the judgment, CF alleged that Ely accused him of lying about this and then allegedly told him that Horatio Solomon “would now get the job done properly by paying somebody”.

A few evenings later – presumably on 9 October 2013 – Ely got a call that resulted in him and others going to Horatio Solomon’s house.

“[Horatio] announced that Davids’ ‘nommer gaan gepull word’ (a gangster expression conveying that Davids was to be killed),” it was alleged in the judgment.

Three accused in the case then allegedly left and returned about an hour later and reported to Horatio Solomon that “they had done the deed”, to which he allegedly replied, “our people don’t miss”.

The judgment said Davids was certified dead at 6.43pm.

“The post-mortem report noted various tattoos on Davids’ body. These, particularly the stars tattooed on his shoulders, are consistent with Davids having been a member of a Numbers gang,” it said.

“There were five entry wounds in Davids’ posterior thigh, buttocks and lower back.” A bystander was wounded in this shooting.

Both Horatio and Ely denied involvement in the Davids murder and were acquitted of it.

The judgment, however, said that: “[CF] gave a plausible motive for the [Davids] assassination. There was no challenge to his evidence that Davids was a Sexy Boys hitman and that he was believed to have been responsible for Cyril Beeka’s death.”

Other intriguing claims relating to Solomon were recorded in the judgment, one being that CF alleged that drugs were being obtained from Ernest Solomon.

The judgment also included details about how CF believed the Terrible Josters gang got its name: “The ‘Josters’, on his understanding, came from Johannesburg in the 1990s.

“The name ‘Terrible’ was added because the ultimate leader of the gang was… Ernest Solomon… whose nickname was ‘Lastig’.” The word “Lastig” can be translated as “terrible”.

In March 2020, while apparently out on bail, Horatio Solomon was wounded and his 13-year-old daughter killed in a shooting.

Roughly two months later, in May, Ernest Solomon and a son were wounded in a shooting in Hawston.

It was believed the shootings were a result of friction within the Terrible Josters gang. DM