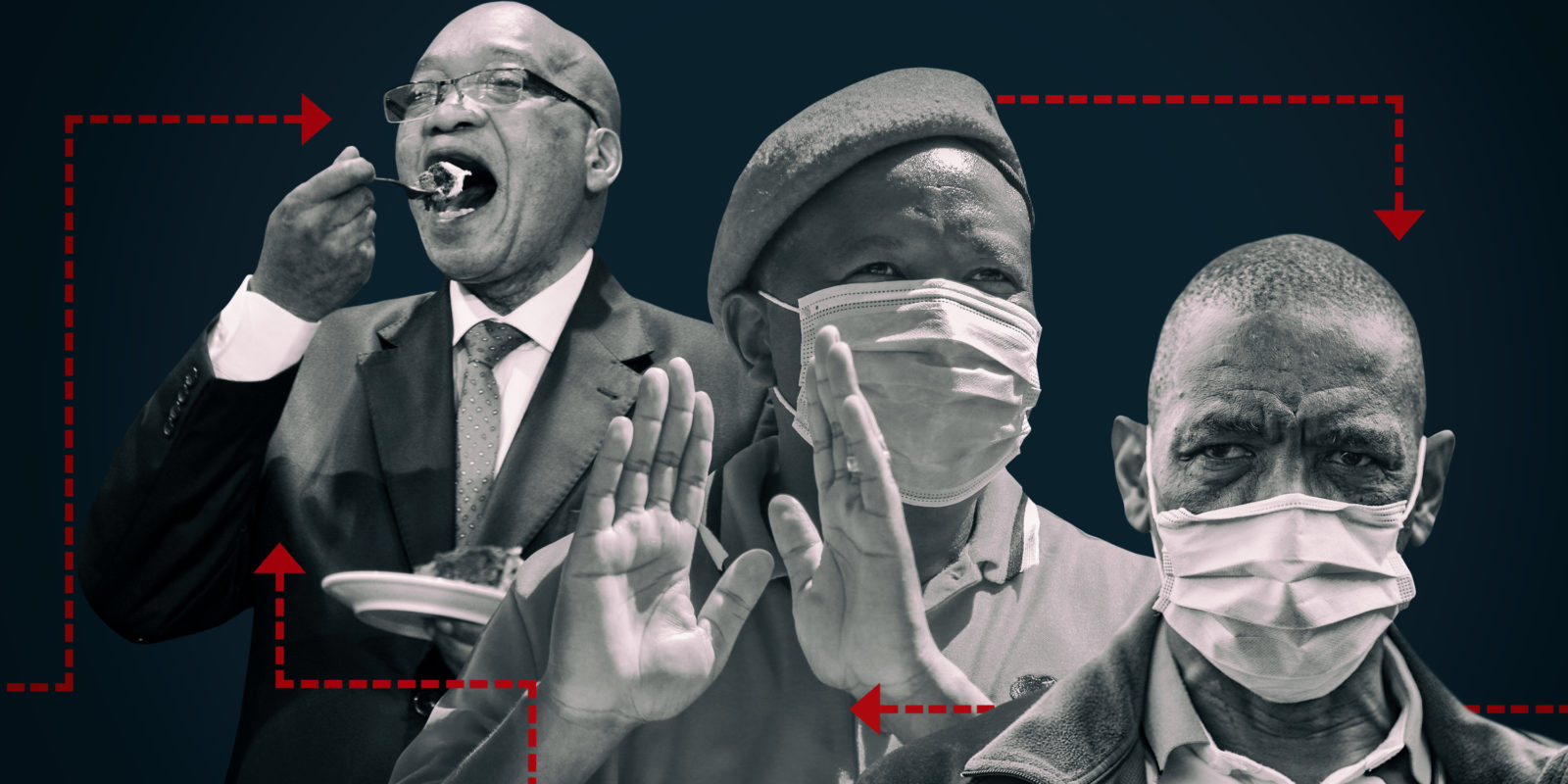 The racial capitalism of apartheid has been turned on its head by the largest beneficiaries of post-apartheid South Africa: The ‘black bourgeoisie’, in former president Thabo Mbeki’s words. They are the upwardly mobile South Africans who, in the name of transformation, have moved into all the privileged positions of a standard class-structured capitalist economy.

A six-year-old family member developed the “why did the chicken cross the road” into his own riddle: “How does a cow do maths? By using a cowculator.”

Inspired by him, how would we answer this particular riddle: what connection is there between Jacob Zuma’s recent announcement of his defiance of the Constitutional Court, the ANC secretary-general’s defence of the former president of South Africa, Julius Malema having tea with Zuma, the Progressive Business Forum requiring the vaccine rollout to be a business opportunity for black business and… what the current Employment Equity Amendment Bill (EEAB) intends leaving unamended?

Before getting to connections with the EEAB, let’s first look at the connections that have been made regarding Zuma, Malema, Ace Magashule and the tea party.

The media has been buzzing with commentaries and analyses of these events – many with interesting things to say. But all are silent about at least one major connection between them. And none offer any connection with what the Employment Equity Amendment Bill intends not amending.

Takeaways of what has been said about each of these events and their connections include:

Many commented on Zuma’s view of himself as the victim – the sacrificial lamb. Some draw attention to his megalomania; to his view of himself as a latter-day Robert Sobukwe, who posed such a challenge to the status quo that punitive steps had to be taken specifically for both of them.

He has uniformly been presented as an opportunistic King of Spectacle. Like Zuma, he faces serious allegations of corruption and, like Zuma, has sought to discredit the Zondo Commission, which is reportedly investigating him and his alleged role in the looting of the VBS Bank (see here and here).

Dubbed “The Great Nkandla Tea Party”, it has undoubtedly been “one of the biggest talking points around”, with Twitter in overdrive (see here, here and here). Described as “the Devil’s Pact” that “gathered the desperate and dodgy” and called “a coalition of the wounded and criminally charged”, it has also been depicted as part of the fightback strategy against Ramaphosa (see here, here and here).

And, then, there’s the incomparable Zapiro’s take:

One lump or two? 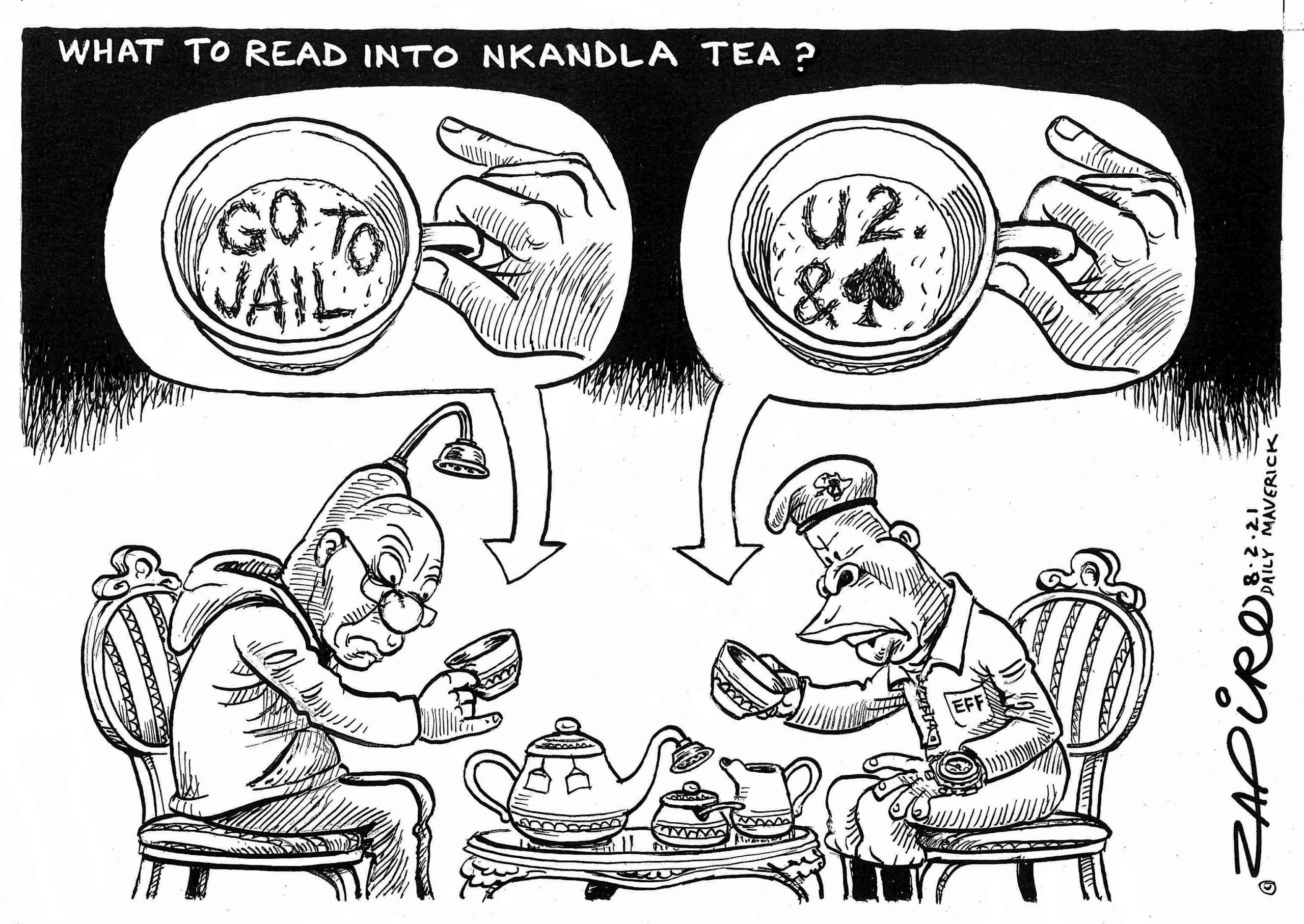 Magashule… and the first missing connection

The common thread in unstitching Magashule’s behaviour has been to see it as part of the broader “coalition of the wounded gathered around Zuma”.

A legal perspective finds “Ace Magashule’s view of the legal world is at war with the vision of the Constitution”. The concentration, here, is on Magashule’s actual words rather than on what lies behind them.

Magashule’s words do imperil the Constitution. But thanks to a dogged TV interviewer who pressed Magashule to explain his allusions to dark forces, we now have a better understanding of his forebodings. Typical of these allusions, which he made during the many occasions he was asked to explain his comments about the Constitution, is this one:

“We will one day talk about what is happening in South Africa. There are many wrong things which are happening in this country today.”

The TV presenter persisted in getting Magashule to explain now, rather than “one day”, what, in his view, is immediately so troublesome. He finally relented: “Black business people are being silenced and their businesses shut down.” (NewzAfrica 4 February 2021).

One of Ndlozi’s tweets foregrounded what for him is the major issue of the “white privilege driven economic structure of South Africa”. There were other allusions to the “white problem” during the events we are covering, but they are also not developed.

Malema, for instance, responded to a tweet by Derek Hanekom, the former Cabinet minister, on his then-imminent visit to Zuma with a tweet of his own. He dismissed Hanekom’s tweet with the racist retort that his meeting with Zuma would be “a meeting of black people, if you don’t mind”.

It is Zuma, however, who provides the clearest insight into what brought everyone to the Great Nkandla Tea Party. He does this in the same closely analysed letter he sent to the Zondo Commission. Zuma remains the victim, but he explains what lies behind his persecution:

“I… am the target of propaganda, vilification and falsified claims against me for my stance on the transformation of this country and its economy.”

“My stance on the transformation of this country and its economy.” This is Radical Economic Transformation (RET) talk. And RET is a Zuma-faction version of turning racial capitalism on its head. This, too, is where the ANC-aligned Progressive Business Forum begins to join with all the other dots.

During this period (1867-1994) “race” was used to dehumanise the “non-white”, mainly African workers, and, thereby, legitimise their ruthless capitalist exploitation. This initially profit-maximising motivation came, over time, to shape the entirety of South Africa: its economy, society, psychology and politics.

White privilege was not only the cardinal fact of life but was a reality sanctified by the Constitution, law and religion and vigorously enforced by the state through the courts, police and army.

They are the upwardly mobile South Africans who have moved into all the privileged positions of a standard class-structured capitalist economy. A move made possible by, on the one hand, the removal of the former apartheid race barriers and, on the other hand, a government committed to BEE and race-based affirmative action. And both in the name of transformation.

This transformation is in direct conflict with substantive sections of the Employment Equity Act (EEA) of 1998, which is now being amended. And that conflict is unequivocal.

Connecting the final dot: the problem of the EEA

Daily Maverick has published several of my articles on this subject. The most immediately relevant one, of September 2019, is titled: “The ANC government conveniently ignores the law when it comes to race classification and equity.” Again, in summary and for present purposes, there are three problem sections of the EEA (see here for the Act). All of them were subject to vigorous debate before being adopted by Parliament. All of them have been summarily ignored by all state organs.

None of the apartheid categories – African, coloured, Indian – which are obligatory in all current South African statistics, are to be found in the act (other than to be explicitly excluded). Thus Section 1 of the act states: “‘black people’ is a generic term that means “Africans, Coloureds and Indians”.

There are similarly no separate African, coloured, Indian or white women categories in the EEA. S1.5 defines only generic “women”.

S27 of the Act has been so effectively ignored that few people even know of its existence. Its principal requirements merit repeating:

It bears repeating. All these provisions have been ignored.

This extra-parliamentary action speaks to their inconvenience. (Forms have been produced supposedly in pursuance of S27.1. However, even in their most recent iteration, they undermine S27 of the act.)

The generic definition of “black people” no longer represents political reality. Little attempt is made these days to disguise the fact that when most people refer to black South Africans, they mean Africans. When any confusion may arise, the term “black Africans” is used. How and why did this happen?

Africans are by far the largest apartheid category in (post-apartheid!) South Africa. Many among them claim, as the main victims of colonialism and apartheid, to be the group mainly entitled to redress.

The ANC, which in 1997 successfully prevented the pressure from within Parliament (and its own ranks) to racialise the EEA and to do so using the divisive inventions of apartheid, has gone.

Replacing that ANC is the ANC committed to what president Thabo Mbeki, in 1999, called the creation of a “black bourgeoisie”. Using race to promote the class interests of a mainly African elite necessitates the perpetuation of the concept of racial injustice.

Exclusively white privilege, along with claims of white supremacy and white monopoly capital, are essential aspects of the need for a racialised Other in this inversion of racial capitalism. Race remains as much involved as capitalism in this new form. But the racialised victims have now become the racialised beneficiaries.

Thanks to the Employment Equity Commission and its annual reports, we know that 83.7% of the unskilled are Africans. We know also that Africans form 78.8% of the economically active population. This population demographic alone ensures that Africans will predominate among the lowest occupational levels.

In one of the most unequal countries in the world, this means that the mere size of the African population will normally always permit the “black bourgeoisie” to point to the injustice of black people still living in poverty in an untransformed South Africa.

What could be more convenient than the annual reports of the Employment Equity Commission, with their seemingly statistical “proof” of the prevailing failure of “transformation”?

Capitalism is inconsistent with capping the upper reaches of the rich. The bourgeoisie in all countries exemplify this reality. This is why global inequality is not only sustained but, depending on where one stands, gets increasingly worse – or better.

There is no reason why South Africa’s black bourgeoisie should be any different from their class colleagues everywhere else in the world. And they are not different. They are the direct and immediate beneficiaries of South Africa’s notorious and ever-increasing inequality.

S27 is an impediment to their wealth (which is why it was vigorously opposed but eventually forced through by a determined Cosatu). The successful ignoring of S27 reflects a new alignment of class forces. Their non-African colleagues among the rich ensure their collaboration in this flagrant flouting of the act.

The Alternative Information & Development Centre (AIDC), where I work, will shortly be making a submission on the Employment Equity Amendment Bill. The bill does actually amend S1 of the act. BUT: not the definition of either black or women. And it remains entirely silent about S27. The AIDC’s submission will query these omissions and silences.

I return to my six-year-old family member with whom I began this article. I’m looking ahead to when he becomes not much older. My hope is that the injustices perpetuated by the flouting of the law, that have been the substance of this paper – beginning with Zuma and ending with the Amendment Bill – will be part of the history he will be learning in Covid-19-free schools delivering free, quality education for all. DM