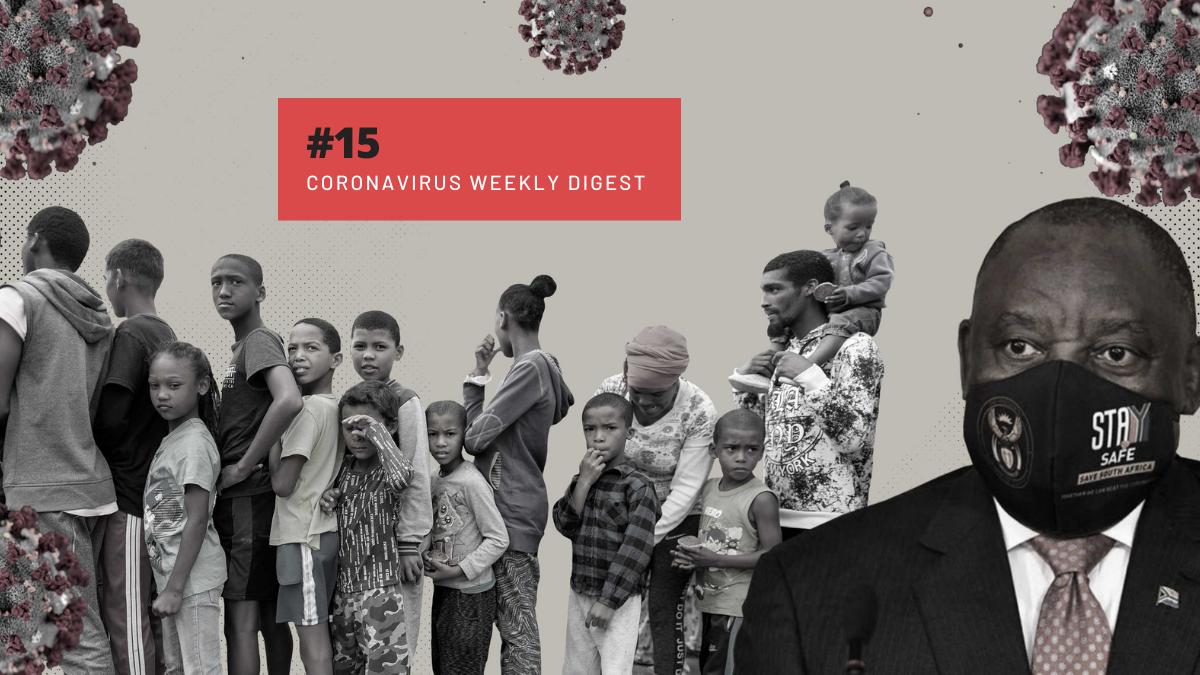 This week South Africa saw a record number of excess deaths as the reopening of schools was delayed, while the Eastern Cape scrambles for oxygen, alarm grows in Gauteng over unfinished field hospitals and inadequate burial space and KwaZulu-Natal's corruption probe is expanded.

Maverick Citizen publishes a Coronavirus Weekly Digest each Friday. It summarises highlights from the previous week’s news about the Covid-19 pandemic in South Africa.

Record number of excess deaths in first week of 2021

More than 20,000 South Africans died between 30 December 2020 and 5 January 2021, according to the Burden of Disease Research Unit at the South African Medical Research Council. A record 10,907 were excess deaths from natural causes – the vast majority of which are likely attributed to Covid-19, says the council. Unnatural causes – such as accidents and murders – fell below the prediction. As James Stent and Nathan Geffen write:

“By comparison, in the worst years of the Aids epidemic (in the 2000s), there were at most about 6,000 excess deaths due to the disease each week. But this went on year after year, while the current Covid-19 surge will subside in the short-term.”

KwaZulu-Natal has the highest number of excess deaths for this period, followed by the Eastern Cape. The Western Cape and Gauteng had a rapid increase over this time.

On Monday, President Cyril Ramaphosa announced that Level 3 would be extended until 15 February. In addition, the country’s land border posts have been closed except for a handful of exceptions. This was owing to congestion.

He reiterated that “the pandemic in our country is now at its most devastating”, with record numbers of new infections, hospital admissions and deaths.

Public and private schools will reopen on 15 February – not 27 January as planned – because of the increase in new Covid-19 infections, said Deputy Basic Education Minister Dr Reginah Mhaule on Friday.

According to Mhaule, “all stakeholders” were in agreement about the delay. These ranged from the Council of Education Ministers to teacher associations. As Victoria O’Regan writes, trade unions have voiced concern that the department is not ready to reopen schools.

Gauteng battles as the second wave bears down

On Tuesday it became clearer that Gauteng is once again on the verge of being overwhelmed by Covid-19. Premier David Makhura said the province’s peak is expected to be “65% higher than the first wave”. There has been a rapid increase in infections and deaths – in the week prior, 4,128 people were in hospital for Covid-19 and 433 died. There were more than 50,000 active cases.

The province expects to create an additional 775 beds in January and February. Makhura said “we have better capacity to face the second wave than the first”.

However, as reported by Mark Heywood, the four new ICU field hospitals remain incomplete, with no staffing resources. They were meant to provide 1,400 additional beds. The construction of one hospital has “ground to a halt” due to legal action over the contract.

Read more: Gauteng doctors on second wave: ‘Our health system is overwhelmed – we are traumatised for life’

As Bheki C Simelane reports, the lack of mortuary capacity, coffins and burial space is causing alarm in Gauteng. Across the country mortuaries are under “extreme pressure”, says Pheko Methula of the National Funeral Practitioners Association. There is inadequate storage and funeral parlour staff are working much longer hours. There is also a shortage of burial and mortuary staff. Vehicles are in short supply, as are coffins.  Simelane reports that while there is some burial space available, some facilities are expected to reach capacity in months with no alternative land available.

Due to “unprecedented demand”, medical oxygen manufacturer Afrox has recalled oxygen cylinders from industrial clients to convert them for medical purposes. It is the sole supplier of medical oxygen in the province.

The company has alerted the Eastern Cape Health Department that it has released the department from part of its contract barring it from finding supplies elsewhere because its oxygen supply is under such strain. However, other suppliers are “also stretched”, says acting department head Dr Sibongile Zungu. Other contingency plans have been put in place, but with little success. As Estelle Ellis writes, Zungu said the province may ask the South African Defence Force to help collect and transport oxygen if the department cannot manage.

Meanwhile, the province’s health MEC, Sindiswa Gomba, is on sick leave recovering from Covid-19, having tested positive on 13 December. MEC for Cooperative Governance and Traditional Affairs Xolile Nqatha will act in her place.

As Estelle Ellis reports, the province has failed to publish a public update on Covid-19 infections and deaths since 3 January. Health Minister Zweli Mkhize had ordered that numbers be reported daily.

The province says the peak of the second wave was between 10 and 16 December and lasted longer than the first. Nels0n Mandela Bay and Sarah Baartman District are seeing a decline in numbers, while infections are on the rise in Joe Gqabi District and Aliwal North.

The Western Cape’s new Covid-19 infection numbers are stabilising, indicating the province is entering the peak of the second wave. Hospitals are still under “severe pressure” and healthcare workers face “significant physical and emotional strain”, said the provincial health department head Dr Keith Cloete on Tuesday. There are 1,029 healthcare workers with Covid-19 in the province, mainly in the Cape Metro and Winelands. As Suné Payne writes, the province said it needs to provide relief for these workers and their families.

The province has turned its attention to the vaccine rollout. Cloete said 100,000 healthcare workers will be first to receive it if they choose to.

Read more: Should the Covid-19 vaccine be mandatory? We asked the experts

Meanwhile, hundreds of residents were forced to sleep overnight and queue outside the offices of SASSA and the Labour Department. Reporters spoke to those waiting in the overcrowded lines about their Covid-19 fears and frustrations with maladministration. Read more here and here.

The Special Investigating Unit is now investigating 226 contracts after it expanded the scope of its probe into Covid-19 corruption in KwaZulu-Natal. The total value is now R606,435,294. They include contracts of several municipalities as well as the office of the premier. A progress report was presented to President Cyril Ramaphosa in December 2020 and another is expected in February 2020. Des Erasmus unpacks what happens next.

On Thursday, EFF leader Julius Malema said he would willingly be one of the first to take a Covid-19 vaccine. He lamented the “unscientific” and “illogical” theories about Covid-19 vaccines in South Africa and urged supporters to stick to Covid-19 regulations. He paid tribute to those who lost their lives to Covid-19 and called off all party activity until the end of the second wave. He reiterated the party’s call that local government elections should be postponed to 2024 because of the pandemic. Rebecca Davis reports.

A new research initiative has been launched by Columbia University’s Institute for Social and Economic Research and Policy to identify some of Africa’s best Covid-19 solutions and spread them continent-wide.

The working group will be led by Dr Wilmot James, a senior research scholar and interim chair of the Center for Pandemic Research at the Institute for Social and Economic Research and Policy. He served as a member of Parliament in South Africa between 2009 and 2017.

The initiative was launched after the publication of a study of the government response to Covid-19 in South Africa, Nigeria, Ethiopia, Egypt and Kenya. It found that the countries’ quick and innovative responses meant they could ward off an initial rapid spread of the virus despite being unprepared for such a health emergency. However, they will have to readjust their strategies to take into account the economic fallout and damage to their health systems.

The working group – the African Pandemic Response Innovation Working Group – will see Colombia University partnering with African institutions to conduct the research and come up with new innovations to improve, for instance, data surveillance. Read an interview with James about the initiative’s mission here. DM/MC

Elri Voigt for Spotlight • 14 hours ago