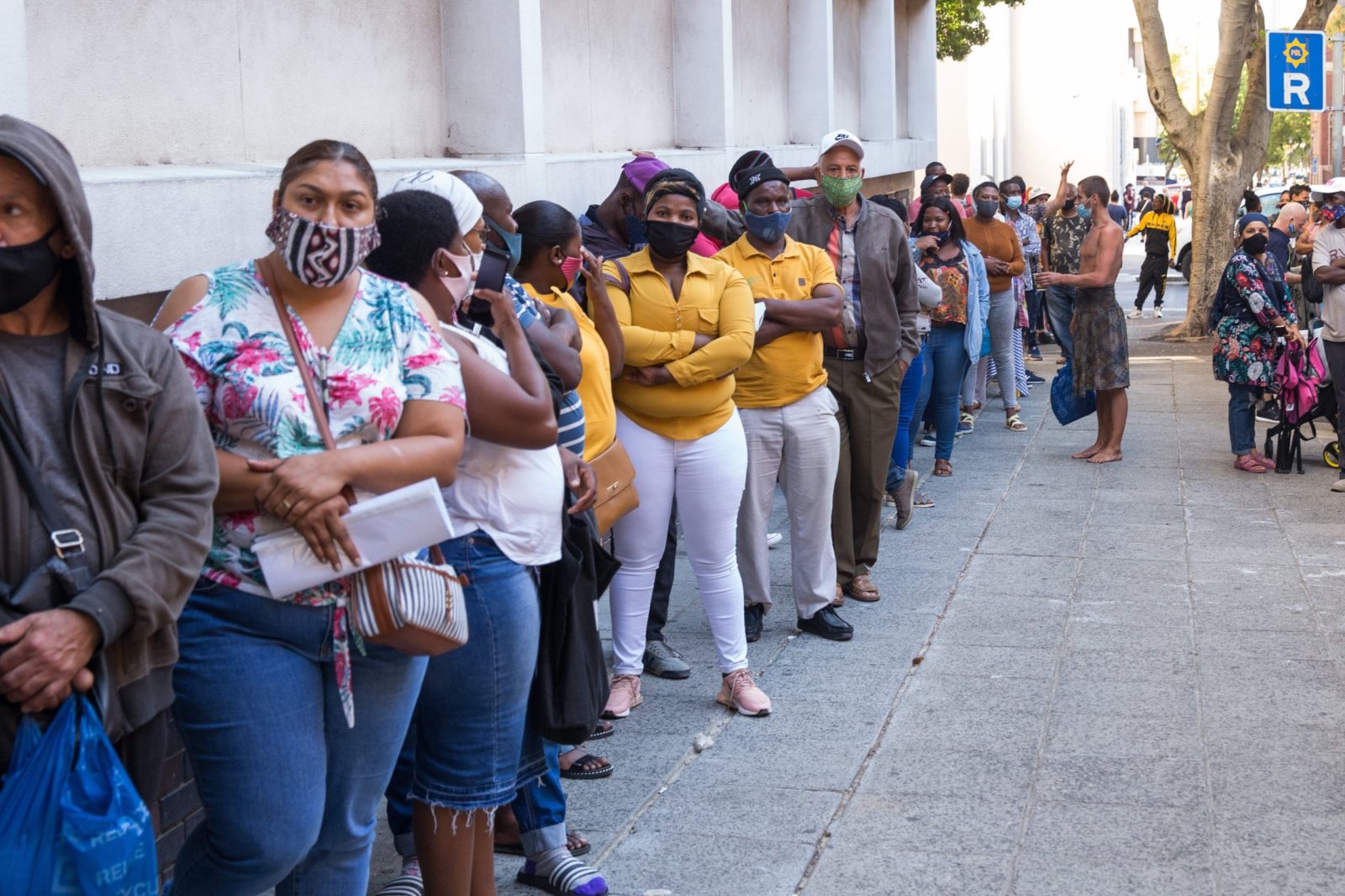 Hundreds of people queue to enter the Department of Labour in Cape Town on the morning of Thursday, 14 January 2021. (Photo: Ashraf Hendricks)

Isaac Martinus was retrenched as a manager in May because the company he worked for was struggling due to Covid-19.

He has been applying for Unemployment Insurance Fund (UIF) support since June via the Department of Labour’s online portal. When enquiring about his application, he was either told to wait or was ignored.

Desperate and out of options, he visited the office in person with his wife Petula with the little the money they had left. They took an Uber from Grassy Park, costing them R95, to the department in the city centre, just before curfew around 8pm last night.

With only two chairs, warm clothes and each other for company, they spent the night outside the offices. Twelve hours later, at 8:20am, Martinus along with dozens of other people waiting outside were allowed to enter the building. There were about 350 people outside the labour department offices on Thursday morning.

“I didn’t get sleep,” said Martinus, whose eyes were red and puffy. He said that there were people moving around the entire evening making him feel unsafe.

He said that people started arriving to queue from 3am. Martinus said that he desperately needs UIF money. “I have two children. My rent is R5,000,” he said. If he can’t get his money on Thursday, he is not sure what to do next.

At 7:30am, the line into the labour office snaked around the entire building. Everyone was wearing masks, but there was no indication of physical distancing. Similar queues were also seen at the Home Affairs office nearby and at SASSA offices across the city.

“It’s so disgusting, waiting so long for your own money,” said Petula, Martinus’s wife. At 5:30am she said that she sold her spot in line to another woman for R50. This helped them buy something to eat.

Petula said she works two weeks every month at a daycare facility. She only gets half her usual salary. “My husband is not working. He is not earning anything,” she said.

Marthinus and Petula were assisted and left the city at 10:30am.

Natalie Paulse from Strandfontein Village works two weeks a month. She arrived before 6am to apply for compensation. She said that her company submitted applications online in October and were told that they need to apply in person. She was told that the e-filing system for UIF is not working.

“That doesn’t make sense. We’re in a pandemic,” she said. “Standing in line is dangerous … you are subject to being robbed, attacked, and if you are driving with your own car, you need petrol.”

Paulse said that she has already attempted to apply for UIF at offices in Atlantis, Somerset West and Athlone. Whenever she arrived at 6am, there would already be 100 people in front of her, she said.

“I’m the only one working in a house of five people,” she said. Paulse said she is lucky as the people in her community have been helping one another. “South Africa is pulling together as a country, but not the government. They are failing us miserably.”

Musa Zondi, spokesperson for the national Department of Labour said that officials were in talks on how to resolve the issue of crowds at their offices. “We do not want our centres to become super-spreaders,” he said.

Zondi said that different provinces are developing specific plans and referred additional questions to the Western Cape spokesperson who had not yet responded by the time of publication. DM