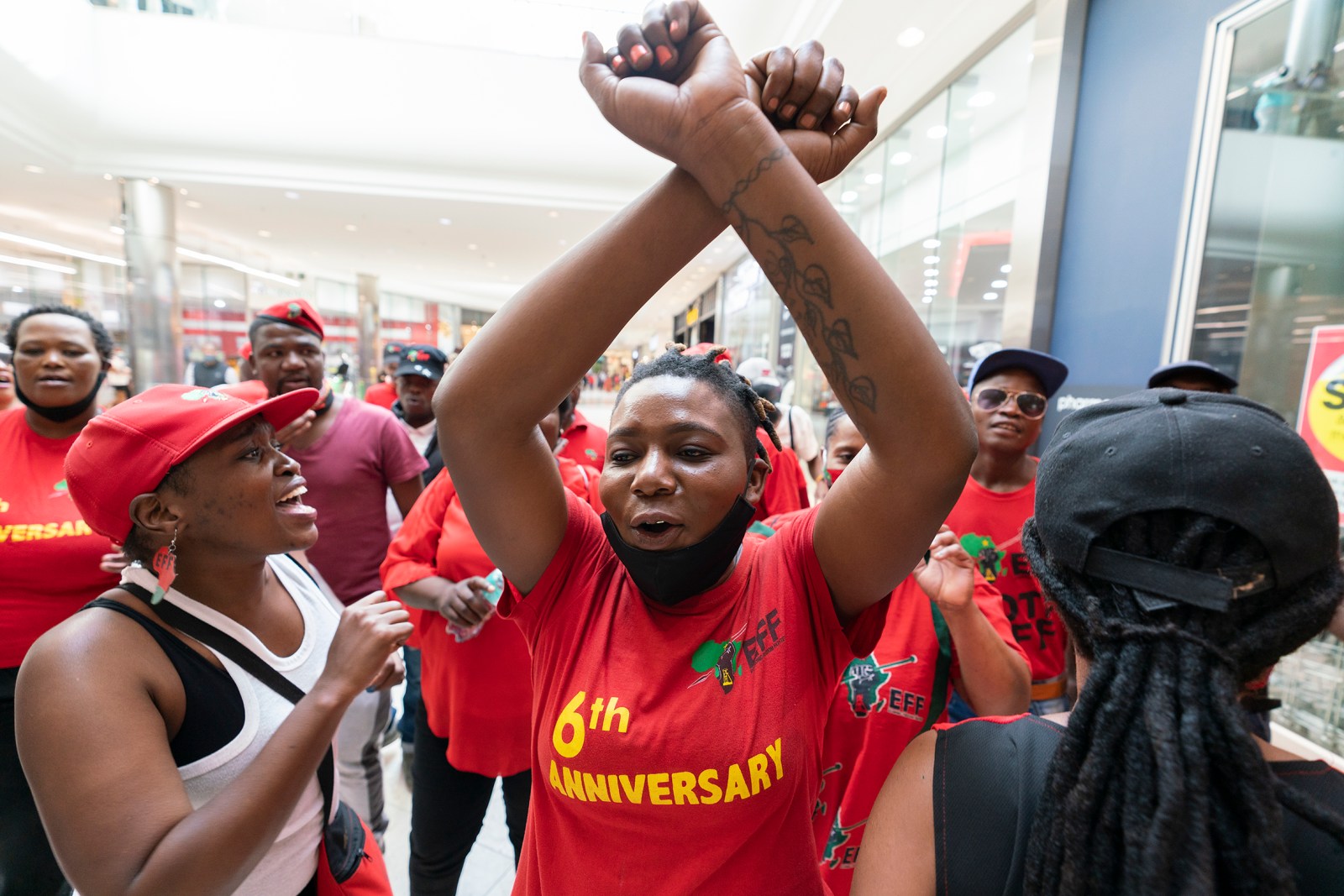 An EFF Member holds up her hands in protest outside a shut Clicks store in Mall Of Africa, Midrand, Johannesburg. The protest entered into its second day. (Photo: Shiraaz Mohamed)

The pharmacy, health and beauty products retailer says it will use the opportunity presented by the closure to provide its staff across the country with counselling and support.

On Tuesday, and on the back of a court interdict preventing the EFF from intimidating and threatening its employees, intimidating and threatening its customers, and inciting violence against Clicks operations, the retailer said all its stores would be closed on Wednesday 9 September. This followed pressure from the EFF, which had called for all Clicks stores to close until Friday.

“Yes, we will be closed, but we are closing only for tomorrow [Wednesday],” spokesperson Susann Caminada confirmed on behalf of Clicks.

The pressure to close its stores follows Clicks posting a hair product advert on its website depicting black women’s hair as “dry and damaged” and “frizzy and dull” , while it described white women’s hair as “fine and flat” and “normal”. The advert sparked outrage, with many rebuking its racist connotations.

The advert also prompted EFF leader Julius Malema to issue a directive to the party’s members to “Attack”. This culminated in damage and vandalism to a number of Clicks stores, forcing hundreds of the retailer’s stores to shut up shop on Monday.

“We recognise this event has had a significant impact on our people and our customers, and we have taken a decision to close our stores for a day on Wednesday 9 September. We will use this opportunity to engage directly with all our store staff across the country to provide counselling and support. We will be supported by the ICAS Employee Health and Wellness Programme,” Clicks said on Tuesday.

On Monday, Daily Maverick reported on the extensive damage to the Clicks store at the Lemon Tree Shopping Centre in Alberton and sporadic attacks on Clicks stores across the country.

The Gauteng SAPS also said a case of malicious damage to property had been opened after a group of people stormed a Clicks store in Bryanston, north of Johannesburg, and kicked down shelves and destroyed property. The police said no injuries had been reported in either the Alberton or Bryanston incidents.

“Gauteng Commissioner of Police, Lieutenant-General Elias Mawela has warned that law enforcement agencies will not hesitate to act decisively against anyone who acts criminally, including those who destroy property and/or incite violence,” the police statement said.

However, members of the EFF continued protesting and intimidating Clicks staff on Tuesday, even after they became aware of the court interdict against their actions.

On Monday, the high court dismissed Clicks’ first bid to interdict the EFF’s protest action outside its stores. However, later that day, Clicks launched a second urgent bid in which they succeeded.

“We are here, we are not going anywhere,” said a member of the EFF after he was alerted to Clicks’ court victory while protesting at the Clicks store in Menlyn, Pretoria. He said the party would continue protesting despite the interdict.

In a statement, the EFF said: “Our interactions with customers and employees have been peaceful, and we would like to advise all law enforcement agencies, be it private or the state, to read the court order carefully and appropriately to avoid infringing on our right to demonstrate.”

Clicks said on Tuesday: “Clicks confirms it plans to reopen all stores on Thursday after the Johannesburg High Court today granted an interdict preventing the EFF from intimidating and threatening employees and customers, and inciting violence against commercial operations.”

On Tuesday, members of the EFF carried on where they had left off the previous day. Daily Maverick caught up with about a dozen of them as they drove in a white Ford Ranger to their first destination of the morning, the Clicks store in Menlyn Retail Park.

Tearful and terrified staff locked themselves in the store but the EFF group demanded that they come out and close the store. The manager begged the EFF members not to hurt him and his staff or to vandalise the store. “We have closed,” said the manager, with his palms held together.

“The way they came, they scared me. It’s like they were attacking us,” said a visibly shaken female staff member.

The EFF bakkie also made a stop at the Olympus Village Clicks, but it was closed. A note at the entrance to the store read: “Protected by Psalm 91.”

One EFF member neatly wrote, “Owned by EFF” just above the note, while he and his fellow members said that all Clicks stores were now under the control of the EFF.

On Tuesday, the EFF Amajuba Region announced on its Facebook page that its chairperson had been arrested, along with 14 other members. However, the region announced a few hours later on the same platform that, “The fighters have been released without being charged. All the racists will vomit because we are going back to Clicks Newcastle mall tomorrow.

“All racists can jump to the nearest hell,” it said.

Meanwhile, the SA Human Rights Commission (SAHRC) confirmed to Daily Maverick that it was investigating the Clicks advert.

“Our investigations will continue without delay or interruption as the central focus is on the hair advert. We hope to have a constructive interaction with all the entities involved in this racially insensitive and divisive hair advert,” said Buang Jones, the SAHRC Gauteng legal head. DM