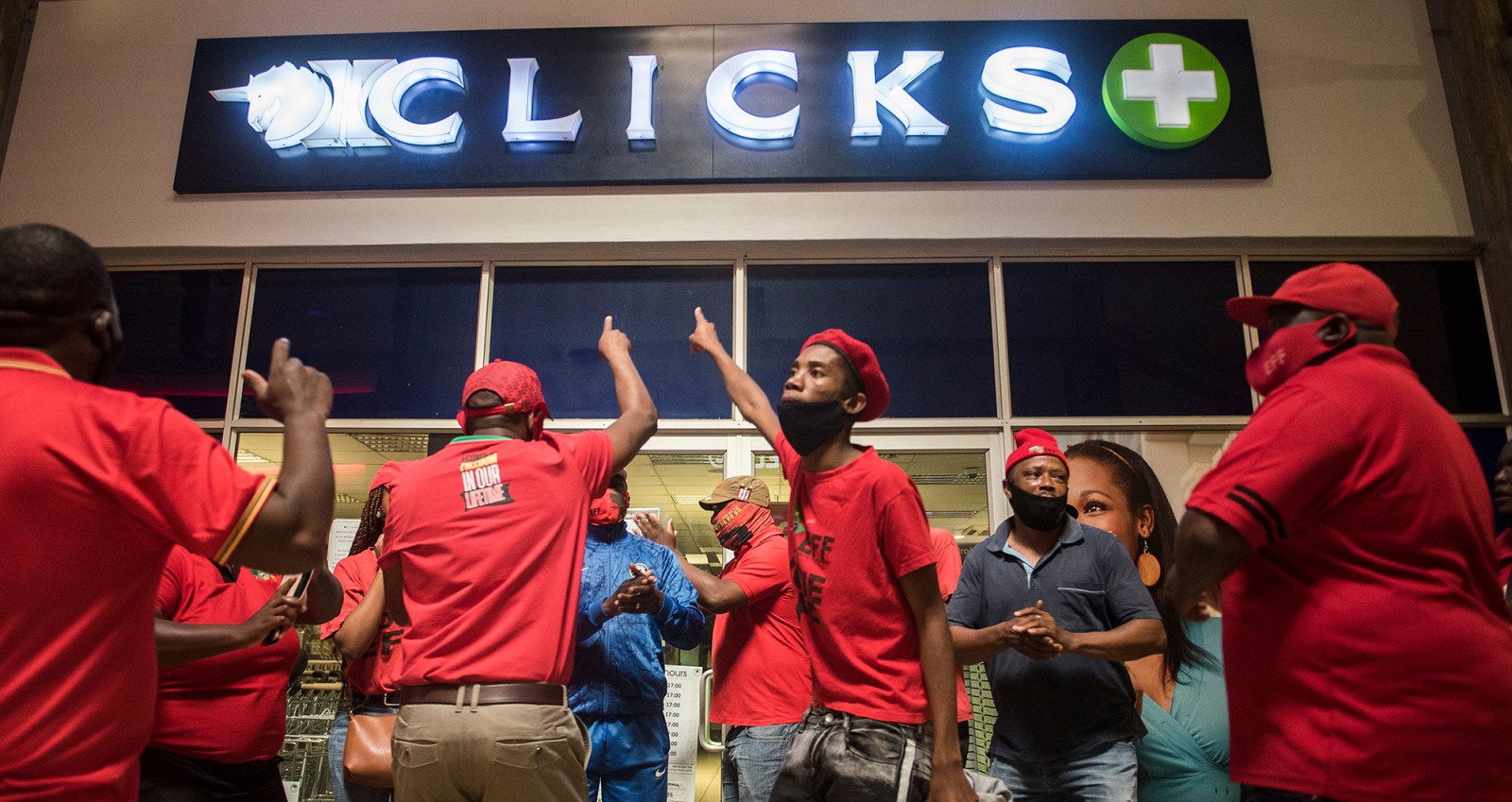 EFF members protest outside a closed Clicks store in Protea Gardens, Soweto. The EFF embarked on a nationwide protest against the chain store after the running of a controversial hair advertisement. (Photo: Shiraaz Mohamed)

Clicks CEO Vikesh Ramsunder said of about 880 Clicks stores, at least 400 were forced to close to protect customers and staff.

This came after Clicks put out an advert which described black women’s hair as “dry and damaged” and “frizzy and dull”, while labelling white women’s hair as fine, flat and normal.

Extensive damage was caused at the Lemon Tree Shopping Centre Clicks in Alberton, where items were ripped off shelves and flung on the floor and the glass entrance doors shattered.

An employee of the store, who asked not to be named, said:

“One would think they would be provoked upon finding the store open, but their attack on the store was totally unprovoked as we were closed when they pounced. They broke in and went on to trash the store.”

“We are here to assist them to keep the store closed as per the directive of the party leadership.”

The staff and store manager were already inside the store when members of the EFF arrived. They left the store at around 9.30am, squeezing past members of the red berets and disappearing into a growing number of onlooking shoppers.

Chauke said they would intensify the protests in the following days if Clicks continued to open its stores. The group left when it became clear that the store was not going to open for the rest of the day.

The EFF has positioned itself as advocates against racism, but some South Africans who took to social media said the party was feigning empathy for poor black people as a ploy to stay relevant.

In Alberton North, the entire Alberton City Shopping Centre, which houses a Clicks store, was closed.

“I’m sure you heard about the EFF thing; they were here, and as a safety measure we closed the entire centre,” said a security guard.

The Clicks stores in Newtown and Klerk Street were closed and undamaged on Monday, while the eMalahleni Clicks was petrol bombed on Monday morning.

There were no incidents of violence at the Clicks in Sandton City, where Daily Maverick counted 11 police officers and at least 13 security personnel members from a private security company.

The Clicks store at Centurion was partially damaged and there was a large crack on the glass entry door. When asked if they had cracked the door, one EFF member said, “We found it like that.”

When the EFF members realised they were talking to journalists from Daily Maverick they immediately asked the journalists to leave.

Speaking on Radio 702 on Monday evening, Clicks CEO Vikesh Ramsunder said of about 880 Clicks stores, roughly 400 were forced to close to protect customers and staff.

The EFF has vowed to continue protesting and keeping stores closed, while Clicks said stores would be open for business on Tuesday.

In a statement on Monday, Clicks said:

“Protest action by the Economic Freedom Fighters is currently happening at 37… stores across KwaZulu-Natal, Gauteng and the Western Cape. Seven stores were damaged including Saveways in Witbank and Cycad in Polokwane.

“Clicks strongly condemns violence of any kind or intimidation of staff and its customers. Clicks will take legal action against perpetrators and those seeking to incite violence or harm our people and our stores.” DM