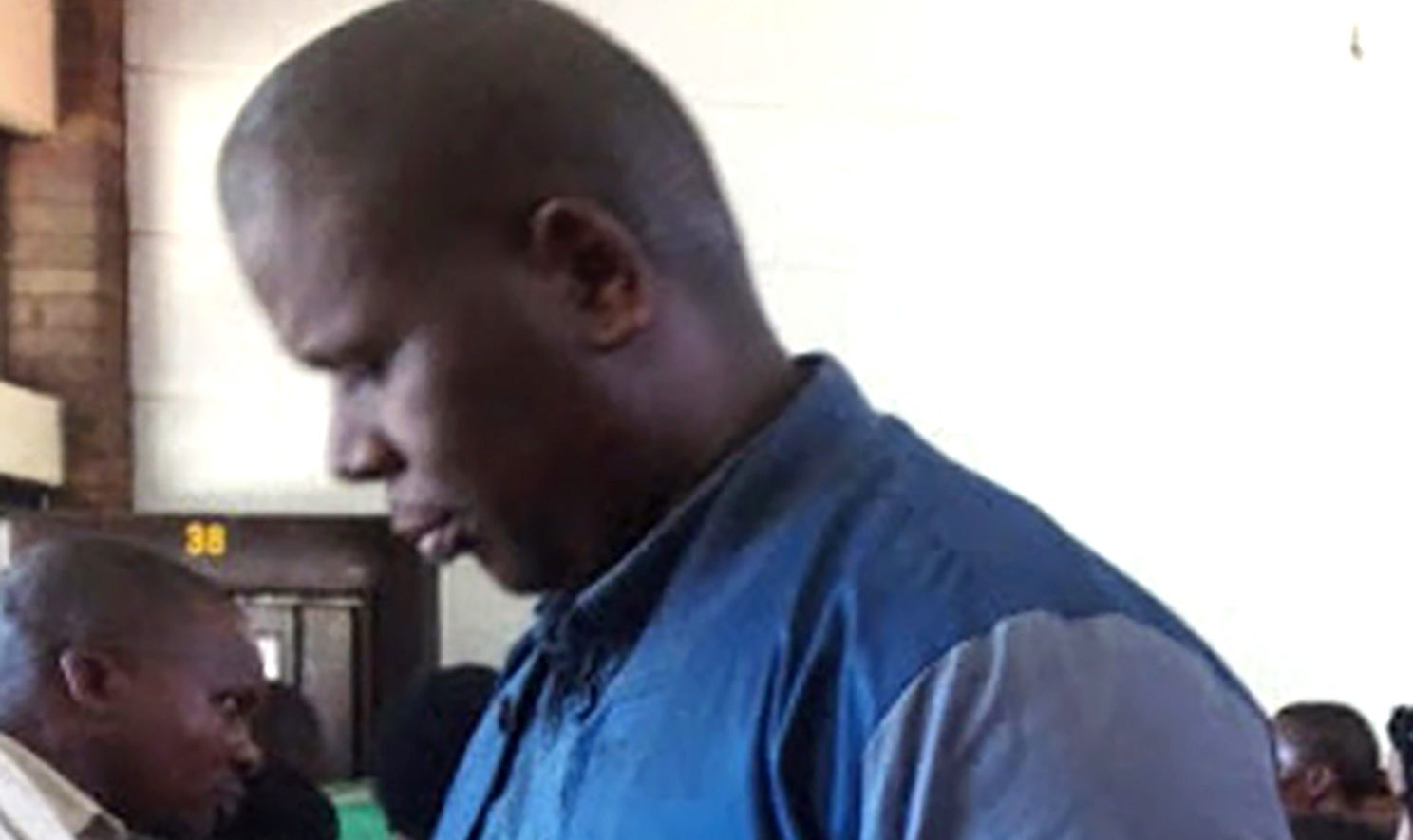 Sibonelo Myeza accused of the murder of ANCYL leader Sindiso Magaqa,he appeared at the Scottburgh High Court KwaZulu Natal south coast with two other accused not in the picture Photo: Orrin Singh/Sunday Times

An ex-policeman arrested in connection with the assassination of former ANCYL secretary-general and later Umzimkhulu councillor, Sindiso Magaqa, in 2017 has been named in an alleged plot to kill Western Cape Deputy Judge President Patricia Goliath.

The inmate, Sibonelo Myeza, appears to be “untouchable” within the confines of prison, an investigator found, and has denied sharing a cell with the whistleblower who exposed the alleged plot.

In a preliminary report, commissioned by the Judicial Inspectorate for Correctional Services (JICS) after Western Cape Deputy Judge President Patricia Goliath had been informed of the alleged hit, the investigator noted that Myeza had appeared “over confident” in interviews.

“It appeared that being an accused in political killings, officials is [sic] either scared or show respect to inmate Myeza,” noted the investigator, adding “All officials including the head of centre that came into contact with inmate Myeza in the presence of … knew him and was shown respect towards him.

“It appeared that inmate Myeza can be one of those respected untouchable inmates,” the preliminary report noted.

The report has been forwarded to the Minister of Justice and the Office of the Chief Justice.

On Monday 7 September the Ministry of Justice announced that the report had been forwarded to the SAPS and the State Security Agency for further investigation.

The report was commissioned by JICS after Goliath had, on 3 June 2020, been contacted by members of the Grahamstown Bar and advised that a prisoner had called the office and had informed them that a “hit” had been placed on Goliath’s life by another judge, John Hlophe.

Members of the bar relayed the call to a judge at the Grahamstown High Court who then suggested that Goliath be informed immediately. On the same day, Goliath informed the Office of the Chief Justice and additional security measures were immediately put in place.

Goliath confirmed to Daily Maverick that she had received two reports from JICS relating to the “matter” but would not make these public or discuss the contents. She confirmed that her security had been beefed up.

As investigative journalist Greg Ardé set out in his book War Party – How the ANC’s political killings are breaking South Africa, members of Crime Intelligence became involved in the investigation into Magaqa’s killers back in 2017.

Magaqa was seriously injured during an attack by AK-47-wielding assassins in June 2017 and died in September the same year. His family allege he had been poisoned after surviving the attempt on his life.

Myeza has been accused, along with businesman Mxolisi Ncalane and former taxi-owner Mbulelo Mpofana, of conspiring to hire hitmen Jabulani Mdunge and Sibusiso Ncengwa, to murder Magaqa. The accused appeared in the Umzimkhulu Magistrate’s Court in May 2019 and were denied bail.

In that instance, the state presented evidence that had placed Myeza at the scene of the crime and which proved that he had been central to the planning of the murder.

The investigating officer in that matter also said that Myeza, Ncalane and Mpofana “were likely to have been involved in the deaths of councillors Khaya Thobela and Mduduzi Tshibase.”

Thobela, who was the speaker of the Umzimkhulu Municipality and Tshibase, who was a councillor, were murdered in April and June 2017. Both had exposed endemic corruption in the area.

JICS first interviewed the whistleblower at length in June 2020 and again in August, when a sworn statement was taken.

“During the interview it was observed that the inmate’s … version is consistent with his version of 21 June 2020,” noted the JICS report.

The whistleblower told the investigator that in May 2020 he had found himself in a cell with Myeza where he had overheard a call Myeza had received from a person named in the report.

This person had attempted to recruit Myeza to participate in an alleged plot to assassinate Goliath.

“After inmate Myeza ended his call he told the inmate … that it was one of his friends who is a hitman.”

This man had allegedly informed Myeza that there was a plot to kill Goliath and that there was “a senior Hawks officer who is a friend of Judge Hlophe who is making the arrangements with the hitmen.”

The plan had been called off as “Judge Hlophe heard something/information leaked and that Ms Patricia Goliath got herself bodyguards for protection.”

Myeza told the investigator that he had never shared a cell with the whistleblower. Two statements were obtained from fellow prisoners who corroborated this version. However, Myeza did admit that the whistleblower had visited his cell.

Another inmate who did share the cell with Myeza told the investigator that the whistleblower had indeed visited their cell, but had never “shared” it with Myeza.

A correctional official was also interviewed, but a request by the investigator for the “cell register” in order to check where offenders were accommodated was not forthcoming. It turned out that no “cell register” existed at all.

During the interview, the investigator noted that one of the inmates who had shared the cell with Myeza “appeared very nervous and could have been guided as to what to say”.

The whistleblower, the investigator added, “was terrified of inmate Myeza and mentioned off the record that Myeza threatened him that he will find out where his family lives”.

The investigator noted that “all officials including the head of centre that came into contact with inmate Myeza in the presence of … knew him and was showed respect [sic] towards him”.

The whistleblower told the investigator that when he had learnt of the plot to kill Goliath he had phoned the Eastern Cape Bar from a public telephone. He was referred by a clerk to the spokesperson of the Judicial Service Commission, Mr Sello Chiloane.

He said he had informed Chiloane of the alleged assassination plot.

Daily Maverick’s questions to the Office of the Chief Justice have not been responded to.

It read: “The allegations that our client ordered a hit on the Deputy Judge President surfaced in an article published by GroundUp on 4 September 2020 and was then circulated on various media platforms on 5 September 2020.

“Our client was shocked by the publications by the various media houses, as the averments are baseless and false.

“We will attend to consultation with our client during the week of 7 September 2020 and will thereafter respond comprehensively to the allegations as contained in the publications.” DM