Human rights sacrifices during the pandemic: Who and Why? 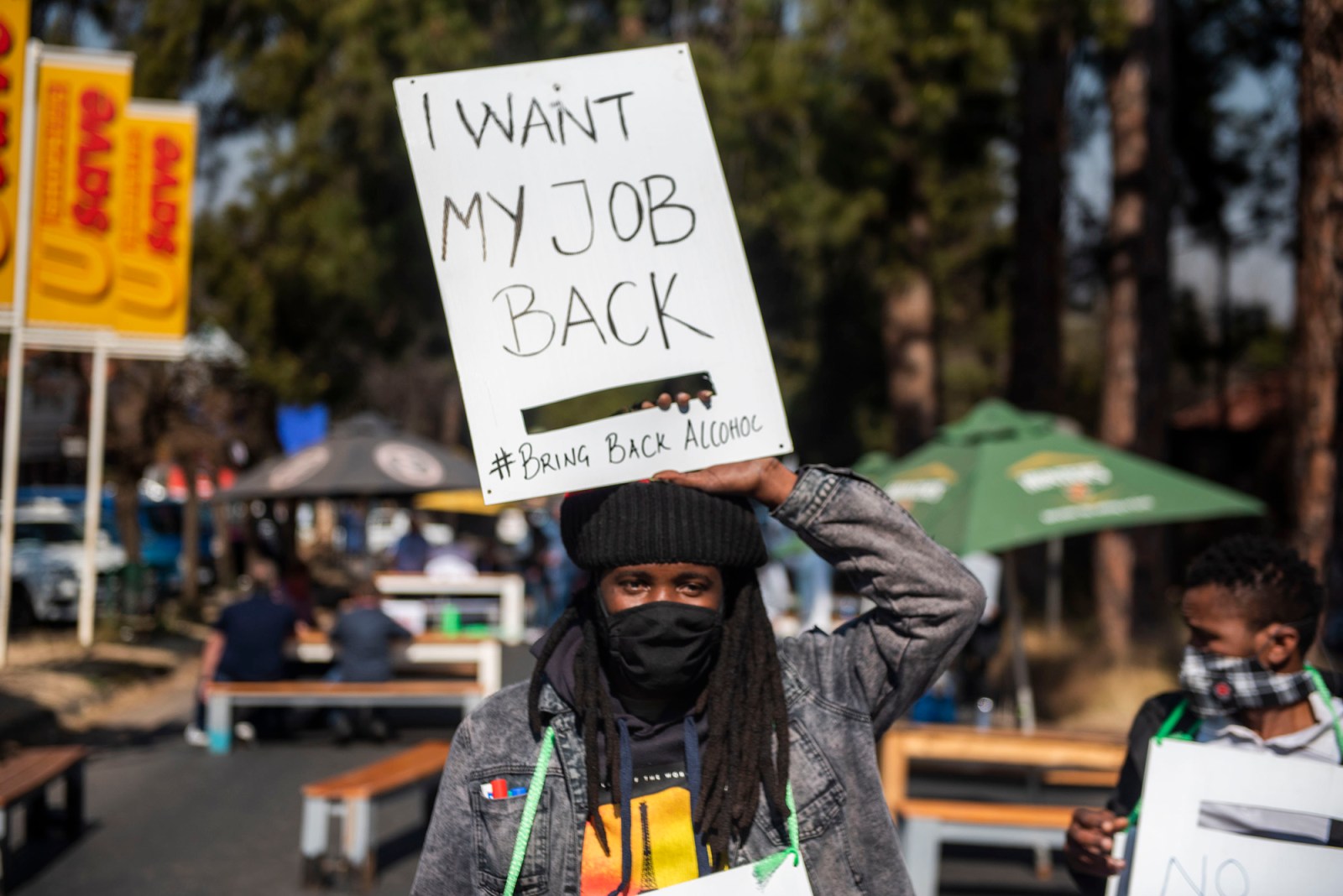 A sizeable majority of South Africans remain willing to sacrifice certain fundamental rights to halt the continued spread of Covid-19, but the fault lines are beginning to show, a survey reveals.

The South African Bill of Rights is the cornerstone of the nation’s democracy, as articulated in section 7 of the Constitution of the Republic of South Africa, 1996. Yet, government efforts to combat the Covid-19 pandemic have relied heavily on the temporary suspension of certain rights under the Disaster Management Act 57 of 2002, among these the freedoms of assembly, association and movement. Given the country’s history of authoritarianism and human rights abuses, how supportive is the public of this temporary and conditional suspension of their freedoms?

To answer this and other questions, the University of Johannesburg (UJ) and the Human Sciences Research Council (HSRC) conducted an online lockdown survey to understand and monitor South African experiences, attitudes and behaviour during the pandemic. Data collected during the hard lockdown (Level 5) period showed that a significant majority (78%) of the adult public were willing to sacrifice some human rights if it helps to reduce the spread of Covid-19. This was the finding from the first round of surveying between 13 April and 11 May, consisting of more than 12,300 participants.

As the country moved to lower lockdown levels, a modest decline in support for the limitation of freedom occurred as frustration and anger over the pandemic intensified, falling eight percentage points to 70%. This is based on 2,570 responses during the first phase of our second round (8-17 July) of surveying.

While this change in opinion is not especially large on average, it masks more substantive variations among certain groups within society between April and July. The largest observed declines in willingness to sacrifice rights are evident among white adults, those older than 55 years, men, and suburban residents, while the largest increase is among rural residents (Figure 1). A clear class divide exists, with middle-class suburbanites far less open to sacrificing human rights than their less affluent peers. 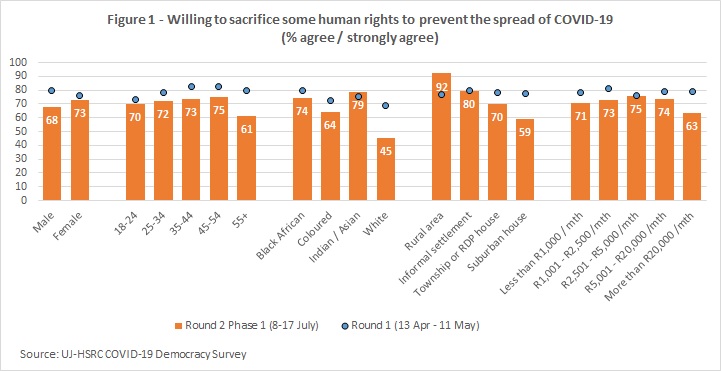 Round 2 of our data also points to an appreciable political divide in willingness to sacrifice rights. African National Congress (ANC) supporters largely approved of such sacrifice (78%), while similar levels of support were manifest among Economic Freedom Fighters (EFF) supporters (74%). By contrast, only 54% of Democratic Alliance (DA) backers said that they would be prepared to have their individual liberties limited.

These results partly reflect attitudes towards government and confidence in President Ramaphosa in particular. Those who felt the president was performing well in his handling of the pandemic were more inclined to accept limitations on their rights (69%), compared to only 31% of those who were critical of his performance. One of the reasons for growing polarisation on willingness to sacrifice is declining presidential approval ratings during the past four months. Confidence in the performance of the president has fallen by 24 percentage points over this period.

Party position on the government’s Covid-19 response is also likely to form part of the explanation. For instance, the DA leadership (especially John Steenhuisen) has been critical of government lockdown measures in recent months, arguing that they were excessive and irrational. Much of this critique has centred on the economic damage caused by the lockdown.

Taken together, these socio-demographic, spatial and political differences are leading to polarisation in attitudes, with deep societal fault-lines beginning to emerge on this important issue.

Negative emotional experiences during the lockdown influenced attitudes towards human rights. Experiences of anger and sadness diminished public readiness to have freedoms curtailed. As people became more frustrated and distressed by the Covid-19 lockdown, their commitment to the common good wavered. The following personal messages to the president captured in our survey convey the despair, aggravation and desperation many have experienced during this difficult time:

“This pandemic has violated our right and it has brought lot of crisis for human nature. I starved a lot while I was unable to work now I couldn’t get food and separated from my family.”

“We have sacrificed so much for this country, yet you ask more of us. We can’t keep going on like this… People are safer from the virus in some aspects, but now they are dying of hunger rather than the virus.”

“I think you should consider the psychological effects of the lockdown and learn to TRUST citizens.”

Why attitudes towards sacrifice matter

Attitudes towards rights show a tendency to affect compliance with regulations to prevent the spread of the virus, illustrating the important behavioural impact of these views. For example, 75% of the survey participants who were willing to sacrifice their rights reported always wearing a face mask when in public compared to 64% of those who were unwilling to sacrifice their rights. In addition, while 54% of those with a pro-sacrifice stance believed the restrictions were not strict enough, 46% of those disfavouring rights sacrifice felt the restrictions were too harsh.

There is also an association between the position of rights sacrifice and policy preferences. Individuals who were willing to sacrifice freedoms also expressed significantly higher support for the government’s ban on cigarettes and alcohol sales. This group was also less inclined to support opening up places of worship and refunding school fees, and more likely to back increasing the value of social grants.

One obvious question the analysis above raises is which specific human rights would South Africans be prepared to concede? Our results suggest that individuals had differentiated views on which human rights they would sacrifice, with some more favoured than others (Figure 2). Respondents were provided with a predefined list of six freedoms they might be willing to forgo for the greater good. A majority said they would sacrifice their right to religious assembly (56%) and their freedom of travel (52%). 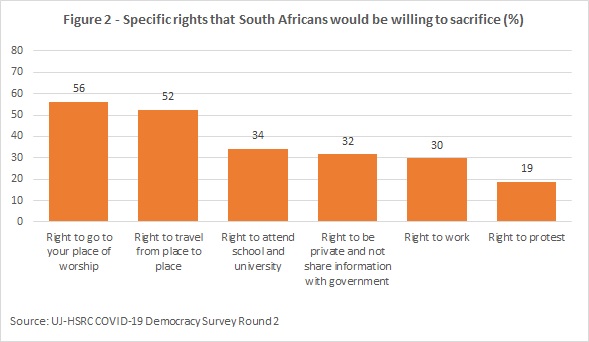 Only about a third were willing to temporarily suspend the right to work (30%) or attend school or university (34%). A similar share (32%) believed that the right to privacy could be limited, while around a fifth (19%) felt that their right to protest could be limited. There was a significant class divide here with better-off South Africans more prepared to sacrifice their freedom to gather for worship as well as their right to privacy than their poorer counterparts. This speaks to further polarisation on the nature and meaning of rights and how they are understood, with individual liberties being most important to the wealthy among us while the poor tend to see rights within the context of social solidarity and the greater good.

Increasing polarity over human rights issues has exposed fundamental class, racial and political divisions in the country. If these divisions become further entrenched, it could have a profoundly detrimental effect, undermining our collective effort to fight Covid-19 and rebuild the South African economy. DM/MC

Data are being collected in the online multilingual UJ/HSRC Covid-19 Democracy Lockdown Survey from all willing respondents in South Africa aged 18 or over. It is accessible using the #datafree Moya Messenger App on the #datafree biNu platform, or alternatively using data via https://hsrc.datafree.co/r/ujhsrc. Results are weighted by age, population group and education, making them broadly representative of the population. The survey will be running for one more week, and readers are invited to complete the questionnaire.

A summary of the survey’s Round 1 and 2 findings and a fuller explanation of the methodology can be found at:

The following articles based on Round 2 of the UJ-HSRC Coid-19 Democracy Survey data have been published in Daily Maverick to date.

Masks – Who wears them and Why it matters

Links to previous Daily Maverick articles based on Round 1 of the survey data are listed below:

Smoke and mirrors: Public perceptions on banning the sale of cigarettes