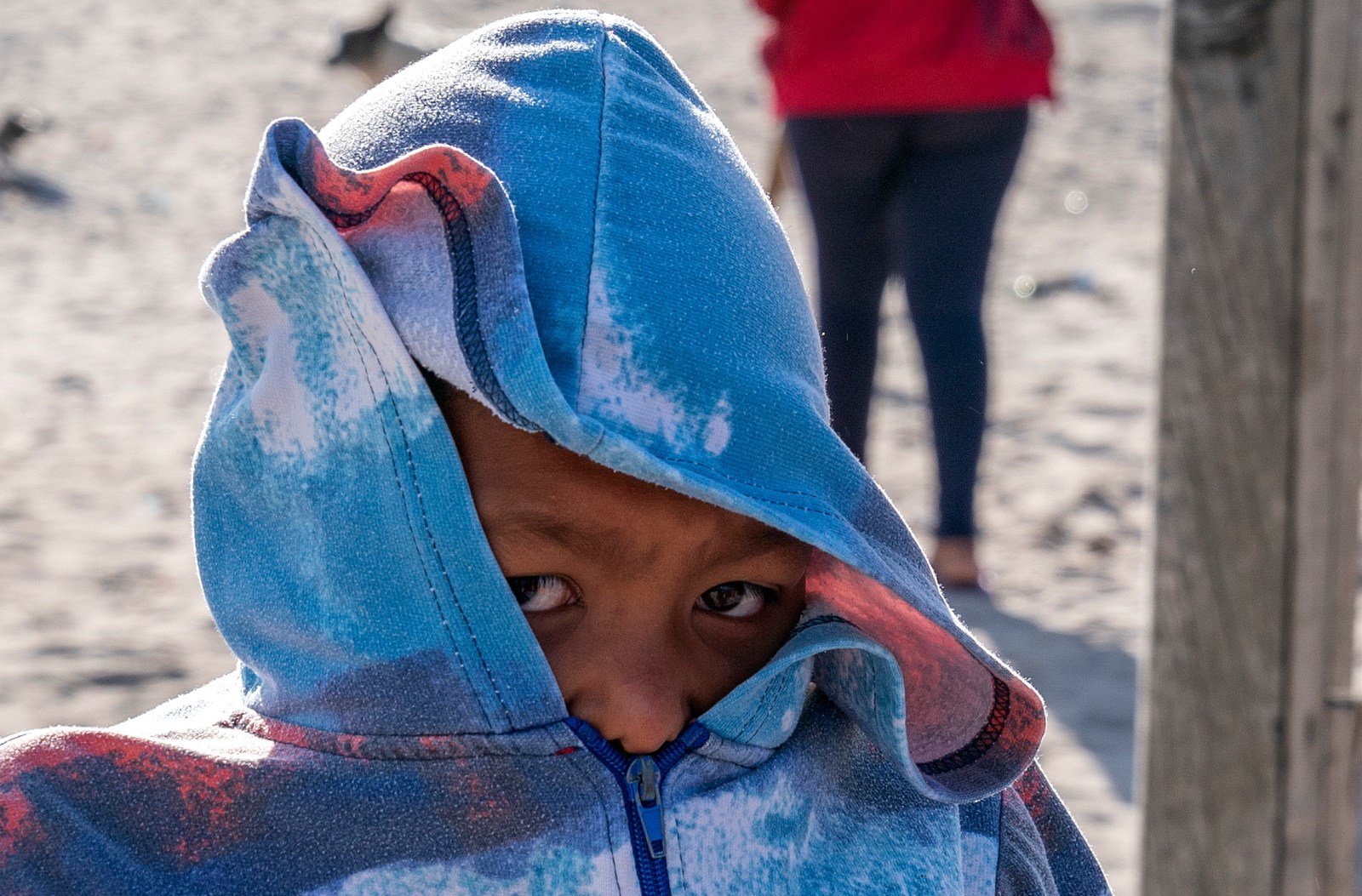 How is class related to the impact of Covid-19 and the lockdown? Previous articles based on the recent UJ/HSRC survey demonstrated that poorer people have tended to suffer more than those who are relatively better off. However, as we unpick the data, a more complicated picture emerges.

We distinguish between individuals whose income exceeds R40,000 a month, those with an income of less than R10,000 a month, and those in the middle. In a very rough way, these categories might be regarded as proxies for three classes – wealthy, working and middle – but ‘class’ is a complex and contested concept, and, like most questionnaire data, ours does not lend itself to including the tiny minority of powerful individuals who are very rich. So, we will stick with income groups.

The approach adopted is to cross-tabulate the three groupings with other variables captured in the survey. We do this to suggest social and political implications.

Our statistics come from all three phases of our survey, which began on 13 April, not long after lockdown started (on 26 March), through to 4 May, just after we moved to Level 4 (on 1 May). The survey, which is broadly representative of the population of South Africa as a whole, showed that the vast majority, 83%, was in the lower-income category, 23% had middle incomes, and 4% was in the higher income group.

A better sense of the composition of our three groups might be helpful. For this we asked: ‘Which of the following best describes what you were doing before the lockdown?’ Among lower-income people, the response was 27% ‘employed full time’, 28% ‘unemployed’, and the remaining 45% fell within a range of other categories (including part-time and casual workers, students and pensioners). 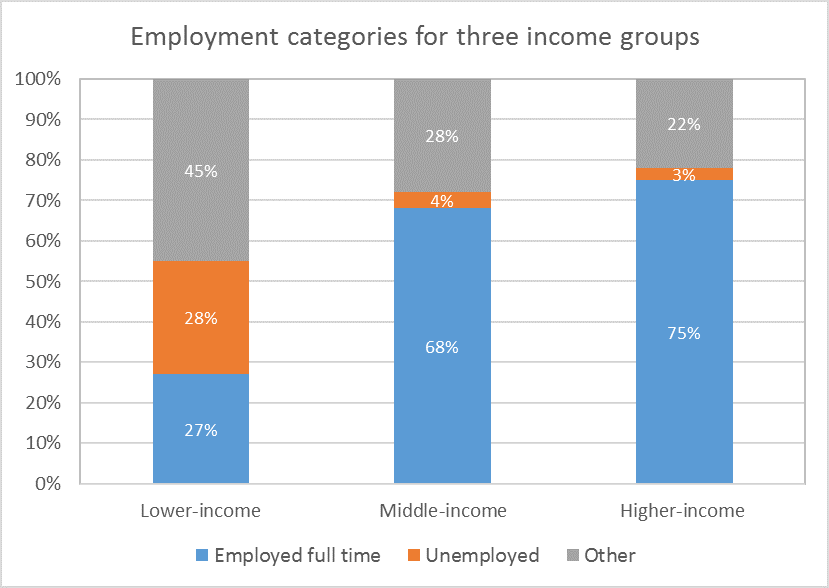 Unfortunately, we did not ask detailed questions about jobs, but the lower-income group is likely to include most manual workers in manufacturing and the public sector, most retail, domestic, farm and security workers, and taxi drivers, as well as many small business owners. The middle-income group comprises a mix of salaried staff (such as mid-level civil servants, junior and middle managers, teachers, some manufacturing workers, etc) and people one might describe as petty bourgeois (e.g. shop owners, some self-employed professionals). The higher-income people include the likes of senior and executive managers, chartered accountants, surgeons, pilots and attorneys, plus owners of larger firms (capitalists).

How do responses to key questions fit the three groupings?

Most indicators show lower-income earners at one end, higher-income earners at the other, and middle-income earners in between. A typical example, somewhat relevant to this piece, are responses to the question: ‘In the immediate future, do you think the coronavirus pandemic is likely to make South Africans more united and supportive of each other?’ For this, 46% on lower incomes, 52% on middle incomes and 58% on higher incomes answered in the affirmative. That is, lower-income people were more sceptical, but the difference between the two ends was fairly small.

There are just a few cases that broke the ‘class system’ pattern. These include answers to a question about ‘removing all restrictions on movement’, which was opposed by 95% on middle incomes, 94% on higher incomes and 92% on lower incomes. Here the figure for the middle-income group was greater, but the differences were narrow.

It is worth contrasting questions that revealed minor differences among the income groups with those where the gulf was substantial.

The former cluster, those highlighting convergence, consisted almost entirely of responses to policy questions. A proposal for free cell phone data found favour with 52% of those on lower incomes, 54% on middle incomes and 55% on higher incomes; so a gap of only 3% between the smallest and greatest figures.

With the question about removing all restrictions on movement, the gap was also just 3%. When it came to support for ‘informal street traders and spaza shops remaining open during the lockdown’, 36% of those on lower and middle incomes backed the proposal and the figure for those on higher incomes was 38%; a 2% difference. 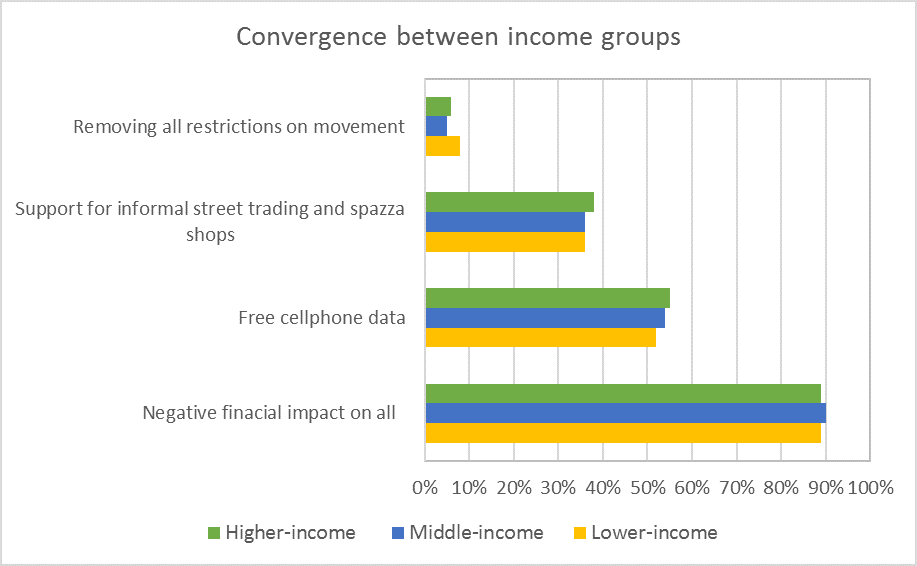 In all these three cases, the expectation was that government would, or would not, do something, thus distancing responses from personal circumstances. The cases also touched on the dominant narrative, which gave primacy to the existential threat of Covid-19, and emphasised equal chances of becoming infected, thus ‘we are all in this together’.

Free movement and informal trading were presented as a hazard; while free data was regarded as valuable for information and communication, hence combating the menace (as well as removing an essential and burdensome expense).

There was a fourth example of convergence between income groups. Respondents were asked how ‘concerned’ they were about the effect of the pandemic on the ‘financial situation of all South Africans’. The response ‘very concerned’ included 90% of those on middle incomes and 89% of those on lower incomes and higher incomes; a span of only 1%. Again, this question was largely unrelated to personal circumstances, which may help explain the similarity in levels of concern.

In contrast, when respondents were asked how ‘concerned’ they were about the pandemic’s effect on their ‘personal financial situation’, the pattern was completely different. This time the ‘very concerned’ included 89% of those in the lower-income group, 66% of those on middle incomes and 40% of people on higher incomes. So, when respondents were pressed to take account of their personal circumstances, the range between those on lower incomes and those on higher incomes shot up from zero to 39 percentage points. 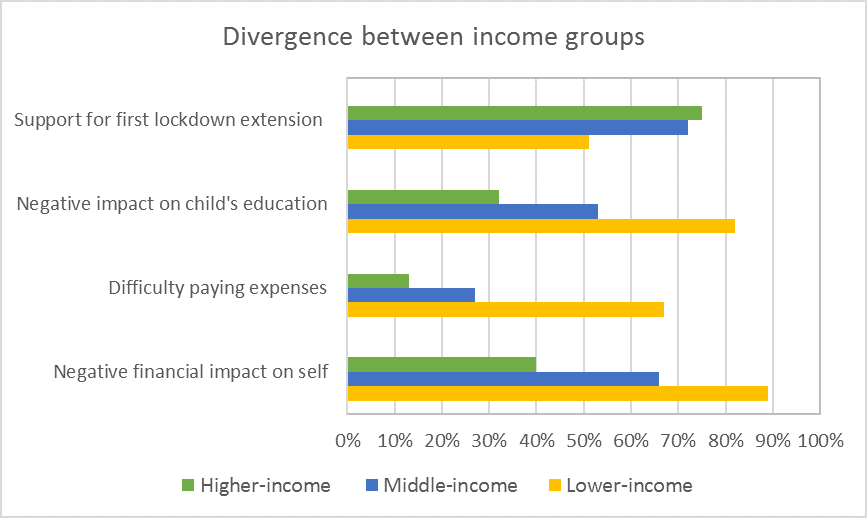 There were three other questions that demonstrated substantial and noteworthy gulfs between lower-income and higher-income groups. In the first of these, people were asked to comment on whether ‘due to my financial situation, I have difficulties paying for my expenses’. The figure for ‘strongly agree’ was 67% for lower-income people, 27% for the middle-income group and 13% for those on higher incomes; a difference between the two ends of 54%. So, when people were asked about actual experience rather than mere ‘concern’, the disparity was even greater.

Income group inequality was also underlined by the question: ‘How concerned are you that the coronavirus situation will have a negative impact on your child’s education?’ For this, 82% of those on lower incomes, 53% on middle incomes and 32% on higher incomes were ‘very concerned’; a 50% difference. While there was widespread worry about education, this was considerably less for those on higher incomes, reflecting the reality that, for various reasons, their children were more likely to cope with online teaching.

The key conclusion is that when respondents were asked about their concrete concerns and experiences rather than general issues, significant divergences emerged, strongly in some cases. While, from a certain standpoint ‘we are all in it together’, people experience their reality very differently, with this determined, to a substantial degree, by income.

Responses to one final question highlighting divergence hint at a salient political implication of income difference. People were asked for their opinion on the president’s announcement (on 9 April) that lockdown would be extended for an additional two weeks. While 51% of the lower-income group supported the decision, the figure rose to 72% for those on middle incomes and 75% for higher-income people; a difference of 24% between the two ends.

A matter of class

There were numerous reasons why Level 5 had a greater adverse impact on lower-income earners than on middle income and higher-income groups. Lockdown became a class issue. This antipathy may still be more widespread than among those on higher incomes.

Moreover, those on lower incomes were no less concerned about their health than those on middle and higher incomes, and with a smaller proportion able to work from home, and greater proportions living in densely packed neighbourhoods, using public transport and working in close proximity to other people, the numbers sceptical about national unity are likely to expand, the range of class issues will broaden, and conflict will become more widespread. DM/MC

This is the last of 10 op-ed articles by researchers from the University of Johannesburg’s Centre for Social Change (CSC) and the Human Sciences Research Council’s Developmental, Capable and Ethical State division (DCES). Data came from the online multilingual Covid-19 Democracy Survey. Results are weighted by race, age and education, making them broadly representative of the population. See https://www.uj.ac.za/newandevents/Documents/UJ HSRC summary report v1.pdf.The survey used the #datafree Moya Messenger App on the #datafree biNu platform. The research team intends to conduct a similar survey in the future and welcomes questions that Daily Maverick readers may wish to suggest.

The previous nine articles in the series were: