Even before the lockdown, many living in South Africa had inadequate food to meet their needs. The numbers have risen alongside increasing financial hardship associated with the new situation.

Thirty-four percent of people in South Africa now go to bed hungry. This is a key finding from new data contained in Phase 2 of the Covid-19 Democracy Survey.

Phase 1, covering 13-18 April, showed 28% answering yes to the question: Have you gone to bed hungry? About a week later, in Phase 2, which covered 18-27 April, the number had increased by six percentage points.

This data comes from a representative survey conducted by researchers from the University of Johannesburg and the Human Sciences Research Council (HSRC). Phase 1 included 5,481 questionnaires that were completed and weighted; Phase 2 included 3,543.

Even before the lockdown, a high proportion of people living in South Africa had inadequate food to meet their needs. The numbers have clearly risen alongside increasing financial hardship associated with the new situation. 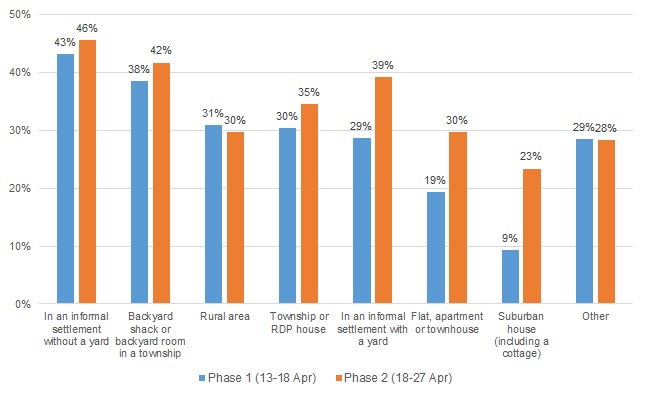 The pressing problem of hunger, even starvation, was underlined in responses to an open-ended question: “For you personally, what is the worst thing about the lockdown?” Answers were thematically coded and counted, then weighted like the survey as a whole. Responses about hunger were frequently linked to those about financial hardship and lack of suitable clothing. In the Phase 1 findings, 31% did not have enough food or clothing or lacked sufficient funds to buy it.

This figure can be compared with those for the next most prominent themes: confinement (9%), loneliness (9%), and failure of other people to comply with regulations (8%). By contrast, only 4% gave fear of contracting Covid-19 or general uncertainty about health as the “worst thing”. 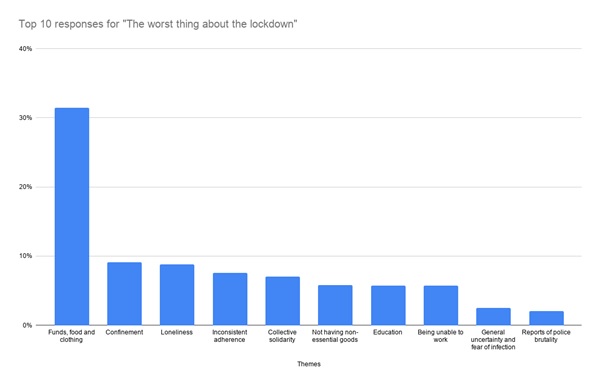 Anonymous responses to the open-ended question brought home the suffering that many people experience:

“I am an unemployed mother of three kids and I don’t know where my next meal is coming from.”

“Staying indoors with an empty stomach, and feeling helpless and breastfeeding a small child and no be [sic] able to pay rent.”

“Hungry, we are starving at home.”

“We are starving as I am a breadwinner. I can’t provide anything for my mother who is taking medicine everyday.”

“Going to bed with an empty stomach. Seeing my neighbours going to bed hungry.”

“People are starving, they don’t get food parcels they were promised.”

The survey also found that most South Africans understood the need for the lockdown, and supported the president’s 9 April extension announcement when he spoke of the need for a “path that both saves lives and protects livelihoods”.

The R500-billion support package, particularly increased benefits and the new Social Relief of Distress grant, may provide hope for those who are hungry. However, these changes will leave many people without food, and there are complaints about the size of the grants.

Moreover, a major challenge is to make sure that improvements are effectively implemented, well-targeted and not influenced by corrupt practices. From the “worst experiences” reported in the survey, the degree of success in alleviating hunger is likely to shape continued support for the government’s phased approach to reducing regulations.

For many people, malnutrition and empty stomachs were a daily reality even before the lockdown. But hunger, sometimes starvation, have become more widespread. South Africa must confront the pressing and awful reality: we face intense hunger and diffused starvation. DM/MC

This is one of a series of articles based on the Covid-19 Democracy Survey conducted by researchers from Centre for Social Change (CSC) at the University of Johannesburg and the Developmental, Capable and Ethical State division (DCES) at the Human Sciences Research Council. The survey can be undertaken free of charge, by anybody in South Africa aged 18 or over with access to the internet. Go to:  https://hsrc.datafree.co/r/covidUJ. Results were weighted by race, age and education, making them broadly representative of the population. Phase 1 of the survey covers the days from 13-18 April, Phase 2 from 18-27 April, and Phase 3 from 27 April onwards. See: https://www.uj.ac.za/newandevents/Documents/UJ HSRC summary report v1.pdf. The survey uses the #datafree Moya Messenger App on the #datafree biNu platform.