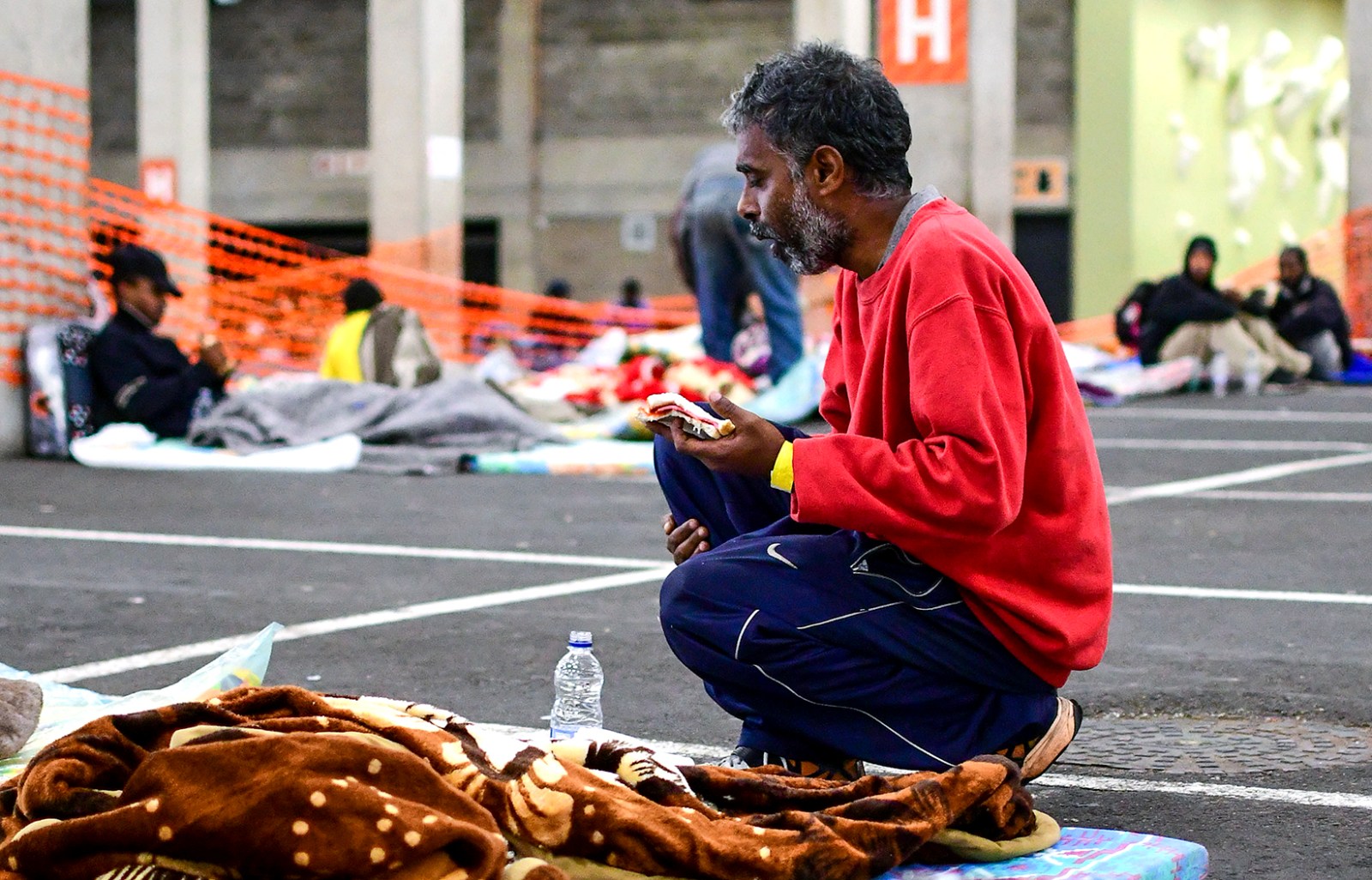 ‘Feed the Poor’ provides food for the displaced at a shelter at the Moses Mabhida Stadium parking lot during lockdown in Durban. (Photo: Gallo Images / Darren Stewart)

Most people in South Africa support the lockdown and government policies. But there are differences of opinion on what changes need to be made.

Almost everyone in SA agrees on the measures needed to curb the spread of Covid-19, but there are disagreements on what public policies should be implemented to mitigate the effects of the crisis. Some of these differences of opinion cut across class lines. This was revealed in the University of Johannesburg-Human Sciences Research Council (UJ-HSRC) Covid-19 Impact Survey.

The survey revealed that 43% of South African adults have supported lockdown with its current level of restrictions (level 5), a further 37% voiced support with some level of relaxation of conditions, and only 6% want all restrictions on movement to be lifted. This suggests that South Africans will be willing to tolerate some form of ongoing restrictions on their movement in the weeks and, possibly, months ahead.

However, this support differs in the extent to which people have been economically squeezed by the lockdown. 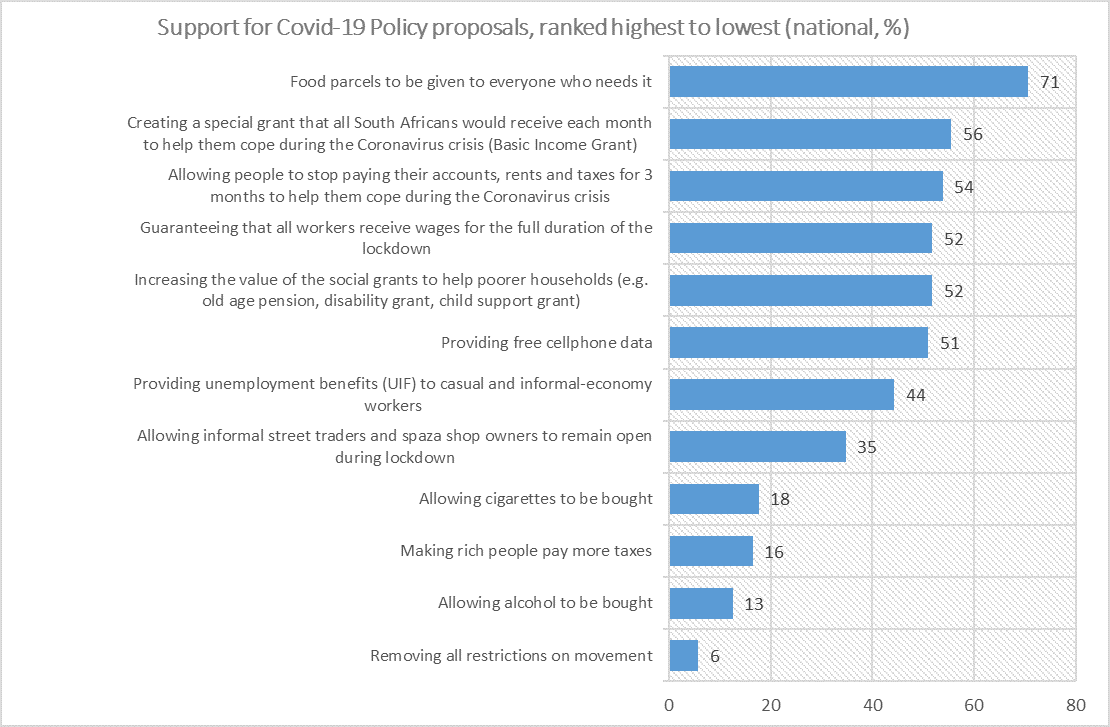 In the weeks following the implementation of lockdown, a number of activists, analysts and academics drew attention to the need for policy interventions to support those who were made most vulnerable by the lockdown. This included calls to top up the child social grant and extend UIF benefits to workers in the informal economy.

When asked about what policy proposals people favoured, the most supported policy suggestion, by a considerable margin, was delivering food parcels “to anyone who needs it”. This was supported by 71% of South Africans, with all races, age groups and levels of education giving it their highest support. A particularly high level of support was evident among the relatively wealthy (those personally earning between R20,000 and R40,000 per month), with 80% supporting this measure – the highest support among all income groups.

The notion that support should be provided to all – not just South Africans – was something that many reflected in messages they wished to convey to the president.

I think the government, when it’s distributing food to people, they should give to everyone who is need for it, including undocumented foreign nationals because everybody is in need of assistance from the government – Black African man, 25-34 years old, KwaDukuza, KwaZulu-Natal.

If there is any help to be given to people, please it has to be inclusive – that is locals and foreign nationals – Black African man, Tzaneen, Limpopo.

Across all income groups, there were similar levels of support for allowing informal traders and spaza shops to operate during lockdown and for free cell phone data to be provided – an important concern with the move to online learning for schools and universities. There was also general support for policies to support debt relief by allowing people to stop paying their accounts, rents and taxes.

Interestingly, both the poor and the wealthy largely rejected a proposal that the wealthy should pay higher taxes. But other policy options presented more polarised opinions by class.

The wealthy, those earning over R40,000 a month, were less supportive of increasing the value of social grants compared to the poorest, those earning under R1,000 a month. Curiously, the wealthy were more supportive of the idea that UIF benefits should be expanded to fund those in the informal economy – 61% supported this compared to only 41% of those who earned under R1,000 a month and who would be more likely to work in the informal economy.

This suggests that while the wealthy are not indifferent to the needs of the vulnerable, they are making distinctions between those they believe are more deserving of support, giving informal workers unable to work during the lockdown priority over grant recipients.

Wealthy South Africans, however, are less tolerant of the deprivations caused by the lockdown.

The findings also show that there is some support for policy interventions that go beyond what has currently been proposed, including establishing a basic income grant. What is harder to know is whether the broad support for increasing social spending will continue to grow or whether this is a fleeting trend. Nearly half of those surveyed said they believed that the Covid-19 pandemic is likely to make South Africans more united and supportive of one another.

Time will tell if this is indeed the case. DM/MC

This is one of a series of articles by researchers from the University of Johannesburg’s Centre for Social Change (CSC) and the Human Sciences Research Council’s Developmental, Capable and Ethical State division (DCES). Data comes from the online multilingual Covid-19 Impact Survey. This can be undertaken, free of charge, by anybody in South Africa aged 18 or over with access to the internet. Go to:https://hsrc.datafree.co/r/covidUJ. Results are weighted by race, age and education, making them broadly representative of the population. Phase 1 of the survey covers the days from 13-18 April, Phase 2 from 18-27 April, and Phase 3 from 27 April onwards. See https://www.uj.ac.za/newandevents/Documents/UJ HSRC summary report v1.pdf.The survey uses the #datafree Moya Messenger App on the #datafree biNu platform.