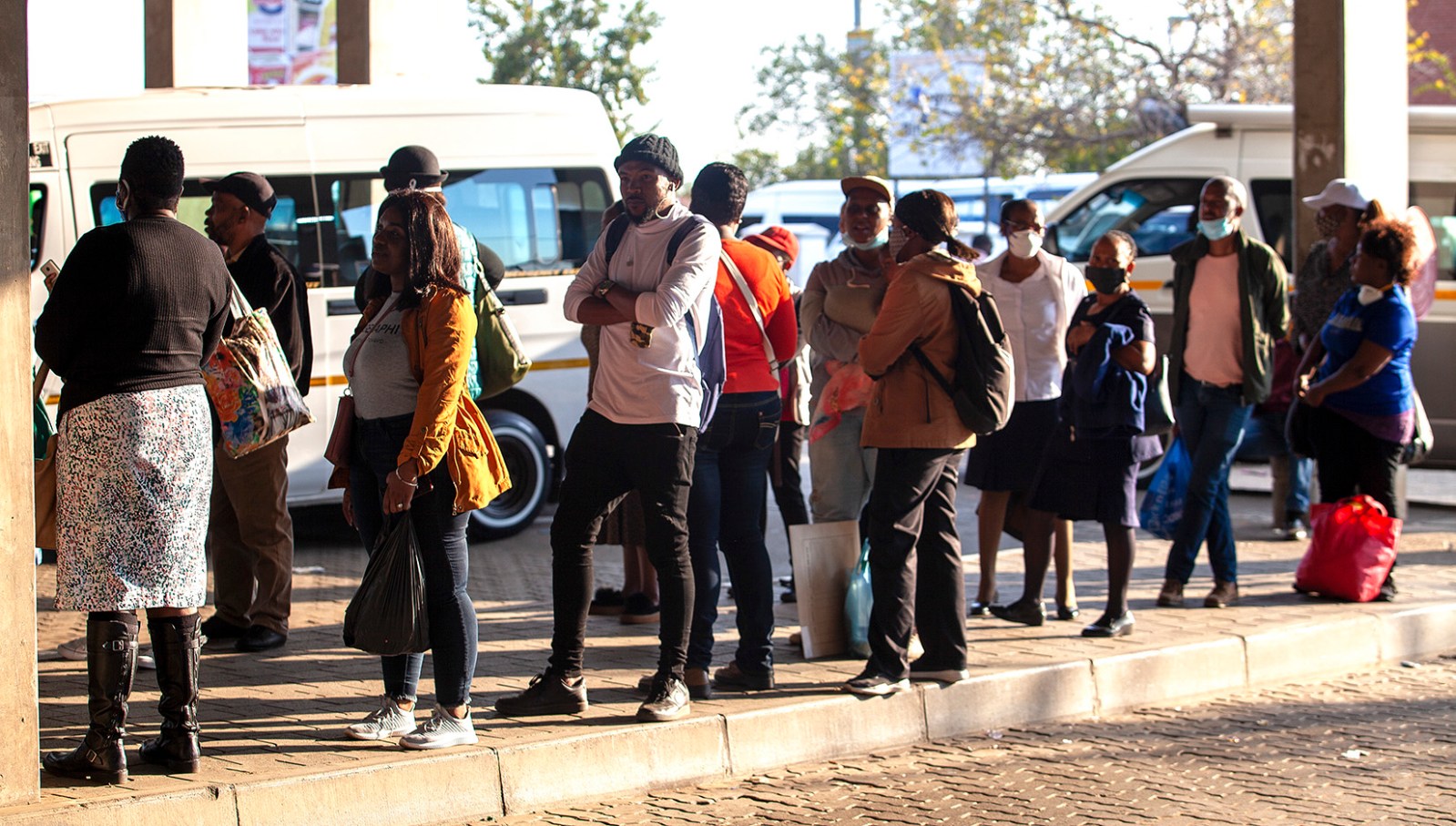 SOWETO, SOUTH AFRICA - MAY 04: A general view of commuters waiting in a queue at Bara Taxi Rank during lockdown level 4 on May 04, 2020 in Soweto, South Africa. According to media reports, about 1.5 million South Africans returned to work as government begins to lift a fraction of COVID-19 lockdown regulations. (Photo: Gallo Images/Papi Morake)

Stark contrasts emerging from the first days of Level 4 lockdown highlight the extreme disparities that form the foundations of South African society.

The economic consequences of the lockdown mirror entrenched inequalities of race, class and gender, and offer a reminder that financial stress and insecurity are grinding daily realities for most of those who live in South Africa.

However, the findings of Phase 1 of the University of Johannesburg-Human Sciences Research Council (UJ-HSRC) Covid-19 Democracy Survey show that, while the economic squeeze may be felt unevenly, everybody, irrespective of race, class or education, is very concerned about the financial situation facing South African society. This may be leading to greater cross-class support for policy interventions designed to protect the vulnerable.

It will be some time before the full economic impact of the Covid-19 pandemic is known, but the survey provides insights into its early impact on employment. Of those who had been working prior to lockdown, 18% had been retrenched, laid off or told ‘no work, no pay’. Twenty percent were able to work from home and 11%, while not working, were still receiving their salary, either partially or fully.

When these figures are broken down, disparities emerge. Half (50%) of those able to work from home were white, but only 35% were black Africans. Among the ‘working-from-homers’, 62% earn R20,000 a month or more, reflecting the reality that whites are more highly represented in professional positions.

Of those retrenched, laid off or receiving no pay during lockdown, the majority were black Africans – 69% compared to 10% who were white. Eighty-four percent of those in these categories earn R5,000 a month or less, highlighting the way entrenched inequalities of the labour market shape the financial impact of lockdown.

Class and race are important factors in shaping who has been struggling to pay their expenses. More than two-thirds (68%) of black African adults had difficulties, compared to slightly less than half (49%) of white adults. The latter figure still seems high.

Twenty-eight percent of people had been to bed hungry since the start of the lockdown. In response to a qualitative question, a black African woman, aged 18-24, from Polokwane, Limpopo explained: “Sometimes we go to bed with an empty stomach because my mother is not able to go out and do some piece job. Everything has stopped in life, it’s like we are sinking. Now we experience poverty worse than before lockdown. We depend on only one child social grant and its little, it cannot be able to feed six people.”

While more than two-thirds of those with incomes less than R5,000 a month were struggling to meet their expenses, this was also true for nearly a quarter of those with incomes over R40,000 a month. While life is much harder for those on lower incomes, the financial squeeze is being felt across income groups. Even some better-off people are struggling. For example, in the survey, a white woman, aged 45-54, from Muldersdrift, Gauteng wrote: “My husband’s company [is] suffering severely and Discovery is suspending us after my husband’s company paid Discovery late. All our debit orders bounced.”

Although direct experiences vary, there is a general anxiety about the financial impact of Covid-19 on society as a whole, with 77% saying that they are “very concerned”. When people were asked about the worst thing about lockdown, some expressed their concern for others. A white woman, 35-44 years, from Parkhurst, Gauteng wrote: “I worry about what it is doing to the economy, so many people are losing jobs and livelihoods and I believe the country will suffer hugely from this.”

High levels of unease are similar regardless of race or income. However, older people are particularly worried, with 92% of those aged 55 and over indicating they are “very concerned” about the “financial situation of all South Africans”.

In a previous article, we highlighted general backing for policy interventions to assist the poorest, with a particularly high level of support for food parcels and more than half supporting increased social grants. But the findings also demonstrated support for policies that go beyond measures that have been introduced, including establishing a basic income grant. This is in keeping with findings from the 2016 South African Social Attitudes Survey, which demonstrated that nearly two thirds (63%) supported the introduction of this grant.

While the R500-billion economic stimulus plan included measures to support the vulnerable, analysis of the package has revealed that a significant proportion, R130-billion, will come from reprioritising existing budgets. This will, in effect, take money from provinces and municipalities that was earmarked for housing, water and other basic infrastructure sorely needed in working-class communities. The survey provided respondents with an opportunity to send a message to the president. Many of these drew attention to existing failures in service delivery that compounded loathsome experiences of lockdown. Some examples:

Please provide us with water and sanitation, it has been six years since we last had water. Black African woman, aged 35-44, Umgungundlovu, KwaZulu-Natal.

Please help our community, our municipality doesn’t care. We don’t have electricity, water in our yards or even toilets. We do struggle a lot and it’s 6 years now. Black African woman, aged 25-34, Kanana, North West.

We don’t have food, toilets and we are suffering. We have to break the lockdown rules to look for these.­ Coloured woman, aged 25-34, Bloemendal, Eastern Cape.

Redistributing funds meant for municipalities is likely to have lasting consequences for service provision generally and, in particular, within impoverished communities, those most dependent on state support. Temporary relief provided by the stimulus package may, over time, deepen the fault lines of our unequal society. In contrast, findings from our survey reveal a widespread concern for inequality and support for radical measures that could address this problem. DM/MC

This is one of a series of articles based on the Covid-19 Democracy Survey conducted by researchers from Centre for Social Change (CSC) at the University of Johannesburg and the Developmental, Capable and Ethical State division (DCES) at the Human Sciences Research Council. The survey can be undertaken free of charge, by anybody in South Africa aged 18 or over with access to the internet. Go to:  https://hsrc.datafree.co/r/covidUJ. Results were weighted by race, age and education, making them broadly representative of the population. Phase 1 of the survey covers the days from 13-18 April, Phase 2 from 18-27 April, and Phase 3 from 27 April onwards. See: https://www.uj.ac.za/newandevents/Documents/UJ HSRC summary report v1.pdf