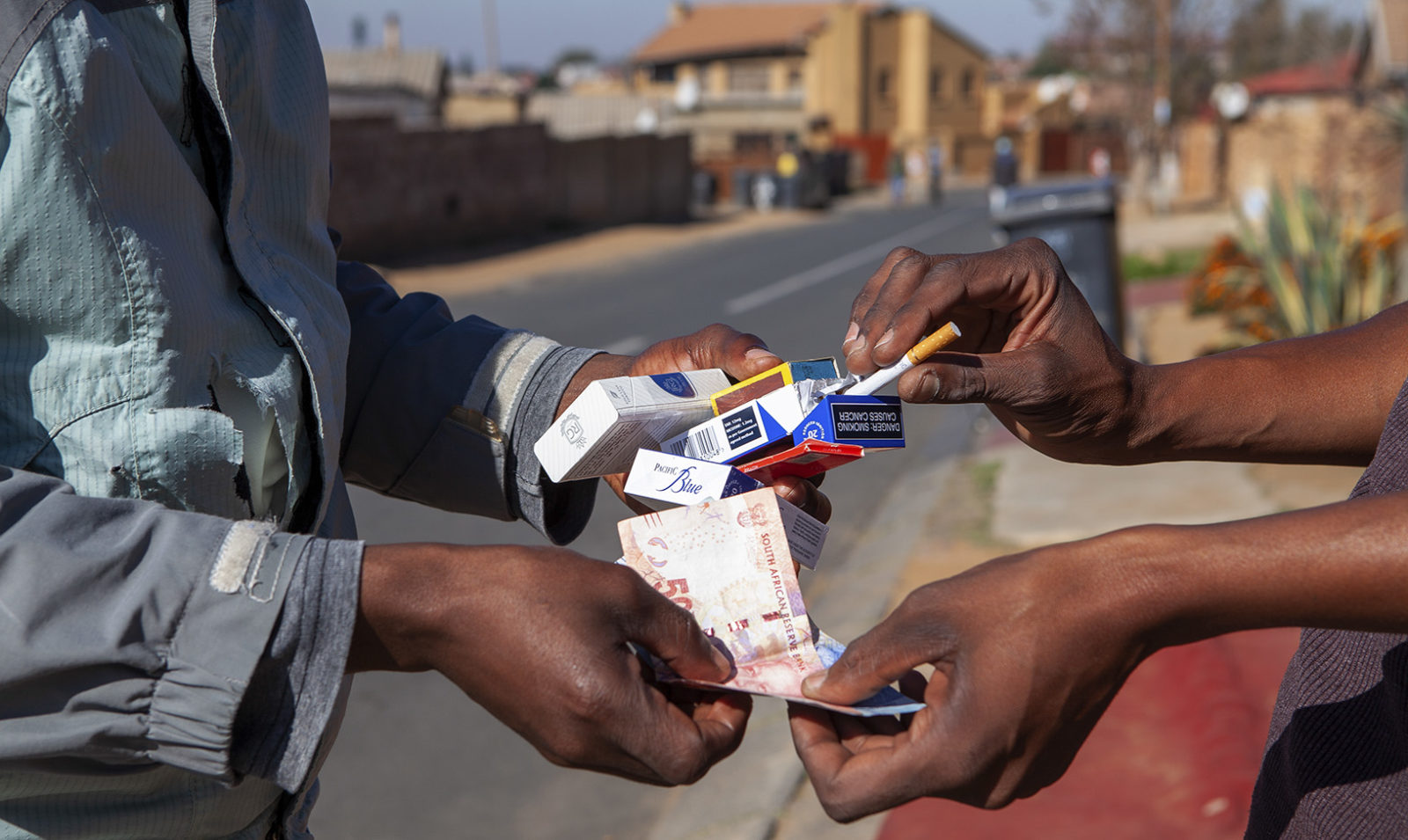 JOHANNEBBURG, SOUTH AFRICA - MAY 11: A general view of people allegedly buying and selling cigarettes illegally during lockdown level 4 on May 11, 2020 in Johannesburg, South Africa. It is reported that police had chalked up close to 200,000 lockdown infringements, including fines, arrests and warnings. Many of those arrested were people buying, selling and transporting cigarettes during the lockdown. (Photo: Gallo Images/Papi Morake)

There has been a shift in opinion towards lifting the ban on cigarettes. This is revealed in new findings from the UJ/HSRC Covid-19 Democracy Survey.

Thus far, the South African courts have sided with the government when it comes to banning the sale of cigarettes. But there is cynicism about the advantages of its stance, and the matter is about to be reviewed.

Lockdown regulations and the ban on tobacco products

Under Section 27(2) of the Disaster Management Act, the Minister of Cooperative Governance and Traditional Affairs, currently Dr Nkosozana Dlamini Zuma, is empowered to make regulations concerning the movement of persons and goods. Under lockdown amendments published on 25 March 2020, only businesses involved in the provision of essential goods and services were permitted to operate during the first phase of the lockdown, Level 5. Tobacco products, including cigarettes, were not regarded as “essential”, so banned.

On 25 April 2020, the minister briefed the media regarding the implementation of the Risk Based Model for Economic Activity, and advised South Africans to submit inputs for consideration. A “draft framework for consultation”, made available at the end of April, proposed that the ban on tobacco products be lifted. However, when the Minister promulgated the Level 4 regulations on 29 April she omitted tobacco products from the list of “permitted” goods. There had been an about-turn, and the ban remained in place. On 28 May 2020, with the promulgation of Level 3, regulation 45 declared: “the sale of tobacco, tobacco products, e-cigarettes and related products is prohibited, except for export”.

“The exercise of public power has to be rational.  In a constitutional state arbitrariness or the exercise of public power on the basis of naked preferences cannot pass muster. Judgments of this Court suggest that, objectively viewed, a link is required between the means adopted by the legislature and the end sought to be achieved. The fact that rationality is an important requirement for the exercise of power in a constitutional state does not mean that a court may take over the function of government to formulate and implement policy. If more ways than one are available to deal with a problem or achieve an objective through legislation, any preference which a court has is immaterial.”

The court held that the minister had “a firm rational basis” to include the prohibition of cigarettes in regulations designed to help curb the spread of the coronavirus.

Mounting support for lifting the ban

However, a large and growing minority of South Africans are unconvinced by the court’s conclusion. This is evident when comparing findings from Round 1 of our survey (13 April to 11 May 2020) with those from the first phase of Round 2 (3 July to 17 July). Data comes from an online questionnaire, with results weighted by race, age and education, making them broadly representative of the adult population.

The first round of the survey showed that only a fifth (20%) of adults supported lifting the ban. Since then, the figure has increased, to the extent that almost a third (31%) wanted the ban on sale of tobacco products to be lifted. Unfortunately, we do not know whether the remaining 69% are opposed to removing the ban, or indifferent, or just do not know.

Our survey asked 13 questions about policy options. The one on tobacco products recorded the largest percentage-point increase. The share favouring the suspension of the ban is greater than the 20% who currently use tobacco products.  The National Income Dynamics Study, a project of the South African Labour and Development Research Unit at the University of Cape Town conducted  the fifth round of this panel survey in 2017, when about 24,000 adults in South Africa were surveyed. It found that 35.7% of men and 8.1% of women older than 18 smoked cigarettes.

In comparison with the case of tobacco, support for alcohol sales rose more modestly from 12% to 16% (a rise of 4 percentage points) between our survey rounds. The implication is that support for lifting the tobacco ban now stands at around double that of the support for the removal of the alcohol ban.

The changing basis of support for the ban suspension

While we find increasing support for lifting the ban across a range of socio-economic attributes, the level of increase has been greater for some relative to others, producing clear gradients of variation in support. While men and women feel equally strongly about the issue, support for scrapping the ban increases with age. Whereas, only about one in four (25%) of those in the 18 to 24 years group want restrictions lifted, the figure rises to almost half (46%) with people aged 55 and older.

These views emerge as British American Tobacco SA (BATSA) prepares to challenge the government in the Western Cape High Court. BATSA claims that R35-million in tobacco excise taxes is being lost to the National Treasury each day. Additionally, the jobs of 8,000 tobacco farm workers are vulnerable, and the sale of illicit cigarettes is rampant.

Antipathy to the current regulations increases with level of income. It is lowest (24%) among people earning between R2,500 and R5,000 per month and highest (62%) for those with a personal monthly income above R20,000. This suggests a notable class effect informing patterns of support for suspension of the tobacco ban, which is reinforced by the stronger than average support found in suburban areas.

These trends indicate a hardening of attitudes among a sector of the population that was initially very willing to sacrifice some rights in order to fight the pandemic. Round 1 showed that older and wealthier people were significantly more prepared to sacrifice key rights, such as privacy, travel, attendance at religious meetings, or school attendance for their children, than were younger or less wealthy South Africans.

Opposition to the ban on selling tobacco products is more prevalent among white (78%), coloured (59%) and Indian (40%) adults than among black Africans (19%). There is also a strong party-political dimension, with ANC supporters being far less likely (15%) to want the ban to be lifted, than those who said they would vote EFF (25%), DA (62%) or “another party” (42%) if an election were to be held. 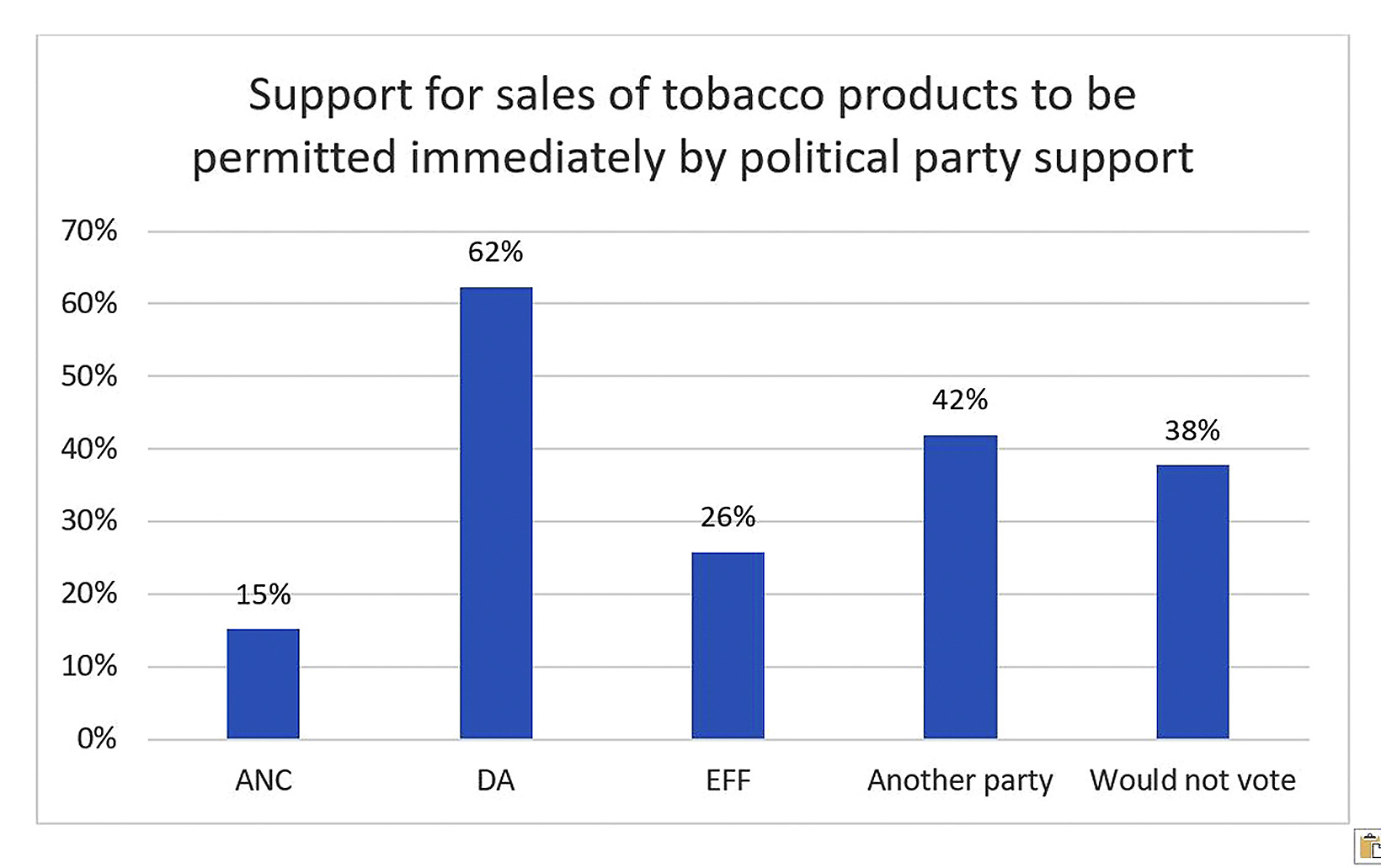 BATSA, which sells Peter Stuyvesant and Dunhill cigarettes, says it has a 78% share of the legal market. It initiated legal proceedings alongside Japan Tobacco, which will be heard later this week. BATSA is arguing that prohibition on the sale of cigarettes and other tobacco products is unconstitutional and infringes on the right to dignity (Section 10 of the Constitution) which they argue extends to autonomy and the ability to make choices. The group also argues that the ban violates the right to privacy, the right to bodily and psychological integrity, and the rights of tobacconists and tobacco farmers to practise their trade. DM/MC

Findings come from responses to a questionnaire hosted by the #datafree Moya Messenger app on the #datafree biNu platform. It can be seen and completed at https://hsrc.datafree.co/r/ujhsrc. The researchers will be downloading data and publishing further findings. This makes it possible to discern trends in people’s experiences and opinions about Covid and lockdown. Readers are invited to complete the questionnaire.

A summary of the survey’s Round 1 findings and a fuller explanation of methodology can be found  here.

Earlier articles based on the survey data have been published in Daily Maverick.