Cape Town Together, a neighbourhood-based network of 170 community action groups 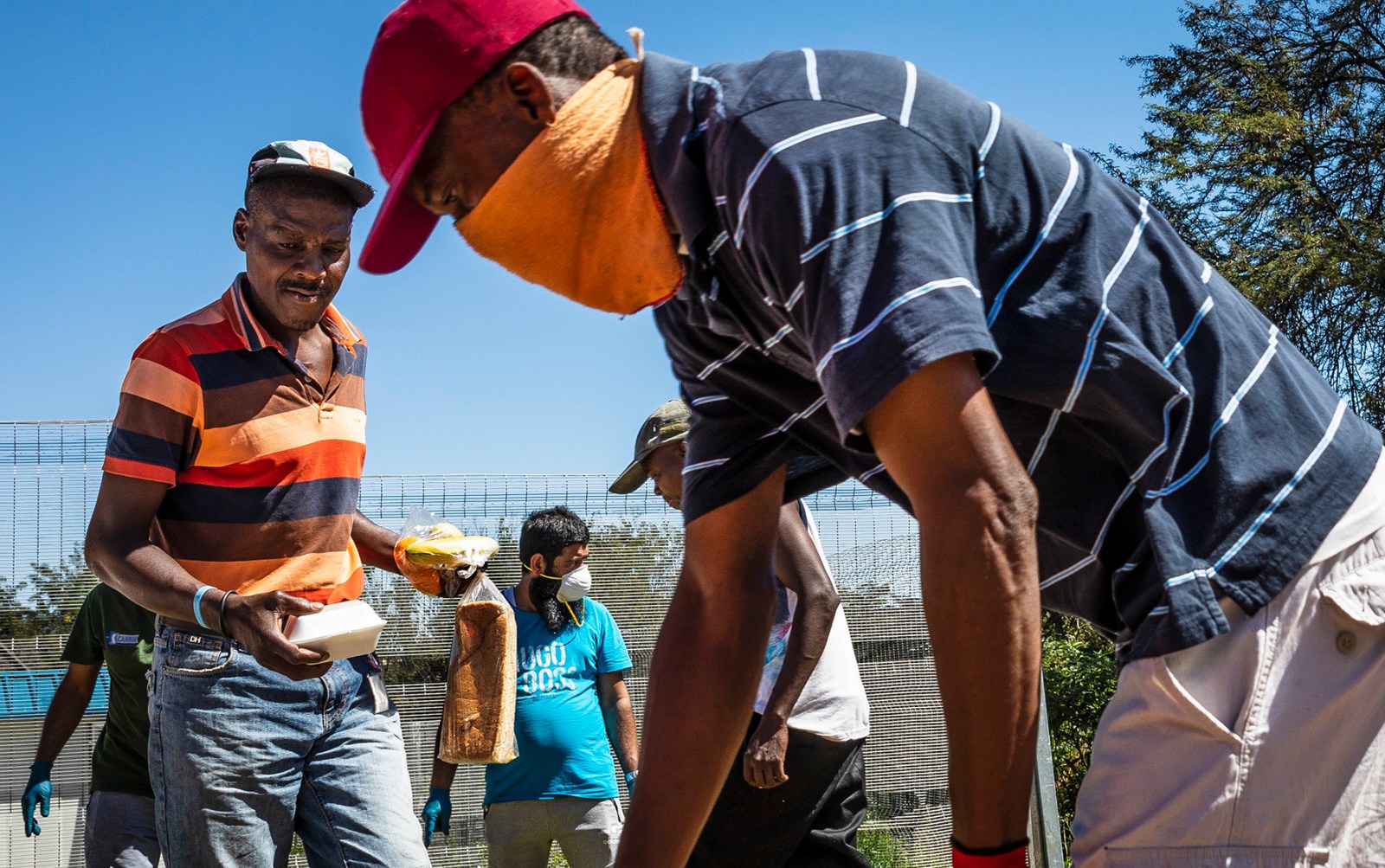 Although they began as a rapid response to Covid-19, many CANs are starting to grapple with how to build back better, say the writers. (Photo: EPA-EFE / Kim Ludbrook)

Instead of seeing threats to their political agendas, Cape Town’s mayor and ward councillors should rather explore the possibilities for collaboration and cooperation with local Community Action Networks to build the city ‘back better’ in the wake of the pandemic.

What is Cape Town Together?

Cape Town Together (CTT) is a network of self-organising neighbourhood-based teams engaged in rapid, community-led responses to Covid-19. It is not a formal organisation or nongovernmental organisation (NGO) and is not aligned to any political party. The network is made up of thousands of people across the city working together to meet the challenges we see in our communities. These neighbourhood hubs are called Community Action Networks (CANs).

Some of us are organisers, some are carers, some have worked in outbreak situations before and some are new to organising in this way. What unites us is that we are all responding to the long-standing health and socioeconomic crises that Covid-19 has exposed and exacerbated in our city.

Although they began as a rapid response to Covid-19, many CANs are starting to grapple with how to build back better, recognising that going back to a pre-Covid “normal” is not a goal we should aspire to, because there was nothing “normal” about the world before Covid-19. In fact, going “back to normal” is one of the worst things that could happen. Instead, we want to move forward by building a better society that is more socially and environmentally just.

The work that we do

Over the last five months, 170 CANs have been set up. There is no “one size fits all”, as every neighbourhood is different. Some CANs have set up mask-making and distribution schemes. Others have opened community kitchens that provide hot meals to thousands of people every day, while also being sites for communicating and demonstrating Covid-safe practices, including handwashing, mask-wearing and physical distancing.

Some CANs have found creative ways to address homelessness in their neighbourhoods by collaborating with NGOs and church groups to secure temporary accommodation, and connecting homeless people to employment opportunities. Other CANs have established community care centres for Covid-positive people who are low risk and do not need medical care, but do need a safe, nearby space to self-isolate away from their more vulnerable family members.

Simultaneously, CANs have organised community clean-ups, started food gardens, collected clothing and household items for those affected by evictions and flooding, assisted school children with home-based learning, and put together baby bundles for new mothers sheltering at home at the height of the pandemic.

All of this is important, valuable work. Being a part of a CAN is an opportunity to be part of building and creating something together. The CANs have provided hope, inspiration and solidarity at a time when South Africa’s future looked its darkest. Together we have demonstrated the power of collective action – action that will be invaluable in dealing with future pandemics and natural or economic disasters.

All of this has been achieved without any formal support from big donors or the state. Our flexible and flat structure meant that we were able to mobilise with incredible speed despite lockdown restrictions. When formal social welfare schemes were slow to be rolled out, insufficient and difficult to access, the CANs and other civil society bodies were able to mobilise immediately to step into the vacuum.

When people had no money to buy food, and hunger was a more immediate threat than Covid, the CANs got to work. CAN volunteers from across the city found creative ways to resource their efforts from within their CANs and through solidarity between CANs.

This flexibility is our strength. Anybody can join their local CAN, and every CAN decides its own course of action and way of working, and makes decisions about which NGOs, government officials, religious organisations or civil society groups to collaborate with. In fact, many CAN members also work for local NGOs, are members of religious organisations, or work in government. This allows the CANs to act as community-based hubs, with the flexibility to do whatever is not being done by more formal actors.

While each CAN is different, and all focus on specific needs in their neighbourhoods, many CANs have worked alongside, and in support of the state’s Covid-19 response programmes. Some CANs have built important, mutually valuable relationships with the state (for example, presenting to hotspot teams, or working with community-based teams, and local ward councillors).

In the early days of the pandemic, when information and education about the virus and important preventative behaviour changes were of the highest priority, the CANs acted as distribution networks for official guidance. CAN members distributed pamphlets to their neighbours at spaza shops and taxi ranks. Community kitchens put up Department of Health posters and adapted these into accessible infographics, quickly becoming hubs for information sharing and demonstration of Covid-safe practices that make sense in resource-scarce settings.

There have been multiple touchpoints between CANs and public servants. There were multiple public co-learning or consultative sessions with CANs and government officials in the early days of the response, including the Premier of the Western Cape, Alan Winde and the head of the Department of Health, Dr Keith Cloete.

However, despite these promising connections, most CANs have received little to no support from the state. CANs have been unable to access local public infrastructure during this public health emergency. Some CANs have tried, in vain, to get permission to use local municipal halls for their activities. Others have requested permission to use community halls for community care centres and been denied. These are all public facilities that should be made available for the public good, especially during a crisis.

The current spat between a Bonteheuwel ward councillor and the Bonteheuwel Joint Peace Forum CAN arose because the CAN was granted permission by the facility manager to use a rundown public building for a community care centre, in exchange for a monthly rental. Despite the CAN having already begun major renovations using its own resources and fundraising to make the facility usable, the project is sadly currently on hold.

Work that is deeply political

For all our efforts to work alongside and in support of government programmes and build meaningful relationships with public servants, trying to avoid party politics has been a constant challenge.

Cape Town Together is a non-partisan, non-religious and vigorously independent network not beholden to any political party, donor or organisation. While we continually resist the distraction of party politics, the work we do is, of course, deeply political. As one CAN member put it, in the context of extreme hunger and poverty, “every loaf of bread is political”.

In recent weeks, political actors have accused the CAN network of being an NGO that is misleading well-meaning citizens, of encouraging community members to break the law, and of having an opaque, subversive political agenda.

In part, these accusations are a response to some CANs working with civil society organisations to legally contest the unlawful eviction of residents in Empolweni – and ignores that fact that the Western Cape High Court found against the City and in favour of the residents.

In addition, the decentralised, self-organising nature of Cape Town Together means that there is no way to “steer” the network towards any particular agenda. The network is steered by the needs that emerge, and the CANs are accountable only to their own communities.

The recent misrepresentation not only reflects a misunderstanding of the nature of the network, but also positions the thousands of CAN members leading social and welfare projects in their own neighbourhoods as passive and powerless victims of an opaque and coordinated political agenda.

There is great scope for a multiplication of energies, efforts and resources and we invite ward councillors, City officials or any other interested person to meet with their local CAN to explore possibilities for generative collaboration.

The mayor and ward councillors who have regrettably misinterpreted the values, orientation and ways of working of Cape Town Together need to ask themselves why the prospect of hyper-local organising and decision-making in response to Covid-19 and other socioeconomic challenges constitutes such a threat to their political agenda. DM/MC

From Cape Town Together: