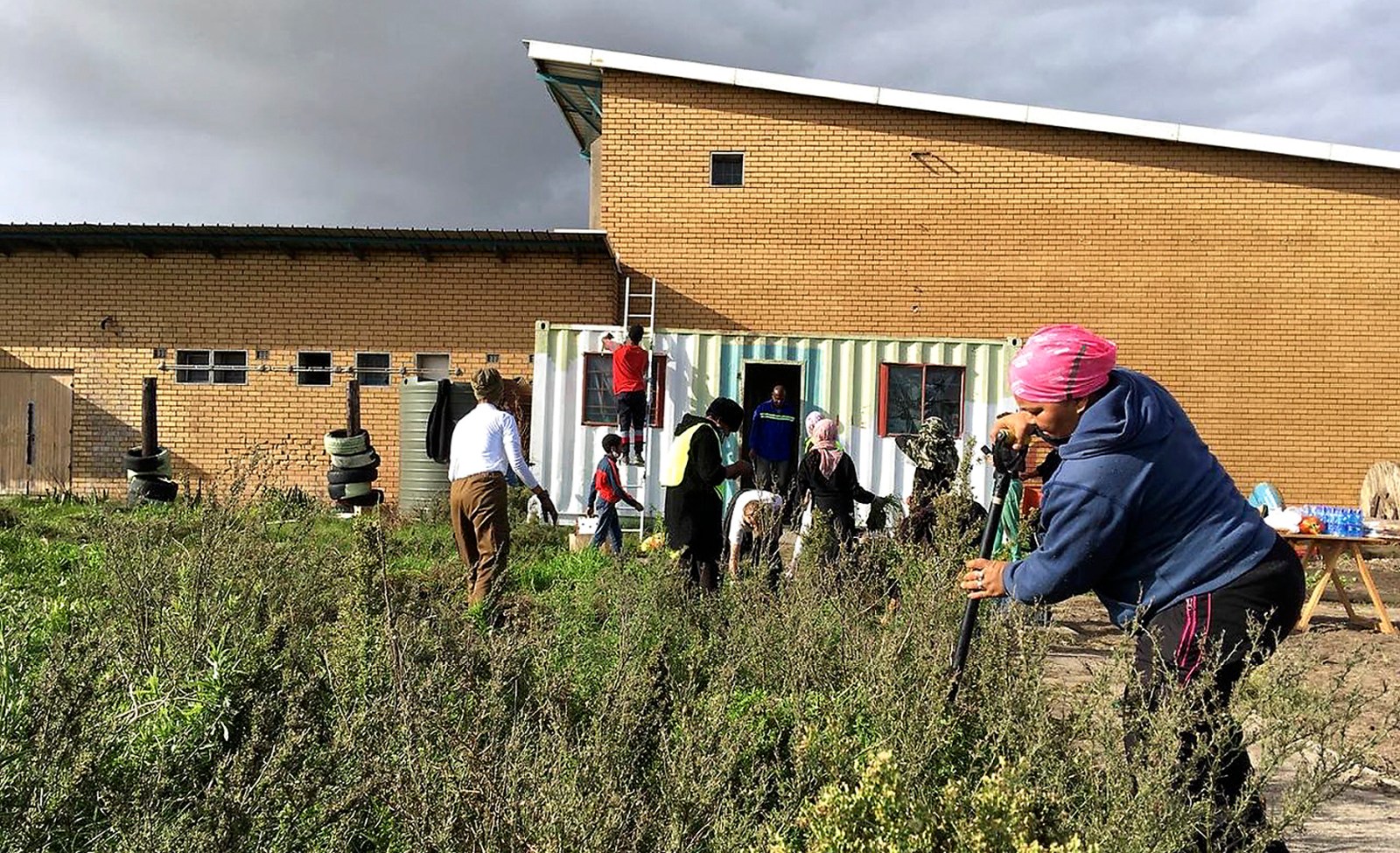 Weeding the garden and repainting the container at the Bonteheuwel Multipurpose Community Centre. (Photo: Caelem Hendricks)

The Bonteheuwel community centre was always a vibrant home to community groups – until it fell into disrepair during lockdown. Now, combined efforts to revive the centre as a Covid-19 self-isolation site are finally bearing fruit. But not everyone is happy.

The multipurpose community centre (MPC) in Bonteheuwel is a government-owned facility in the heart of the working class suburb. It was always a vibrant community hub hosting community meetings, weddings, karate and dance classes, church services and weekly Alcoholics Anonymous meetings.

However, when lockdown forced the centre to close, vandals moved in. Wiring was pulled out, doors were ripped from their hinges and windows were smashed. The outdoor space became overgrown with weeds and littered with household trash. No attempt was made to clean up or repair the damage. In this condition, the centre could no longer be used.

It was at this point that the Bonteheuwel-Joint Peace Forum Community Action Network (BH-JPF CAN) approached the centre’s management for permission to restore the MPC and its grounds. The intention was to repurpose the facility as a community-run care centre for people suffering with Covid-19 who lacked the space to safely isolate at home.

The BH-JPF CAN is a community initiative that for the past five months has been providing vital Covid-19 relief in a suburb that is badly affected by poverty and crime.

The CAN is not a formal organisation, but rather an inclusive collective of residents tackling local issues together. As a part of the Cape Town Together Network, the BH-JPF CAN is partnered with the Rondebosch CAN which supports their initiatives wherever possible. The BH-JPF CAN has been a symbol of hope to those struggling with the social and economic consequences of the pandemic. Its efforts include maintaining a network of 46 community kitchens throughout the lockdown period.

The centre’s manager told BH-JPF CAN that it would not be used for public or community events during lockdown, and was therefore available for use as a community care centre (CCC).

In May, an agreement was signed between the manager and BH-JPF CAN, in which a rental amount was stipulated. Shortly afterwards, on 24 June, the manager notified community groups to collect any property they’d left behind at the facility before lockdown, so that it could be used as an isolation space during the pandemic.

Over the past two months, the BH-JPF CAN, with the support of the Rondebosch CAN and members of other CANs across Cape Town, have begun restoring the MPC. They’ve been hard at work raising money for building supplies, imploring local construction and repair companies to donate their time and expertise, and calling on nearby CANs to join in the clean-up effort.

The hard work has paid off. Today, thanks to the BH-JPF CAN and others, the centre has been returned to the welcoming space it always was.

Vandals can no longer gain access to the premises. The electrics and plumbing are being repaired, and the community vegetable garden is thriving once again. Broken windows have been replaced, ceiling boards repaired, and the hall, kitchen and security area repainted.

Now, just days away from welcoming the first ‘resident’ to the Bonteheuwel community care centre, the BH-JPF CAN has hit a stumbling block.

The group has angered DA ward councillor, Angus McKenzie. He says the CAN’s use of the centre is illegal and that it’s “an ANC project”.

A series of posts on Facebook and circulated on WhatsApp groups state that:

“The Rondebosch CAN/JPF attempted to hijack a government facility that does not belong to them, effectively leaving various other organisations, churches and sporting groups on the street.”

This is a gross misrepresentation for a number of reasons, not least of which is the fact that none of the community groups was using the facility due to lockdown and the centre’s state of disrepair. In addition, the facility has not been “hijacked” since the BH-JPF CAN has an agreement with the centre’s manager and is paying a monthly rental.

The social media post also claims that the BH-JPF CAN is affiliated with the ANC. This is quite simply not true. Neither the BH-JPF CAN, nor the Rondebosch CAN, is politically affiliated. Cape Town Together is a network of self-organising CANs engaged in rapid, community-led responses to Covid-19: it is not a formal organisation and is not aligned to any political party.

The truth is that the Bonteheuwel community centre was always a vibrant home to many community groups, and was only interrupted by Covid-19 and the lockdown. It became impossible to use the indoor facility for community activities, religious meetings and recreational purposes.

In a time of crisis, such facilities must be used as part of a comprehensive, multi-sectoral Covid-19 response that meets the most pressing needs of local communities.

One of these urgent needs is a safe space near to people’s homes, where loved ones can drop off food and clothes, and where Covid-19 positive folks can self-isolate while being cared for by those from their own community.

BH-JPF CAN is also part of the Cape Town Together Health CAN in which a group of medical doctors, public health specialists and CAN members are supporting CANs to set up community care centres for those needing a local space to self-isolate.

The model has been successfully implemented in Ocean View near Kommetjie, where the Ocean View CAN has established a community care centre with the support of local residents and health workers.

There, the centre provides “home-away-from-home” care to residents needing somewhere to safely self-isolate while recovering from Covid-19. One of their most recent residents was a woman who shared her home with 10 other family members, some of whom are high risk. She did not want to leave her neighbourhood for a far-off government quarantine facility, but was unable to self-isolate at home. At the Ocean View centre, she received care and support from local volunteers until she was no longer infectious.

The BH-JPF CAN is a well-respected community organisation within Bonteheuwel, and the work of the JPF is trusted by many. Since the negative social media messages emerged, statements of support for the BH-JPF CAN have flooded in from organisations including Bonteheuwel Churches in Action, Bonteheuwel Legacy Arts Cooperative, Apostolic Church of Christ, Bridgehouse, Bonteheuwel Crime Alerts, La-Bon Foundation, 3rd Bonteheuwel Scouts and Communitree SA.

This tension between ward councillor McKenzie and the CAN comes at a time when CANs across the city are exhausted from months of doing the work that should be done by elected officials.

What the CANs do is hard work; it is a daily toil of love, empathy and radical generosity, largely from the side of women. Their efforts receive very little support, and are often met by opposition from those who see community organising as a threat to their power.

Nadia Mayman is a Bonteheuwel-based community activist, media liaison for Bonteheuwel Joint Peace Forum, admin for the Bonteheuwel CAN, Chairperson of the Bonteheuwel Ratepayers and Tenants Association and deputy Chair for the Community Policing Forum Sector. Eleanor Whyle is a public health researcher, PhD candidate in the Health Policy and Systems Division, University of Cape Town, and a member of the Cape Town Together Health CAN. Aimee Hare has been a Rondebosch resident for many years and is the current admin for the Rondebosch CAN. Dr Ghadija Hayat is a health activist, medical doctor and member of the Cape Town Together Health CAN.