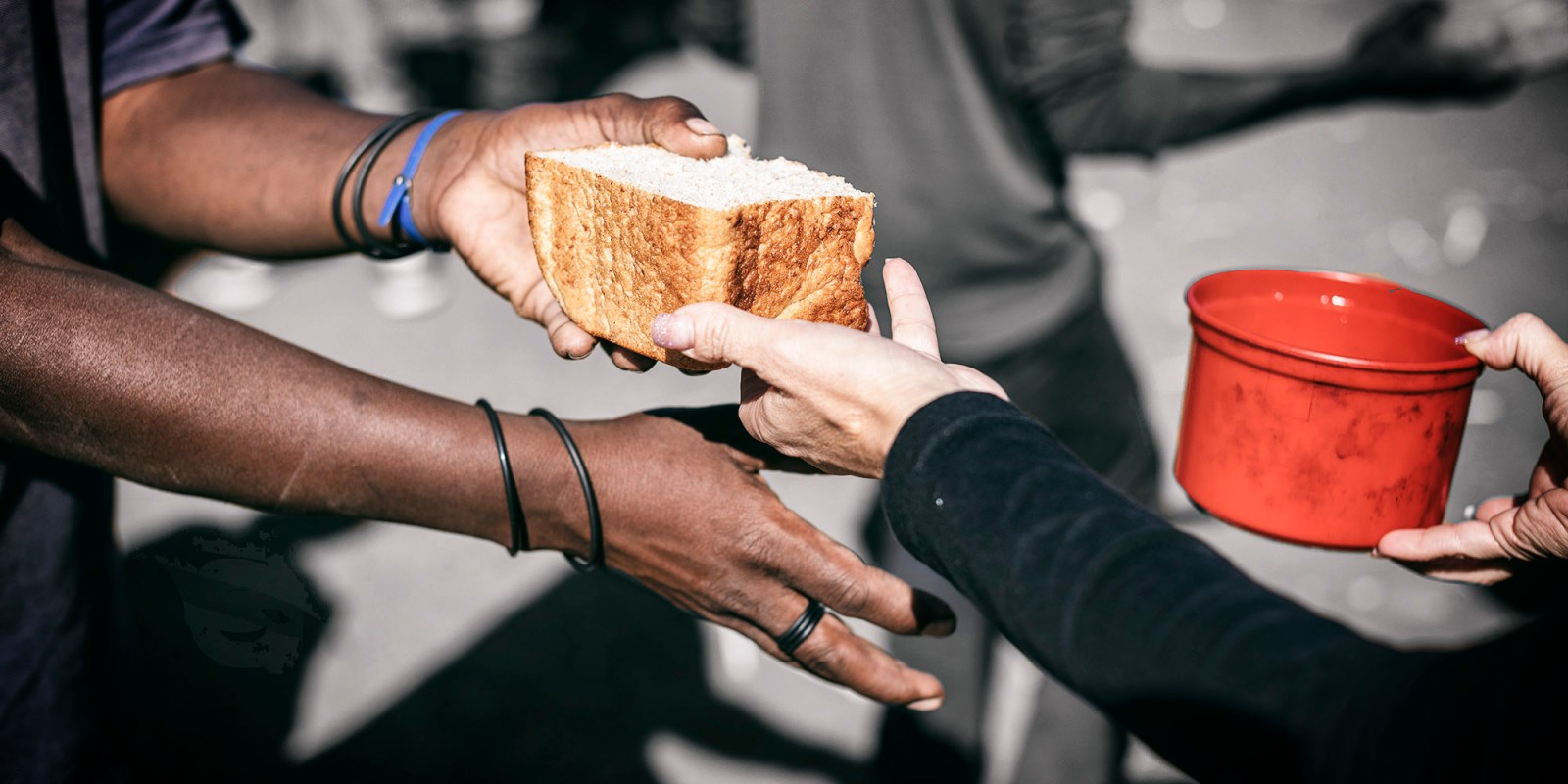 A resident gets bread and soup during a food handout by the Hennops River Revival NGO in Pretoria at a trash recycling area on day 61 of the national lockdown. (Photo: EPA-EFE / Kim Ludbrook)

A bungled Sassa tender left confused service providers with warehouses full of food while also failing thousands of hungry South Africans. From November 2019 to the end of March 2020, Sassa delivered zero food parcels in six provinces despite the fact that, according to the State of Food Security report 2019, almost a third of South Africans experience severe food insecurity, which means the household has either run out of food or in some cases, has gone days without eating a single meal.

When the government slammed the brakes on the economy to give the country a fighting chance against the Covid-19 pandemic, the safety nets to help families who had lost their only forms of income, and the awaited social grants, were not in place.

Other government departments, the Solidarity Fund and nonprofits had to step in.

But this did not have to be the case if it were not for the red tape surrounding a cancelled tender in August 2019 that led to a delay in the South African Social Security Agency (Sassa) appointing service providers to supply and distribute what it calls social relief of distress (SRD).

SRDs are food parcels and food vouchers supplied to people facing unexpected hardship where indigent families have lost a breadwinner, or are awaiting payment of an approved social grant, or are victims of a disaster.

Although many of the applicants for the Sassa food parcels are self-referrals, the agency works with the departments of health and education and nonprofits to identify households which require assistance.

From November 2019 to the end of March 2020, Sassa delivered zero food parcels in six provinces despite the fact that, according to the State of Food Security report 2019, almost a third of South Africans experience severe food insecurity, which means the household has either run out of food or in some cases, has gone days without eating a single meal.

To make matters worse, service providers appointed in 2016 whose contracts had ended in November 2019 told amaBhungane that they sat with millions of rands worth of food parcels in their warehouses because of uncertainty about their contracts being extended.

By August 2019, Sassa should have appointed new service providers to supply SRDs for the Eastern Cape, KwaZulu-Natal, Gauteng, Limpopo, Mpumalanga and the Western Cape.

But that did not happen.

However, the tender was cancelled after the bid adjudication committee identified a technical hitch.

Bidders had been asked to extend the validity of their bids. Those who did not were automatically excluded, but there was a problem with how this was done.

“Prospective bidders were not given a reasonable time to respond, resulting with [some] bidders not having seen the emails to respond before the expiry date of the validity of the tender,” Dumisile Ndlovu, the Sassa general manager of supply chain management, wrote in response to questions from amaBhungane.

Ndlovu said Sassa was advised by National Treasury to cancel the tender as the exclusions might have been unfair. She did not respond to questions about when the problem was picked up and why excluded bidders were not simply asked once more about extending the validity of their bids.

Faced with having to reissue the tender, Sassa approached service providers coming to the end of their 2016 three-year contracts and asked them to extend their service by three months until November 2019.

But by December 2019, Sassa had still not finalised the new tender and it was only readvertised on 17 January 2020.

Some of the 2016 service providers anticipated that their contracts would have to be rolled over again to fill the gap.

In the confusion, some took on new leases for warehouses and retained stockpiles of food, not knowing that Treasury had told Sassa that it could not extend the old contracts beyond the end of 2019.

Now, these service providers are frustrated that the costs they incurred to meet Sassa’s needs have gone to waste.

In the interim, Sassa requested approval from Treasury for a bid deviation to source quotations from service providers that passed a functionality assessment in the cancelled 2019 bid.

Sassa proposed to contract them for six months while running the new tender.

Approval was granted, but the appointment of service providers was eventually concluded in April 2020 for a period of three months ending in June 2020.

Of the temporarily appointed service providers, only two remained from the 2016 cohort.

Two others of the 2016 cohort have since written to Treasury querying the deviation and asking why Sassa did not give them 30 days’ notice to end their contracts.

Sassa told amaBhungane that it did not have to give notice: “A contractual relationship automatically ends at the end of the stipulated contract.”

Sassa added that it was in the process of awarding the next round of SRD bids for the upcoming three-year cycle.

The impact of the bungling is clear from Sassa’s own figures.

In the face of the Covid-19 pandemic, Sassa extended eligibility for food parcel provision to child-headed households as well as to those dependent on other relief programmes which were shuttered during the lockdown, such as the National School Nutrition Programme.

The department of environment, forestry and fisheries supplied 1,500 food parcels.

Of the total food parcels delivered by 25 May 2020, Sassa’s contribution amounted to a measly 9%.

Together, the initiatives have fed over 3.1-million people, the department of social development told Parliament in May 2020, where one food parcel is estimated to feed four people, but this excludes donations and contributions made by various nonprofits acting independently of the department.

Sassa admitted that it had not contracted any service providers for the first three months of 2020, but denied there was a food parcel shortage.

“I would not say there was [a] shortage, but unprecedented high demand [was] given birth to by the national disaster, and the fact that the Sassa’s offices had to lock down and therefore [the] processing of grants application was delayed increasing the demand for immediate relief of distress,” Ndlovu said.

“Issuing of food parcels is dependent on the budget and applicants meeting the eligibility criteria. The allocated budget for the 2020/21 is R407-million and the agency can only provide assistance limited to available budget allocation.” DM

*The amaBhungane Centre for Investigative Journalism, an independent non-profit, produced this story. Like it?  Be an amaB Supporter to help us do more. Sign up for our newsletter to get more.