Nathi Nhleko’s world: Tree of Origin trumps democratic law — and whose laws are these anyway? 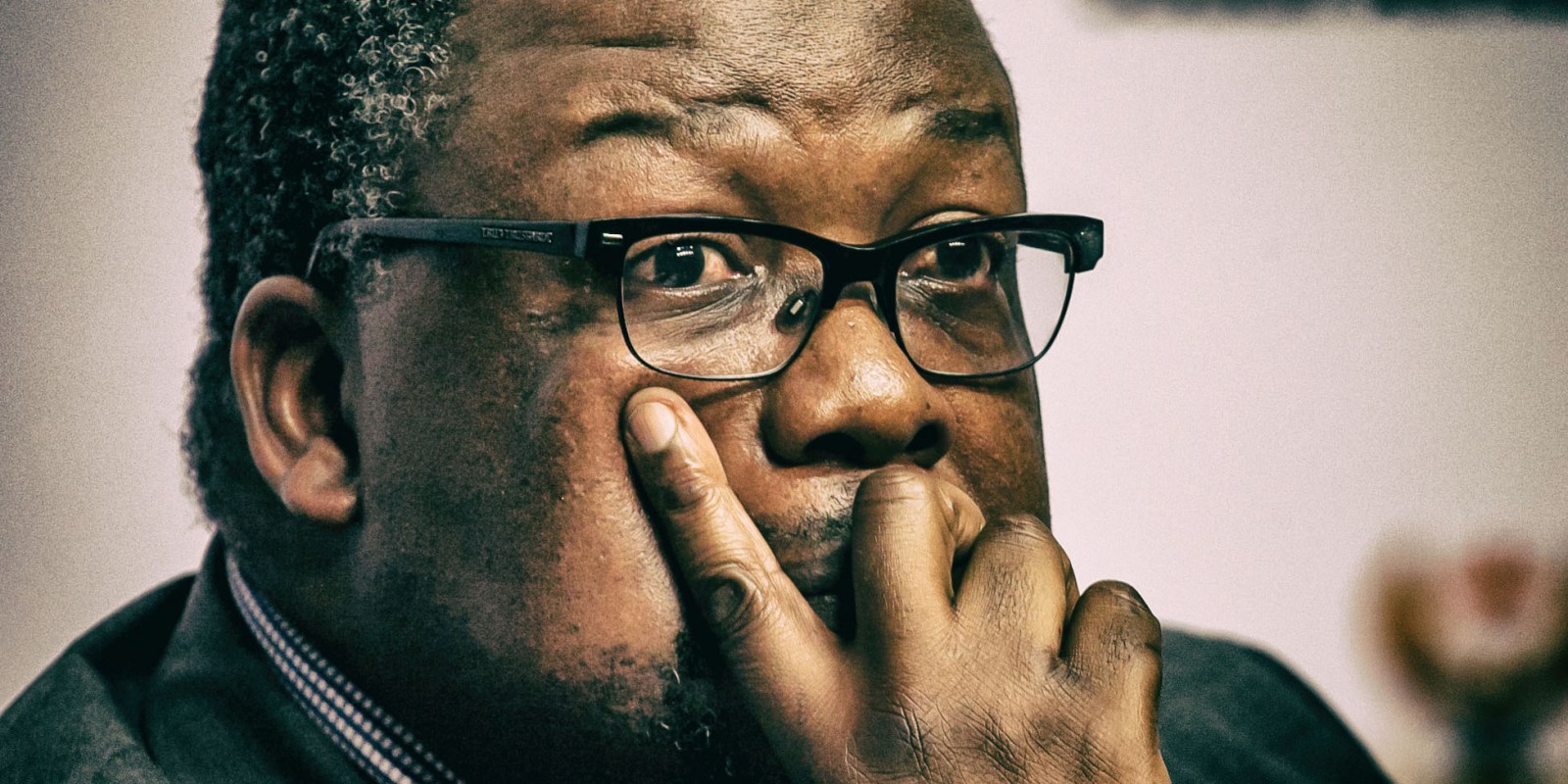 Nhleko appeared before the Zondo commission to give evidence after being implicated by several witnesses in the capture of the law enforcement cluster during his term as minister of police in Jacob Zuma’s Cabinet between 2014 and 2017.

The carving up of the African continent by colonial powers in Berlin in 1884 is to blame for the failure to give South African citizenship to a Zimbabwean-born convicted fraudster appointed to the sensitive position of chief of staff to former minister of police Nathi Nhleko.

This, more or less, was Nhleko’s argument to the Zondo Commission of Inquiry into State Capture on Monday 27 July justifying his appointment of Leon Abednigo Mbangwa in 2015.

In terms of commissions of inquiry’s greatest hits, Nhleko’s argument is up there along with SARS IT head Mmamathe Makhekhe-Mokhuane’s reference in 2018 to the Drakensberg Boys’ Choir during testimony to the Nugent Commission of Inquiry into SARS.

“The Drakensberg Choir was established in 1967, and it is a boys’ choir, if I may say that,” she responded to a question about long-term SARS employees.

Nhleko appeared before the commission to give evidence after being implicated by several witnesses in the capture of the law enforcement cluster during his term as minister of police in Jacob Zuma’s Cabinet between 2014 and 2017.

Nhleko, of course, will be remembered for his performance in Parliament – to the accompaniment of an opera score and video – justifying the building of a “fire pool”, among other upgrades, to Zuma’s home at Nkandla.

The real brutality of Nkandla

He was responding on Monday to damning testimony given to the commission by former IPID executive director Robert McBride and IPID investigators Matthews Sesoko and Innocent Kuba in 2019.

Regarding the “transfer” of Mbangwa, the former minister said he had not been prompted to check up on Mbangwa’s CV or criminal record as Mbangwa had “worked for government for over 20 years” in various senior capacities.

That is, of course, apart from a stint in Pretoria Central Prison where he served 18 months of a 36-month sentence related to ID fraud.

On his release in August 2004, Mbangwa was, said Nhleko, “given a letter” and told (Nhleko did not disclose by whom) to apply for South African citizenship by descent.

Mbangwa had “taken steps to rectify his citizenship” but, said Nhleko, the Department of Home Affairs “was not forthcoming”, despite an order by the Pietermaritzburg High Court.

It was “absurd and lunacy at best”, Nhleko told Zondo, for anyone to suggest that an African was “a foreigner” on African soil.

“Africans, by birth on this continent of ours, are understood to be of a tree of origin in this very same land of our forebears,” Nhleko schooled Zondo.

The heart of the matter was not that he had hired a person who happened to be in the country illegally and was a fraudster to manage his office, but “what the European powers did in 1884, when they met at the Berlin Conference where they set out to divide, plunder, maim, rape and dehumanise the African person.

“All of these atrocities were committed on the basis of nothing else except that they considered themselves as being white superior human beings and that’s the matter.”

Music lover Nhleko began to quote from the lyrics of a song, “those who worship foreign gods are swallowed by them, the greatness of our land lies in the glory of our children as we fight…”, at which point Zondo interrupted the former minister.

This, Nhleko replied, was merely a “conceptual difference” between the use of the word “foreigner” and “illegal immigrant”. That aside, it appears Mbangwa has still not been granted South African citizenship.

As one of Zuma’s trusted lieutenants, Nhleko’s much-anticipated testimony got off to a slow and laborious start as legal teams talked through how to deal with the piles of files that have accumulated over the years.

The files related to various occasions or incidents in which Nhleko has been fingered, including the “Zimbabwe Rendition” matter which ultimately led to a purge of corruption-busters in IPID and the Hawks.

The Sunday Times found itself on 23 October 2011, as it did later with the SARS “rogue unit” story, a conduit for then-Crime Intelligence boss Richard Mdluli’s and the unit’s Zimbabwe Rendition narrative when it published leaked excerpts of a report, commissioned by Nhleko, from private law firm Werksmans which investigated the origin of two conflicting IPID reports into the matter.

In May 2015, City Press exposed that the original or “first” IPID report on former Hawks boss Anwa Dramat had originated entirely from within Crime Intelligence itself and an operative known as Colonel Moukangwe.

It was this involvement by Moukangwe which had later raised concerns about Mdluli’s backroom role in allegedly setting up the Zimbabwean Rendition matter in order to purge the Hawks.

Mdluli was being investigated at the time by the Hawks for the alleged looting of the Crime Intelligence slush fund.

Evidence leader Garth Hulley on Monday referred to the mysterious Moukangwe investigation which had originally been sent to IPID in 2012 by the then-minister of police, Nathi Mthethwa. At the time Koekie Mbeki had been the acting executive director of IPID.

Kuba had, unusually, been tasked at the time with working with Moukangwe and to report his findings to Crime Intelligence and the NPA’s advocate Anthony Mosing, instead of to IPID’s head of investigations, Matthews Sesoko.

In September 2018, the National Prosecuting Authority confirmed that it had withdrawn the bogus Zimbabwean Rendition charge against former Hawks head, Anwa Dramat, and which saw him removed in 2014.

Dramat wrote to Nhleko after his suspension that he had been targeted as he had been investigating “dockets implicating influential people”, including Zuma, in the “Nkandla matter”.

Sibiya began investigating Mdluli in 2010 when he launched Operation uLibambe Lingashoni (Don’t Let the Sun Set) which is when Sibiya blipped on to Mdluli’s radar.

Nhleko replaced Dramat with Berning Ntlemeza, an appointment later ruled by a court to be unlawful and unconstitutional.

On Monday, Hulley also quizzed Nhleko about a “Reference Group” he had established to investigate “burning issues” in the SAPS and law enforcement. The reference group, said Hulley, was used, according to witnesses, as a “hit squad” to get rid of certain individuals.

In the end, the reference group issued three reports to Nhleko, one into the fitness for office of the then-national police commissioner, Riah Phiyega, the then-public protector, Thuli Madonsela’s “Secure in Comfort” report into Nkandla upgrades Nhleko so expertly ‘defended’, and the Zimbabwean Rendition report.

The group had, however, never considered one of the most pressing issues, the long-term fully paid suspension of Richard Mdluli, Nhleko admitted.

Nhleko told the commission that he had personally directed which issues needed to be investigated and that while the Mdluli matter might have been one the group should have investigated, it did not do so.

On that matter Nhleko passed the buck, saying it was Phiyega’s job to investigate Mdluli.

As minister of police, said Nhleko, he had “never had clarity about why he is on suspension, what are the issues there. It was something that we never got around to look at.”

Mdluli finally faced charges in August 2019 and was found guilty in the Johannesburg High Court of kidnapping and assault.

Nhleko told the Zondo commission that with regard to the “Zimbabwe Rendition”, the Reference Group had found that there were two conflicting IPID reports which is why Werksmans had been commissioned to investigate this.

The Reference Group’s report on 22 November 2014 was, said Nhleko, “more of an assessment” of the entire rendition issue and did not look specifically into the matter of two different reports and sets of findings.

The commission will resume on Tuesday 28 July. DM