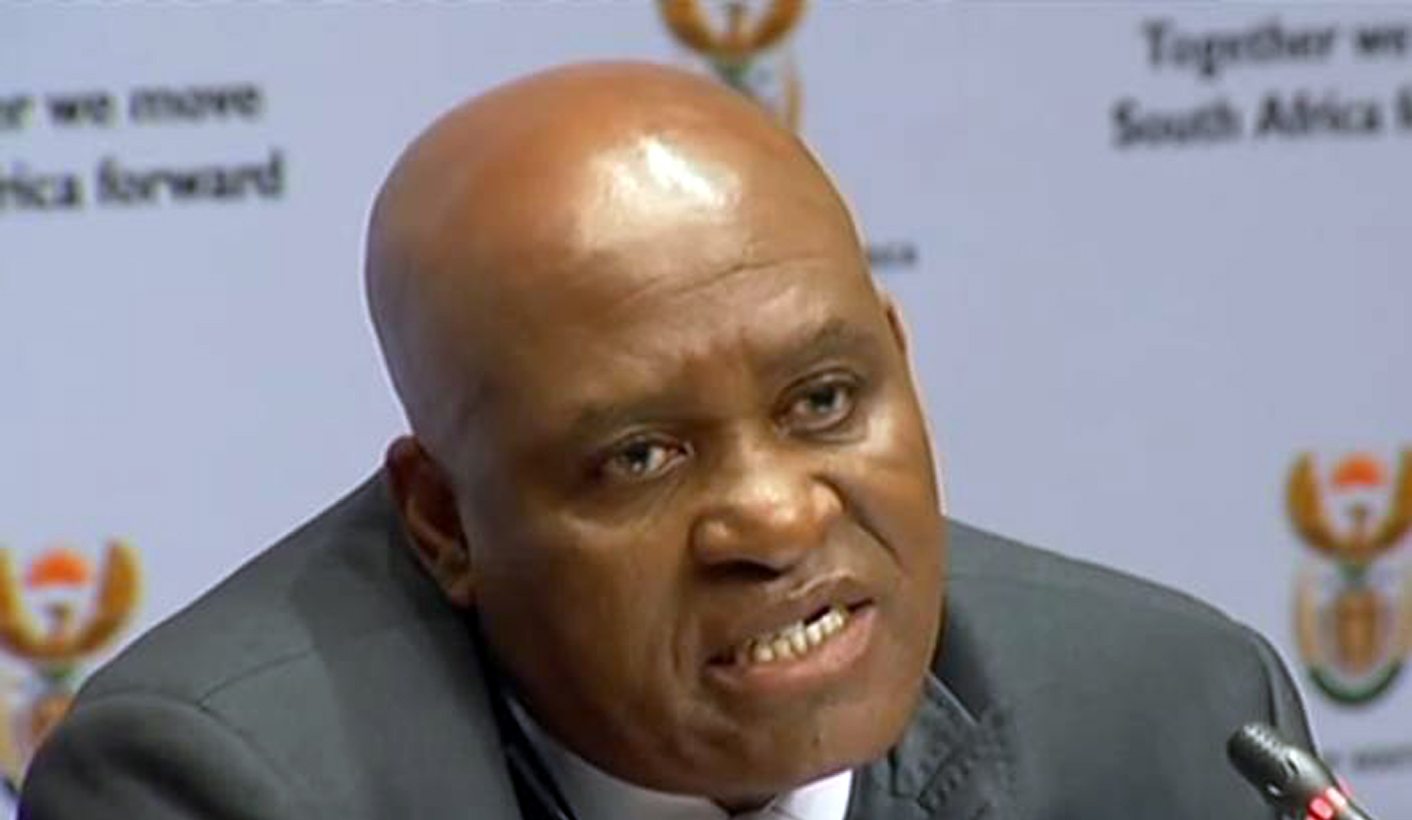 One controversial chapter in the SA Police Service has been closed with the departure of former Hawks boss Lieutenant-General Mthandazo Ntlemeza. Police Minister Fikile Mbalula on Tuesday announced the general was now “retired” following a failed bid in the Supreme Court of Appeals (SCA) to be allowed to appeal an earlier judgment that found his appointment unlawful and invalid. But Ntlemeza’s retirement comes with a financial penalty – he has to “personally pay” legal fees according to the court’s cost order and will get his police pension pegged at the lower rank held before his invalid promotion to Hawks head. By MARIANNE MERTEN.

Mthandazo Ntlemeza’s appointment two years ago to head the Hawks, officially the Directorate for Priority Crimes Investigation(DPCI), was steeped in controversy from the outset. It came amid internecine police politicking that saw a number of suspensions challenged in court, and followed the departure of then Hawks boss Anwa Dramat, who after being suspended in December 2014 over the rendition of Zimbabweans six years earlier, resigned in April 2015. A subsequent parliamentary reply from the police ministry confirmed a settlement of R3,109,029.80 to Dramat.

Six months before Ntlemeza’s September 2015 appointment, the Gauteng North High Court in Pretoria found the police general “lacking in integrity” and “biased and dishonest” in one of the court cases related to this SAPS office politics.

That matter was ventilated before the interviewing panel that included the ministers of justice, state security and deputy police minister, as during the announcement of his appointment it emerged Ntlemeza had submitted a memorandum on the matter, confirming he was a fit and proper person to be appointed. The court’s view of Ntlemeza’s character proved no obstacle to appointment.

And so when then Police Minister Nkosinathi Nhleko announced Ntlemeza as the new Hawks boss, the minister stood by his man, saying the judge had merely expressed an opinion, not made a ruling. This sentiment would be repeated in later months.

Nhleko continued to stand by Ntlemeza, even when it emerged the Hawks head had been in direct contact with State Security Minister David Mahlobo, according to City Press, writing him an “information note”, with regards to the Hawks investigation of the South African Revenue Service (SARS) so-called “rogue unit”, and the 27 questions the Hawks had sent to then Finance Minister Pravin Gordhan. It was all part of the “Brooklyn CAS 427/5/2015”, laid by SARS Commissioner Tom Moyane in May 2015.

Asked about this information note during a March 2016 joint media briefing at Parliament, Nhleko turned to Mahlobo and quipped his fellow minister “should be investigated” for “encroaching” on his police turf. That was it. Questions regarding the Hawks’s so-called rogue unit investigations were sidestepped then.

Instead, the Hawks subsequently charged Gordhan with fraud over an early pension payout for a top official during his time at the helm of SARS. The trial was aborted at the last minute after it emerged the in-house legal opinion held there was nothing untoward in this. And the spotlight fell on the Hawks for having failed to discover this, but then holding the SARS official central to this against his will.

Ntlemeza stayed on in his job even as in March 2017 a full Bench of the Gauteng North High Court ruled his appointment unlawful and invalid in a challenge brought by civil society organisations Freedom Under Law and the Helen Suzman Foundation. This judgment also upheld Judge Elias Matojane’s characterisation of Ntlemeza as dishonest and untrustworthy. Subsequently, it was indicated this ruling would be appealed.

But in President Jacob Zuma’s midnight Cabinet reshuffle at the end of March 2017, Nhleko was moved to the public works portfolio. And newly minted Police Minister Fikile Mbalula wasted little time to announce in mid-April that Ntlemeza was out.

It wasn’t quite as straightforward as Mbalula might have hoped. Ntlemeza, citing an appeal against the ruling that effectively booted him from his job, insisted he could return to work. And it took a little time for him to return his tools of trade, even as his acting successor, Lieutenant-General Yolisa Matakata, took office.

It appears the court challenge never really took off properly. The SCA in its ruling on 15 September indicated it could not condone the non-compliance with the rules of the court.

“The application for leave to appeal is dismissed with costs, to be paid by the applicant personally, on the grounds that there is no reasonable prospect of success on appeal and there is no other compelling reason why an appeal should be heard,” the SCA ruled. As far as judges’ legal language goes, this is not mincing words. Finish and klaar.

For Mbalula, it is an important decision if his aim is to resolve politicking within the SAPS. Not only did he replace Ntlemeza with an acting incumbent in April this year, in June he replaced then acting national police commissioner Lieutenant-General Khomotso Phahlane, under investigation by police watchdog Independent Police Investigative Directorate (Ipid) for corruption and dodgy tenders. Although Phahlane was told to return to his previous post at forensics, he was also asked to provide reasons why he should not be suspended. Effectively this removed Phahlane from the SAPS, even as disciplinary hearings or other steps are yet to be finalised.

Asked for comment, both the Hawks and SAPS head office indicated the matter was being dealt with by the minister.

Mbalula in a statement said he would not appeal the SCA ruling. “Upon studying and interpretation of the court order, it is conclusive that General Ntlemeza’s appointment as the head of DPCI (Hawks) has been nullified and declared unlawful,” explained the police minister. Pointing out the South Africa Police Act sets mandatory retirement at age 60, he announced his instruction to the SAPS to processing Ntlemeza’s retirement with immediate effect “but at a level of major-general and not as a lieutenant-general he was promoted to upon his now defunct appointment.”