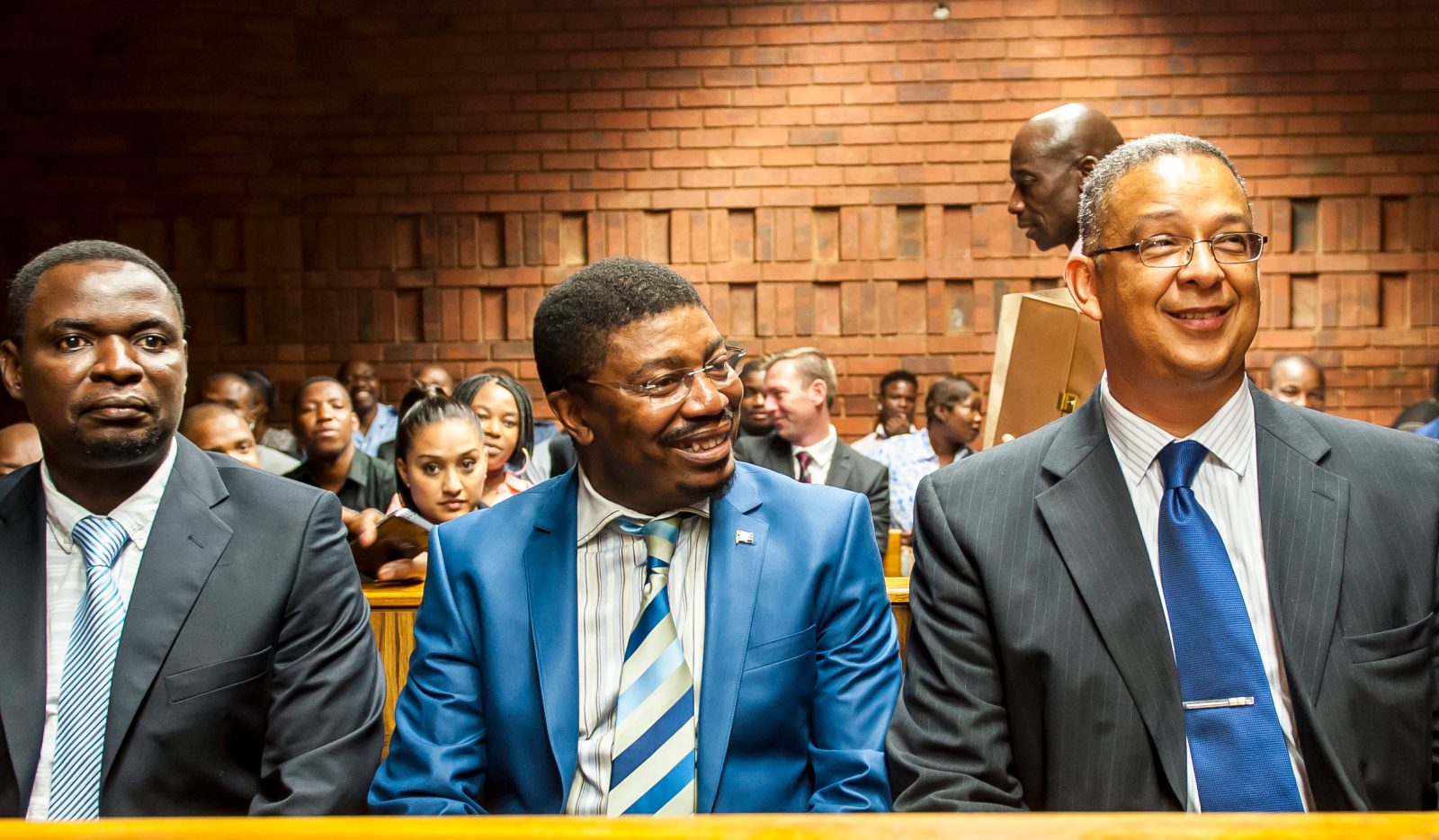 Archive Photo: Thens Suspended Independent Police Investigative Directorate (Ipid) boss Robert McBride and his co-accused, Matthew Sesoko and Innocent Khuba during their appearance at the Pretoria Magistrate Court on March 16, 2016 in Pretoria, South Africa. McBride, Sesoko and Khuba are being investigated by the Hawks for fraud. (Photo by Gallo Images / Beeld / Lisa Hnatowicz)

Police watchdog IPID's Limpopo boss has told the State Capture Commission how he suffered while former police minister Nkosinathi Nhleko and former Hawks leader Berning Ntlemeza allegedly pressured him to turn on his colleagues, including Robert McBride, during the height of State Capture.

Former police minister Nkosinathi Nhleko and former Hawks boss Berning Ntlemeza allegedly attempted to persuade a top Independent Police Investigative Directorate (IPID) investigator to implicate his colleagues in an investigation into the police watchdog’s report on the rendition of Zimbabweans in 2010, the State Capture Inquiry heard on Friday.

The issue revolves around IPID’s investigation into the alleged illegal rendition of Zimbabweans in 2010 and the involvement of the Hawks leadership. Khuba initially suggested to the NPA that there was sufficient evidence to charge then Hawks boss Anwa Dramat and Gauteng Hawks leader Shadrack Sibiya.

After McBride was appointed to lead IPID, he told Sesoko and Khuba to review the case and they ultimately found Dramat and Sibiya, who were both respected investigators working in a time of State Capture, should not be charged.

Nhleko had the Hawks leaders in his sights and called for an investigation into why the recommendation was changed, suggesting McBride and Sesoko had ordered Khuba to exonerate Dramat and Sibiya.

Khuba claimed that weeks before McBride was suspended in March 2015, Nhleko’s assistant called him requesting that he come to Cape Town to meet the minister. When Khuba said he needed to tell his boss, McBride, the assistant allegedly responded that “McBride would never know”.

Khuba told the commission that the next day Nhleko himself called and told him to co-operate with the inquiry into the change in reports that he had hired Werksmans Attorneys to conduct.

“For me it was very unusual because politicians will normally not communicate with the staff. They may communicate with heads of department because they report direct to them. So I felt that probably he wanted me to do something without Mr McBride knowing,” said Khuba.

Khuba said Kgamanyane told him to meet Advocate William Mokhari SC at his chambers, where the advocate asked him to write an affidavit supporting Nhleko’s position on the rendition report.

“The version is that McBride influenced me to alter the report, the report was deleted to suite the recommendation that the NPA cannot charge Dramat and Sibiya,” said Khuba.

He refused to lie and support what he perceived as the minister’s position.

About two months after McBride’s 2015 suspension, Khuba received a call to say he too was being suspended. The official serving his notice said she would drive from Pretoria to Limpopo that afternoon because Nhleko allegedly wanted the suspension served urgently. Zondo asked why the minister may have been involved.

“I’m not really sure, but seeing previously I had received a call from the minister probably the acting executive director was just being… ” he trailed off.

Zondo asked: “Was just an instrument?”

“Was just an instrument to achieve that goal,” said Khuba.

During his IPID disciplinary hearing, Khuba did not want to admit to the charges of dishonesty and defeating the ends of justice but a deal was eventually reached where he would still be able to keep his job if he admitted to the serious charges.

He said he had no other options. He had been told by an official that his fate had already been decided and IPID had hired top lawyers – Mokhari and Advocate Tembeka Ngcukaitobi – to lead the charge against him. He said he refused to implicate McBride and Sesoko in his admission.

A media report, however, suggested Khuba had implicated Sesoko so the Limpopo IPID head decided to author an affidavit saying Sesoko hadn’t done anything wrong.

Acting executive director Kgamanyane allegedly called Khuba to ask why he deposed the statement. He said it’s because it’s the truth. He then got a letter requesting him to explain why he shouldn’t be dismissed.

“It seemed as if my mind was separated from my body,” said Khuba about the moment he found out that he was dismissed, which he believes was without fair process, because of his affidavit supporting Sesoko.

“The truth of the matter is that they were using me to say how can they turn me against McBride and Mr Sesoko and when it backfired now they play this strict employer, why did you depose this statement?” added Khuba.

Days after his dismissal, two Hawks officers came to his house and tried to convince him to implicate McBride and Sesoko, said Khuba on Friday. He said the officers claimed to have been sent by Ntlemeza, who by then was running the Hawks and was an old friend. They allegedly told Khuba to remember who was his friend, Ntlemeza, and his enemies, which they suggested were McBride and Sesoko.

Khuba was eventually charged alongside McBride and Sesoko for defeating the ends of justice and fraud and decided to put his whole story in his warning statement. The three were arrested but the charges were later dropped.

Khuba took IPID to the Labour Court and was eventually reinstated with back-pay.

On Friday Zondo requested that the Commission’s evidence leaders get further statements from McBride, Ntlemeza, Nhleko, Werksmans Attorneys and others implicated in Khuba’s testimony.