Tracking Covid-19 Lockdown demolitions: City of Cape Town says it has a right to protect its property 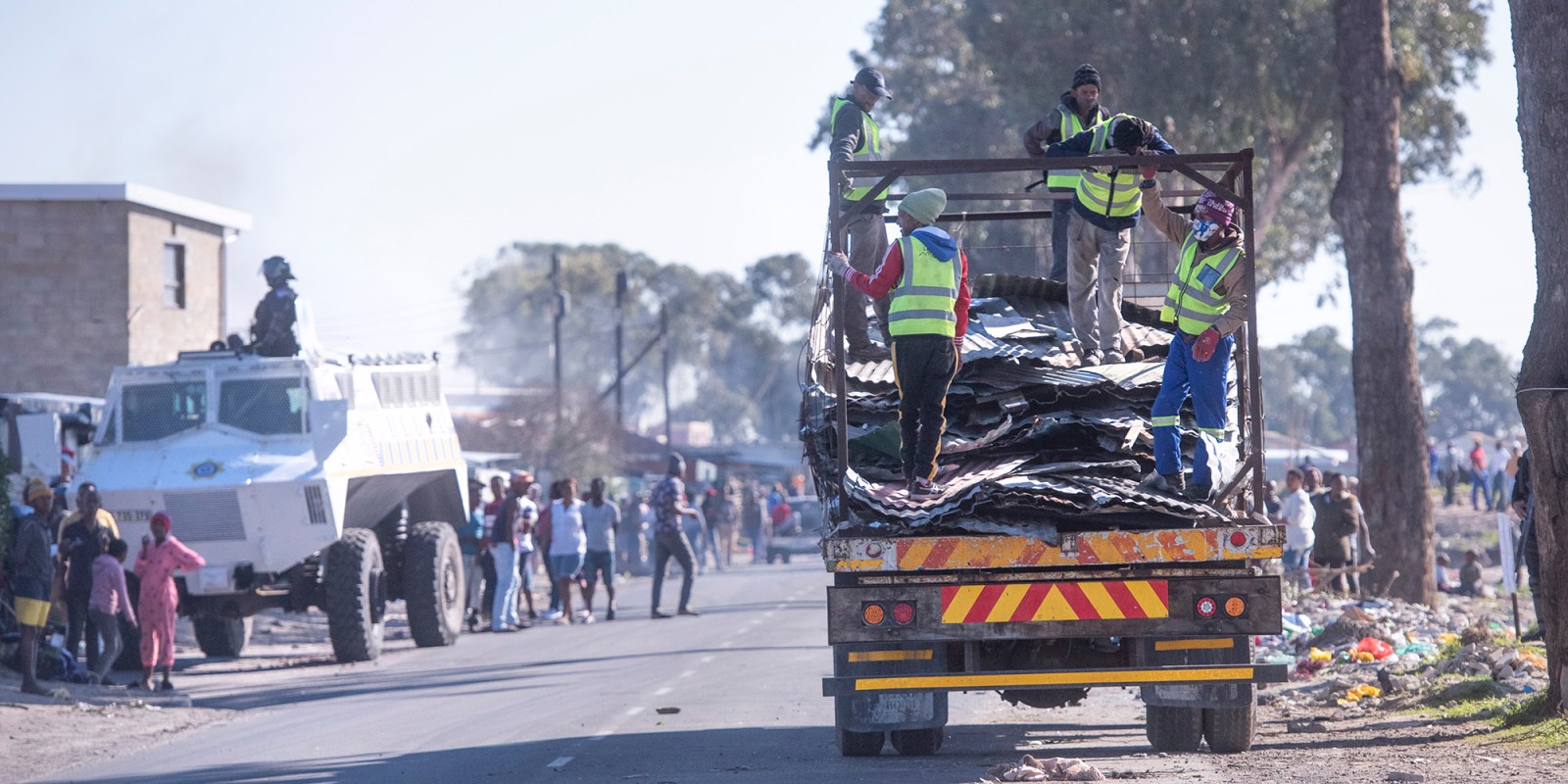 The City of Cape Town has come under fire over the past few weeks for demolishing occupied structures in what it calls ‘anti-land invasion operations’. The demolitions bring to the fore the ongoing housing crisis in Cape Town.

After the video of a naked Bulelani Qolani being dragged out of his home by the Anti-Land Invasion Unit went viral and caused outrage, the City of Cape Town was asked by the Cogta committee to explain why it was evicting people despite a moratorium on evictions.

“We understand the City’s constitutional obligation to enforce its bylaws. What we are condemning is the distasteful manner in which the city’s law enforcement officials carry out the evictions,” Cogta chairperson Faith Muthambi told the City at the meeting.

Cape Town Mayor Dan Plato repeated his previous response when asked about evictions: these are not evictions but anti-land invasion operations. 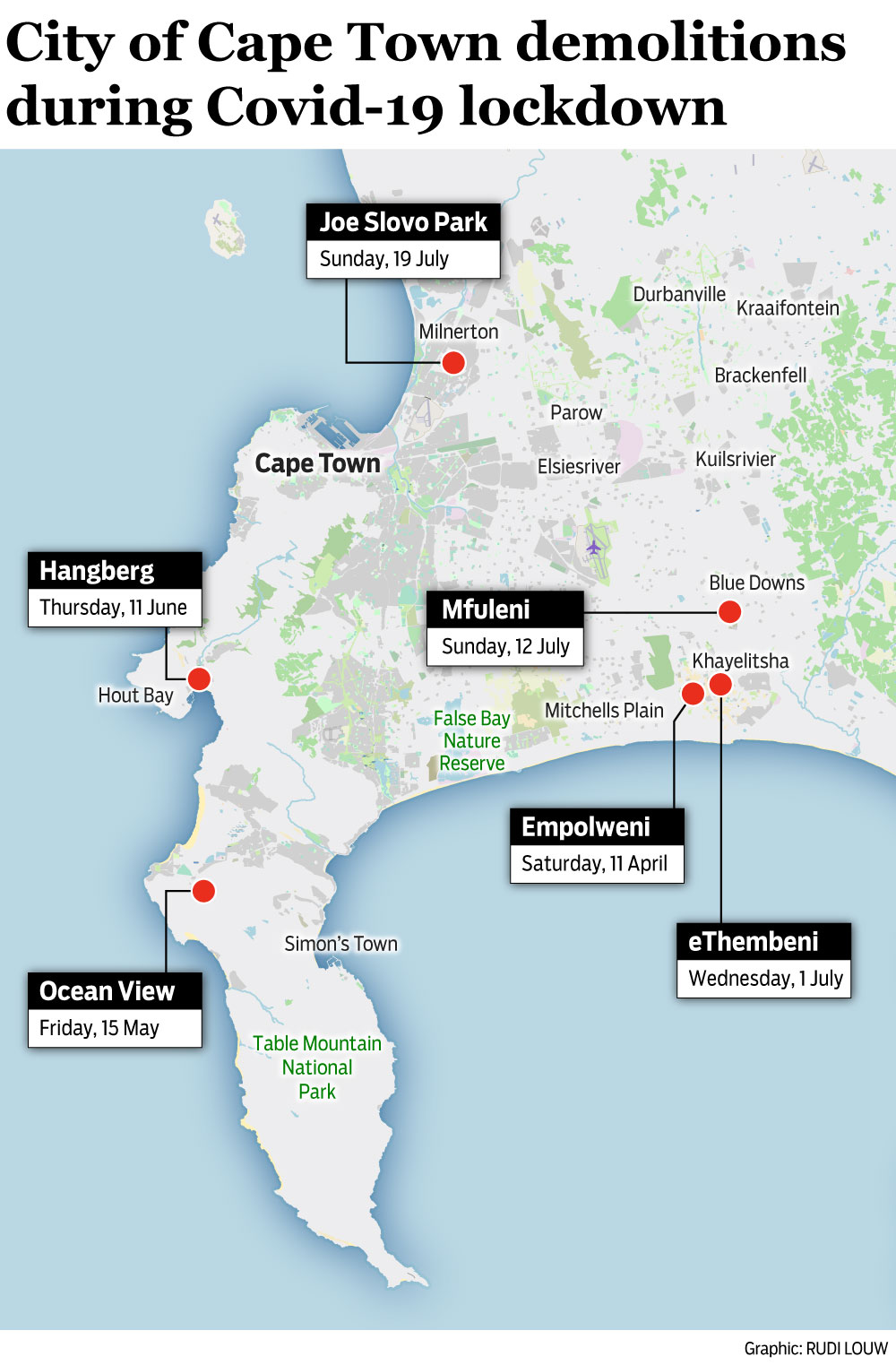 The City’s side of the story

In a statement, Malusi Booi, the mayoral committee member for human settlements, said that, “From 2018 to date, 358 hectares of private and public land has been invaded in the City of Cape Town alone.”

Booi said the City had every right to protect its land because land invasions halt development plans. He added that with municipalities working with tight budgets, this brings extra pressure as they need to divert funds to provide basic services for newly formed informal settlements.

However, “Operations to prevent the illegal occupation of land have been conducted within the legal parameters of counter spoliation, trespass orders or interdicts.”

Booi said there were “currently large-scale, orchestrated invasions happening in parts of the metro”.

The City said many people were illegally occupying land because of loss of income, due to businesses closing down during lockdown, which has resulted in many backyard dwellers being evicted.

“It must be noted [that] this is illegal. Landlords may not evict tenants for non-payment during the lockdown period,” said Booi.

With nowhere to go, backyard dwellers were occupying vacant land and in many instances, they faced removal by the Anti-Land Invasion Unit (ALIU). An anti-land invasion operation does not require a court order.

However, if the officials find that the structure is unoccupied, the structure can be demolished. If an occupant believes the City wrongly destroyed their home, they can approach the courts for relief.

During a Cogta committee meeting in June, when the City was asked about evictions in Hout Bay, Deputy Mayor Ian Neilson said there were no evictions, just the removal of unoccupied and/or incomplete structures.

Phillips’ wendy house was demolished twice, first on 11 June then again on 19 June.

Maverick Citizen’s Vincent Cruywagen reported that, “Salie-Hlophe described the City’s action as deplorable and inhumane, adding the demolition was heartless and done with scant regard for Phillips’ safety, security and health, particularly in light of the Covid-19 pandemic.”

Plato said that rebuilding Phillips’ wendy house would halt the planned development of a recreational facility.

On 11 April, structures were demolished in Empolweni, on City-owned land. The Empolweni residents, represented by the Legal Resources Centre (LRC), asked the Western Cape High Court to declare the demolition and the removal of residents’ building materials and belongings as unlawful and unconstitutional.

Judge Bryan Hack ordered the City to return all the building materials that were removed from Empolweni. The applicants were allowed to rebuild and occupy 49 structures on the land. Hack also ordered the applications to “use their best endeavours to ensure that the number of structures do not increase”.

When structures were demolished on 1 July in eThembeni, near Empolweni, the City said it could not afford to lose that piece of land because it would jeopardise development projects, particularly the R162-million water pipeline the City plans to install in Khayelitsha.

In Ocean View, 10 structures were demolished in May, two months into lockdown, said Bernadette Rossouw, whose structure was demolished.

Rossouw told Daily Maverick that this was not the first time this year their structures had been demolished:

“I’ve been staying on that land since January with my four kids, and we’ve had our structures demolished at least four times.”

The land that Roussouw lives on, together with about eight families, comprises 15 hectares and belongs to a development trust, said Rossouw.

Residents from Empolweni, eThembeni and Ocean View whose structures have been demolished are being represented by the LRC in a matter that will be heard on Friday 24 July.

The LRC and the South African Human Rights Commission are seeking to interdict the City from removing what the City calls “land occupiers” from City-owned land.

On Sunday 19 July, illegal structures that had been erected on City-owned land the day before were demolished, said a Joe Slovo resident who didn’t want to be named for fear of retaliation.

“I was not part of the land invasion, but most of the people who occupied that piece of land have shacks elsewhere. That occupation was done with the wrong intentions,” said the resident.

The City’s Malusi Booi has previously said that in some land occupations there “is likely a situation of political and other opportunism”.

In Mfuleni there was a massive land occupation as people from Khayelitsha, Nyanga and nearby informal settlements were looking for vacant, dry land after their shacks were flooded after the storms in the second week of July.

Some of the land that was occupied was City-owned, while other parts belonged to Cape Nature. Structures were demolished on Sunday 12 July.

“People are not allowed to move into another person’s house, flat, on to another person or public institution’s piece of land that does not belong to them. Invading someone else’s property is illegal in South Africa. This goes for state- and City-owned land too,” said Booi.

He added that anti-land invasions are done to “try to reduce the harm to the people because they are the ones that are most affected by fires and flooding and health and safety impacts, because often they settle on land not suitable for housing, such as on wetlands, flood plains, under power lines or on garbage dumps.”

While the City is adamant it is carrying out anti-land operations and not evictions, Buhle Booi, a political organiser from Ndifuna Ukwazi, an organisation with a focus on urban land justice and affordable housing, said:

“There isn’t a difference between evictions and anti-land operations. They’re just trying to be smart.”

Booi said, “Land occupations are based on need, people aren’t doing it for fun.”

In the past week, Malusi Booi said, there had been at least 17 land invasions in the City.

“One of the issues is… of backyarders,” said Aditya Kumar, the executive director of the Development Action Group, an NGO that advocates for affordable housing, land and tenure security.

“Many of the private landlords have been evicting their tenants, rendering them homeless. Many of the backyarders, as a consequence, have been invading land and this is not just in Khayelitsha and Mfuleni, but it’s also happening in places like Gugulethu, Philippi and Langa, where lots of backyarders are being rendered homeless.”

The other issue is that people also rent in informal settlements. With the loss of income for many families, the only alternative for housing was to invade, said Kumar.

But Kumar agrees with the City that invasion of land can significantly hamper future development projects.

“It does divert very scarce resources to service those particular informal settlements, but, at the same time, these people don’t have any other avenues to housing,” said Kumar.

The ANC caucus in the City has condemned the illegal occupation of land.

“We are disturbed by these developments as some of these pieces of land are earmarked for development and building houses. As much as we acknowledge the right of people to protest… we are against the criminal elements,” said ANC caucus spokesperson Fiona Abrahams.

A month ago, Plato wrote a letter to President Cyril Ramaphosa requesting an urgent meeting to discuss land invasions and homelessness in the City. DM