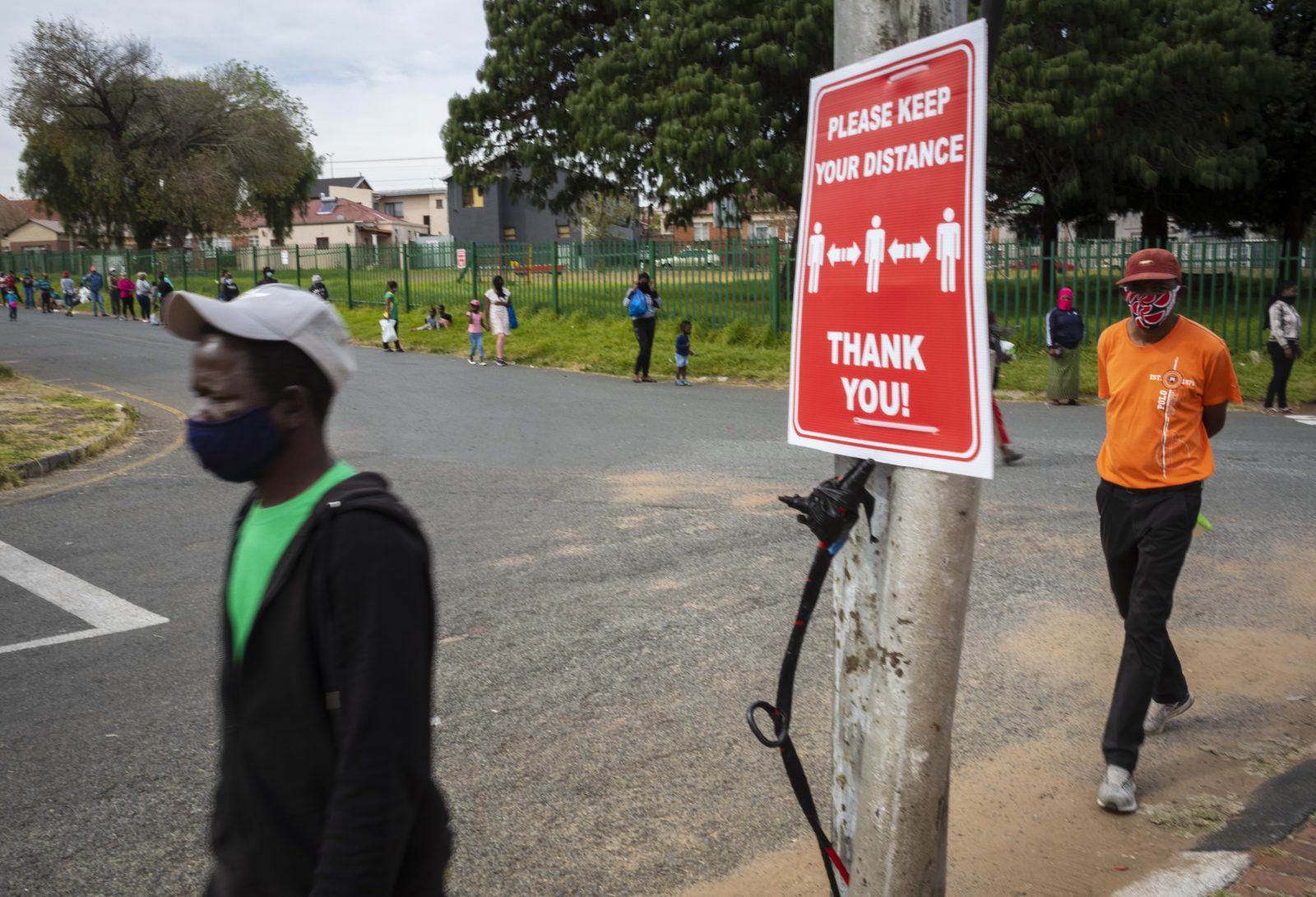 Residents wait for food handouts from the Hunger Has No Religion group in Johannesburg. (Photo: EPA-EFE / Kim Ludbrook)

On Wednesday, the Eastern Cape premier asked President Cyril Ramaphosa to deploy the SANDF Medical Corps to help the province. Meanwhile, Gauteng reported its highest increase in coronavirus cases in a day. The courts dismissed an application to close schools again, but allowed Cogta Minister Nkosazana Dlamini Zuma to appeal against a blanket declaration of the invalidity of lockdown regulations.

Follow
Save
Covid-19 in South Africa
Infogram
Scroll through the gallery below to view the latest Covid-19 numbers available on 1 July at the district level. All maps are sourced from provincial health departments; however, KwaZulu-Natal and Mpumalanga did not provide an update by the time of publishing: 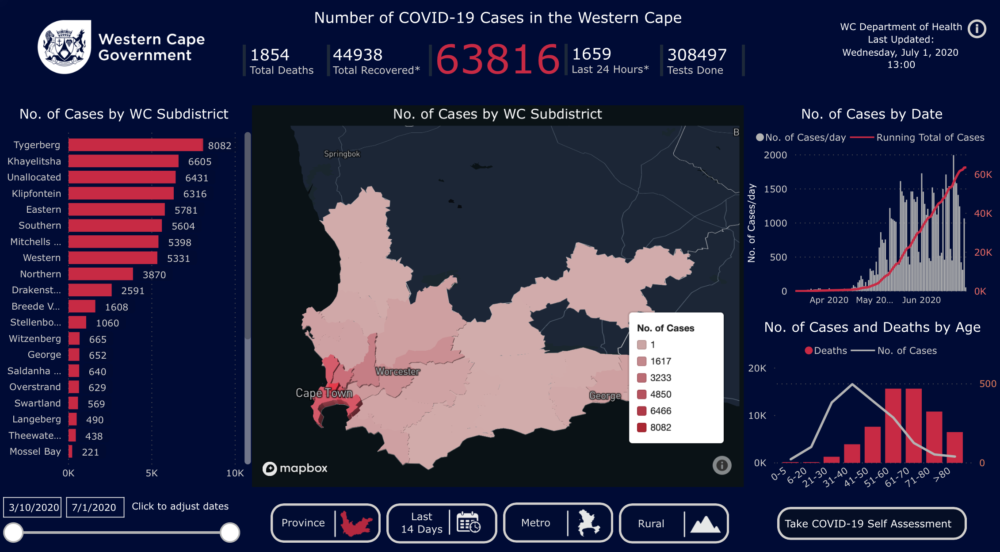 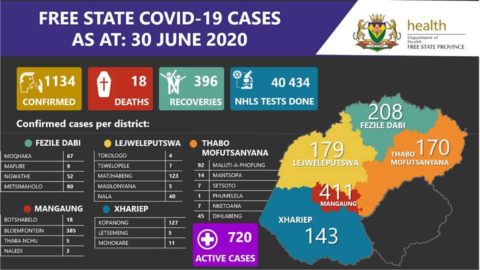 The Eastern Cape’s health system “has been overwhelmed” by the pandemic, the province’s Premier Oscar Mabuyane said on Wednesday. The admission came as he asked President Cyril Ramaphosa to deploy the South African National Defence Force’s Medical Corps to help the province.

The province’s Department of Health has admitted that several patients in East London and Nelson Mandela Bay were abandoned by healthcare workers who refused to work. It said it will start reporting healthcare workers who stay away without a good reason. In addition, the number of deaths is climbing in six of the province’s eight districts. The department has committed to building eight more field hospitals and re-engineering others.

As Estelle Ellis reports, Gift of the Givers has at the same time offered the province two of its ambulances and deployed six nurses to help with testing.

Health Minister Zweli Mkhize’s prediction has come true: Gauteng is now the epicentre of South Africa’s Covid-19 outbreak. On Wednesday, the country’s smallest province reported 2,946 new cases and 36 deaths – its highest yet. As Ferial Haffajee reports, doctors in the province have reported that hospitals are starting to fill up, oxygen supply is running low and the testing system is under pressure.

Unfair labour practices and the poor treatment of healthcare workers had damaged the quality of healthcare, leaving it unable to weather shocks such as the Covid-19 pandemic, says a new report by Oxfam South Africa and the Young Nurses Indaba Trade Union. According to the report, black women bear the brunt of these conditions as they are overworked and underpaid. As Sandisiwe Shoba reports, the coalition has launched the #Care4Carers campaign to show solidarity with healthcare workers and campaign for a more just healthcare system.

There are just 10 days allowed for Cooperative Governance and. Traditional Affairs Minister Nkosazana Dlamini Zuma to amend lockdown regulations which have been found to be irrational. However, she can appeal against the blanket declaration that lockdown regulations are invalid, according to a judgment handed down on Tuesday.

Meanwhile, the Pretoria High Court has dismissed an application by Mmusi Maimane and the One South Africa Movement to have schools closed again. The judgment read that the court was content with government’s plans to keep schools safe from Covid-19.

Nomandla Yako, “the HIV/Aids activist who planted hope”, died at Groote Schuur Hospital on 28 June from organ failure due to a Covid-19 infection. On Wednesday, Ufrieda Ho paid tribute to Yako, one of the first volunteer educators to join the Treatment Action Campaign who remained a community activist her entire life. Whether campaigning for access to ARVs or counselling at Red Cross Children’s Hospital, she was “calm, kind and humble” – but militant and mischievous too.

The Cape Town Philharmonic Orchestra has been forced to cancel its autumn and winter seasons. In the meantime, musicians are making videos of their performances to share with an online audience. Tiara Walters spoke to Bernhard Gueller, the orchestra’s principal guest conductor, about the future of physical concerts and the experience of performing for an online audience.

The Solidarity Cup is now scheduled for Mandela Day, 18 July, according to Cricket South Africa. The match will be the debut for the federation’s new format, Three Team Cricket, and is a chance for players to prepare for a possible return to international cricket. As Yanga Sibembe writes, the match has been in limbo since it was paused when the minister of sports, arts and culture said last month that it had not yet been approved.

This comes as the men’s edition of the Africa Cup of Nations has been postponed from 2021 to 2022 because of Covid-19. The women’s edition has been cancelled because of “challenging conditions”. Yanga Sibembe reports that the postponement means African countries will play two major tournaments that year – 2022 is also World Cup time. The African Nations Championship has been pushed from 2020 to 2021. DM